Unlocking the quantum world to surpass the limits of the present 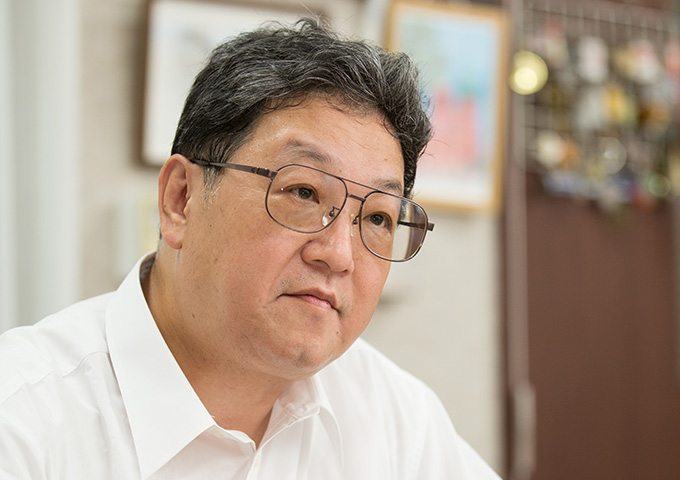 What is quantum science and technology? And why now? Interview with Nobuyuki Iwatsuki, Dean of the School of Engineering

What is quantum science and technology? And why now?
Interview with Nobuyuki Iwatsuki, Dean of the School of Engineering

Iwatsuki: Covering the properties of both particles and waves, a quantum is a very small unit of matter or energy. In terms of matter, the main players are atoms and the smaller particles that make up atoms: electrons, neutrons, and protons. Photons and elementary particles such as neutrinos, quarks, and muons are also quanta. 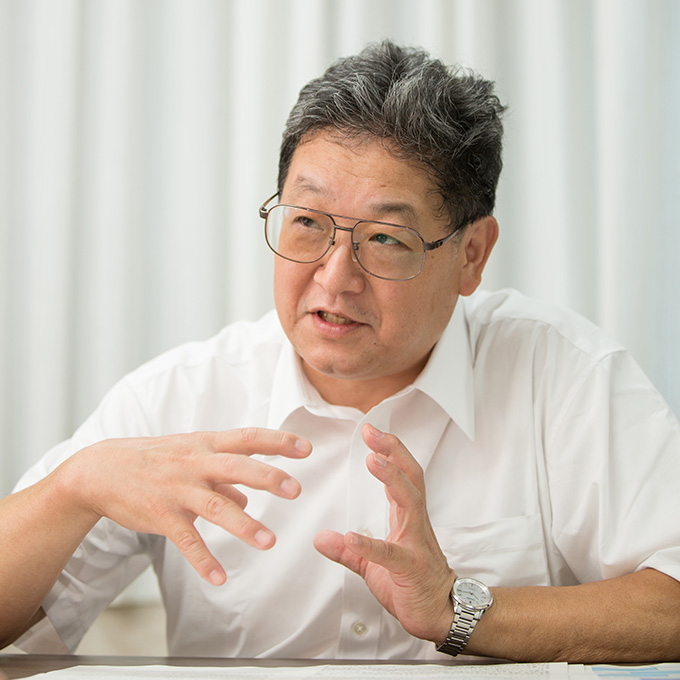 Dean of the School of Engineering, Nobuyuki Iwatsuki

The quantum world defines properties at the nano-scale (1x10-9 m) or smaller. In such an extremely small world, Newtonian mechanics1 does not apply. Instead, it is ruled by these curious laws of quantum mechanics. Quantum mechanics was developed about 100 years ago. It had a significant influence not only on physics, but also on philosophy, raising questions about the meanings of matter and measurement.

Quantum science and technology is a multidisciplinary field concerned with quantum behaviors and mechanics. It not only increases our understanding of nature, but it also allows us to influence phenomena at the quantum level. This ability will lead to the improvement of people's quality of life and the advancement of society as a whole. Micro-focused technology has seen rapid and widespread growth over the past 10 years, and this has been a major factor in increasing the momentum to promote quantum science and technology.

What can quantum science and technology achieve that existing methods cannot?

Harnessing quantum behaviors could provide advances in various areas, including information transmission, medical care, the environment, and energy. They could address issues regarding accuracy, sensitivity, capacity, energy conservation, and security. These advances would reach well beyond the limits of existing technology, supporting our future social and industrial infrastructures.

Can you give us some specific examples of applications?

Quantum information processing involves quantum computers and simulations. If quantum computers can be brought into practical use in the next five to ten years, we will see dramatic improvements in both quality and quantity far beyond what current technology can achieve. Reduction of environmental load to ease traffic congestion, decreased costs through shipping automation at plants and storehouses, and renewable energy through high-efficiency solar panels.

Quantum measurement and sensing focuses on development of quantum sensors. For example, they could allow us to measure bioelectric signals non-invasively and at room temperature (unlike MRI, which requires helium cooling). They could be used to detect magnetic field changes related to heartbeat and electrical activity in the brain. We may be able to develop a portable sensor to measure human thought in real time, or sensors that are highly sensitive, compact, and energy-efficient. They could be used to acquire big data for use in the internet of things (IoT5), which is essential to our goal of realizing a super smart society6.

Ultrashort pulse lasers are lasers with pulse widths measuring tens of attoseconds (10-18 s). This technology may allow us to observe electronic states and to better understand chemical reactions and physical properties. This would contribute greatly to drug discovery.

Next-generation laser processing is an aim to develop one-stop technology that is both accurate and economical. That could revolutionize manufacturing and distribution systems.

Classical scientific and technological methods (simulations, measurements, and controls) have limitations. Therefore, we develop novel methods and expand quantum science and technology to clarify the behaviors of substances at the electron level and solve discontinuous problems.
Adapted from the MEXT Report on New Policy to Promote Quantum Science and Technology (Photonic and Quantum Technologies)

What are Tokyo Tech's strengths in terms of quantum science and technology? 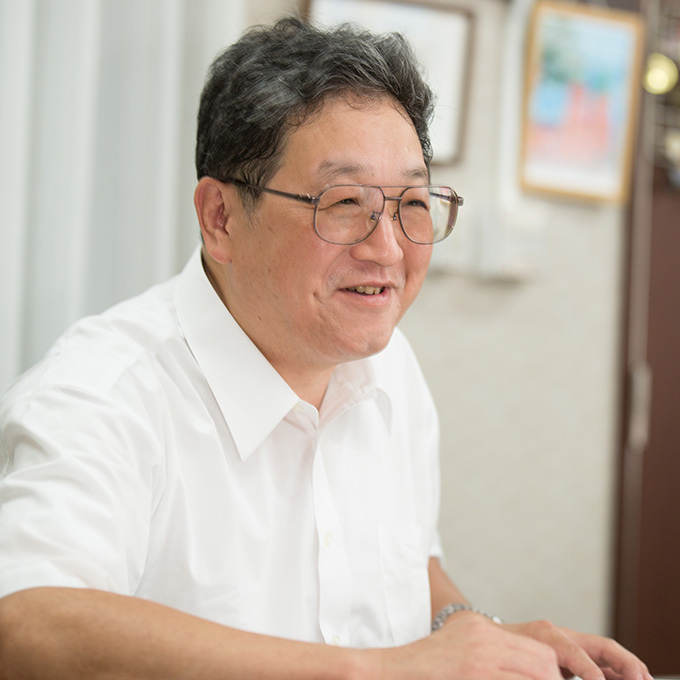 In one example, the "quantum annealing machine" commercialized by a venture company in Canada in 2011 was adopted by Google and NASA. The basic principle of this quantum annealing was established in 1998 by Professor Hidetoshi Nishimori at the Institute of Innovative Research. Professor Shinya Koshihara at the School of Science received the Humboldt Research Award for the development of novel materials utilizing a quantum beam. Professor Mutsuko Hatano and Associate Professor Takayuki Iwasaki at the School of Engineering are engaged in research on solid quantum sensors, and Professor Mikio Kozuma at the School of Science is working on quantum simulation and quantum inertial sensors using cold atoms. This is the world's most advanced research for this field. Professor Kozuma is also a program manager for the JST-Mirai Program, which began in 2017. Many scientists are engaged in basic research on quantum mechanics at the School of Science.

to promote the development of quantum science and technology and advance its adoption in society in order to realize a super smart society. It is a university-wide hub organization integrating members from the School of Engineering and School of Science and other schools in Tokyo Tech. It will also bring members from a wide range of industry fields. Through this endeavor, we will identify innovative solutions to achieve sustainable development goals7, promote the realization of a super smart society, and increase overall health and longevity. 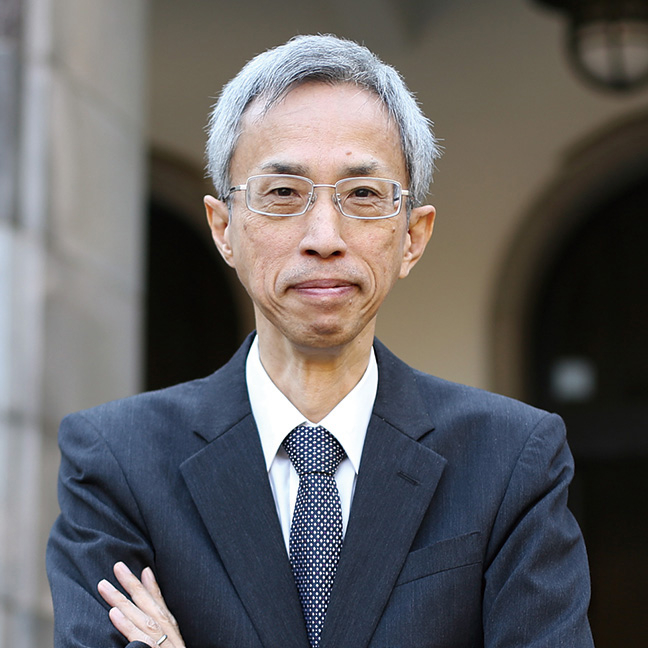 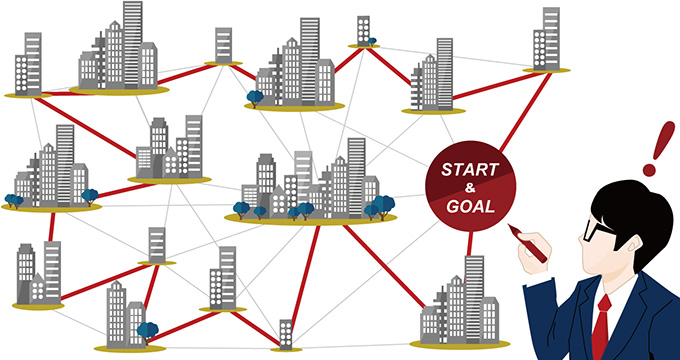 The travelling salesman problem is a well-known example used to illustrate combinatorial optimization problems. It asks the shortest possible route to visit a list of cities and return to the origin. This problem has broad applications, including determination of the shortest route in land and air travel.

On July 1, 2018, Tokyo Tech established the Quantum Computing Unit. Led by Nishimori, the Unit will promote quantum annealing research in all stages from basic theory to practical applications. 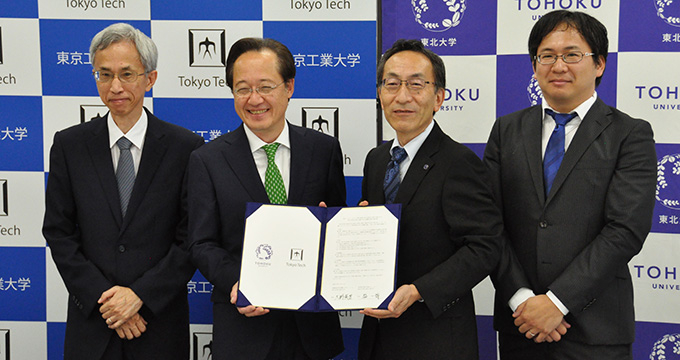 On July 18, 2018, it was further announced that the Quantum Computing Unit would collaborate in forming a research base with the Q+HPC Data-Driven Social Infrastructure Development Base, an interdisciplinary priority research institute at Tohoku University. They will also use their combined strengths to organize the Quantum Annealing Research and Development Consortium, which will include members from industry. With basic research on quantum annealing by Tokyo Tech's Quantum Computing Unit and applied research on software development by Tohoku University's development base, the two institutions are seeking to create a world-class center for quantum annealing research. 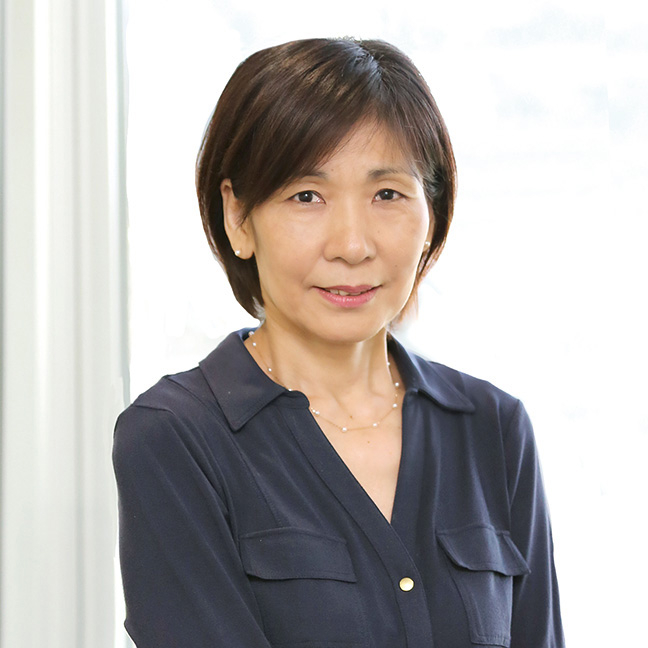 The design of her sensor involves replacing a carbon atom of diamond with a nitrogen atom. Nitrogen and the vacancy created by the removal of the carbon form a nitrogen-vacancy center (NVC). The electron spin at the NVC enters a quantum state and exhibits magnetic characteristics. These properties make it possible to create magnetic and electric field sensors that are extremely small and provide high sensitivity and high spatial resolution. This technology could be applied to miniaturize MRIs at hospitals and create IoT devices for environmental monitoring.

Tokyo Tech and the National Institutes for Quantum and Radiological Science and Technology (QST) entered into a comprehensive collaboration agreement on July 12, 2018. QST is a national research and development agency that conducts cutting-edge research and develops practical applications in the field of radiology and quantum beam science. As part of this collaboration agreement, the QST Co-Creative Laboratory for Quantum Technologies at Meguro was established at Tokyo Tech's Ookayama Campus on August 1, 2018. This laboratory is staffed by approximately 30 researchers from both organizations, including Hatano. It aims to establish new academic fields such as Quantum Life Sciences and apply solid-state quantum sensors in medical care, transportation, and social infrastructure. Hatano is also a researcher in the Quantum Leap Technologies Flagship Program (Q-LEAP), a large-scale project started in 2018 and supported by the Ministry of Education, Culture, Sports, Science and Technology. 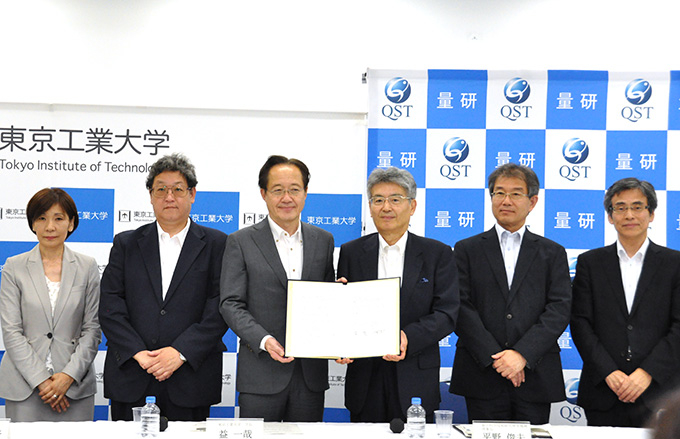 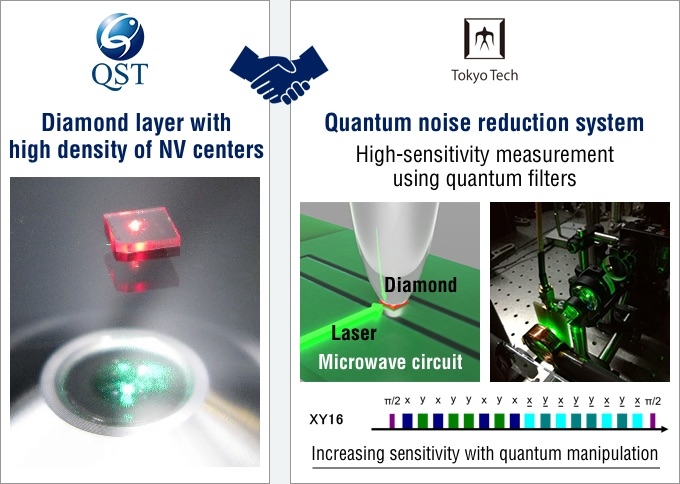 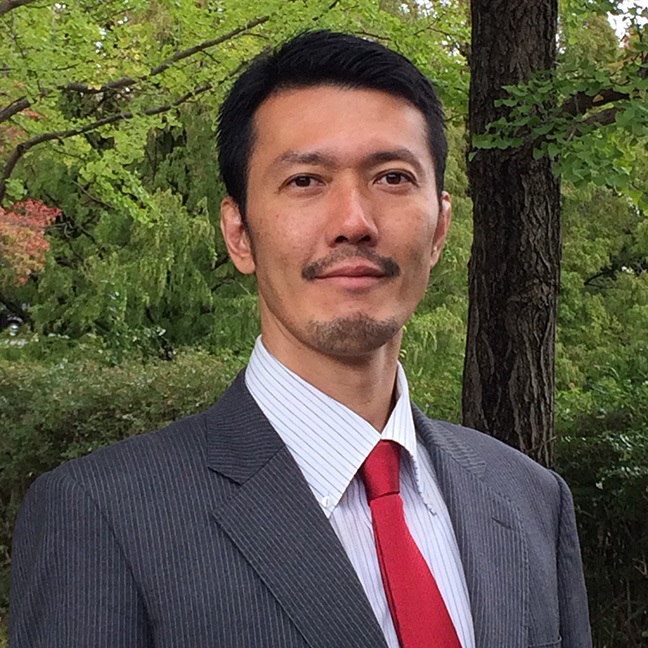 The JST-Mirai Program was launched in November 2017, and among its large-scale projects, Professor Mikio Kozuma leads a study on "Quantum inertial sensor technologies leading to innovative high precision and downsizing of self-localization units."

Accelerometers, which measure acceleration, and gyroscopes, which measure angular velocity, are referred to as inertial sensors. Displacement is acquired by double integration of accelerometer data over time (with accumulating error), and changes in angular velocity are acquired by integrating gyroscope data over time. By combining accelerometers and gyroscopes, a device can determine its location independently and without relying on external signals. This process is known as self-localization.

In Japan, the quasi-zenith satellite "Michibiki," which is capable of centimeter-level accuracy, is being readied. A lot of new industries are expected such as self-driving cars, road pricing, IT agricultural systems, surveying and construction optimization, disaster reporting, human safety confirmation, self-driving snowplows, and marine resource exploration. Self-driving cars and marine resource exploration in particular are major applications. However, the signal generated by the satellite degrades around high-rise buildings and elevated bridges, and is significantly dampened underwater. In order to realize Michibiki's wide range of applications, it is essential to supplement satellite positioning with self-localization units using inertial sensors. This can be easily understood from the fact that aircraft safety has been guaranteed by combining GPS and self-localization units.

The accuracy of self-localization systems using inertial sensors is currently limited by gyroscopes. The gyroscope with the highest performance at present is a ring laser gyroscope (RLG), which utilizes optical interference. However, the RLG does not have enough performance to realize the above-mentioned applications. By replacing the use of light waves with that of quantum waves from laser-cooled atoms (creating a de Broglie wave interferometer), Kozuma's team is working to develop a gyroscope capable of much higher performance than existing models. 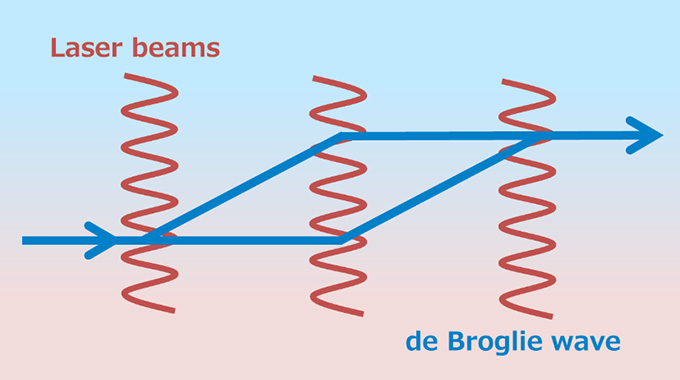 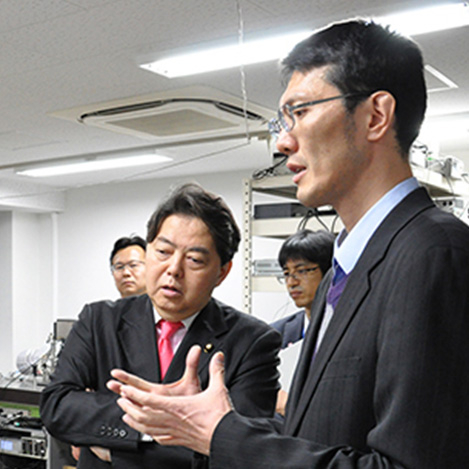 *de Broglie wave: Also called a matter wave. In quantum mechanics theory, particles with mass (m) and velocity (v) behave like a wave with a wavelength equivalent to h/mv, where h is Planck's constant

Photoinduced phase transition refers to a change in the state of materials in the blink of an eye through simple exposure to light. This phenomenon is of great interest to global researchers because it has the potential to lead to the realization of never-before-seen photoelectric devices with ultrafast and low-energy systems as alternatives to electronic devices.

Newtonian mechanics is a set of universal principles developed by British scientist Isaac Newton using the laws of motion as its foundation. It is also called classical mechanics to distinguish it from the quantum mechanics used in quantum science and technology.

The wave that describes the quantum mechanical state of a substance is a probability wave. Until the actual measurement, we only can know the probability of a state (for example, to the right or left from the surface upon which an electron exists) among multiple distinct states. Thus, a quantum state can be represented as a collection of simultaneous distinct states.

When measuring the state of a substance at the small scale where quantum mechanics are observed, one of the probable states appears. When measuring the state at a location and determining its properties, the properties of a particle a large distance away are also immediately determined. This phenomenon that links the state of particles separated by a large distance is called quantum entanglement.

IoT is the network of a wide range of devices (things) that control themselves through information exchange via the internet.

A human-oriented society capable of realizing economic growth and solving social issues through the implementation of quantum computers and AI into a system in which cyberspace (information) and physical space (the real world) are highly integrated via a communication network.

SDGs are a collection of global goals to be achieved between 2016 and 2030 that were set by the United Nations General Assembly in September 2015 and included in "Transforming our World: the 2030 Agenda for Sustainable Development." They were developed to succeed the Millennium Development Goals (MDGs) established in 2001. The SDGs include 17 goals and 169 targets intended to eradicate poverty and realize a sustainable world. SDGs are universal goals applicable not only to developed countries, but also developing countries, and the pledge that "No One is Left Behind" through the implementation process. Japan also proactively supports realization of the 2030 Agenda.
United Nations website