The Enchantment of Studying the Unknown 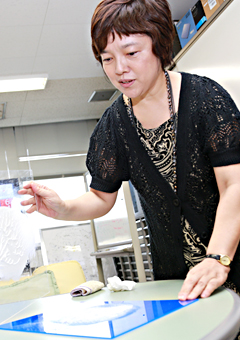 She squeezes out some tooth paste onto a plastic sheet and covers it with another piece of plastic. Slowly peeling it back, she reveals an exquisite dendritic pattern. "I discovered the same type of pattern when cleaning the bathtub with my child, after shaking some cleansing powder onto a sponge, and I came up with a simple experiment to reproduce it," says Associate Professor Misako Takayasu with a smile. This incident speaks volumes about the way she engages in life's daily activities, with eyes wide open and in happy pursuit of answers.

Fractal geometry is a concept first introduced by French mathematician Benoît Mandelbrot. The word "fractal" describes self-similarity, a complex patterning where any part extracted exhibits a pattern similar to the whole. For example, the line depicted by a ria coastline when viewed on a map forms an intricate shape, and enlarging any part of it reveals the same complex pattern. The extent of that complexity can be quantified and expressed volumetrically as fractal dimension. 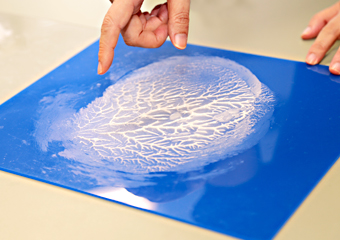 Takayasu first encountered fractals in 1983 as a new student at Nagoya University. Mandelbrot's concept and chaos theory were just starting to attract attention within the scientific study of complex systems and fractal theory had not yet been seriously studied in Japan. Takayasu had wanted to go beyond what she was learning in class to try her hand at more cutting-edge research and fractals fit the bill perfectly.

"During the summer of my first year at Nagoya University, I took a seminar led by Fields Medal[1]-winning mathematician Heisuke Hironaka called On the Wings of Mathematics, and some of us decided to translate Dr. Mandelbrot's The Fractal Geometry of Nature. Scholars at the time read the book only in its original language, so we went ahead and translated it into Japanese. I remember being so excited that even students could be a part of such advanced research," Takayasu recalls. The independent study seminar later started by Nagoya University students, called the Fractal Study Group, ultimately led Takayasu to begin her fractal studies in earnest.

Takayasu studied statistical physics at the Condensed Matter Physics Laboratory in Nagoya University's Department of Physics, which was conducting research closest to fractals at the time. As a postgraduate at Kobe University, she went on to study aggregating systems with injection[2], which is where fractals and statistical physics intersect. Through her work, she attempted to answer why the distribution of aerosols (fine particles floating in the atmosphere), such as today's oft-discussed PM2.5, follows a power-law distribution that is fractal in nature. 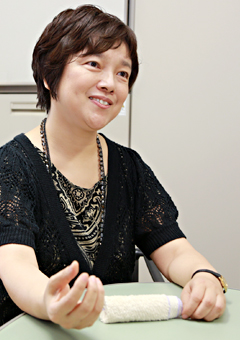 While still a graduate student, Takayasu had the opportunity for a long-term stay in the United States at both Boston University and Yale University as a visiting researcher. The former is the home of influential statistical physicist Harry Eugene Stanley and the latter is where fractal geometry's Dr. Mandelbrot worked. Her dissertation was informed in large part by what she experienced at these universities. The presence of fractals in every aspect of the natural world was a hot topic of study at the time and Takayasu realized that it was of key importance to study systems that automatically maintained a fractal state. Thus, she made that the focus of her research.

After obtaining her doctorate, Takayasu continued her studies in automobile traffic congestion phenomena and Internet packet congestion phenomena at Tohoku University and Keio University, as well as at Future University Hakodate. She says that the statistical physics model she developed for automobile traffic congestion phenomena came to her when she was stuck with her family in a massive traffic jam while on a family trip. "What really causes traffic jams?" she wondered. That turned into a family discussion of how cars will stop right away when you step on the brakes, but take more time to accelerate when you step on the gas pedal. The asymmetric nature of this relationship led Takayasu to guess that this could be the essential cause of traffic congestion. She says the model was fully formed in her head by the time she got home from the trip.

Not long after this, Takayasu had the chance to talk with an information science expert, and she learned that Internet packets are very similar in nature to cars on a highway. She decided that Internet traffic congestion would be a good topic for study. Model analysis and measurements made it clear that the highest flow rate occurred during the critical borderline state between non-congestion, or low-density packet traffic, and congestion, or high-density traffic, and that this was also the point at which the flow rate began to fluctuate in fractal patterns. "Common sense tells us that fluctuation interferes with the mastery or control of a situation, but efficiency is increased when fluctuation is being managed in fractals, which should help us come to a logical understanding of why fractals exist across the board in the natural world, in living organisms, and even in human society."

Not long after this, Takayasu had the chance to talk with an information science expert, and she learned that Internet packets are very similar in nature to cars on a highway. She decided that Internet traffic congestion would be a good topic for study. Model analysis and measurements made it clear that the highest flow rate occurred during the critical borderline state between non-congestion, or low-density packet traffic, and congestion, or high-density traffic, and that this was also the point at which the flow rate began to fluctuate in fractal patterns. "Common sense tells us that fluctuation interferes with the mastery or control of a situation, but efficiency is increased when fluctuation is being managed in fractals, which should help us come to a logical understanding of why fractals exist across the board in the natural world, in living organisms, and even in human society."

Big Data Analysis Contributes to the Betterment of Society

The 21st century brought an explosion of subjects for fractal research with the appearance of big data, or hugely massive and complex data sets. The sheer size of the samples that can be taken from economic or social data that is generated in financial markets, business transactions, POS systems, or in social media like Twitter and blogs, helps make it easier to recognize structures and correlations. Research at the Takayasu Lab today concentrates on taking a fractal view of various types of big data-related phenomena and using statistical physics to develop models.

For example, computer analysis performed on massive data sets from business transaction networks of roughly one million Japanese companies reveals the scale-free characteristic. This term describes a fractal characteristic in that the number of companies engaging in transactions follows a power law[3]. Basing the inquiry on the fact that atmospheric aerosol distribution follows power law, and applying theoretical analysis of aggregating systems with injection, Takayasu proposed a mathematical model of a network of business transactions that takes into consideration new companies, mergers, acquisitions, and bankruptcies. In doing so, she proved that a characteristic of the network would be its automatic convergence into a scale-free steady state. Takayasu continues to research fractal characteristics and deviations from fractal models in price fluctuations in financial markets. Methodology developed in her lab for quantifying market stability is already in use in financial markets. Other research includes analysis of blogs and counting the number of times certain keywords, like "Christmas" or "tsunami," appear in the character strings entered every day by millions of people. Though it is difficult to predict the behavior of individual humans, Takayasu found that on a social scale, the heightening of interest in or convergence of reaction to a particular event or accident is represented as a power law function. Takayasu thinks that by applying this finding, we may be able to estimate "how many people will be interested in a tsunami ten years from now."

"Going forward, fractal analysis and statistical physics will help us explain not just social phenomena, but ecosystems and other phenomena if we continue to collect observational data from a variety of fields," says Takayasu. She is currently pursuing joint research on a practical level that is beyond the ordinary scope of scholarly activity. Such research includes, for example, doing economic data and blog analysis in collaboration with corporations. The goal for Takayasu and her students in the near future is to contribute to a more vibrant business economy and a more stable and secure society through the practical application of technologies they have developed.

"The seeds of scientific study can be hidden in ordinary life and casual conversation. The important thing is to think hard about whatever it is that you find interesting and never be afraid to ask questions." 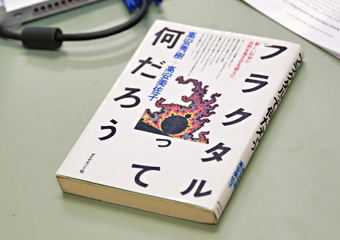 Takayasu has this to say to future scientists. "Any time you approach a new challenge, you will face difficulties. Many of my papers that I thought were major breakthroughs did not even make it to peer review. I know that Dr. Mandelbrot himself fought a lot of battles before his concept of fractals gained acceptance. What seems outrageous today may become common sense in the future. I hope that you keep dreaming of that day and keep chasing after what you believe."

"The seeds of scientific study can be hidden in ordinary life and casual conversation. The important thing is to think hard about whatever it is that you find interesting and never be afraid to ask questions."

A prize awarded once every four years to mathematicians not over forty years of age with outstanding achievements. The Fields Medal is viewed as the most prestigious award in the field of mathematics.

A system whereby multitudes of particles float in the atmosphere and aggregate upon collision with each other. In general, all particles will aggregate after the passage of sufficient time. However, when new fine particles are injected into the system (dust, factory fumes, etc.), particle size distribution is known to follow power-law distribution.

Power law is a probability distribution of random variables whereby one varies as a power of another. It is frequently observed as the distribution of things, physical and otherwise, that differ in size by several orders of magnitude occurring in natural and social phenomena such as the size of craters on the moon, the size of a catchment area for a river and the distribution of income. Most of these phenomena involve things that are small in size but also include a few that are significantly larger and account for most of the total effect. Research into power-law distribution developed through research into fractals.