On October 26, 2020, Prime Minister Yoshihide Suga declared in a policy speech that Japan would reduce its overall emissions of CO2 and other greenhouse gases to zero by 2050. He stated that "dealing with global warming is no longer a constraint on economic growth. Taking aggressive measures to fight global warming will bring about changes in industry and the economy, leading to significant growth."

Working towards this very goal is Manabu Ihara, professor at the School of Materials and Chemical Technology and an expert in environment and energy research. Representing more than 70 environment and energy researchers at Tokyo Tech, Ihara launched the InfoSyEnergy Consortium in November 2019 to promote research and education spanning big data science and energy. The goal is to create a sustainable energy society that brings together global warming countermeasures and economic revitalization, what Ihara envisions as an "Ambient Energy Society."

Ihara is excited about Prime Minister Suga's declaration to reduce greenhouse gas emissions to virtually zero. "It's a welcome goal. The transition to a sustainable energy system will be further accelerated. Universities have a large role to play, and it's also a great business opportunity for companies. We will take on this challenge in the framework of industry-academia collaboration." 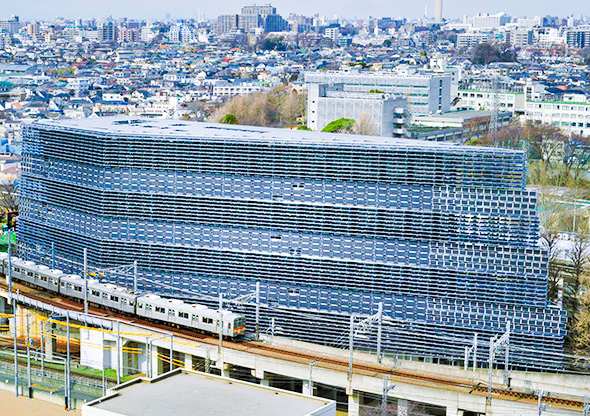 Tokyo Tech’s Ookayama Campus has a unique building visible from the Tokyu Oimachi Line and covered with 4,570 solar panels. Named the Environmental Energy Innovation Building (EEI), it was completed in 2012 and serves as a research building. Using renewable energy technologies such as its large-scale solar cell installation, as well as the integration of fuel cells, gas engines, Li-ion batteries, and other storage systems, the EEI is mostly energy self-sufficient. It also employs a smart energy system called "Ene-Swallow" that collects and analyzes all data related to the building’s power generation and consumption. This has enabled more efficient energy use, reducing CO2 emissions by more than 60% compared to other research buildings of the same size. It was Ihara who worked on the development of this system.

In addition, the adoption of renewable energy is essential for reducing CO2 emissions. Achieving that, however, requires the technology to store and transport the energy that has been generated. Therefore, Ihara is focusing on the development of technology for the utilization of hydrogen energy as his second research topic.

"Hydrogen is the optimal substance for storing a large amount of energy over a long period of time. Moreover, converting electrical energy into hydrogen makes it possible to transport energy from the production site to the point of consumption. Water electrolysis cells can be used to produce hydrogen from electrical energy, and fuel cells allow for highly efficient conversion of hydrogen to electrical energy. But for society to adopt these technologies, costs need to be reduced through further improvements in efficiency. At my laboratory, we are developing solid oxides, electrodes, electrolytes, and unique operation methods that function at higher temperatures and have faster ion conductivities and reaction rates. In doing so, we are aiming for a comprehensive reduction in manufacturing and power generation costs."

For his third research topic of a new smart energy system, Ihara is developing a "grid cooperative/distributed real time smart energy system" as the next evolution of Ene-Swallow. He is aiming for completion in five years, in cooperation with faculty members and companies of the InfoSyEnergy Consortium, described later.

With Ene-Swallow, the EEI currently acquires about 8,000 data points in one second to one minute. The next-generation Ene-Swallow will be implemented not only for the EEI, but also the entire Ookayama Campus, allowing fuel cells, electric vehicles, and other various energy devices to connect to it and acquire data. The idea is to analyze that big data with AI to achieve highly precise device control and accurate forecasting of electricity demand. Ihara states that in order to expand adoption of renewable energy, it is essential to provide the electricity market with reliable power that can adjust to fluctuations associated with renewable energy production. He further plans to construct an "Energy data informatic platform" for common use.

Renewables for the next generation of energy systems - A challenge undertaken by 1,000 researchers across academia, industry, and the world

"Energy systems are directly linked to industry and civil life. In designing a next-generation energy system, we should specify what kind of society we should aim for, what steps we should take to achieve it, and what challenges we must overcome in the future. Then, we must share this widely with the rest of society. Furthermore, realizing an Ambient Energy Society, one in which fighting global warming and growing the economy are both possible, is not something achievable by a single university, company, or country. It is important to build strong global partnerships between academic, research, and industrial institutions."

Therefore, in November 2019, the InfoSyEnergy Consortium was launched at Tokyo Tech, with Ihara playing a central role. Currently participating in the consortium are more than 70 Tokyo Tech Professors/Associate Professors from various energy-related fields, as well as 16 universities and more than 25 companies and other institutions from around the world. Including students, the consortium’s approximately 1,000 members are working on nine research topics. 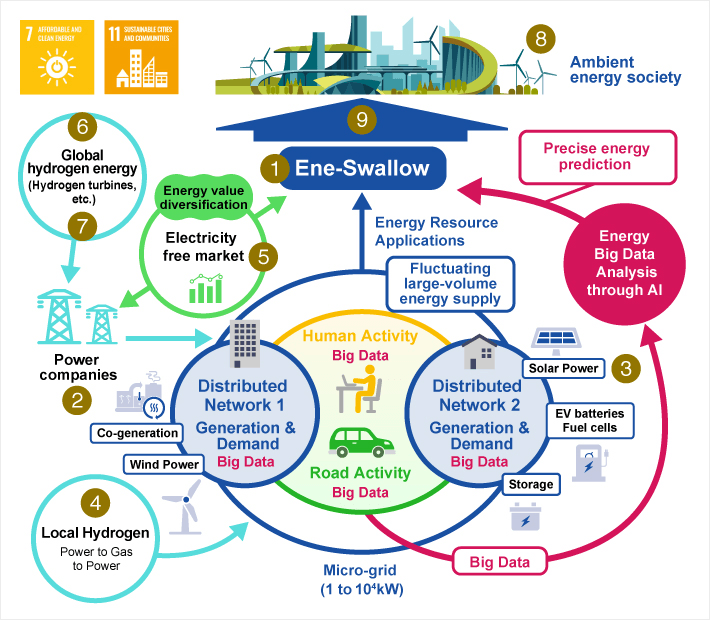 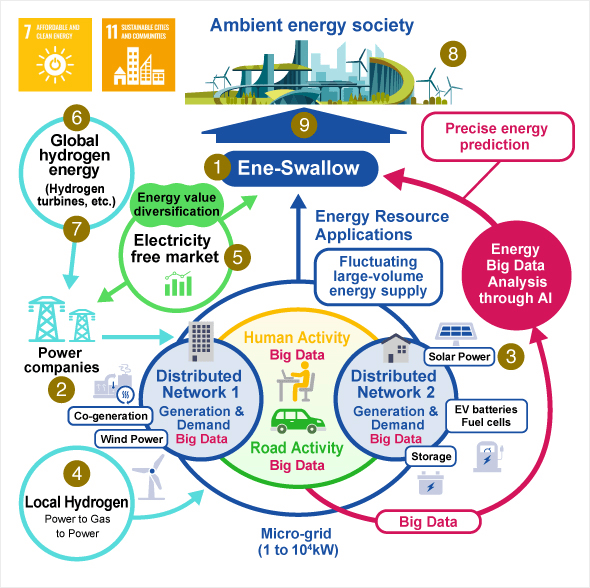 "Energy systems have been designed to send electricity generated at a centralized power plant to local regions through power transmission lines. But moving forward, the number of distributed systems with local production and local consumption will increase in local regions, where electricity is generated and consumed using renewable energy. Networking distributed energy with information and communication technology (ICT) makes it function like a single power plant. Furthermore, utilizing the free energy market achieved through networked regions, energy lending can occur, providing stability for the system. In this future system, in addition to data on where and how much electricity is produced and used, data on the movement of people and automobiles is also collected and analyzed using AI. This will optimize supply and demand, on the premise of buying and selling in the energy market, benefiting both the economy and the environment. Towards social implementation, Ookayama Campus will be a proof-of-concept region for us to conduct research and development."

"These days, in other countries where large amounts of renewable energy are generated, limits are placed on base load power sources (*). Controlling power in the same way in Japan can achieve the economic rationality of electric power as a whole and the reduction of CO2 emissions."

*A power source that can supply a certain amount of stable electricity at a low cost regardless of season, weather, day or night.

"We are working on technologies for improving the conversion efficiency of solar cells, and the development of hydrogen production technology using photocatalysts."

"We are developing technology for production of hydrogen via water electrolysis, utilization of produced hydrogen in fuel cells, and storage batteries for storing surplus power. The next-generation energy system is expected to adopt "global hydrogen" and "local hydrogen." Global hydrogen is hydrogen produced in large amounts using cheap electricity in areas with long daylight hours, such as the Middle East and Australia, and transported. Using that hydrogen as fuel, a turbine at a power plant is turned to produce large amounts of CO2-free electricity. Local hydrogen is hydrogen produced from renewable energy within a small electric energy network in Japan, and used in fuel cells, etc."

"Electricity is currently bought and sold only in units of kilowatt hour (kWh) for the value of the electric energy. But diversification is expected in the near future, such as in the value of electricity during times when less power is generated, the value of adaptability to sudden changes in power, and the value of low-carbon electricity. Therefore, we are designing a next-generation electricity free market."

"Global hydrogen involves transporting a large amount of hydrogen from overseas. Therefore, converting liquid hydrogen or hydrogen into ammonia (NH3) or methylcyclohexane (MCH), etc. so that it can be easily transported is under consideration. We are conducting research here on catalysts that are essential for this purpose."

"The heat generated by burning coal and natural gas currently produces steam, which turns a turbine to generate electricity. However, with the goal of reducing CO2 emissions, a shift to mixed firing, which mixes hydrogen with natural gas, and to single fuel firing, which uses only hydrogen, is expected. Therefore, we are developing technology and designing systems for the stable combustion of hydrogen, and for the effective use of heat."

"In addition to energy science and engineering and information science, researchers from a wide range of fields such as sociology and economics will gather to discuss what the energy society should be like and propose/disseminate scenarios for bringing it about."

Ihara advocates an Ambient Energy Society as the future society that the consortium should aim for. This is defined as a human-centered energy society freed from constraints on energy use such as energy costs and CO2 emissions by wisely using mainly renewable energy with IoT, ICT, and AI analysis of big data, and creating diverse services. In other words, a society in which energy can be used naturally (ambient) without feeling overconscious about energy consumption.

"In creating a next-generation energy society, CO2 emission reductions and economic growth must be able to coexist. Through system optimizations with various scales (Multi-scale energy optimization Technology) via AI-driven big data analysis, and wide use high-accuracy prediction for energy management (Knowledge structured/AI hybrid energy prediction), the electricity market can be provided with stable and flexible power, promoting a bottom-up shift to an autonomous, decentralized, and collaborative energy society. Furthermore, if innovative services are created based on the collected data, new value could be expected from business opportunities for converting energy systems. For example, if you can calculate the route with the lowest energy cost when delivering express home delivery packages, that data becomes a business. In other words, it is no exaggeration to say that data for optimizing energy use holds promise in terms of energy conservation, but is also a major business opportunity. It will take some time before we can realize such a society, but I strongly believe that we can reach that goal. This is the true definition of sustainability, and that is why now is the time for researchers and engineers to give it their all." 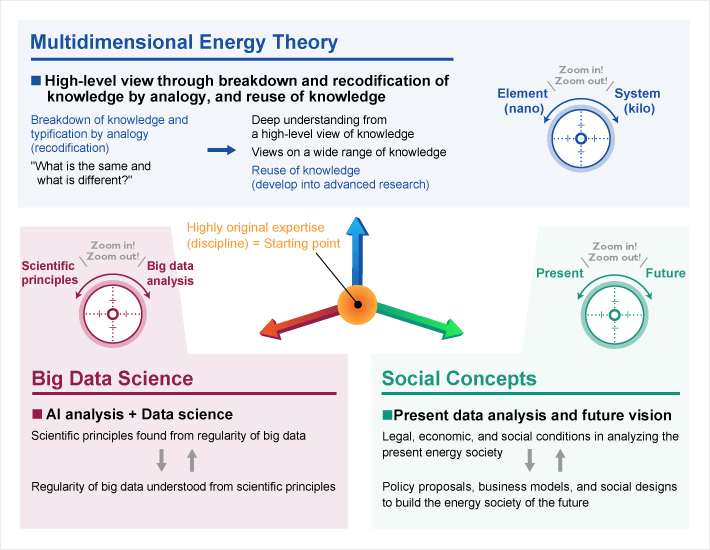 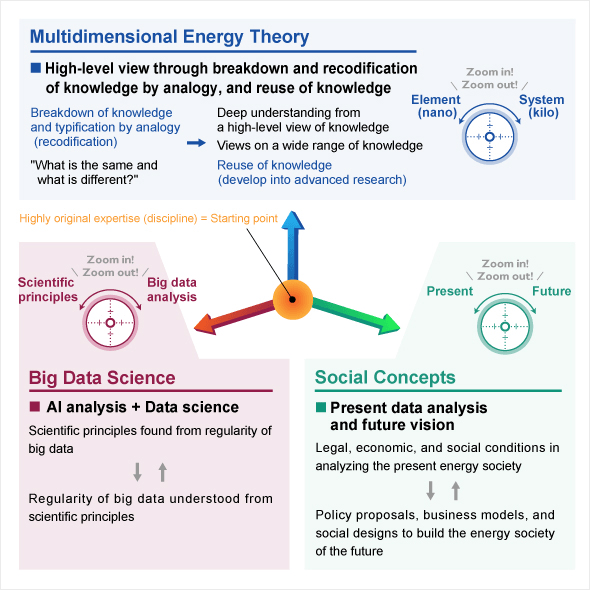 Ihara has a message for the young people who will define the future. "After completing my doctoral degree, I became an assistant professor in the Division of Global Environmental Engineering. This sparked my interest in and brought home the importance of "research on energy conversion," in particular to limit global warming. I decided to make it a lifelong research topic that I would work on. The world was skeptical of global warming at the time, but I believed in my own inquiries and intuition. Therefore, I would like young people who will define the future to be courageous enough to aim for research that will open up new research fields. Progress in research that creates new fields requires logical inquiry and passion based on scientific principles. I hope that young aspiring researchers, in particular, will find a research topic they think is really fun and necessary, as well as learn the scientific principles."