What does "diversity" really mean? A talk with Associate Professor Asa Ito 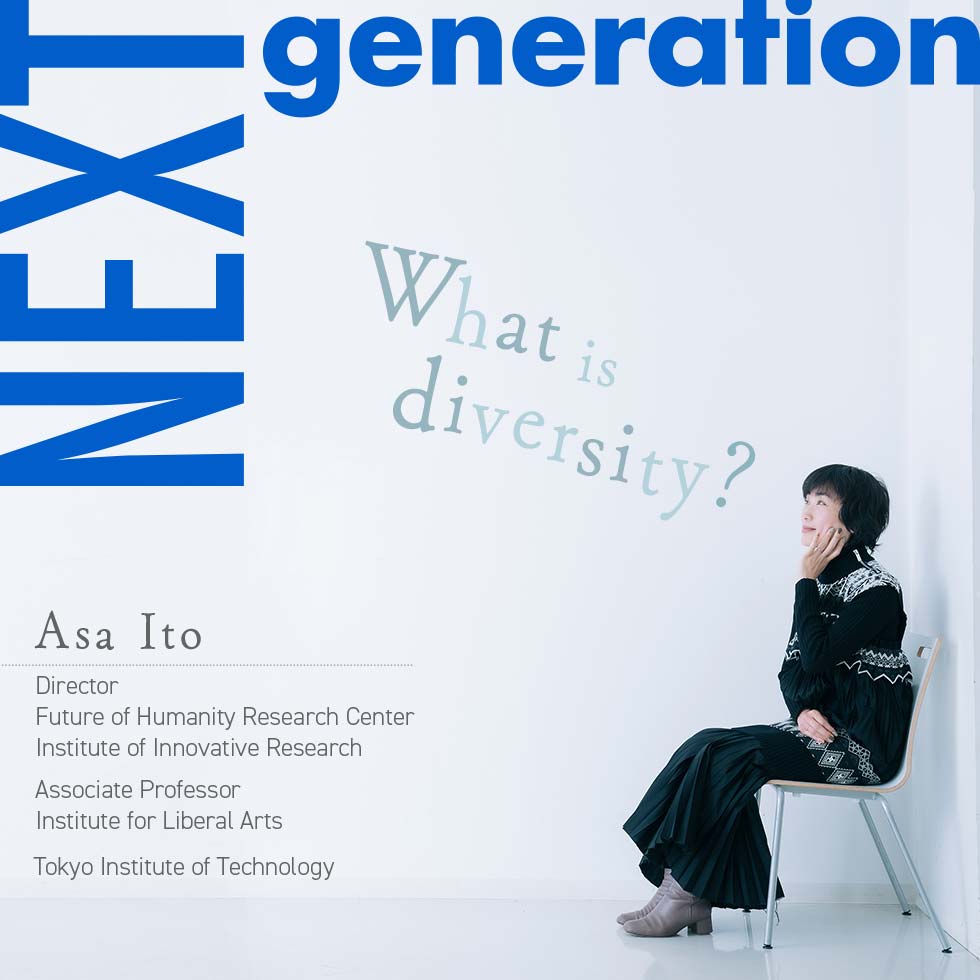 Asa Ito is the director of the Future of Humanity Research Center, a center in the Institute of Innovative Research focusing on how perceptions of the human body are influenced by disabilities. Looking at her past experiences and current research, we talked with her about what "diversity" really means.

It all started with my love for insects 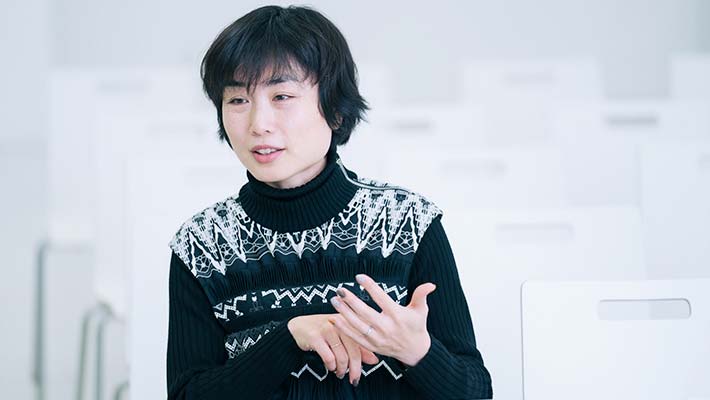 "These creatures, so much tinier than humans, without warm blood and without brains. They must live in a world completely different from mine. I want to see the world that they see." Until my second year in university, I carried those childhood thoughts with me as I entered into science wanting to become a biologist.

What first gave me the idea to become a biologist was a book I read in junior high school, The Time of an Elephant, The Time of a Mouse — Biology of Sizes (translated), by Tokyo Tech Professor Emeritus Tatsuo Motokawa. The book explains how sense of time differs between species, affirming my idea that different creatures do live in different worlds.

However, when I entered university, I became disillusioned with how science was so finely segmented into specific disciplines. What I wanted to understand were more comprehensive, macroscopic concepts such as "How do different organisms perceive the world they live in?"

We too are living in different worlds

In my third year, I switched from science to liberal arts. I chose aesthetics, which focuses on vague and verbally indescribable areas, such as feelings evoked by artworks. Through aesthetics, my interest shifted from inter-species differences to those of the human body. Even though we are all of the same human species, our physicalities completely differ. That made me realize that we too are living in different worlds.

I am bound by my sight. I began wanting to free myself from that restriction, so I decided to talk with visually-impaired people. From those I spoke with, I learned how they can estimate the size of a room or how crowded it is by the echoes of voices. That showed me that there are other ways of seeing the world aside from vision. I also spoke with people with stutters, dementia, people who had lost part of their body function due to cancer or accidents, and others. I learned about the different ways of perceiving and using the body to perceive the world.

In my latest research project, carried out jointly with NTT Laboratories, we aim to make sports experiences available to visually-impaired spectators.

Usually, visually-impaired spectators enjoy sports by listening to live broadcasts. But those I spoke with shared negative experiences, saying that they could not feel "the thrill of live events" or "the sense of unity with other spectators." So looking for a way to cover what live broadcasts can’t, I came upon sense of touch and vibration.

Our first attempt was to use a towel to translate judo. Why a towel? Because we thought a sheet of cloth could do something similar to how a tether held by a blind runner and sighted guide can allow them to synchronize their movements. 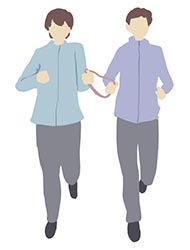 It may look like a mere rope, but it can transfer tremendous information during running. For example, if a hill appears ahead, the guide will see it and react, thinking "Oh, there’s a hill!" That reaction gets transferred through the rope to the blind runner, who will also then react, thinking "Oh, there’s a hill!" Fleeting emotions that arise just before verbalization are conveyed directly. This involuntary communication, differing from what we do in everyday life, happens via a rope.

We decided to use this theory to express the sensations of judo. In the process, a blind spectator holds the center of a towel, which is held at both sides by two judo athletes. As the athletes move, the struggle and tactics of their movements get conveyed to the spectator. 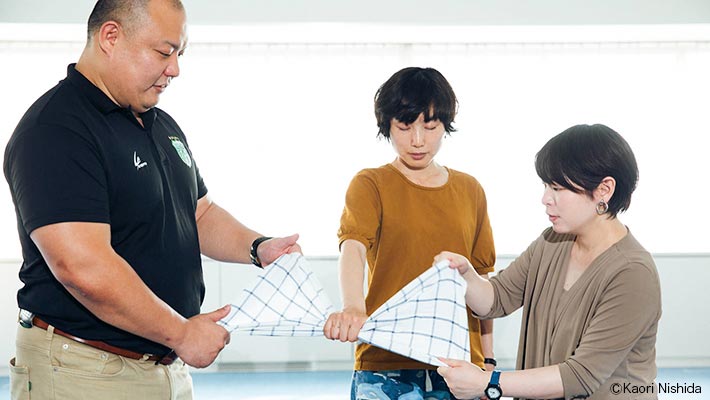 We then realized how non-disabled spectators also enjoy games in a limited way: only by watching! Is this really the right way to appreciate sports? Even athletes don’t always depend on their vision. For example, think of soccer players. The better they become, the less they see the ball when dribbling.

In other words, there is a significant gap between merely watching sports and experiencing them. To fill the gap, we have built a site called Mienai Sports Guide

Based on feedback from top athletes of each sport on the sensations they have during their games, it shows how to translate those sensations using daily objects.

For example, the site presents fencing and baseball as follows.

In fencing, the player holds a foil lightly between the index finger and thumb. And as the foil is very flexible, wrist movements play an important role. In this activity, the sensations of engaging blades and releasing to strike are conveyed using entangled wooden blocks shaped as a "C" and "H". With both players' eyes closed, one player tries to disentangle their block, while the other player tries to prevent it.

We tend to think that the real charm of sports is only available to top athletes or those who have mastered the skills after significant effort. But how wonderful it would be if even non-skilled spectators could experience the essence and sensation of individual sports — even partially. The result is new landscapes of sports enjoyment, which continue evolving. All that is the intention behind the Mienai Sports project and our ongoing efforts to translate the intrinsic quality of various sports based on top players’ feedback.

Overuse of the term "diversity"

My research and other experiences in my life have caused me to question, "What is true diversity?" Personally, I’m worried about how the term "diversity" is getting overused.

I spent six months living in the US, and I seldom heard the word "diversity." This is because diversity is the norm there, and the issue lies in how to build a society based on that premise.

But in Japan, I’m afraid the superficial promotion of words like "diversity" and "inclusion" result from a misunderstanding of the concepts. With people saying "everyone can be different," the words become an acceptance that everyone can be indifferent to one another. This links with insensitive use of labels, such as when referring to people by nationality or to those with visual impairments as “the blind.”

This is not how it should be. We must see the diversity in each individual. For example, someone who is blind may be a parent at home and a professor at the workplace. Blindness is just one of the facets constituting that person. By redefining each individual with diverse aspects, you will find more possible ways to interact with them, their otherwise invisible personas will manifest, and your respect for them will grow. 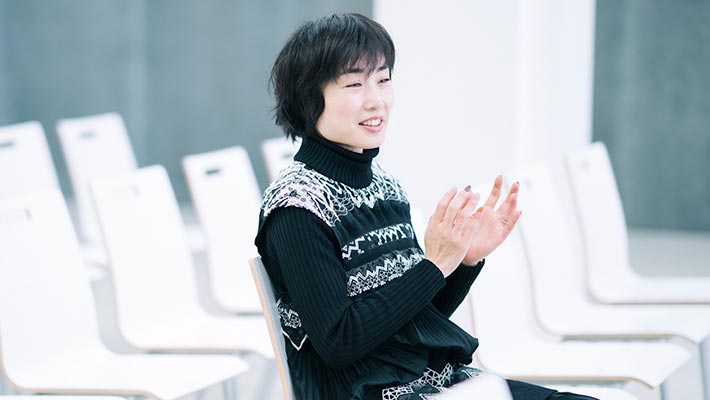 "Diversity" is seeing the diversity within an individual

Then, how can we change our way of seeing people? Let’s think; what does the phrase "disabled people" remind you of? Ideas such as "consideration," "support," and "assistance"? Of course, those things may sometimes be necessary. But if that’s all you imagine and nothing else, then it may lead to self-righteousness. So the first step is to tear down such one-sided relationships.

As an example, the fencing game described in the blog I previously mentioned would allow you to really play with a visually impaired person. Since the game involves something beyond sight, their abilities may be far better than yours. That allows you to remove the "handicapped" label and see them as an individual.

Accepting diversity is the tolerance of chaotic disorders. Talking about the Japanese, we are generally less resistant to chaos and tend to control human relationships with the prevailing sentiment in the air. Depending on the situation, there are always implicit rules shared by the majority of those present. Dubbed "reading the air," this rule implicitly forces you to behave in a predetermined manner: one should act this way or should say thank you in specific situations. Chaos is not allowed. Things should be orderly; everything is ritualistic. All this creates a society hard to live in, for both non-Japanese — who speak different languages and are from different cultures — or those with developmental disorders. I believe it is time we stopped reading the air and performing rituals in human relationships. That doesn’t mean stop considering others, but caring for them without being ritualistic.

Disabilities are just an example. Differences related to various factors such as race, gender, and religions can be invisible walls among people. We should not allow that, and strive to build a society where diversity — or diverse aspects of each individual — will be celebrated without any forced consciousness. I want to pursue this goal through my current and future projects.

Research at the Future of Humanity Research Center begins!

In February 2020, the Future of Humanity Research Center starts its operation. We interviewed Associate Professor Asa Ito, the appointed director of the center, about its purpose and goals.

“Science and technology have significantly changed our lives. But the development of robots and artificial intelligence starts rewriting the definition of human beings. To cope with such a situation and bring out better the potential for science/technology, we need to prepare practical and essential questions with a focus on people in decades or centuries ahead. Addressing those issues toward the future is the purpose of establishing the Future of Humanity Research Center. As a center for humanities and social science research located within a science and engineering university, it features diverse researchers from the Institute for Liberal Arts.”

"The first five years will concentrate on "Rita-ism" (altruism), which is an indispensable guidepost to navigate through today’s ruthless society, where exclusivism is rampant, and fragmentation is accelerating. Here is how we refer to Rita-ism. It comprises actions and attitudes benefitting others, not ourselves. This seemingly irrational stance can lead us to hints for redefining people, society, and science/technology from fresh perspectives. Such perspectives are free from meritocracy, utilitarianism, or numerical evaluation. They originate from the human quality aspect illuminated by the light of Rita."

"Research fields at the center will include politics, economy, religion, artificial intelligence, environment, space, and others. Through collaborative projects and exchanges with other researchers and experts in various fields, we plan to develop our Rita practice in approaches unique to Tokyo Tech."

"Please look for our upcoming Rita Project at the Future of Humanity Research Center!"

Institute for Liberal Arts
—Connecting Science and Technology with Society—

Information on Institute for Liberal Arts inaugurated in April 2016