Industry and academia - The different paths of two researchers

Both seeking to create the next generation of batteries 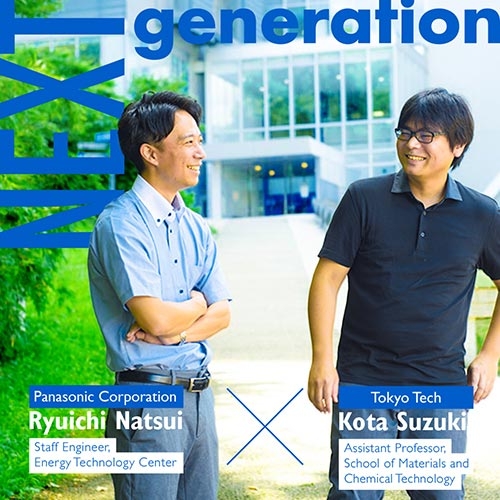 The 2019 Nobel Prize in Chemistry was awarded to three scientists for developing the fundamental technologies of lithium-ion batteries. Powering everything from smartphones and laptops to electric cars, they are an indispensable component of modern society. Ryuichi Natsui and Assistant Professor Kota Suzuki are two Tokyo Tech graduates from Ryoji Kanno's

* world-leading laboratory on battery research. Both are working to bring forth the next-generation of batteries, but through different career paths. After graduation, Natsui chose to work in industry and joined Panasonic, while Suzuki chose to continue in academia at Tokyo Tech. What were their thoughts at that time? What informed their choices? What kind of future do they hope to create?

* In 2008, Ryoji Kanno & Atsuo Yamada (currently Professor at the University of Tokyo) Laboratory

I understand that you both enrolled in the same laboratory in 2008. Have you kept in touch since then?

Ryuichi Natsui (Panasonic Corporation):With our schedules, not so often. But we have crossed paths at special occasions, like our labmates' weddings.

Kota Suzuki (Tokyo Tech):We've also run into each other at research facilities and conferences.

What was your research when you were at Kanno Lab? 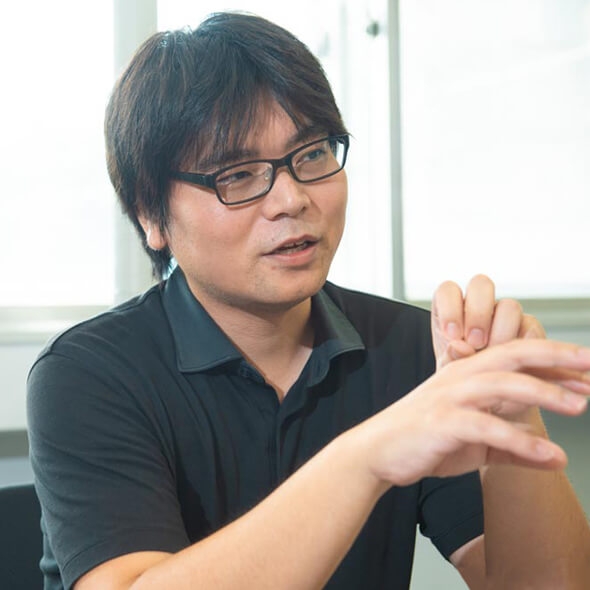 Suzuki:I studied lithium batteries. This year's Nobel Prize in Chemistry went to Drs. Goodenough, Whittingham, and Yoshino, scientists who built the foundation for lithium-ion batteries. It is such a wonderful achievement, and I am honored to be working in the same field as these pioneers.
As a student, I focused on the interface of lithium batteries (the boundary between electrode and electrolyte). A lithium battery is made up of two electrodes, an anode and cathode, placed in an electrolytic solution. Ions traveling between the anode and cathode allow for charging and discharging of electricity, and the interface acts as the entrance for the ions. Understanding the chemical reactions that occur at the interface is very important to increasing battery life. However, the phenomena at the interface had not yet been clarified, so I made models of thin films to study them.

Natsui:I was working on a lithium battery material called cathode powder. Batteries deteriorate after repeated charging, and there is growing demand for batteries that can be charged more rapidly. Addressing these issues requires that we understand the underlying mechanisms. So my research was to try to understand them.

During those days, what were your impressions of each other?

Suzuki:I felt that Natsui-kun* was good at working efficiently in a limited amount of time and always went about his research logically.

Natsui:Suzuki-kun was thinner than he is now [laughs], and was cool-looking. He has an energetic side, but his research style is slow and steady, very methodical.

* "Kun" is a Japanese suffix often used between friends. 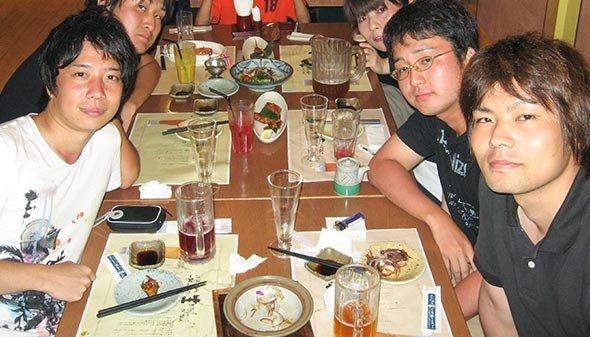 During their student days at a lab party

At graduation, taking their first steps on separate paths 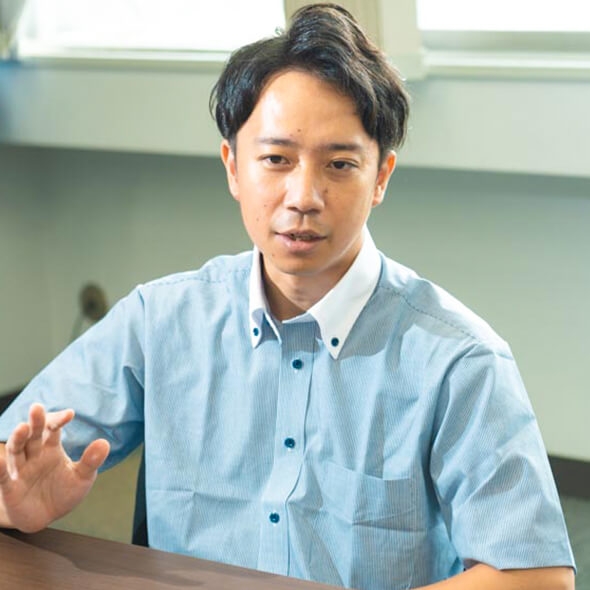 Natsui:I wanted to be involved in "monotsukuri", actually making things, so I felt that working in industry was the way to go. The battery market is expected to continue to expand, and I wanted to work in an environment with a competitive future.

Suzuki:I also thought about the private sector. But in the end, I realized that it's a really great thing being able to spend your days immersed in research, preparing for an experiment off-site or authoring a paper. It's hard to put into words, but I enjoy that atmosphere you get the night before a festival [laughs].
I'd also heard that no other university has the environment and facilities that Tokyo Tech has. So I chose this path to continue to be involved in cutting-edge research.

Natsui:Once, when I was attending a conference, I saw that Suzuki-kun was serving as the moderator. I was so impressed, because the only people who sit there are those who have been acknowledged by the field.

Suzuki:Conversely, I think Natsui-kun is in a great position because he gets to be involved in the development of new products right up until launch.

Natsui:Actually, it's a thorny path before a new product can finally go out the door!

What research are you involved in now?

Suzuki:I am working on all-solid-state lithium batteries. Probably when most people think of lithium batteries, they are thinking of the type that contains liquid. However, lithium batteries made entirely of solid materials are gaining attention as the next generation of batteries. The most important part of the all-solid-state lithium battery is the solid electrolyte, and I am trying hard to find a better one. Although we have good materials now, they cannot be used in all places around the world. The current materials we have must be stored in special containers to protect them from exposure to air, which significantly increases cost. If we can identify materials that are stable in air while maintaining the same performance, we can reduce manufacturing costs, which would lead to wider use. It would be a breakthrough.

Natsui:I am involved in research and development of liquid-type lithium batteries. That is material development of high-capacity batteries. Low cost, high capacity, and rapid charging are always wanted, and light-weight batteries are in growing demand for use in drones. I am working to develop materials that meet these market needs.

Suzuki:In this sense, I think what we're doing now is nearly equal to what we did as students, isn't it? 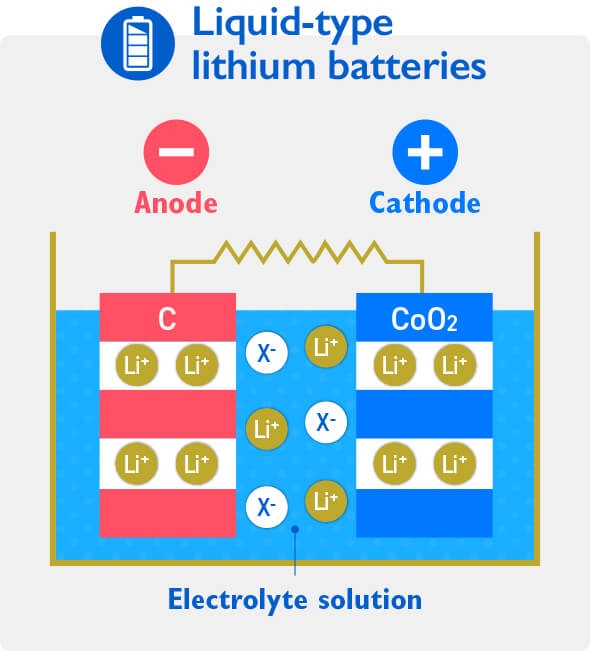 Though you follow different paths, do you think you will ever have the chance to collaborate?

Suzuki:I don't know when, but it's certainly possible.

Natsui:Professor Ryoji Kanno's lab at Tokyo Tech, where Suzuki-kun works, is world-class. I think many companies are interested in doing joint projects with them. My team handles liquid-type batteries, while Suzuki-kun's research is in solid-state batteries. So our paths don't really cross right now. But with the progression of battery technology, I think companies will be looking at what Suzuki-kun is doing. When that time comes, perhaps we will be able to work together.

What kind of future do you see for yourselves 10 years from now?

Natsui:Recently, I find myself becoming more management-oriented. Working in research, I've felt that there is a limit to what I can do alone. Panasonic has people who specialize in a wide range of fields, not just batteries. So I would like to be able to coordinate projects across specializations in order to find solutions.
I look forward to that feeling of rapid evolution when all your team members are focused on the same goal. Of course, it's an organization, so there are limitations and constant pressure to produce results. However, I enjoy being able to progress in my work as our strategies also develop. 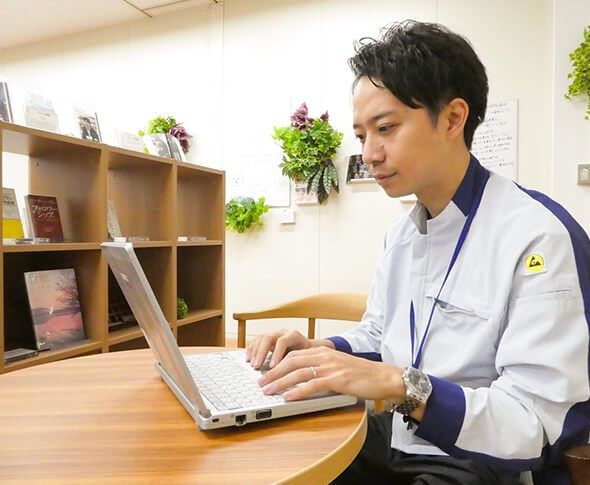 Natsui at work at Panasonic

Suzuki:For the materials I mentioned before, I don't want to just find them. I want to find ways to find them. Though it wasn't possible before, we now have search methods that combine computational and information sciences. As artificial intelligence continues to develop, technology will help us to identify materials based on data that we supply. Of course, this is easier said than done, but I would like to explore new ways of discovering materials by combining both current and new approaches.
Also, research on the next generation of batteries after all-solid-state has already begun, and over the next 10 years, I would like to help make these new batteries the industry standard.

Suzuki in discussion with a student

Nowadays, you are both active in your respective paths of industry and academia. How do you think the roles of companies and universities will change in the future?

Natsui:I still want universities to be the place for finding the "seeds" of science. Universities find a seed and focus on growing it into that first flower. Then those of us in industry help that flower to reach full bloom. That is my image of our future. Open innovation has been promoted for a while now, but the actual number of achievements coming out of the many open innovation projects is relatively low. For greater open innovation, universities need to handle basic research, while companies handle quality and dissemination in society.

Suzuki:I agree. Time and budget constraints narrow universities' flexibility and prevent them from discovering seeds, which then blurs the distinction between companies and universities. If this situation continues, then we will have no one to depend upon when we really need new ideas. Having a clear border between what universities do and don't do will make industry-academic collaboration more fruitful. 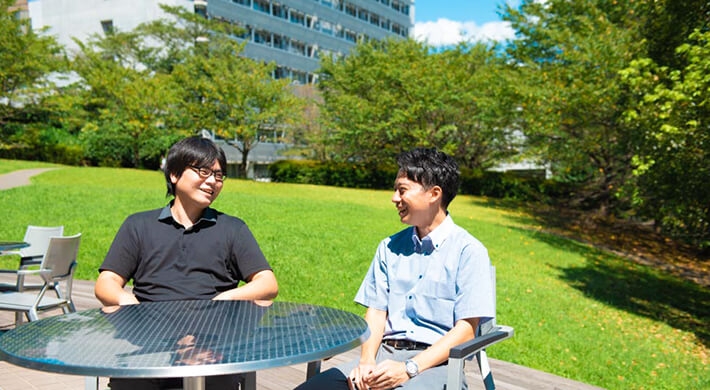 What advice do you have for students who will be entering the workforce?

Natsui:I regret that I didn't have more interactions with researchers from other labs. When results don't go as planned, I find that overcoming that hurdle requires different ways of thinking and ideas from other fields. In that meaning, it is important to interact with various kinds of people. I hope all students will be able to have such experiences.

Suzuki:I would like them to understand the importance of being able to make presentations and speak English. I think the image some people have of researchers is a person working steadily in isolation. But in reality, communicating with people from different countries and different fields inspires new ideas. I, for example, often go to international conferences and speak in front of people in English. It's a good idea to take advantage of opportunities to improve your English and presentation skills while you are still at school. 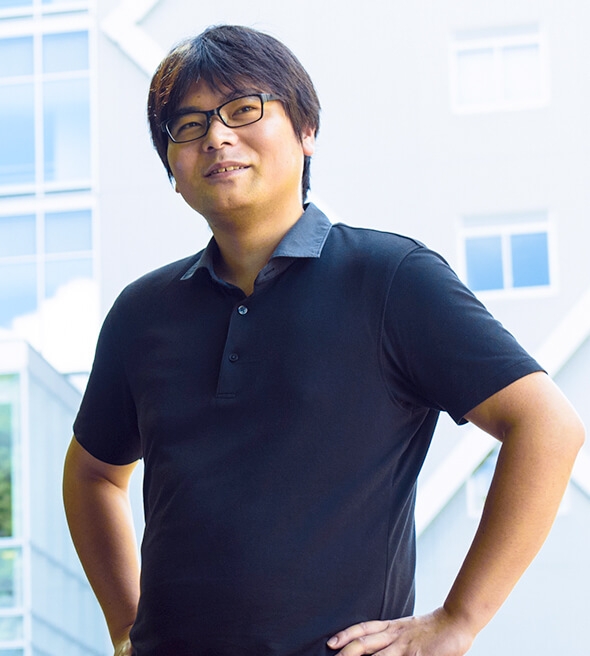 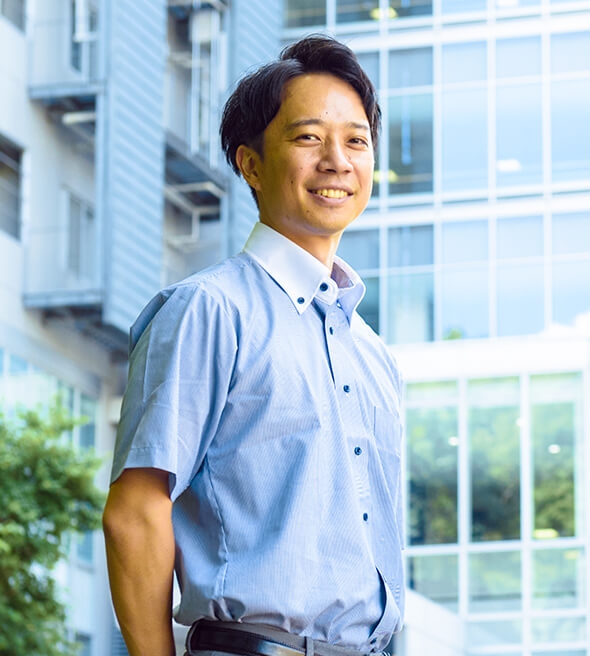