What if another large volcanic eruption occurs in Japan?

"What happens when a volcano erupts in Japan?" asks Professor Kenji Nogami at the Volcanic Fluid Research Center1 in Kusatsu, Gunma Prefecture. The Great Taisho Eruption at Sakurajima, Kagoshima Prefecture in 1914 was the largest volcanic disaster that Japan encountered in the 20th century. The spread of volcanic ash was reported as far away as Chichijima, Ogasawara, 750 miles to the southeast, and Sendai, 750 miles to the northeast. An equally large eruption could happen in Japan at any time.

"Ash from volcanic eruptions overseas has been known to reach the stratosphere, and ash from large eruptions in Japan can rise to more than 10,000 meters. That is enough to cover the whole Japanese archipelago. Such eruptions have a serious impact on transportation. Air traffic is grounded due to severely decreased visibility and the very real risk of accident due to high-temperature ash clogging plane engines, something that actually happened to a 747 over Indonesia in 1982. Ash can also shut down expressways and rapid rail lines such as the shinkansen. When traffic networks are interrupted, supply chains are affected and the delivery of food and other important commodities is delayed. Some experts predict that Mount Fuji will erupt sooner or later, and there are numerous other volcanos in Japan that may erupt and throw communities and regions into turmoil." 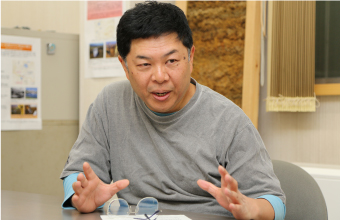 The eruption of Mount Ontake in September 2014 is still fresh in people's memories. The total number of dead or missing reached 63. That disaster was exacerbated by the type of eruption. Nogami explains the impact of phreatic explosions.

"Eruptions caused by phreatic explosions are much more difficult to predict than those caused by magmatic explosions. In a magmatic explosion, high-temperature magma flows into rock crevices, which causes an earthquake swarm, ground transformation, and expansion of the volcanic body. In terms of chemical conditions, the composition and emission of volcanic gas change. In a phreatic explosion, magma is not directly involved. Instead, volcanic gas and the steam generated by it cause the explosion. It is, however, extremely hard to know where and how much steam has accumulated, and preceding phenomena are also weak and infrequent. The Mount Ontake eruption was a phreatic explosion. While the scale was not large, it occurred at the worst possible time, just before noon when climbers were sitting down to eat their lunch on a fine Saturday in fall. That increased its impact greatly."

Although phreatic explosions are difficult to predict, Nogami says a method for doing just that is in sight.

There are three approaches to volcano monitoring. The first is geophysical observation. The most traditional method, it involves the observation of real-time physical changes such as earthquake waves, ground transformation such as expansion of mountains, and changes in magnetism utilizing a global navigation satellite system (GNSS) and clinometers. Most active volcanos are constantly monitored in this way.

The second is geological observation. This involves evaluating volcanic potential by estimating and analyzing the form and scale of past eruptions through petrological, geological, and mineralogical survey of the amount and dispersion of ejecta and the chemical composition of lava. 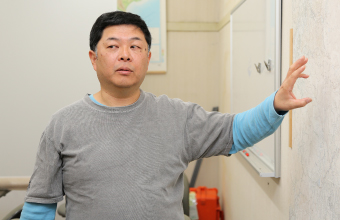 The third is geochemical observation, Nogami's specialty. Volcanic activity is the emission of energy and matter, whose change can be monitored by continuously measuring the chemical composition of various gases, lake water, and other substances. Volcanic gas consists mainly of steam and other components such as sulfur dioxide (SO2), bisulfite (H2S), and carbon dioxide (CO2). Obtaining samples from a mixture of these components requires plenty of experience and special technology, but because volcanic gas travels fast, monitoring and quick assessment of subsurface conditions is possible. For several years prior to the 1976 eruption of Mount Kusatsu-Shirane in Mizugama, former Tokyo Tech professor Joyo Osaka2 and members of his research group monitored changes at the site through geochemical observation. The observations allowed his group to predict a phreatic explosion for the first time in the world. Using this method, abnormalities were also detected three months prior to the eruption of Unzen Fugendake3 in 1990, which allowed warning of the potential eruption to be given.

A syringe with two mouths is used to collect volcanic gas

"While geophysical observation can detect volcanic activity, it is still difficult to understand whether magma is involved or to ascertain the current condition of a volcano. Chemical analysis of the ejecta, however, makes it possible to monitor specific changes in volcanic activity. In other words, we can explain whether the volcano will become more active or settle down."

An active volcano is defined as one having fumarolic activity or that has erupted within the past 10,000 years. There are 110 active volcanos in Japan, 47 of which have been designated for monitoring by the Coordinating Committee for Prediction of Volcanic Eruptions, which Nogami is a member of. These are constantly monitored by the Meteorological Agency of Japan. Among them, the observation and research of 25 active volcanos are prioritized. However, only few national universities, including Tokyo Tech, Kyoto University, and Kyushu University, are involved in the project. To make matters worse, a lack of leading researchers looms in the near future.

The Tokyo Tech Volcanic Fluid Research Center has joined forces with the Volcano Disaster Management Council of Kusatsu Town in Gunma Prefecture, where Mount Kusatsu-Shirane is located, and representatives from other prefectures such as Iwate and Toyama, to promote cooperation and information sharing. Unfortunately, the Volcanic Fluid Research Center suffers from a staffing shortage.

"Volcano disaster management has three major pillars: observation, prediction, and action. The Volcanic Fluid Research Center has a volcano observatory that enables us to conduct research utilizing a wide variety of data. In cooperation with the Meteorological Agency, we base our predictions of volcanic activity on this data and information. One result of this research has been that Gunma Prefecture and Kusatsu Town have built a shelter at Mount Shirane that can accommodate 2,500 people. Because the main objective of predicting volcanic eruptions is to save lives, such projects should be promoted in other areas as well. The problem, though, is the declining number of individuals going into this area of research."

"Volcanos are active everywhere in Japan, even when they are not erupting. We need to work together in training more young researchers to prevent a critical shortage of manpower in volcano prediction research and disaster control."

The importance of monitoring submarine volcanic activity in Japan

Volcanos are not found only on land, but also in the seas around Japan. Tokyo Tech has conducted a wide array of research in cooperation with the Japan Coast Guard for more than half a century in places as far away as the Ogasawara archipelago and Ryukyu Islands. It has been 10 years since Nogami took over oceanic volcano observation from Professor Osaka, who first became Nogami's mentor during his days at Okayama University. 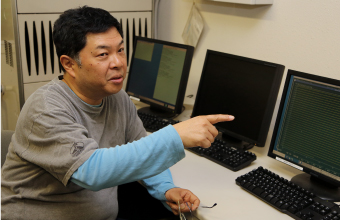 "Chemical analysis is essential in monitoring submarine volcanos. Collecting samples is difficult, however, because it requires a special vessel. For this reason, we can only collect samples on certain occasions. What we usually do instead is look at the characteristics of the area and coloration on the ocean surface from the air."

The ocean surface above the crater of a submarine volcano becomes muddied as a result of volcanic activity. This is caused by the sedimentation of elements via the neutralization of alkali in the seawater and acid contained in the hot water gushing out from the submarine volcano. The result is called discolored seawater. Nogami points out that the unique research Tokyo Tech has carried out opened the way to ascertain the state of a submarine volcano using only photos and surface samples. When a submarine volcano around El Hierro at the west end of the Canary Islands in the Atlantic Ocean erupted in the fall of 2011, Nogami and his co-researchers at the site monitored the conditions and consulted with local government officials.

"The problems resulting from submarine eruptions differ from terrestrial eruptions, but both can have a significant effect on human activity. Japan has 14 volcanic islands that are home to approximately 27,000 residents. If one of these volcanos should erupt, residents can be evacuated. However, it is more difficult to determine if and when they can return to the island. Submarine volcanos also have the potential to affect shipping. If the pumice stones ejected from volcanos get caught up in the engine cooling systems of tankers and cargo vessels, serious problems can result. Volcanic ash can interfere with radar and GNSS. New land masses generated by submarine volcanic activity create issues related to territorial rights and exclusive economic zones, which means that submarine volcano research is directly connected to national interest."

Working in the field will broaden your views 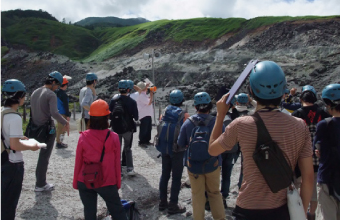 Kusatsu, home of the Volcanic Fluid Research Center, is famous for hot springs. Many may not know that the town is truly an eco-city because it utilizes volcanic activity to its advantage daily. The abundant hot spring water generated by the volcanic activity of Mount Shirane not only supplies the resort baths that tourists visit, but is also used together with a heat exchange system to supply hot water to households. For more than 30 years, hot spring water running in pipes installed under most roads have been used to melt snow.

"There is no other town in Japan which takes such advantage of the benefits of volcanos."

Nogami spends most of his time each year in the mountains of Kusatsu. Smiling, he says that he is more comfortable being outside than in the laboratory. When he was a child, he was always at home reading. He read all the books in the library at his elementary school. His parents were very worried, and decided to have him join the Boy Scouts. This started his lifelong interest in nature, and he continues to be a Boy Scout leader to this day. You never know what will be a turning point in your life, he says.

Nogami also has a message for students who are studying science and engineering.

"Try to broaden your view. Look at things from a wider perspective. In order to do so, it is necessary to go out and observe, get out of the virtual world of the lab. Working with actual objects is essential in all fields of research. While this does not always have to be outdoors, you need to see, touch, and observe. You should be willing to reach out and explore. Such experience increases your motivation to improve your skills and deepen your insight."

Because the world's first successful geochemical prediction of a phreatic explosion was the result of observations at Mount Kusatsu-Shirane, the Kusatsu-Shirane Volcano Observatory was established in 1986 in cooperation with the former Ministry of Health and Welfare and Kusatsu Town. The facility was reorganized and renamed in 2000.

A professor emeritus at Tokyo Tech who specialized in geochemical research of volcanic eruptions. He was the leading expert in submarine volcano research. Osaka passed away in November 2011 at the age of 86. 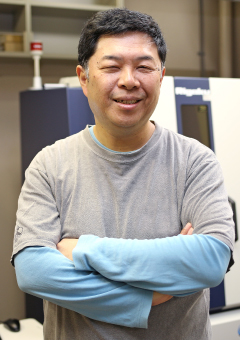