Amidst the non-stop production and consumption of energy all around us, batteries function as practical sources of "canned energy" that can be accessed when needed. For many, the word brings to mind disposable dry-cell batteries — primary batteries — which can come in the form of low-cost manganese, longer-lasting alkaline, or higher-efficiency lithium types. When introduced, lithium batteries quickly found wide application and today power our watches, cameras, and calculators.

"I could have never imagined how much lithium ion batteries would contribute to society when I first started research on lithium in 1980."

Professor Ryoji Kanno has spent more than 30 years synthesizing the inorganic materials that are essential in improving battery performance. In addition to the development of lithium cells, Kanno's research group is currently working on the enhanced functionality of solid oxide fuel cells[1], which are gradually gaining popularity as home-use fuel cells, and the development of energy conversion systems based on an innovative new concept. The group's multifaceted approach to the creation of materials is bearing fruit.

Currently, Kanno is mainly focusing his energy on the development of all-solid-state batteries, which have undoubtedly overturned existing conventions.

Commercialization of all-solid-state batteries as goal

Over 200 years have passed since Alessandro Volta[2] invented the battery in 1800. However, present common knowledge about primary and secondary batteries may soon be a thing of the past. The key to this revolution lies in the electrolytes that conduct electric current.

Electrolytic solution is a core component of commercially available batteries. High-performance lithium batteries apply organic solvent[3] for this purpose. Organic solvent, however, is combustible, creating safety concerns. The all-solid-state batteries being developed by Kanno replace organic solvent with solid material, significantly improving safety while making it possible to handle larger amounts of electricity. The travel distance of an electric automobile utilizing this type of battery, for example, can be increased from 200 km to 500 km on a single charge. A more compact design is also possible as all-solid-state batteries do not require the safety devices required for organic solvent.

"Solidity reduces combustibility and increases safety. Furthermore, all-solid-state batteries function over a wide range of temperatures and easily pass current to provide increased power. Quick recharge is also a feature. While all-solid-state batteries have great merits, their one disadvantage is in initiating a contact because, unlike organic solvent, contact requires an interface. If we can solve this problem, the goal of commercialization will be within reach."

Finding the best material to initiate contact was the key to a new chapter in the history of batteries. Amidst the fierce competition that takes place in the world of material development, Kanno was the first to identify the right one. 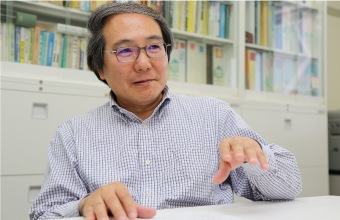 In 2011, a research group composed of Kanno and colleague Masaaki Hirayama (associate professor at Tokyo Tech), Toyota Motor Corporation, and the High Energy Accelerator Research Organization (KEK) created the world's first lithium superionic conductor (Li10GeP2S12) capable, at room temperature, of conducting lithium ions faster in solid state than in liquid state. This lithium superionic conductor exhibits twice the conductivity of existing lithium ion conductors and ionic conductivity that surpasses organic solvent, the electrolyte used in existing lithium ion secondary cells. Needless to say, this discovery accelerated the development of all-solid-state batteries. The incombustibility and safety together with increased conductivity were key elements in the commercialization of electric automobiles and the improvement of hybrid vehicle performance, and caused excitement in the world of next-generation high energy density battery research.

"In the battery-related world, the most significant change after mobile phones and computers will be seen in automobiles. Along with innovations in transportation, it is necessary to develop an alternative to fossil fuels with an eye on power, safety, stability, and eco-friendliness. I believe that we as materials experts need to realize the potential of rechargeable batteries as that alternative. This is our chance to show our knowledge and ability."

Breakthrough with knowledge from different fields

Researchers involved in materials development often call themselves "materials experts" or "synthesis experts." Kanno's background as a researcher, however, is not in materials synthesis only.

After studying inorganic materials synthesis methods such as high-pressure synthesis[4] at Osaka University, Kanno moved to the electrochemistry laboratory at Mie University to conduct research on lithium in 1980. Although Kanno's doctoral thesis was on lithium ion conductors, Mie University was the starting point for the research that led to solid battery development.

Following this, he moved to Kobe University. It was here that he met Professor Yoji Kawamoto, a well-known researcher of the optical properties of glass. Although from a different field, Kanno was influenced by Kawamoto's views and methods. His experience with Kawamoto led to the development of a thin-film fabrication method[5], one of the material research methods that Kanno and his laboratory staff are fascinated with. In 2001, Kanno joined Tokyo Tech where he continues his research on the border of materials synthesis and electrochemistry.

"Our laboratory has grown to more than 40 staff members and students. We have seen definite progress in each area of research — materials development, solid batteries, thin film synthesis, and improvement of fuel cell performance. I feel it is soon time to reap what we have sown. We continue to further our high-quality research on materials creation which may well bring a few surprises to the world."

Seeking results in your field of interest leads to satisfaction 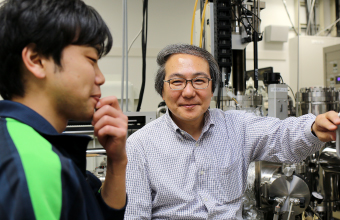 Materials development can take ten years, while commercialization may require another ten or twenty. The development of rechargeable batteries, too, has been an exercise in true commitment and perseverance. Due to Kanno's extraordinary efforts in the past, his message to current Tokyo Tech students carries great weight.

"I believe that following your interests is of paramount importance in achieving results. Setting your goal is the first step. Once it is set, you must wholeheartedly continue moving toward it. These two elements are the keys to success. If your position and environment allow you to work towards your goal, then you have already achieved a certain happiness. My experience tells me that this is true."

Kanno describes his own goal as contributing to society through the development and commercialization of rechargeable batteries utilizing the materials he has created. In addition to unleashing personal happiness, the realization of products packed with the spirit and conviction of researchers like Kanno brings joy and contentment to the lives of others.

High-efficiency home-use fuel cells which generate electricity through the chemical reaction of oxygen and hydrogen, with exhaust heat used to boil water. Also known as SOFCs.

Italian physicist known as the inventor of the electrical battery. Utilized zinc and copper as electrodes, and water with either sulfuric acid or sodium chloride as electrolysis solution.

Organic chemical compound capable of dissolving substances such as ethanol, benzene, and chloroform, which are normally insoluble in water. Liquid state at ordinary temperatures and pressures.

Synthesis method that involves heat treating raw ingredients under gigapascal level pressure (GPa = 109 Pa) in a sealed pressure medium. The difference in compressibility between the positive and negative ions of constituent elements, or transfer to high density phases makes it possible to synthesize superconductive materials that cannot be synthesized under normal pressure. 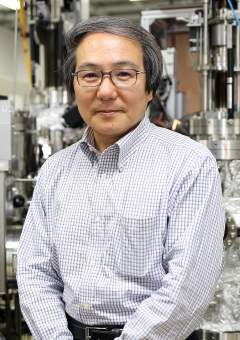