"We live in a peaceful world. If you want to achieve great things, however, you really have to think outside the box."

Professor Yoshinori Ohsumi is a soft-spoken man who speaks dispassionately. Behind the calm exterior, however, is a man on a mission.

The Inamori Foundation's 28th Kyoto Prize presentation ceremony was held on November 10, 2012. Candidates for the prize are individuals or groups who have made lifetime contributions to the development of science, technology and the arts. Professor Ohsumi was among the recipients. He was the first person in the world to visually observe the function of autophagy (self-cannibalization), whereby cells placed in a state of starvation degrade parts of themselves to serve as nutrient sources and so stave off starvation. He then elucidated the mechanism of autophagy and the genes involved.

Professor Ohsumi initially studied yeasts. However, he concluded that the phenomenon of autophagy was not confined to yeasts, but is one of the most basic cell functions found in a variety of organisms, from plants right up to humans. This set off the current boom in research into autophagy around the world. Publications on autophagy have grown from around ten per year in the early 1990s, to over 2000 per year at present, and the number continues to grow rapidly. 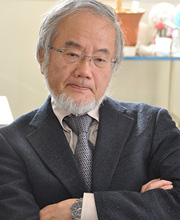 Professor Ohsumi describes the situation this way:
"As research into autophagy has expanded, it has become clear that it is not simply a response to starvation. It also contributes to a range of physiological functions, such as inhibiting cancer cells and aging, eliminating pathogens and cleaning the insides of cells. We have also begun to see a small explosion in research that demonstrates a new function with the knocking out genes that contribute to autophagy. However, there is still much we do not know about the mechanism of autophagy and this calls for serious study. I hope to go on to study autophagy at the molecular level, to tackle the mechanism head-on. That is my mission."

The challenge of doing what no one else is doing

Professor Ohsumi became involved with autophagy in 1988. After earning his Doctor of Science in Physiology from the Graduate School of Science at the University of Tokyo, he worked as a postdoctoral fellow at the Rockefeller University in the US. He returned to the University of Tokyo, working first as a research associate and then as a lecturer in the Faculty of Science. In 1988 he was appointed associate professor in the College of Arts and Sciences at the University of Tokyo at the age of 43. This was the first laboratory that he ran. He had been working on the transport of materials to the vacuoles in yeasts in the Botany Laboratory under Professor (now Emeritus Professor) Yasuhiro Anraku, but decided to turn this over to Professor Anraku's laboratory and set out on a new project. It was then he decided to elucidate the mechanism of the the degradative function of the vacuoles in yeasts, which later tied in to his research on autophagy.

"While working in Professor Anraku's laboratory, I chose the transport of materials to the yeast vacuoles as my research project, because no one else was studying it," Professor Ohsumi said.

Vacuoles are a type of organelle in living things and they are limited by vacuolar membranes. They are filled with cell sap (or mostly salts solution). Especially they account for around 90% of the cell volume in plants. Back in the 1980s, vacuoles were simply regarded as inert organelles and the repositories of wastes in the cells. 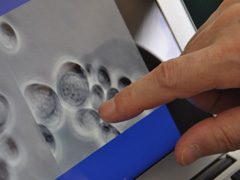 However, when Ohsumi was attempting to isolate the nuclei in yeast cells as a postdoctoral fellow at the Rockefeller University, he found a layer of clearly concentrated organelles at the top layer in centrifuge tube that was to be discarded, and noticed that these were vacuoles. He wondered whether or not these vacuoles played an important role in the cells.

Upon leaving Rockefeller University and returning to the Faculty of Science at the University of Tokyo, Ohsumi began serious research into yeast vacuoles. He was the first to discover that yeast vacuoles actively transport substances such as amino acids and play a role in the homeostasis of metabolites and ions. This brought him considerable success and has shaped his approach to research, that of undertaking what no one else was doing, ever since.

"I started out with a love of the microscope. Vacuoles are the only organelle visible under the light microscope, and I often observed them. My observations under the microscope were the main reason I was able to discover these hitherto unknown functions of vacuoles," he said. 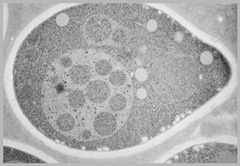 Yeast vacuole in a state of starvation, as seen with an electron microscope. The large white circles inside the cell are vacuoles and we know that a portion of the cellular material is found inside them.

"Doing something no one else is doing" was also the motivation behind choosing to elucidate the mechanism of lytic function of yeast vacuoles when be branched out on his own in 1988. Vacuoles are organelles that not only store waste materials inside cells, but also contain various degradative enzymes. However, what was degraded inside the vacuoles, and how it was done, were still complete mysteries in those days.

At first, Professor Ohsumi considered whether it would be possible to observe what was occurring inside the vacuole under a microscope. In the absence of nutrients, yeasts fall into a state of starvation. Next they then turn to forming spores inside the cells, which allows the cells to ride out the starvation. He thought that if vacuoles had a degradative function, it would probably become most active in a state of starvation when the cells were forming spores. If it were possible to halt the lytic function in the vacuoles, it should then be possible to discover what was being degraded.

He procured mutant yeasts, which had no hydrolytic enzymes in their vacuoles, and using a light microscope he began observing what occurred in the vacuoles during the state of starvation. This was when he discovered autophagy. 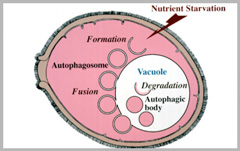 "When I observed yeasts that had been starved for several hours, I found that large numbers of small granules accumulated inside the vacuoles and that they were highly mobile. The granules were single-membrane bound structures which contain a portion of cytoplasmic materials. The granules were drawn into the vacuoles and presented the appearance of Brownian movement. The Brownian movement occurred because yeasts contain so small amount of proteins and are low in viscosity. This made a great impression on me and I spent hours watching them," Ohsumi said.

This was the first time anyone had actually seen the working of the autophagous function of vacuoles. When the degradative enzymes in the vacuoles are present and working normally in a yeast cell, any cellular material collected in the vacuole is immediately degraded. Hence no one had ever seen this before. These days, light microscopes provide 2250x magnification, but in those days, the maximum was 600x. Professor Ohsumi laughed and said "I'm lucky. I might not have noticed them if they hadn't been moving."

Ohsumi then went on quietly, "All my research findings started from observations with a microscope. So even now, I always get the students who come to my laboratory to work with a microscope. In one sense, this should be the way biology is done and I believe that phenomena themselves are important. I want my students to naturally confirm things with their own eyes and hopefully make new discoveries with their own eyes too." 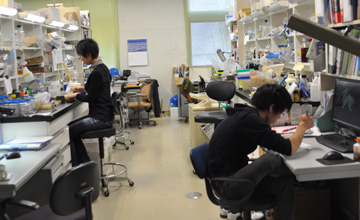 Do the things you find truly interesting 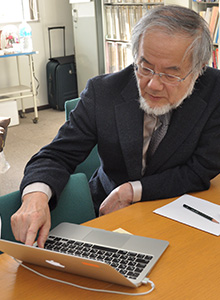 After his success in witnessing autophagy with a microscope, Professor Ohsumi began work on identifying the genes connected with autophagy. Autophagy genes are now known as ATG genes. A total of 18 ATG genes have been discovered.

In 1996, Professor Ohsumi transferred to the National Institute for Basic Biology in Okazaki, Aichi Prefecture, which has the necessary staff and equipment to elucidate the functions of the proteins that are encoded by the ATG genes. Several years later, with the assistance of research workers at the Institute, Professor Ohsumi was able to show autophagy to be one of the most basic functions of the cells of many plants and animals. In recognition of this string of successes, he was awarded the Fujihara Award, the Japan Academy Prize and the Asahi Prize between 2005 and 2008. He also received the Kyoto Prize for Basic Sciences in 2012.

Finally, Professor Ohsumi offered this message to the next generation:
"Today's young people approve of 'research in the service of humanity,' while maintaining a steady and conservative outlook. That calls for research on humans rather than on yeasts or mice. However, you can answer the most basic and important questions about the nature of life through yeasts. My research was able to explain autophagy precisely because I was working on yeasts and could observe them under an electron microscope. Basically, it's not easy to define what will serve humanity - nuclear power is a good example. So my message to all of you, who want to pursue a career in science, is to do what no one else is doing, and do what you find truly interesting. Research isn't easy. However, if you're really drawn to a subject and you're interested in it, you'll certainly overcome all the obstacles, even if, say, your work isn't appreciated for a time. You only live once. Others aren't interested in trivia. In the end, you have to want to taste the pleasures of success after all is said and done." 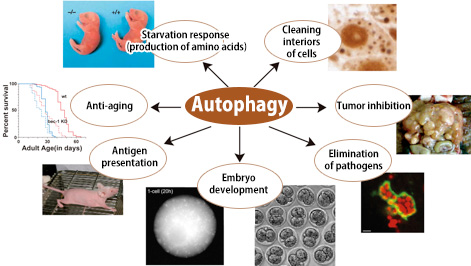 Autophagy can be seen in every single organism, from plants to human beings. It is one of the most basic functions of cells. It has become clear that it is not simply a response to starvation, but also contributes to a variety of physiological functions: inhibiting cancer cells, inhibiting aging, eliminating pathogens and cleaning the insides of cells. 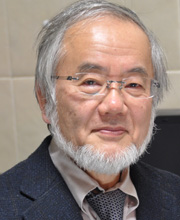