Are we more bacteria than human?

"A wide range of bacteria live in the human body. There are somewhere in the neighborhood of one thousand different types, and some 10 to 100 trillion total bacteria in each of us. The number of cells in the human body is 38 trillion, so bacteria, while being living entities of their own, are not foreign substances. They are an essential part of us," says Associate Professor Takuji Yamada, a leading researcher of intestinal environments.

"Although the influence of these bacteria is not yet completely known, it is natural to think that they are somehow involved in all activities within the body because normal bacterial flora account for nearly half of all our cells. Recently, genomic analysis1 has become a key factor in tailor-made medical care2. While the bacteria in our bodies are not related to our individual genome, they replace themselves through continuous replication. In addition, normal bacterial flora differ in each individual. Therefore, in terms of medical care, we need to examine not only the genome but bacteria as well."

Early detection of colorectal cancer through changes in bacteria

Yamada works to identify bacteria in the large intestine with the hope of making significant progress in realizing a method for the early detection of colorectal cancer.

"Normal bacterial flora in the human body total approximately 1.5 kg, and most of these are in the large intestine. Until recently, intestinal bacteria were classified as either good or bad. However, research has revealed that this kind of classification is too simplistic. There are many unknown bacteria whose influence on the body is not yet fully understood. Therefore, I decided to focus on the relationship between intestinal bacteria and colorectal cancer. While the major cause of gastric cancer is Helicobacter pylori, I thought there must be another specific bacteria associated with colorectal cancer."

The number of colorectal cancer patients is increasing in Japan, and it is one of the leading causes of death in the country. The most common examination for the disease — testing for occult blood in stool — is cheap, but test accuracy is low. Only about four percent of patients who test positive for occult blood actually have cancer. Endoscopic examination is more accurate, but has not gained widespread popularity because it is expensive and physically invasive. Yamada felt that looking at bacteria in the intestine may lead to an easier and safer method for early detection. Recent research results have boosted his confidence. 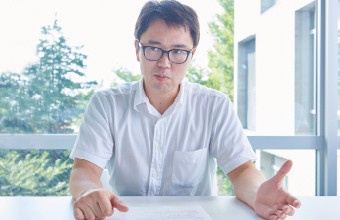 "Research conducted in Europe and the U.S. has revealed that certain bacteria increase in the intestines of progressive colorectal cancer patients, and we are now comparing endoscopic examinations and genetic data of the intestinal environment in cooperation with the National Cancer Center Japan and Keio University," Yamada explains.

Early detection of colorectal cancer allows for early intervention, which increases the survival rate and significantly reduces physical burden. An international consortium involving partners in Japan, the U.S., and Europe collects data on patients in different countries, which may help clarify intestinal environment changes particular to the Japanese.

"Research on the intestinal environment has progressed in the right direction, and I already feel that we are close to realizing success in the early detection of colorectal cancer by utilizing our findings."

Bioinformatics has changed the study of biology

Bioinformatics, an area of science developed through the integration of biology and informatics, has played a significant role in the progress of research. Bioinformatics combines experiments and measurement technology utilizing computers for biological research. It was established as an academic field in Japan around the year 2000. Since then, Yamada has been active at the forefront of the field.

"As with other academic fields, the field of biology involves a significant amount of experimentation. Of course, experimentation is always important, but high-throughput experimental techniques have become more common in the past twenty years, and the amount of data obtained from these fundamental experiments is tremendous. Therefore, it was essential to integrate informatics with biology to analyze these colossal amounts of data."

Take, for example, human genes, which are composed of a sequence of DNA base pairs3 linked together like a chain. The human genome is composed of over three billion base pairs. 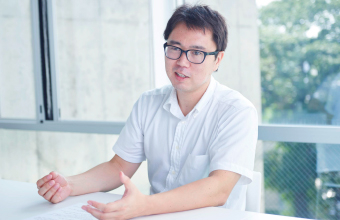 "Genomic analysis consists of many techniques, one of which is comparison with other genes discovered in organisms. It is like looking for 100 letters (i.e. already known genes) in a pile of three billion letters. Analysis requires a method of extracting those 100 letters from the huge pile."

As explained by Yamada, bioinformatics starts from the input and organization of obtained data into a database. In biology, obtaining experimental data has always been key. The accumulated data, however, has grown to a massive three billion letters, and analysis and extraction of meaning has become difficult. As a result, computer analysis has become crucial, and thinking has now shifted significantly — the focus is less on simply obtaining data, and more on how to effectively analyze that data.

Research is done through teamwork, but someone must be in the driver's seat to make decisions about the direction of research. When a research team is "driving their car," the driver steers while the passengers serve as navigators or fill other supporting roles. In the past, researchers in experimental biology were the drivers while researchers in bioinformatics supported research from the passenger seat.

"This was because researchers in bioinformatics had difficulty designing experiments from a biological point of view. Today, however, researchers specializing in informatics often sit in the driver's seat and take the initiative with fresh ideas and new perspectives," says Yamada. 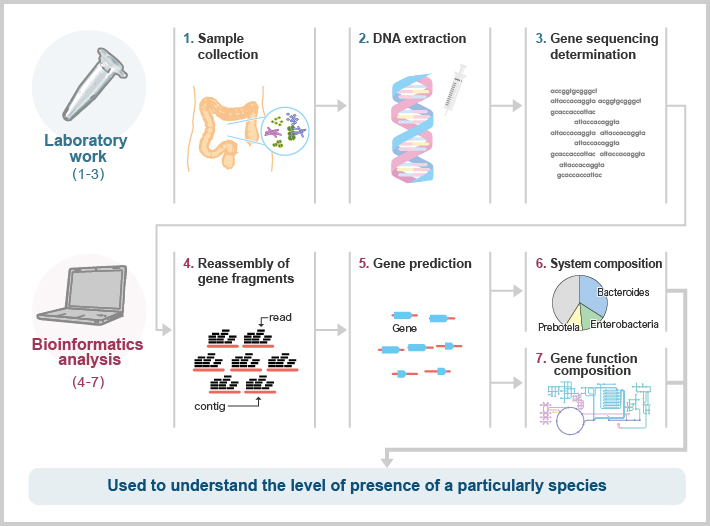 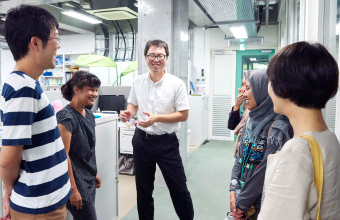 Yamada focused on the humanities until high school. Since his kindergarten days, however, he was also curious about the relationship between thought and body, which, in the end, led him to biology.

"When we want to move our right hand, it moves, but we cannot move someone else's right hand. I was very curious about this. 'What is the relationship between our thought and our body? How about other organisms?' I asked, but no one could give me a satisfactory answer."

With these questions on his mind when entering high school, Yamada's interests shifted from the humanities to science, and he chose to study biology at university. Since then he has been active in the field, and more recently the development of talented individuals who support and build on his research has become one of his top priorities.

Yamada is actively engaged in expanding the field of biology and cultivating next-generation researchers within and beyond Tokyo Tech. At the end of the Annual Conference of the Japanese Society for Bioinformatics held from September 29 to October 1, 2016, he held an open lecture to disseminate information on bioinformatics to the general public. He also invited high school students to hold presentations on the theme of "Bioinformatics research 30 years from now." Yamada was encouraged by what he saw and heard. Perhaps reminded of his own burning curiosity in high school, Yamada is now fully involved in providing the younger generation with a chance to consider their own future by urging them to 'dive in' and engage in research.

"If intellectual space is circular, then the role of science is to keep expanding this circle. I believe that, as a researcher, I should stand at the circle's edge and continue pushing its boundaries while maintaining an environment in which other researchers can grow and expand, too. I don't know what we will find as we push these boundaries, but I do know that I am very excited about a new future. I'm sure it will be filled with wonder." 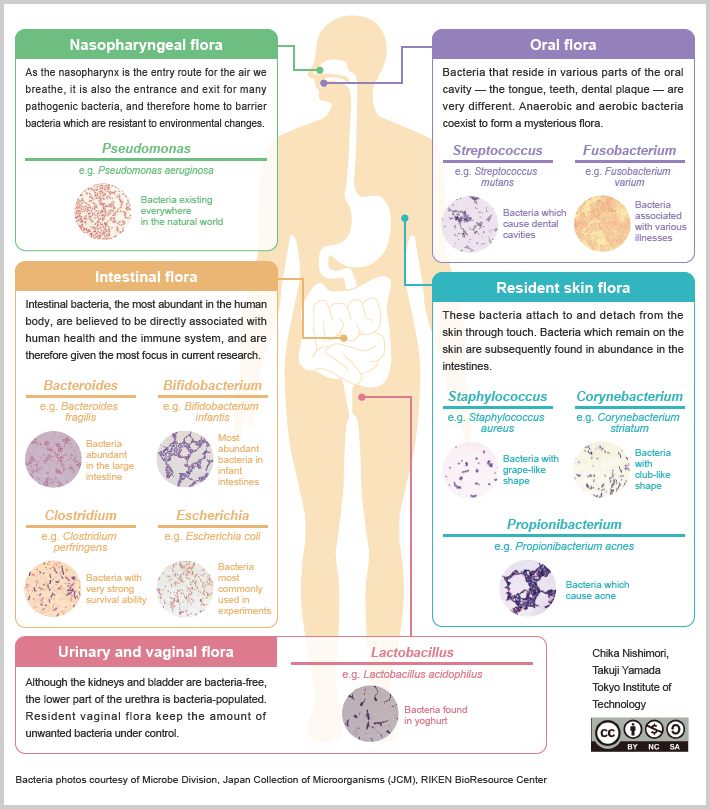 A genome is the genetic material of an organism. Genomic analysis seeks to discover the characteristics of an organism using its genetic information. Generally, the analysis involves comparison with related species.

A base pair is a unit consisting of two deoxyribonucleic acids bound to each other by hydrogen bonds. The base pair is formed by adenine and thymine (or uracil), or guanine and cytosine. The length of genomes and genes is expressed as "x base pairs (bp)." 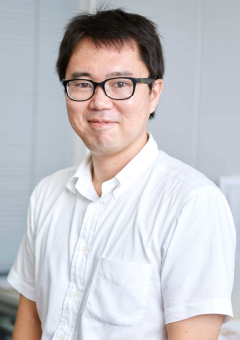