A large, unconventional anomalous Hall resistance in a new magnetic semiconductor in the absence of large-scale magnetic ordering has been demonstrated by Tokyo Tech materials scientists, validating a recent theoretical prediction. Their findings provide new insights into the anomalous Hall effect, a quantum phenomenon that has previously been associated with long-range magnetic order. 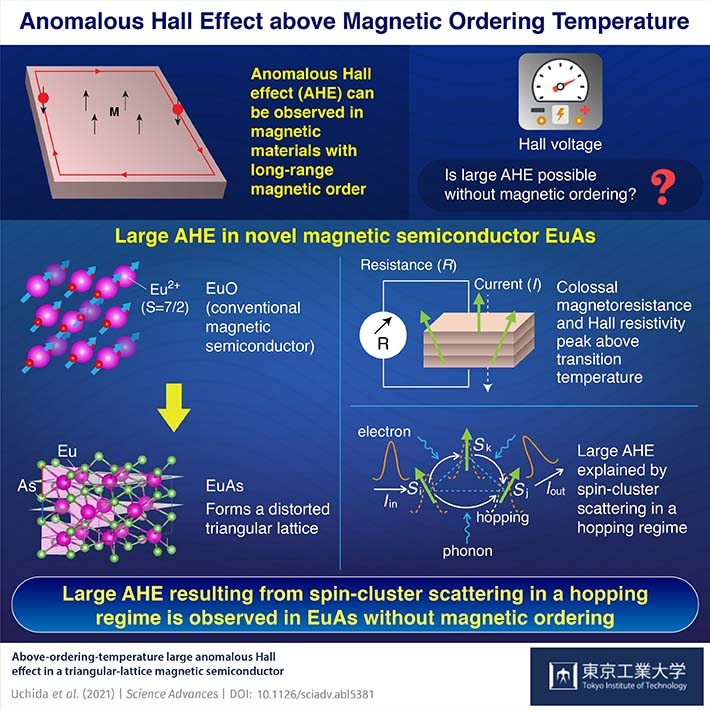 Charged particles such as electrons can behave in interacting ways when moving under the influence of electric and magnetic fields. For instance, when a magnetic field is applied perpendicular to the plane of a current-carrying conductor, the electrons flowing within start to deviate sideways due to magnetic force and soon enough, a voltage difference appears across the conductor. This phenomenon is famously called the "Hall effect." However, the Hall effect does not necessarily require fiddling with magnets. In fact, it can be observed in magnetic materials with long-range magnetic order, such as ferromagnets, for free!

Named "anomalous Hall effect" (AHE), this phenomenon appears to be a close cousin of the Hall effect. However, its mechanism is way more involved. Currently, the most accepted one is that the AHE is produced by a property of the electronic energy bands called "Berry curvature," which results from an interaction between the electron's spin and its motion inside the material, more commonly known as "spin-orbit interaction."

Is magnetic ordering necessary for AHE? A recent theory suggests otherwise. "It has been theoretically proposed that a large AHE is possible even above the temperature at which the magnetic order vanishes, especially in magnetic semiconductors with low charge carrier density, strong exchange interaction between electrons, and finite spin chirality, which relates to the spin direction with respect to the direction of motion," explains Associate Professor Masaki Uchida from Tokyo Institute of Technology (Tokyo Tech), whose research focus lies in condensed matter physics.

Curious, Dr. Uchida and his collaborators from Japan decided to put this theory to the test. In a new study published in Science Advances, they investigated the magnetic properties of a new magnetic semiconductor EuAs that is only known to have a peculiar distorted triangular lattice structure and observed an antiferromagnetic (AFM) behavior (neighboring electron spins aligned in opposite directions) below 23 K. Furthermore, they observed that the material’s electrical resistance dropped dramatically with temperature in the presence of an external magnetic field, a behavior known as "colossal magnetoresistance" (CMR). However, more interestingly, the CMR was observed even above 23 K, where the AFM order vanished.

"It is naturally understood that the CMR observed in EuAs is caused by a coupling between the diluted carriers and localized Eu2+ spins that persist over a wide range of temperatures," comments Dr. Uchida.

What really stole the show, however, was the rise in Hall resistivity with temperature, which peaked at a temperature of 70 K, far above the AFM ordering temperature, demonstrating that large AHE was indeed possible without magnetic order. To understand what caused this unconventionally large AHE, the team performed model calculations, which showed that the effect could be attributed to a skew scattering of electrons by a spin cluster on the triangular lattice in a "hopping regime" where the electrons did not flow but rather "hopped" from atom to atom.

These results bring us one step closer to understanding the strange behavior of electrons inside magnetic solids. "Our findings have helped shed light on triangular-lattice magnetic semiconductors and could potentially lead to a new field of research targeting diluted carriers coupled to unconventional spin orderings and fluctuations," comments an optimistic Dr. Uchida.

Indeed, new discoveries in the endlessly fascinating quantum world of electrons might be on the horizon!