Large moons may be a clue for habitable planets

Earth's moon is vitally important in making Earth the planet we know today: the moon controls the length of the day and ocean tides, which affect the biological cycles of lifeforms on our planet. The moon also contributes to Earth's climate by stabilising Earth's spin axis, offering an ideal environment for life to develop and evolve. 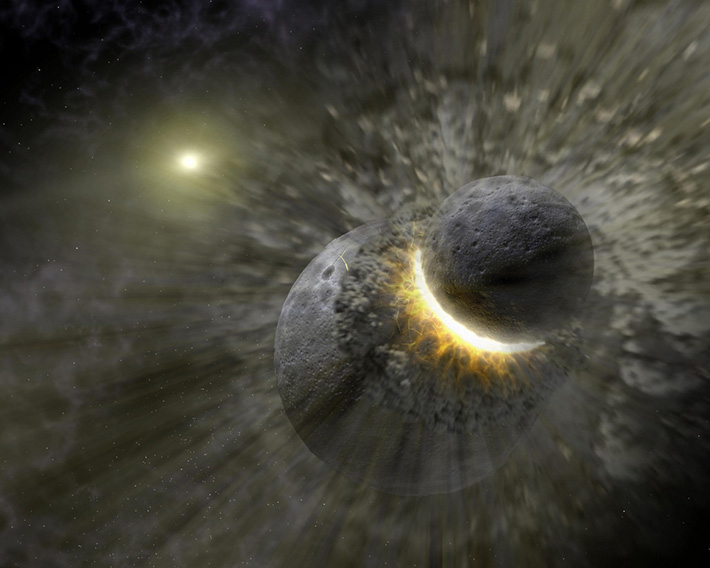 Because the moon is so important to life on Earth, scientists conjecture that a moon may be a potentially beneficial feature in harbouring life on other planets. Most planets have moons, but Earth's moon is distinct in that it is large compared to the size of Earth; the moon's radius is larger than a quarter of Earth's radius, a much larger ratio than most moons to their planets.

A new study conducted by the research team examined moon formation and concluded that only certain types of planets could form moons that are large in respect to their host planets. The team says by understanding moon formations, they have a better constraint on what to look for when searching for Earth-like planets. They expect that exomoons [moons orbiting planets outside our solar system] should be everywhere, but so far, no confirmation of any.

Many scientists have historically believed Earth's large moon was generated by a collision between proto-Earth—Earth at its early stages of development—and a large, Mars-sized impactor, approximately 4.5 billion years ago. The collision resulted in the formation of a partially vaporised disk around Earth, which eventually formed into the moon.

In order to find out whether other planets can form similarly large moons, the research team conducted impact simulations on the computer, with a number of hypothetical Earth-like rocky planets and icy planets of varying masses. They hoped to identify whether the simulated impacts would result in partially vaporised disks, like the disk that formed Earth's moon.

The research team found that if the planet is too massive, these impacts produce completely vapour disks because impacts between massive planets are generally more energetic than those between small planets. After an impact that results in a vaporised disk, over time, the disk cools and liquid moonlets—a moon's building blocks—emerge. In a fully-vaporised disk, the growing moonlets in the disk experience strong gas drag from vapour, falling onto the planet very quickly.

"In contrast, if the disk is only partially vaporised, moonlets do not feel such strong gas drag," said Hidenori Genda, Associate Professor at the Earth-Life Science Institute (ELSI), co-author of the study.

"The question we set out to answer is: Can all planets form substantial moons?" said study co-author Erik Asphaug, a professor at the University of Arizona, Lunar and Planetary Laboratory.

"As a result, we conclude that a completely vapour disk is not capable of forming fractionally large moons," said lead study author Miki Nakajima, an assistant professor of the Department of Earth and Environmental Sciences at the University of Rochester. "Planetary masses need to be smaller than those thresholds we identified in order to produce such moons."

The constraints outlined by Nakajima and her colleagues are important for astronomers investigating our universe; researchers have detected thousands of exoplanets and possible exomoons, but have yet to definitively spot a moon orbiting a planet outside our solar system.

This research may give them a better idea of where to look.

"The exoplanet search has typically been focused on planets larger than six earth masses. We are proposing that instead, we should look at smaller planets because they are probably better candidates to host fractionally large moons," said Nakajima. 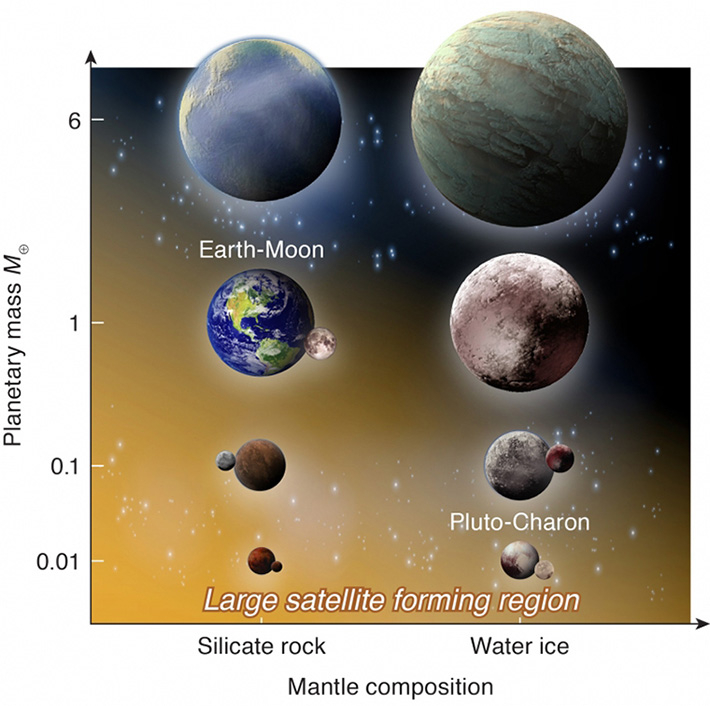 For rocky planets whose size exceeds that of Earth by 60%, or whose mass is greater than six times that of Earth (the top planet on the left), and for icy planets more than 30% larger than the Earth, or one Earth-mass (the top two planets on the right) it is not possible to form sizable moons by giant impacts, according to the new study. No such "super-Earths" exist in our solar system, so the prediction applies to astronomical searches of planets around other stars. The prediction is consistent with planet-moon systems in the solar system, including Earth-moon (left) and Pluto-Charon (right) that are shown here. Credit: Nakajima et al., Nature Communications