In a first, a dye-sensitized photocatalyst that facilitates the most efficient solar water splitting activity recorded to date (for similar catalysts) has been optimized by researchers from Tokyo Tech. Their surface-modified, dye-sensitized nanosheet catalyst shows immense potential, as it can suppress undesirable back electron transfer and improve water splitting activity up to a hundred times! 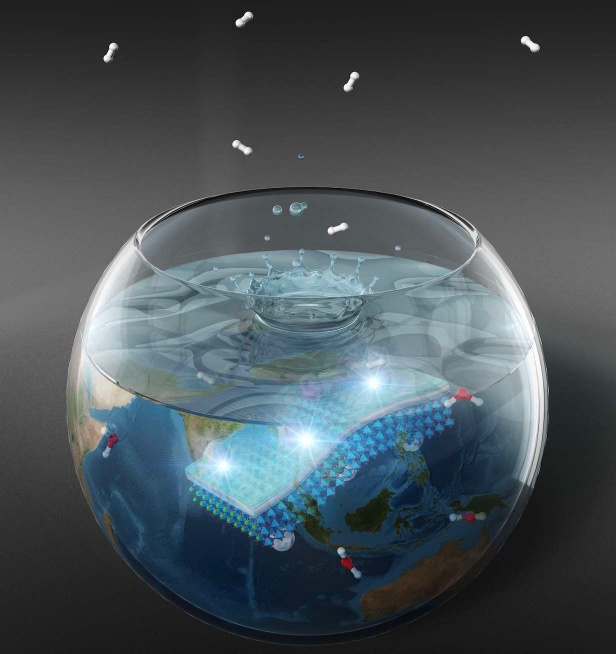 One of the simplest ways by which water molecules can be split into hydrogen is by using photocatalysts. These materials, which are semiconductors that can absorb light and carry out water-splitting reactions simultaneously, provide a simple setup for the mass production of hydrogen. Semiconductors can generate an electron-hole pair for the water splitting reaction; however, since the charge carriers tend to recombine, a "Z-scheme" photocatalytic system involving two semiconductor materials and an electron mediator has been developed to suppress this.

In this setup, the electron mediator, which is typically a reversible electron acceptor/donor pairs (such as I3-/I-), accepts electrons from one of the photocatalysts and donates them to the other. This separates the charge carriers between the semiconductors. Despite eliminating the charge recombination within the semiconductor, the electron-accepting species (I3-) competes with the hydrogen photocatalyst for electrons, resulting in poor solar-to-hydrogen energy conversion efficiencies.

To improve hydrogen production, a team of international researchers, including Specially Appointed Assistant Professor Shunta Nishioka and Professor Kazuhiko Maeda from Tokyo Institute of Technology (Tokyo Tech) has been working on ways to prevent the unintended electron transfer. On experimenting with ruthenium (Ru) dye-sensitized niobate photocatalysts (Ru/Pt/HCa2Nb3O10), the researchers noticed that hydrogen production increases significantly at low I3- concentrations. These findings led them to develop an efficient water splitting system that consists of an oxygen evolution photocatalyst and a modified Ru dye-sensitized niobate nanosheet that functions as a better hydrogen evolution photocatalyst. "We have successfully improved the efficiency of a Z-scheme overall water splitting system by using a surface-modified dye-sensitized nanosheet photocatalyst," says Prof. Maeda. The results of their study have been published in the journal Science Advances.

To keep the I3- concentration in the reaction system low, a PtOx/H-Cs-WO3 photocatalyst is used as the oxygen evolution catalyst. At the same time, Al2O3 and poly(styrenesulfonate) (PSS) is added to suppress the back electron transfer from the semiconductor to the oxidized Ru complex and the I3- ion, respectively. This design enables more electrons to participate in the hydrogen evolution reaction, resulting in the most efficient Z-scheme water splitting system to date (Figure 1). "The surface modification of the dye-sensitized nanosheet photocatalyst improved the solar water splitting activity by nearly 100 times, making it comparable to conventional semiconductor-based photocatalyst systems," says Prof. Maeda. 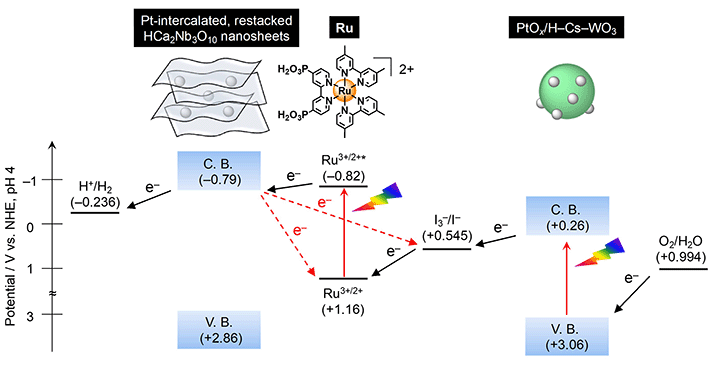 With the back electron transfer suppressed, the developed photocatalyst could also maintain hydrogen production at low light levels, giving it an edge over other photocatalysts that require high light intensities. Moreover, by minimizing the impact of the back electron transfer reactions, the researchers have not only set a new benchmark for dye-sensitized photocatalysts for Z-scheme water splitting, but also laid the framework to improve other dye-sensitized systems that are used for other important reactions such as CO2 reduction.