The mystery of the unclear biological significance of the ferredoxin/thioredoxin pathway in plants has finally been solved by researchers from Tokyo Tech using CRISPR/Cas9. The researchers show that the pathway is important for light-dependent activation of enzymes, photosynthesis in leaves, and normal growth in plants. 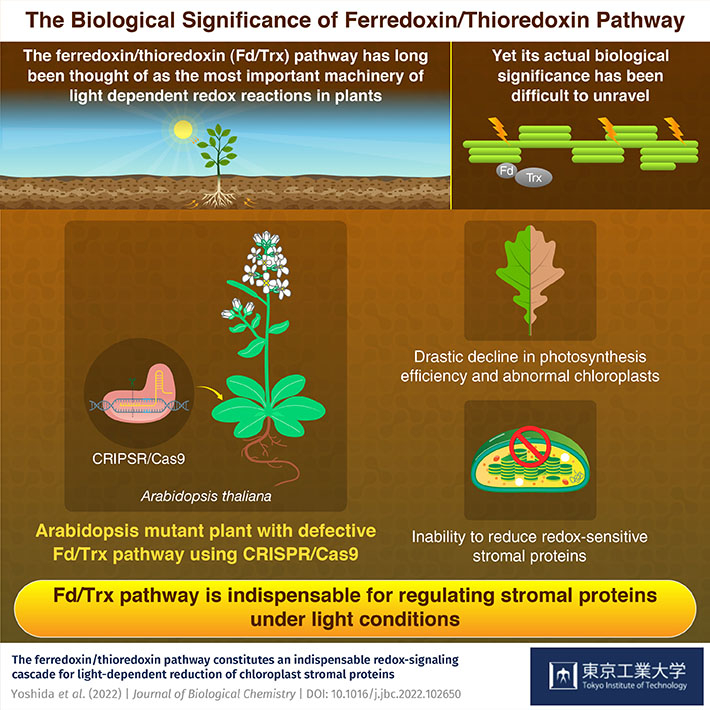 Photosynthesis is one of the most important chemical reactions, not just for plants but also for the entire world. The impact and thus the importance of photosynthesis can scarcely be underestimated. Thus, it makes sense that science has long been fascinated by the reactions and physical phenomena that make photosynthesis occur. One of these phenomena is the ferredoxin/thioredoxin (Fd/Trx) pathway.

Discovered around half a century ago, the Fd/Trx pathway has long been credited with regulating many light dependent reactions in chloroplasts, the organ in the leaf where photosynthesis occurs. It has long been considered that the Fd/Trx pathway is extremely important to plants, as it activates several enzymes in chloroplasts, as a response to light. Yet, these assumptions have been challenged due to two reasons. The first is due to the discovery of other pathways in the leaf that could also activate chloroplast enzymes. The second is because thus far, there have been no studies that have examined how suppression of the Fd/Trx pathway affects plants.

To solve this problem a team of researchers from the Tokyo Institute of Technology (Tokyo Tech) led by Associate Professor Keisuke Yoshida, used CRISPR/Cas9 technology to create a mutated specimen of the plant Arabidopsis thaliana. This specimen was genetically engineered to make their Fd/Trx pathway completely defective. According to Dr. Yoshida, "By creating a model with a defective Fd/Trx pathway, we were able to uncover its actual biological significance in plants, which has led to some exciting discoveries." The paper was published in Journal of Biological Chemistry.

The researchers looked at these new mutant specimens and compared them to the unmutated plants to see the difference, and thus understand the impact of the Fd/Trx pathway. To assess the role of the pathway in activating light dependent reactions in the chloroplast, the researchers shone different intensities of light on the plants and then checked the states of enzymes in the chloroplast. In the wild, unmutated plant, the enzymes had shifted from an oxidized to a reduced state. In contrast, in the mutated plants, none of the enzymes had changed their state. The mutated plants also showed abnormally developed chloroplasts and reduced ability to photosynthesize. ATP synthase was the only enzyme that showed a reducing response in the mutant strain. This enzyme is key to the synthesis of ATP, the energy storage molecule for all living beings. ATP synthase activation occurred through various pathways and was not affected much by the defective Fd/Trx pathway.

To summarize, the researchers found that the Fd/Trx pathway is indispensable for many light-dependent activation reactions of enzymes in leaves. The Fd/Trx pathway is also important for efficient photosynthesis, which is critical for normal plant growth.

According to Dr. Yoshida, "The insights we gained from this study into the working and importance of the Fd/Trx pathway in plants has given us a deeper understanding of the complex mechanisms that occur within plants. This research also pushes us to look deeper and answer many other questions related to the photosynthesis process so that we can fully understand this awe-inspiring process that powers the entire world."

We look forward to seeing what they will discover next!