IDC, held annually since 1990 to foster and develop creativity, technique, and international experience among young future engineers, rotates to a different location every year. The competition does not place countries or institutions against one another, but instead mixes teams of international students who work together to design and build remotely controlled robots.

After a welcome address by Tokyo Tech President Kazuya Masu, participants from the following institutions formed 11 teams and covered the rules of this year's contest.

This year's competition, called The World Star Hunting Swallow, involved the use of two robots — a sky robot and a land robot, each of which started in their own areas. The playing field consisted of a land area, sky area, insect pool containing balls, wasteland, collection box, and a sky lift. The slopes in the center of the field, which were hampered by pins, included three swallow's nests where teams tried to place the balls. 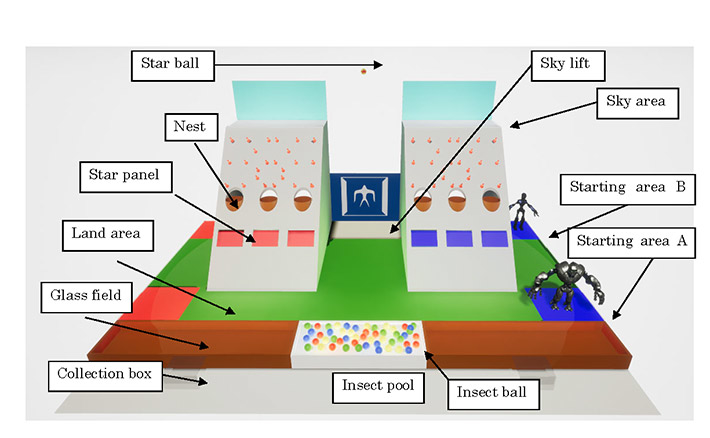 The sky lift in the center of the playing field began ascending 45 seconds after each round began, and stopped as it reached the sky area. This allowed one of the robots to move to a better position if it moved swiftly enough. The maximum combined weight for both robots was 10 kg, and each had to fit into a starting box of 50 cm3. For the first 30 seconds, the first robot could only be controlled by a computer or another robot.

Competitors were allowed to create up to two robots with the materials provided in their starter kits and an additional 2,000 yen. Each round of the contest was 120 seconds long. 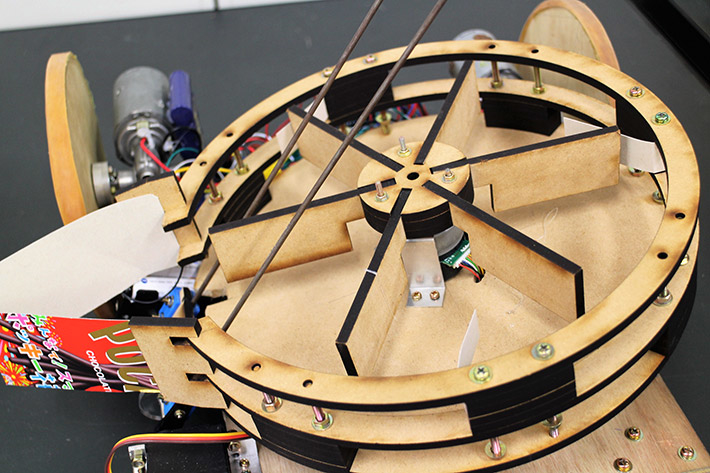 One of this year's creations holds up to six balls in center, which are moved to nests using two rails

On the second day of the contest, each team presented their ideas in front of instructors, who gave feedback on how to improve their creations. At this stage, teams were mainly focused on devising a strategy that would allow them to get their robot to the sky lift before it ascended, and on creating various mechanisms that would allow them to move the sky area ball to a swallow's nest.

In addition to robot design and teambuilding, experiencing different cultures is an important part of IDC. Despite only having ten days for the whole competition, participants managed to take a break from their busy schedule to go sightseeing at some of Tokyo's popular spots midway through the program. 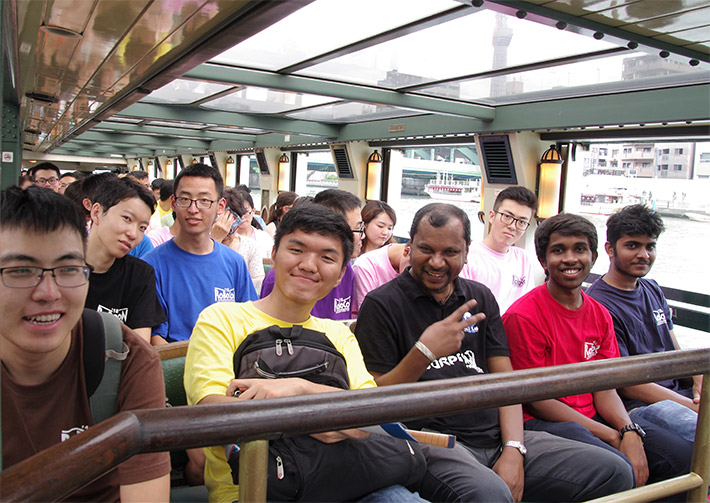 Sightseeing together in Tokyo

On the final day, participants gathered on Ookayama Campus to compete in front of an excited audience, many of whom were elementary school students and their guardians. Many teams struggled to navigate the narrow paths of the playing field, getting stuck on the slope and not making it to the sky lift before it departed. Most of the robots that managed to reach the sky area successfully placed balls into the nests.

Reaching for the star ball above the sky lift

In the final round, the pink team, who demonstrated high reliability throughout the competition, emerged victorious. While their mechanism was simple, it was highly efficient in avoiding the pins blocking the three swallow's nests.

After the competition ended, elementary school students in the audience – potential future IDC participants — were given the chance to test out the winning team's robot. 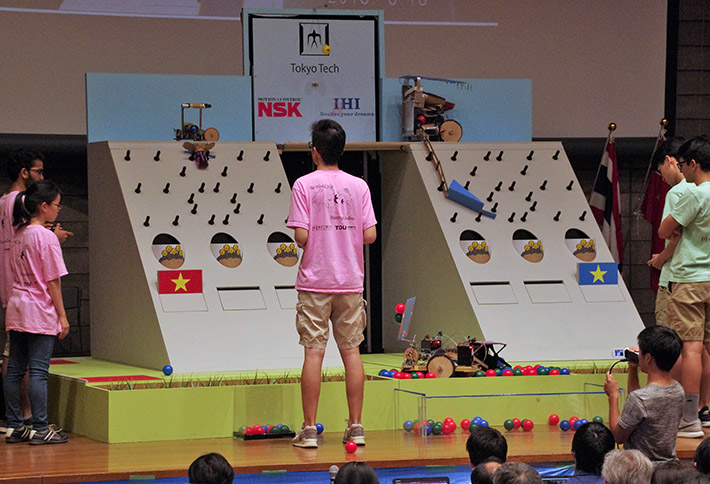 Action during the finals 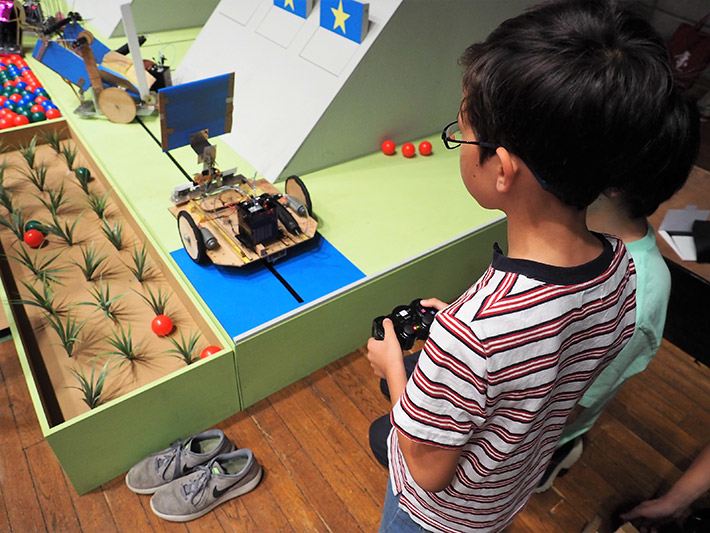 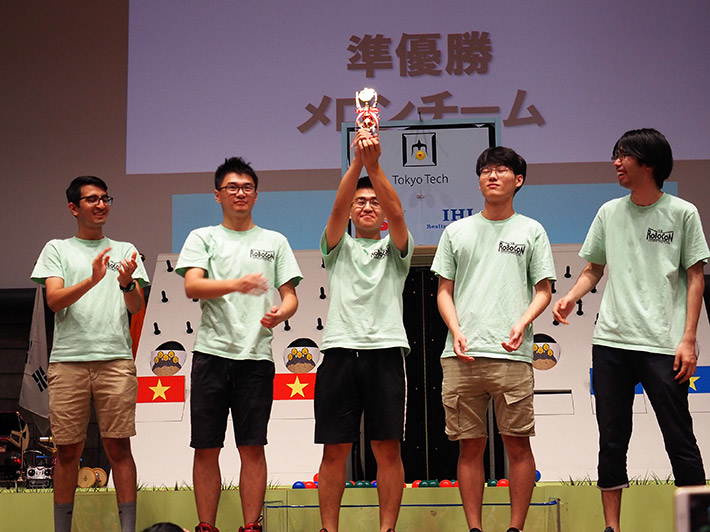 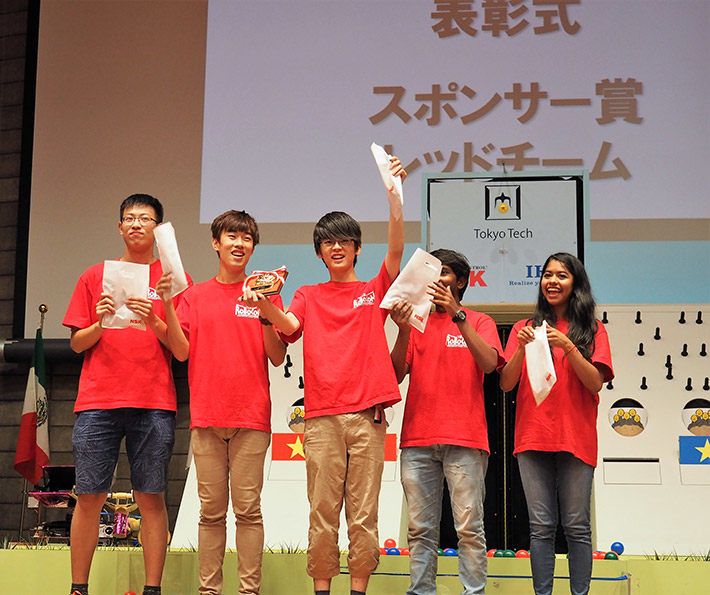 As in previous years, IDC ended with a party where students from around the world put on performances representing their cultures. After an official kagami-wari — a traditional Japanese opening of a sake cask — visiting students and instructors put on a spectacular Latin dance performance. All teams came together in a bon-odori dance to close the event.