The octahedral molecular sieve (OMS-1) is a very powerful manganese oxide-based catalyst, and researchers from Tokyo Tech have found a remarkably simple way to synthesize it. By using a low-crystallinity precursor and a straightforward solid-state transformation method, they managed to produce high-quality OMS-1 nanoparticles. Their unprecedented catalytic performance and durability prove the potential of this novel synthesis approach for developing efficient catalysts and functional materials. 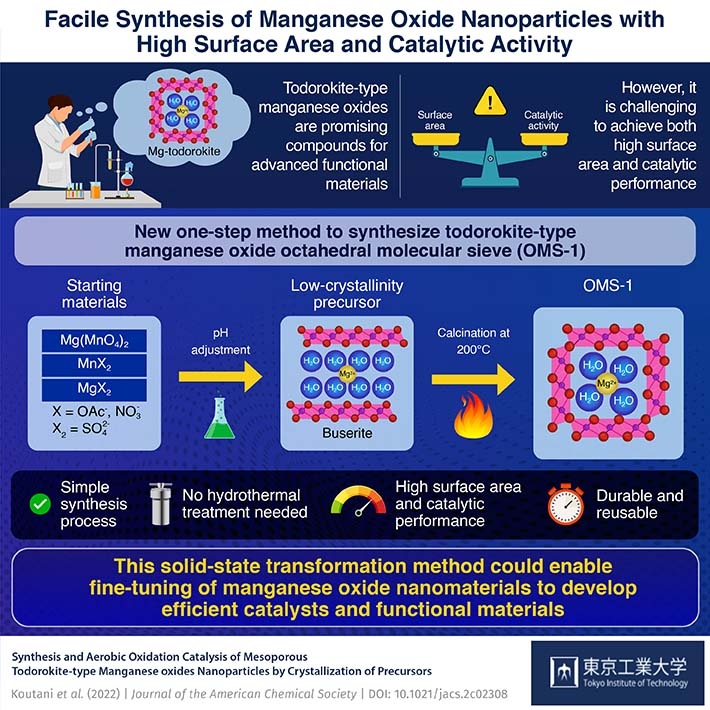 Manganese oxides have received much attention from materials scientists due to their widespread applications including electrodes, catalysts, sensors, supercapacitors, and biomedicine. Further, manganese is widely abundant and has many oxidation states, which allows it to form various interesting crystalline structures.

One such structure is the "todorokite-type manganese oxide octahedral molecular sieve (OMS-1)," a crystal whose unit cells (simplest repeating units of the crystal) consist of three-by-three MnO6 octahedral chains. Though promising as a catalyst, the potential of OMS-1 is limited by two reasons. First, its conventional synthesis methods are complex multi-step crystallization processes involving hydrothermal or reflux treatment. Second, these processes tend to create crystals with a higher particle size and a lower surface area, features detrimental to catalytic performance.

In a recent effort to circumvent these problems, a research team from Tokyo Institute of Technology (Tokyo Tech) came up with a simple way to synthesize OMS-1 nanoparticles. Led by Associate Professor Keigo Kamata, the team discovered that the key to easily producing high-quality OMS-1 was to use precursors with low crystallinity. Their study was published in the Journal of the American Chemical Society. Additionally, the scientific illustration of this study, created by Dr. Kamata, was selected as a Supplementary Cover Art for the journal.

The researchers called their novel synthesis procedure the "solid-state transformation method." In it, one first needs to combine solutions of MnO4– and Mn2+ reagents, such as Mg(MnO4)2 and MnSO4, at specific ratios. After adjusting the pH of the mixture, one needs to collect the precipitates once they settle. These mainly consist of low-crystallinity Mg-buserite, a type of layered manganese oxide. The buserite is then calcinated at 200°C for 24 hours, which transforms it into OMS-1 nanoparticles.

Through various experiments performed using advanced equipment, the team thoroughly characterized the OMS-1 they produced. They determined the optimal parameters to obtain the highest yield of the reaction and the best quality OMS-1. A remarkable aspect of the prepared OMS-1 nanoparticles was their surface area, as highlighted by Dr. Kamata: "Our catalyst exhibited a specific surface area of about 250 m2/g, which is much larger than that of OMS-1 synthesized using previously reported methods, which only went up to 185 m2/g."

To put the synthesized OMS-1 to the test, the researchers investigated its catalytic performance for various alcohol oxidation reactions with oxygen (O2) as the only oxidant. The results were highly encouraging. Dr. Kamata comments: "The OMS-1 synthesized through our approach is an effective and reusable heterogeneous catalyst for the oxidation of various types of aromatic alcohols and sulfides. Despite our nanoparticles being ultra-small, they exhibited no trade-off between surface area, particle size, and catalytic performance."

Overall, the findings of this study shed light on how to better control the synthesis of manganese oxide nanoparticles. These insights will hopefully lead not only to highly efficient catalysts but also to novel manganese oxide-based functional materials with practical applications.