Engineers at the Tokyo Institute of Technology (Tokyo Tech) have demonstrated a computational approach using a ring network of coupled spiking oscillators with chaotic dynamics implemented on analog hardware. This new approach is based on the emergence and pattern formation phenomena that occur under "incomplete synchronization" within chaotic dynamics. In the future, it could significantly impact conventional methods for pattern detection commonly used in artificial neural networks on digital hardware counterparts.

One approach is physical reservoir computing, where an ensemble of dynamical elements exploiting physical phenomena is used to map input data onto a high-dimensional space. The merit of this method is the reduced need for training algorithms that require a large amount of processing power. These reservoirs can often be implemented by very simple physical systems and do not require complex architectures as is the case with neural networks. The circuit that was used in this study, named the Minati-Frasca circuit and initially discovered and developed by researchers at the Universities of Trento and Catania in Italy, is highly elementary, involving only five passive and two active components, while showing rich spiking behavior[1]. "These circuits are truly remarkable and are a natural candidate for physical reservoir computing," says Dr. Hiroyuki Ito, head of the Nano Sensing Unit where the study was conducted.

The experiments performed by the researchers at Tokyo Tech included tuning the chaoticity and coupling strength within a ring network of Minati-Frasca circuits (Fig. 1a). Initially, at low values of a suitable control parameter, the network showed periodic spiking, followed by highly irregular behavior when this parameter was increased (Fig. 1b, left). In combination with sweeping the coupling strength, this operation revealed a rich variety of ways in which the network synchronizes, meaning that nodes within it show similar behavior as can be observed in their waveforms (Fig. 1b, right). Considering the network as a whole, the emergence of synchronization patterns with a preferential synchronization of some node pairs over others, a situation known as incomplete synchronization, can be observed within chaos (Fig. 1c). Furthermore, in the case of this particular network, this region reaches maximal width near the edge of chaos, which is the boundary between periodic and chaotic regions of operation. 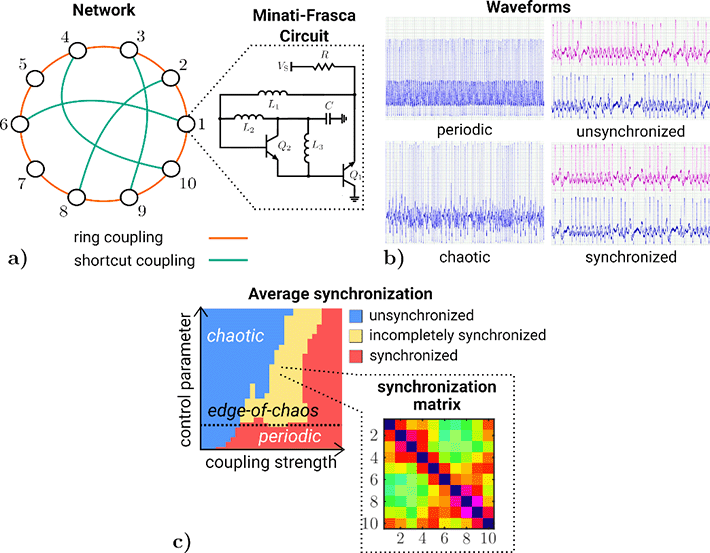 Figure 1. Overview of the network of chaotic oscillators, their generated waveforms and synchronization behaviors.

Figure 2. Effect of coherent noise and heterogeneous populations on the synchronization phenomena of the network and proposed physical reservoir.

a) Effect of coherent noise injected into the network, realized by means of an additional current source. The parameter map shows the difference in average synchronization between no noise and maximal induced noise. b) Splitting the network into two halves, one operating in chaos (A) and the other showing periodic behavior (B), by setting the control parameter differently. Non-monotonic effects are observed from the plot for the periodic half, revealing adversarial road-to-synchronization effects across nodes. c) Hypothetical configuration of the network of chaotic oscillators when used as a reservoir, receiving perturbations on the coupling strengths and the control parameter. Image credit: Jim Bartels.

As such, the researchers considered the network in their study and proposed to use it for implementing reservoir computing in the future by exploiting the various phenomena that were described above (Fig. 2c). "Coming from a background of machine learning, the couplings within the network reminded me of working with neural networks. However, at first I was not able to understand the implications of changing dynamics and chaos, since conventional AI algorithms tend not to have their innate dynamical activity," says Jim Bartels, one of the lead authors of this study. "I realized that exploiting these dynamics for computation could fit well into the field of reservoir computing, which remains a growing area of study."

After this interview, the team explained why this type of reservoir computing could be beneficial for applications in society. "One of the main fields of research that we are working on in the Nano Sensing Unit is time series classification for internet-of-things (IoT) devices and edge computing, such as animal behavior classification [2]. A very important consideration for these devices is their battery lifetime, since it determines the barrier towards concrete adoption. What is exciting about physical reservoirs such as the one we have proposed is the possibility of operating, in future integrated realizations yet to be built, at a lower power than large digital neural networks. As the circuit represents one of the smallest known types of spike-generating oscillators, going beyond the present proof-of-concept stage, we expect researchers worldwide to explore its many possible variations for additional computational frameworks, such as neural networks," commented Dr. hab. Eur-Ing. Ludovico Minati, who is the leading author of the study. The experiments that were undertaken, the design of the hardware, the results and their discussion are reported in a recent article published in the journal Chaos, Solitons & Fractals [3]. Furthermore, all design materials and experimental data have been made freely downloadable.