Recent advances in imaging technology have made it possible to visualize intracellular dynamics, which offers a better understanding of several key biological principles for accelerating therapeutic development. Fluorescent labeling is one such technique that is used to identify intracellular proteins, their dynamics, and dysfunction. Both internal as well as external probes with fluorescent dyes are used for this purpose, although external probes can better visualize intracellular proteins as compared to the internal probes. However, their application is limited by non-specific binding to intracellular components, resulting in a low target specific signaling and higher background noise.

Recently, a fluorescent dye-labeled immunosensor known as Quenchbody (Q-body) has been successfully used to detect antigens in solutions or on the cell surface. A Q-body is essentially an antibody fragment with the ability to bind a specific antigen.

Against this backdrop, researchers from Japan and Singapore led by Prof. Hiroshi Ueda from Tokyo Institute of Technology (Tokyo Tech), Japan recently reported the applicability of Q-bodies for imaging of intracellular proteins in live cells. Their findings are now published in Chemical Science.

"Since the Q-body works as a site-specific and antigen-dependent imaging tool, we hypothesized that it will display antigen-dependent switchable fluorescence on interacting with the target protein, enabling precise visualization of intracellular dynamics. We demonstrated this by synthesizing a Q-body for p53, a tumor suppressor biomarker protein that plays an important role in DNA repair, cell division, and cell death," explains Prof. Ueda.

Flow cytometry revealed higher immunofluorescence with Q-body in cells expressing p53. Furthermore, on sorting, the ratio and fluorescence signal of these cells was significantly higher (see Fig. 1) compared to the others (with or without Q body). 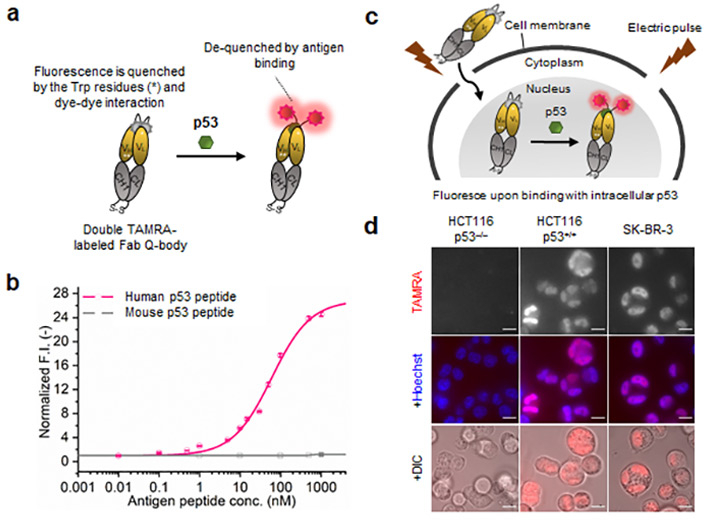 (a) The double labelled fluorescent dye in the antigen fragment-based Q-body is de-quenched on binding with the target antigen, thus displaying fluorescent signaling for visualizing the intracellular target.
(b) p53 peptide concentration-dependent variation in fluorescence signal intensity.
(c) Q-body displays a high fluorescent signal on binding with the target in cells expressing p53, as compared to the 'p53' negative human cells.
(d) Confocal microscopy images of HCT116 p53 and SK-BR-3. Cells which do not express p53, i.e., HCT116 p53(-/-) exhibit no TAMRA-based fluorescence while others (including images stained with Hoechst dye for illuminating nucleus and under bright-field to show the cells) display significant fluorescence.

What are the implications of these findings? Prof. Ueda answers, "The existing techniques are unable to provide precise imaging of less abundant intracellular targets with high specificity and sensitivity. In this context, our study demonstrates the potential of Q-bodies in live cell imaging for better visualization of dynamical intracellular changes, and provides an approach for intracellular antigen-specific sorting of live cells using a Q-body."

Going ahead, we can expect the development of many more Q-bodies for visualizing several other intracellular biomarkers, opening doors to improved cell-based therapeutic development and cancer research.