The Tokyo Tech seal is a registered trademark of the Institute, and is affectionately called the "Swallow at the Window."

The Tokyo Tech seal was designed in 1947 by Mr. Shinji Hori, who was at that time a professor at the Tokyo Fine Arts School. The backdrop represents the Japanese character [工], which is the first character of "engineering" [工業]. This part of the seal also evokes the image in silhouette of a window opening out on the world. Window is the second character of "school" [学窓]. The central figure of the seal depicts a swallow and represents the Japanese character [大], which is the first character of "university" [大学]. In Japan, swallows traditionally portend good fortune. 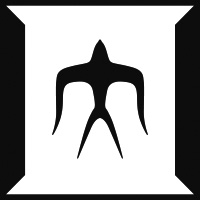 The design was originally adopted for staff badges and has been used throughout Tokyo Tech ever since. In 1981, at the Institute's 100th anniversary, the design was formally adopted as the official seal of Tokyo Tech. On that occasion, then Assistant Professor Ario Tejima of Tokyo University of the Arts, grandson of the late Professor Seiichi Tejima, refined the design.

Usage policy and request for use of the Tokyo Tech seal

The Tokyo Tech seal must be used as prescribed in the visual identity manual.

If you are not a member of the Tokyo Tech community and would like to use the seal, contact pr@jim.titech.ac.jp to submit the following form.

If you are a Tokyo Tech student, faculty, or staff member and would like to use the seal, visit the internal webpage below and abide by the usage policy.