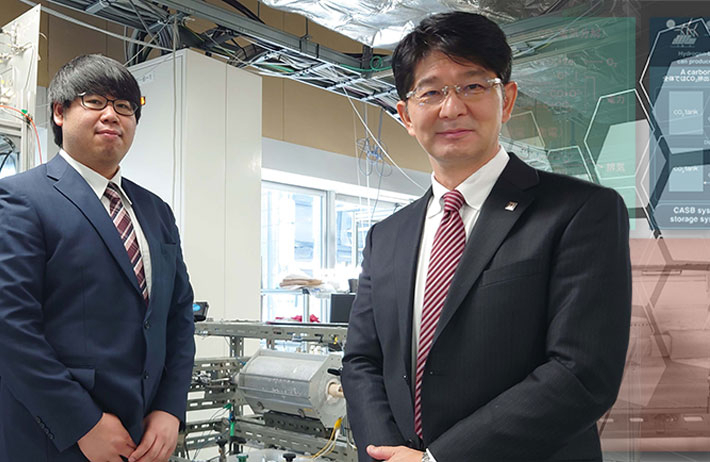 On December 17th, Tokyo Institute of Technology held an online press briefing with Professor Manabu Ihara and 3rd-year doctoral student Keisuke Kameda of the Department of Chemical Science and Engineering, School of Materials and Chemical Technology. The theme of the briefing was the development of the world's first carbon/air secondary battery (CASB) system using CO2. This development is expected to contribute significantly to the adoption of renewable energy by advancing large-capacity power storage technology.

There were 10 reporters from 9 media outlets who participated in the press briefing via video conferencing. After the briefing, there was a Q&A session and a discussion regarding expectations for research results and commercialization.

Renewable energies such as solar power and wind power are greatly affected by weather and the environment. This creates the problem of not being able to provide stable power generation. To address this problem, a large-capacity power storage system for storing generated electricity is indispensable. When the generated power exceeds demand, the surplus power is stored (charged). Conversely, when the generated power falls below demand, the stored power is discharged. This makes it possible to flexibly meet demand for power.

For large-capacity power storage, there are several requirements. First, the system must be as small as possible, but have a large storage capacity. Second, there must be little energy loss when charging or discharging. Furthermore, the time required for charging and discharging must be short. Finally, it must be possible to discharge a large amount of energy.

In a hydrogen storage system, water is electrolyzed using renewable energy and the generated hydrogen is stored. When electricity is needed, the stored hydrogen is oxidized to generate electricity using fuel cells. Since the system performs mutual conversion of hydrogen gas and electric power, it is called H2/H2O-power-to-gas-to-power (H2/H2O-P2G2P).

Ihara describes the system as follows: "Hydrogen can easily execute an electrochemical reaction. Furthermore, it does not emit CO2 during power generation. This makes H2/H2O-P2G2P an extremely useful power storage system. On the other hand, the boiling point of hydrogen is -253°C, which means that it will not liquefy unless it is cryogenic. This makes storage very difficult. Since the introduction of renewable energy and high-capacity storage systems will cause major changes in society, we believed that more options were needed. As one such option, we are introducing the world's first CASB system."

(1) Overview of the CASB system

Figure 1.
Charging/discharging method in the CASB system. From "Carbon/air secondary battery system and demonstration of its charge-discharge" published in Journal of Power Sources, Vol. 516, 2021.

The CASB system consists of a charging and discharging system using a reversible solid oxide electrolyzer cell (SOEC)/solid oxide fuel cell (SOFC). First, when charging, CO2 stored in a liquid state is turned into a gas and put into the system.[1] By supplying the SOEC with electric power generated by renewable energy, the input CO2 is electrolyzed into carbon.

The technical point here is that the SOEC temperature is set to 800°C, after which CO2 is electrolyzed into CO (carbon monoxide) and O2 (oxygen). Next, thermochemical equilibrium (2CO ⇆ C＋CO2) utilizing the Boudouard reaction[2] is used to thermochemically generate carbon in the system. This achievement was the biggest factor in the successful development of our CASB system.

At this time, CO2 is generated by the chemical reaction between oxygen and carbon. However, the generated CO2 is finally stored in a liquid state, so it is not discharged outside the system. Then, when charging, the stored CO2 is once again input into the charging system to operate a cycle of charging and discharging.

"The boiling point of CO2 is about -79°C. However, it also becomes a liquid at 25°C by applying pressure of 6.4 MPa. In the case of hydrogen, at 25°C, even when applying pressure of 20 MPa (which is more than 3 times the pressure applied to CO2), the volumetric energy density is approximately 0.23 that of carbon and CO2. Moreover, hydrogen is a gas under these conditions. In other words, CO2 is easier and cheaper to store than hydrogen. On the other hand, H2/H2O-P2G2P has the advantages of being able to provide the generated hydrogen as fuel to other systems, having a quick reaction at the electrodes, and having less deterioration of the electrodes. Therefore, depending on future technological development, there may be energy systems in which H2/H2O-P2G2P and CASB will coexist." (Ihara)

Additionally, similar to H2/H2O-P2G2P, the CASB system has the characteristics of capacity (storage capacity) for stored carbon and CO2 and the ability to independently set the SOFC output. Consequently, it is expected to perform as a large-capacity power storage system.

Figure 3.
Overview of the CASB system used in the experiment. From "Carbon/air secondary battery system and demonstration of its charge-discharge" published in Journal of Power Sources, Vol. 516, 2021.

They also discussed the performance of the CASB system clarified through the experiment.

(1) Volumetric energy density is the ratio of obtainable energy (Wh) per volume (L). The theoretical volumetric energy density is 379 Wh/L for H2/H2O-P2G2P, but it is 1,625 Wh/L for the CASB system. This is more than four times higher and is a significant advantage. This was the highest value compared to other storage batteries such as lithium-ion batteries.The experiment provided proof-of-concept for the charge/discharge reaction, demonstrating the necessity of the technology in achieving higher performance than other storage batteries.

(2) Mass energy density is the ratio of obtainable energy (Wh) per mass (kg). The theoretical mass energy density is as low as 2,500 Wh/kg for the CASB system, while H2/H2O-P2G2P is 26,000 Wh/kg. This means that carbon and CO2 has a smaller amount of energy when compared with a mass of 1 kg.

"Therefore, H2/H2O-P2G2P can have a lighter weight than the CASB system. This makes H2/H2O-P2G2P suitable for introduction to the global grid and installation in fuel cell vehicles. On the other hand, the CASB system is a stationary power storage system that assumes local production for local consumption on a local grid." (Ihara)

Figure 4.
Relationship between energy density and power density based on volume and weight. From "Carbon/air secondary battery system and demonstration of its charge-discharge" published in Journal of Power Sources, Vol. 516, 2021.

(4) Charge/discharge efficiency (power generation efficiency) is the ratio of the power that can be obtained by discharging to the power (Wh) required for charging. The theoretical charge/discharge efficiency is 76% for H2/H2O-P2G2P, compared to 100% for the CASB system. This means that the CASB system also has a significant advantage in this respect. In the case of hydrogen, when H2 reacts with O2 to make H2O, 24% is always theoretically released as heat, so it will never reach 100%.

Figure 5. Performance of the CASB system.

In the future, Ihara and his team will work on reducing potential loss, called overvoltage, as well as develop electrode materials that are more durable and resistant to degradation. Other issues to be addressed include development of a CO2 tank system as well as heat management. Despite the many challenges, however, Ihara and colleagues aim to bring the technology to practical use within 5 to 10 years.

[1] In the power generation experiment conducted at the time, a tank was not installed. CO2 was instead stored in the space inside the experiment equipment.

[2] Boudouard reaction : A redox reaction of chemical equilibrium mixture for carbon monoxide (CO) and carbon dioxide (CO2) at a specific temperature. At a specific temperature, there is a chemical reaction among solid-state carbon (C), CO, and CO2 that is expressed by 2CO ⇆ C＋CO2. By utilizing this thermochemical equilibrium (a state in which substances are balanced and stable), carbon can be precipitated.