Ookayama Campus, located in the heart of Tokyo, is home to most of the Institute's undergraduate students. It is within easy access of all major transportation hubs in and around the metropolis.

The Main Building maintains its value as an example of modern architecture from the early Showa period. It has witnessed much of the history of Tokyo Tech and has become a symbol of Ookayama Campus. (Not open to the public)

The Ookayama library is a must-see sight for its architectural beauty and value. The Library makes its collection available to outside researchers under certain conditions.

Wood Decking in front of the Main Building

This wood decking is lined with cherry trees, where you can sit and enjoy the changing seasons, including magnificent cherry blossom in spring.

The overpass in front of the Healthcare Center was designated as one of 100 spots in Kanto prefecture where you can appreciate beautiful views of Mount Fuji.

The science, typical research in the field of technology, and commemorative educational items related to the history of Tokyo Tech are displayed in this building.
Open weekdays, 10:30-16:30

The Environmental Energy Innovation (EEI) Building incorporates the latest energy technology making the building like no other in the world. Designed to confront global warming, the EEI Building is nearly self-sufficient at producing the electricity it consumes and has reduced its carbon dioxide emissions by more than 60%.

In July 2013, three buildings on the Tokyo Tech Ookayama Campus were granted the status of Registered Tangible Cultural Properties by Japan's Agency for Cultural Affairs.

Collaboration Center for Design and Manufacturing

The Collaboration Center for Design and Manufacturing is where student clubs make and exhibit homemade speakers, race-winning human-powered aircraft and other creations, including those made in creativity education classes
Open weekdays, 10:00 - 16:00

Collaboration Center for Design and Manufacturing

The statue of Professor Seiichi Tejima (1849-1918), the second principal of the Institute's predecessor, Tokyo Vocational School, was funded with donations from graduates and unveiled in May 1921 at Tokyo Tech's first campus in Taito City.

This monument depicts swallows, the symbol of Tokyo Tech, and dolphins, the artist Ryohei Miyata's main motif, flying in unison towards the future. Complete in 2009, it celebrates the harmony between science and technology and art and culture.

Suzukakedai Campus is located on the border of Tokyo and Yokohama. It houses many of the Institute's Research Centers, Laboratories, and Units.

An exhibition of the Coelacanth, known as a "living fossil", also sits in the Frontier Research Center. You are able to view resin-coated samples, replicas, eggs and other items not normally found in exhibitions of this type.
Open weekdays, 12:00-17:00 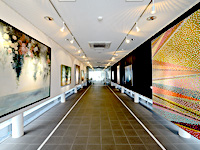 The Peripatos Open Gallery has two exhibition areas: an indoor display area for paintings and an outdoor area for sculptures. The latter area with its three-dimensional works of art was intentionally designed to catch the attention of students, staff and visitors as they stroll through the Suzukakedai Campus grounds encouraging both relaxation and inducing them to return to see future exhibitions.

This building has a high resistance to earthquake activity. Inside the building you can see a wide range of technologies and mechanisms to strengthen high-rise buildings against earthquakes.

Honorary Professor Yoshinori Ohsumi was awarded the Nobel Prize in Physiology or Medicine in 2016 for his discoveries of mechanisms for autophagy. A plaque commemorating his achievements is located just inside the main gate of the campus.

In 1933, Professor Issac Koga (Issaku Koga) invented a temperature-insensitive quartz oscillation plate that revolutionized wired and wireless communications and resulted in an IEEE milestone in 2017. Plaques on Suzukakedai and Ookayama Campuses commemorate his achievements.

Tokyo Tech's Tamachi Campus is located in Minato City in the center of Tokyo, in the immediate vicinity of Tamachi Station. It is home to the Tokyo Tech High School of Science and Technology, the Graduate School of Innovation Management, the Career Advancement Professional School, and the Tokyo Tech Campus Innovation Center, which is also home to satellite offices of other national universities.