In 1987 when construction of Centennial Hall was completed, neighborhood residents were amazed at the distinct final form that emerged from behind the wooden house of Ookayama Station. Children called it Gundam, the name of a humanoid weapon from a famous televised anime series. Years have passed since the unveiling of Centennial Hall. Ookayama Station is now underground and another new building, the Tokyo Tech Front, stands across the street from both. Entering campus through the Main Gate, visitors are now greeted by another new and visually striking building. The triangular, glass-paned library building is affectionately known as the "cheesecake." The landscapes of both Ookayama and Tokyo Tech's Ookayama Campus have experienced radical change over time and yet the two have become comfortably intertwined. Today, Centennial Hall is not only a symbol of Tokyo Tech, but also of Ookayama. 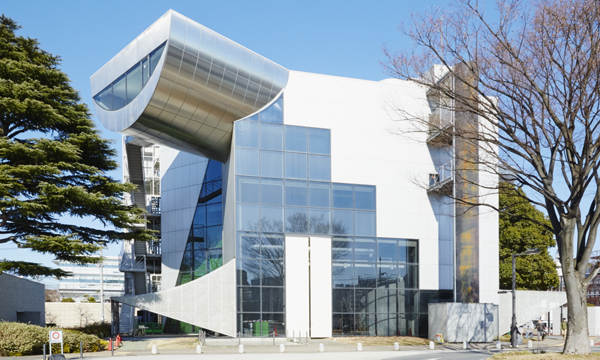 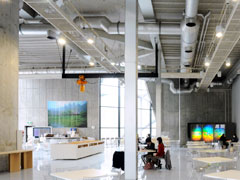 At first glance, Centennial Hall might look cold. However, a closer look reveals an organic exterior with movement in various directions: a curved half cylinder passes through the building on the upper floors, asymmetrical eaves frame the east and west entrances, and a black tube, which doubles as a dumbwaiter, rises a discreet distance away from the building.

The visitor to Centennial Hall crosses the threshold into a bright and spacious Information & Learning Commons, also known as T-POT, which doubles as an event venue and a place to study or relax. A hologram created by a Tokyo Tech graduate can be seen against a back wall. An intricate plaster model of the Main Building on campus is displayed next to racks of informational pamphlets. The open ceiling exposes a grid of silver air-conditioning ducts, catwalks, and a special crane for installing exhibits. Centennial Hall's open 1st floor is an inviting space for both the Tokyo Tech and local communities. 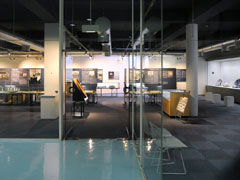 Six rooms on the B1 and 2nd floors of Centennial Hall have been allocated to the Museum and Archives for permanent exhibitions, where highlights of Tokyo Tech's education and research are displayed. There are many works of art on the B1 floor, including ceramics and glassware. Some visitors are surprised to encounter ceramics in a renowned science and engineering university museum. However, upon seeing and reading about Gottfried Wagener featured in the exhibit, the visitor quickly comes to appreciate the long history of the Institute, which promoted the advancement of technology and the training of technical leaders, the roots of which lie in ceramic engineering and textile-dyeing. Both of these industries require scientific knowledge, technical ingenuity, and innovation. The works of art of three living national treasures and Tokyo Tech graduates, Shoji Hamada, Keisuke Serizawa, and Tatsuzo Shimaoka, along with those of other renowned Japanese potters and Tokyo Tech graduates, such as Kanjiro Kawai, are on display.

The following works of art represent a selection of researchers, artists, and items on display in Special Exhibition Rooms A and B on the B1 floor: 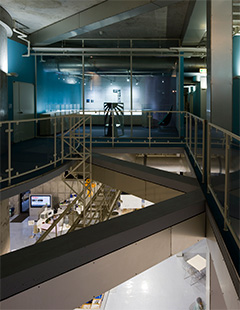 There are four exhibition rooms on the 2nd floor fronting the open ceiling. These rooms were transformed from meeting rooms into exhibition spaces in 2010 and won the Good Design Award in the same year. Each room is named for its exhibits. 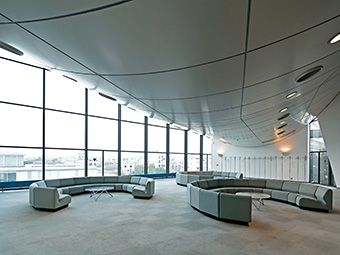 The bottom of the hallmark half cylinder passes through the building forming the ceiling of the 3rd floor, which is comprised of meeting rooms and a lobby. The meeting rooms are used for conferences and receptions. From the lobby, a breathtaking view can be seen of Tokyo and the Ookayama Station commercial district.

Inside the half cylinder on the 4th floor is located DLab, which aims to create a brighter, more prosperous world through discussions on future society among Tokyo Tech faculty, staff, students, alumni, and members of the public.

*
Currently non-campus members are not allowed to use the 4th floor. 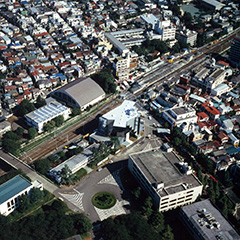 The construction of Centennial Hall was planned in 1981 as part of a series of projects to celebrate Tokyo Tech's 100th anniversary. The building opened on November 1, 1987. The original planning for the 100th anniversary celebration started 13 years earlier in 1974. Once the location and designer of the building, then-professor Kazuo Shinohara, were decided, a fundraising committee led by Mr. Toshio Doko, the then-president of the Tokyo Tech Alumni Association, was established to collect donations from graduates and the corporate community.

The prospectus for fundraising at that time stated that the objective of Centennial Hall was to become "a monument to Tokyo Tech's future development by preserving and showcasing scientific and technological achievements made at the Institute throughout its history." In accordance with this objective, the Centennial Hall project committee developed two concepts, human heritage and material heritage, which were to permeate Centennial Hall's activities. Today, Tokyo Tech's heritage can be witnessed in both the structure itself and in its engagement with the community.

Since its creation, Centennial Hall has been actively expanding its functions and activities. In addition to the permanent exhibitions in the basement and 2nd floor, special exhibitions with topical themes are held several times a year in the Information & Learning Commons on the 1st floor. The Museum and Archives promotes exhibits, lectures, and various events, all revolving around Tokyo Tech's technical innovation. 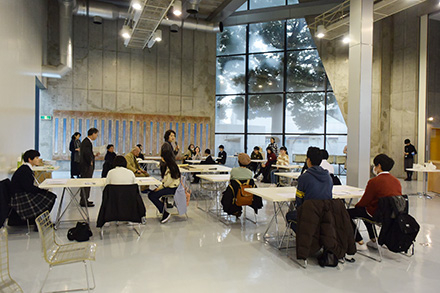 Together with the Museum and Archives, the building functions as a cultural and information hub open to the community. In addition to hosting conferences, seminars, and symposia, it provides space for academic exchange between students, faculty, staff, researchers, and the public.