In July 2013, three buildings on the Tokyo Tech Ookayama Campus were granted the status of Registered Tangible Cultural Properties by Japan's Agency for Cultural Affairs.

The West Building 1 (Chemical Analysis Laboratory) completed in 1931 and the Main Building completed in 1934, two of the buildings granted Registered Tangible Cultural Properties status, have witnessed much of the history of Tokyo Tech. The campus was originally located at Kuramae in Taito City near the Sumida River, but after the Great Kanto Earthquake struck in 1923, it was destroyed by fire. The campus moved to the current site in Ookayama in 1924. The school obtained the status of a degree-conferring university in 1929, and was later renamed Tokyo Institute of Technology. The 70th Anniversary Auditorium, the third building to receive the Registered Tangible Cultural Properties status, was completed in the late 1950s, in the immediate postwar years. Almost all of the construction expenses for the Auditorium were covered by donations from graduates.

The most advanced techniques available at the time were utilized in the construction of the three buildings. The materials, structures and designs are valuable as examples of postwar and modern architecture of the early to middle Showa period. The Campus Reconstruction Department, comprised of faculty members from the then Department of Architecture and Building Engineering including Yoshiro Taniguchi and administrative staff, took the lead in the design and construction of these buildings. Tokyo Tech applied for the registration of these buildings as cultural properties in order to pass the three buildings down to later generations as symbols of the technical ingenuity the Institute has been embracing for the duration of its existence. 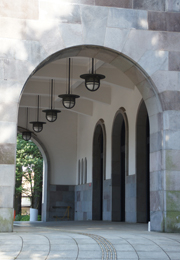 The clock tower is more than a feature of the Main Building. It has become a landmark for the Ookayama Campus. The 127.4 m façade is simple in ornament. However, the balance between the central part of the building, the clock tower and that of both ends is so exquisite that the resulting effect of the façade is majestic. The main entrance's portico with five arches also contributes to the stately look of the building. The Main Building is located on a sloped site, which necessitated the construction of a loggia, nine-arches long, on the west side. 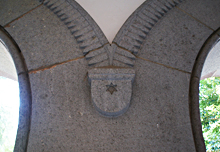 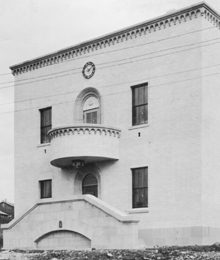 The West Building 1 was completed in September 1931 and housed the Chemical Analysis Laboratory. Prior to this there were only temporary buildings on the Ookayama Campus, making it Tokyo Tech's first permanent building. The building was designed as an experimental facility where noxious fumes could be produced as the laboratories were equipped with a special ventilation system.

The West Building 1 is now home to the International Student Center. The white tiles on the exterior walls are similar to those of the Main Building, but their alignment is different. The terra cotta Lombard band on the upper part of the building and the portico built with bush-hammered stones are common features of both buildings. The west side of the West Building 1 was elaborately designed with exterior staircases and a circular balcony.

The 70th Anniversary Auditorium was designed by the renowned architect Professor Yoshiro Taniguchi and is one of his best known masterpieces. The building is located in front of the Ookayama Library on the slope. The beautiful green lawn, on which the building is located, slopes down to the south. The Auditorium was designed to make the most of this landform. The auditorium seats are set at a slant along the slope, which allows the building to be low in height. From the Main Gate, the Auditorium looks as though it were a one-story building. 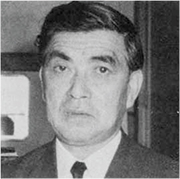 The late Professor Emeritus Yoshiro Taniguchi was born into a Kutani-style pottery family in Kanazawa. He graduated from the predecessor of the current Department of Architecture at the University of Tokyo and taught at Tokyo Tech from 1930 to 1965. His early style exhibits an affinity to western architecture, which was evident in the now-defunct Tokyo Tech Hydrodynamics Laboratory Building. In 1938 Taniguchi traveled to Berlin and was influenced by Karl Friedrich Schinkel's neoclassical buildings. Upon his return to Japan he became interested in Japanese traditional architecture. His best known masterpieces include the Crown Prince's Palace (1960) and the Tokyo National Museum's Toyokan (1968). In 1973 Taniguchi won the Order of Culture. Yoshio Taniguchi, best known for the redesign of the Museum of Modern Art in New York, is Yoshiro Taniguchi's son.