The potential of DNA structural properties in single-molecule electronics has finally been harnessed by researchers from Tokyo Institute of Technology (Tokyo Tech) in a single-molecule junction device that shows spontaneous self-restoring ability. Additionally, the device, based on a "zipper" DNA configuration, shows unconventionally high electrical conductivity, opening doors to the development of novel nanoelectronic devices. 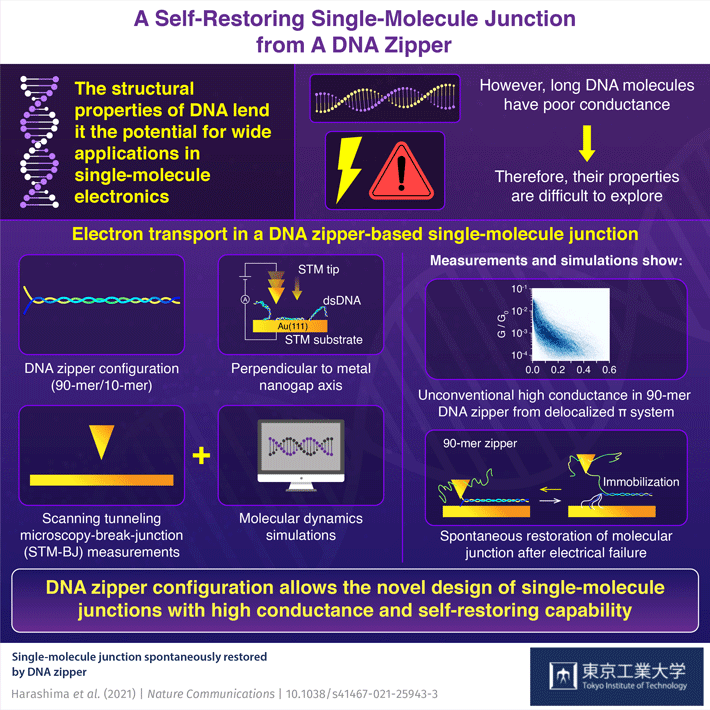 In every advanced organism, the molecule called DNA (deoxyribonucleic acid, to use its full name) forms the genetic code. Modern-day technology takes DNA one step beyond living matter; scientists have established that the intricate structures of DNA have made it possible for it to be used in new-age electronic devices with junctions comprising just a single DNA molecule. However, as with any ambitious endeavor, there are impediments to overcome. It turns out that the single-molecule conductance falls off sharply with the length of the molecule so that only extremely short stretches of DNA are useful for electrical measurements. Is there a way around this problem?

There is, indeed, suggest researchers from Japan in a new breakthrough study. They have managed to achieve an unconventionally high conductivity with a long DNA molecule-based junction in a "zipper" configuration that also shows a remarkable self-restoring ability under electrical failure. These results have been published as a research article in Nature Communications.

How did the researchers achieve this feat? Dr. Tomoaki Nishino from Tokyo Tech, Japan, who was part of this study, explains, "We investigated electron transport through the single-molecule junction of a 'zipper' DNA that is oriented perpendicular to the axis of a nanogap between two metals. This single-molecule junction differs from a conventional one not only in the DNA configuration but also in orientation relative to the nanogap axis."

The team used a 10-mer and a 90-mer DNA strand (which indicate the number of nucleotides, basic building blocks of DNA, comprising the molecule length) to form a zipper-like structure and attached them to either a gold surface or to the metal tip of a scanning tunneling microscope, an instrument used to image surfaces at the atomic level. The separation between the tip and the surface constituted the "nanogap" that was modified with the zipper DNA.

By measuring a quantity called "tunneling current" across this nanogap, the team estimated the conductivity of the DNA junctions against a bare nanogap without DNA. Additionally, they carried out molecular dynamics simulations to make sense of their results in light of the underlying "unzipping" dynamics of the junctions.

In the wake of these discoveries, the team is excited about their future ramifications in technology. An optimistic Dr. Nishino speculates, "The strategy presented in our study could provide a basis for innovations in nanoscale electronics with superior designs of single-molecule electronics that could likely revolutionize nanobiotechnology, medicine, and related fields."

Indeed, these are exciting times in the field of molecular electronics!