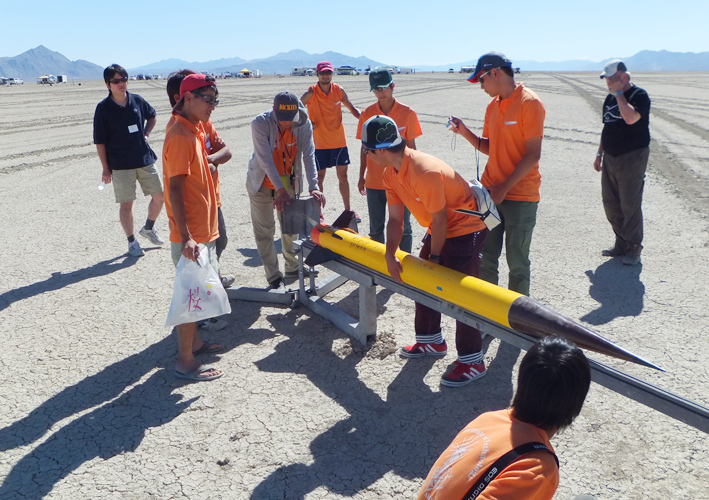 Students enrolled in the Mechano-Aerospace Project A Course won at the man-made microsatellite prototype world championships.

"A new CanSat competition is going to be held." As soon as Kenta Kawaguchi of the Department of Mechano-Aerospace Engineering in the School of Engineering at Tokyo Institute of Technology (Tokyo Tech) got wind of this he began encouraging his juniors to participate.

A CanSat is a man-made satellite prototype the size of a can of soda. The purpose of the Mechano-Aerospace Project A, a course taken by 3rd-year students in the Department of Mechano-Aerospace Engineering, is to design, build, launch, and recover a CanSat.

The ARLISS Project, a collaborative project between Stanford University, "high power rocketry enthusiasts," and other institutions of learning, holds a CanSat competition, the international Mission Competition, for students in the Black Rock Desert of Nevada. ARLISS is the acronym for "A Rocket Launch for International Student Satellites." The competition has been held annually since 1999 as a forum for demonstrating technologies used to develop man-made satellites. Teams of students from around the world come together to launch and deploy their satellites from rockets in the desert in order to execute their missions.

Specifically, in the Mission Competition, teams compete by loading their respective CanSats into a rocket, launching and deploying their payloads from the rocket 4000 m above ground, and having them execute a mission modeled after an actual satellite operation during and after descent. Tokyo Tech students have participated in the ARLISS Mission Competition a number of times to date.

The AXELSPACE CUP is a new competition launched in 2013. It is a separate competition from ARLISS and involves professional satellite designers from the Axelspace Corporation, the Japan Aerospace Exploration Agency (JAXA) and university faculty judging teams on their ability to demonstrate the technologies required for the mission they undertook in ARLISS. Accordingly, focus is placed not only on the technologies needed to build the satellite, but also on the scientific background of the mission.

To participate in the ARLISS international Mission Competition, a team first needs to make it through the national round. Kawaguchi approached rising 3rd-year students in January before the April new academic year start. He and his team started preparing in January, three months prior to the start of the Mechano-Aerospace Project A course, for the national round, which would take place in early August.

Tokyo Tech's team designed a mission to investigate a natural satellite of Saturn known as Titan. Their plan involved deploying 150 microsatellites into the atmosphere surrounding Titan which would gather atmospheric data during their descent, and use parabolic antennas to scan clouds in the sky after landing. 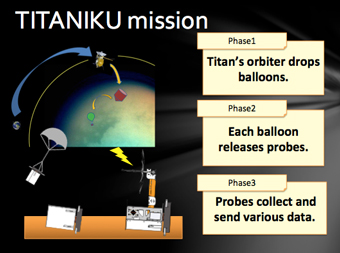 The team strove to develop the sequence of processes necessary for building a satellite capable of executing this mission, to launch it from the ground, and have it descend and make observations. They named themselves TITANIKU.

TITANIKU had eleven students, most of whom were 3rd-year students. Fourth-year students participated as mentors. Designing the mission required diverse knowledge about the strength of structural components, electronic circuits, mechatronics, vibration resistance during launch and deployment, and impact resistance. The team regularly reported how the project was progressing to their instructors and sought their advice. TITANIKU received both harsh criticism and encouragement on numerous occasions. Based on the feedback the team received from faculty members and mentors, they ended up making 20 main frames, not to mention all the other components, during the arduous process of building and breaking test models. 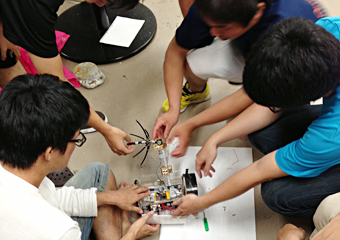 TITANIKU working on the CanSat

At the national round in August, CanSats were loaded into a hot air balloon and dropped from a height of 50 m. Dropping a CanSat allowed the judges to verify whether or not the parachute opened properly, if it could make observations during its descent, if it worked on the ground after landing, and if it could determine its location based on GPS technology and communicate wirelessly. During this round, everything went according to plan and it was determined that the team's CanSat could operate adequately at ARLISS. TITANIKU was one of the teams chosen to represent Japan at the world championships.

The ARLISS world championships in 2013 were held in the Black Rock Desert in Nevada, USA on September 8-13. The championships were divided into two competitions, the Mission Competition and the Comeback Competition, which together attracted 22 teams with approximately 150 people from 7 countries.

For the Mission Competition, participants were free to design their own missions, and they competed on the basis of creativity, scientific significance and mission accomplishment.

The CanSat is loaded into a 3-meter-long rocket and launched to a height of 4000 m.

A parachute opens after deployment from the rocket and the CanSat descends. The CanSat sensors collect measurements about air pressure, temperature and other atmospheric data as well as determine its location through GPS technology, and transmit this by radio to earth during descent.

The CanSat's landing is evaluated by acceleration and gyro sensors inside of it. After landing, it maintains a horizontal position while an operating antenna opens. It maintains position control so that its antenna can detect and pick up radio waves sent from an arbitrary location on the ground.

Teams are given two opportunities to launch and they must complete their envisaged mission during these launches.

After the first launch, parachute strings got tangled in the main structure during the descent causing the satellite to malfunction. This flight was a failure.
TITANIKU's second launch took place two days later. The team worked all night making adjustments, corrections and design changes.

The second launch was a great success. The TITANIKU CanSat executed its scheduled mission to perfection. 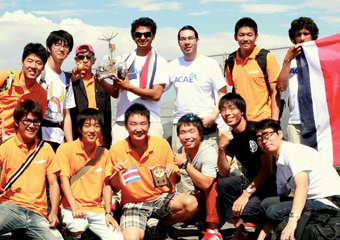 A commemorative team photo with the team from Costa Rica

After the results were announced on the final day, all participants voted to decide the winners. TITANIKU was praised for the level of perfection the team achieved, mission concept, and the creativity and innovativeness they demonstrated in incorporating a movable parabolic antenna into the CanSat. TITANIKU placed first among the 11 teams participating in the Mission Competition. 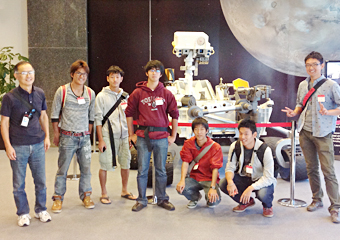 The final round of the AXELSPACE CUP was held one month later and TITANIKU won this as well. This win was very meaningful in that this competition involves more than simply making a satellite prototype; it demands the accuracy intrinsic to designing, launching and operating a CanSat capable of executing an actual interplanetary probe mission. 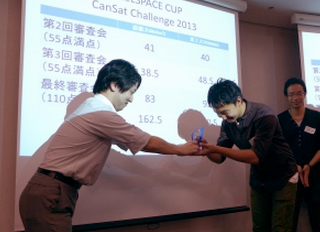 The final round of the AXELSPACE CUP was held one month later and TITANIKU won this as well. This win was very meaningful in that this competition involves more than simply making a satellite prototype; it demands the accuracy intrinsic to designing, launching and operating a CanSat capable of executing an actual interplanetary probe mission.

Having accomplished so much, TITANIKU is currently preparing a presentation and an information package to give to the next generation of participants. The team will hold a number of explanatory meetings from late December through early January. Exactly one year has passed since the team started working on this project. TITANIKU looks forward to seeing what kind of ideas and technologies their successors will come up with.

Making this CanSat enabled me to experience the entire project process from mission conception based on an actual exploration mission, through design, construction, operation tests and launch. Next I would like to work on a real, small satellite project.

You can do make things on your own, but this experience of working with others on a project was really meaningful for me. I experienced both the joys and difficulties of working on something as a team.

Involvement in this project enabled me to meet people not only at Tokyo Tech but also people involved in aerospace worldwide. 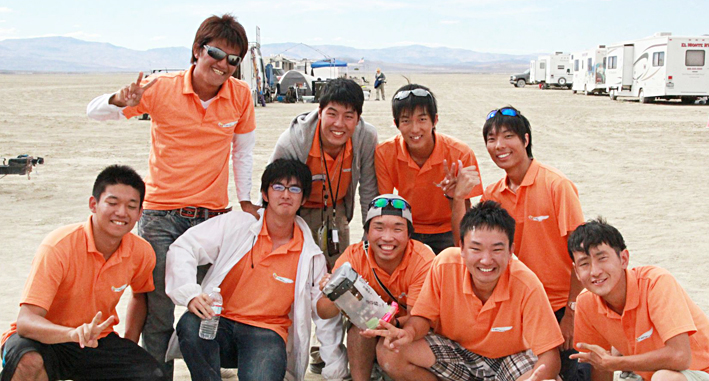