For a current list, see the following:Circle and Club activities 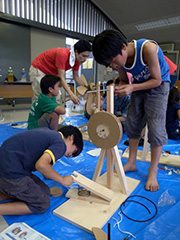 Tokyo Institute of Technology's International Development Academy (IDA) has increased the number of projects it supports from one to eight in the past year. IDA's goal is to support sustainable living, both in Japan and overseas, through its projects. The Academy (formerly Association) has also increased its membership to more than 20, and now includes a number of Japanese members. Until last year it had been a group of mostly international students.

"We're still actively recruiting international students, but with half the members now Japanese, it gives us more opportunities to take on new projects," says Junichirou Ishio, president of IDA and a second-year MA student studying applied economics and statistics. 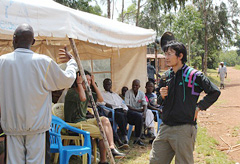 One recently completed project involved teaching local primary school children to build a non-electric fan. The idea arose after the March 11, 2011 earthquake and tsunami that left many Japanese homes without electricity. To get support for the project, IDA applied to the Tokyo Metropolitan Board of Education for funding and was granted 170,000 yen to carry out the project.

"We didn't think we'd need to use the full amount," says Ishio, "but it took a lot of trial and error and experimenting with different materials to develop pedal-powered fans. They also had to be simple enough for the children to be able to make. When all was said and done, we ended up spending more!"

IDA's vice president, Alvin Varquez, a first-year PhD student from the Philippines studying international development engineering, describes other projects under way. In Kenya, IDA is helping a local community develop a more robust charcoal fuel brick. The binding material currently used causes the brick to crumble easily, so the search is on to find a more suitable material from plants grown in the local area. Another project involves helping a Vietnamese village produce rice wine. "Rice is plentiful in the area," says Varquez. "If the farmers can develop a new market for their produce, it would create a new industry."

Ishio praises the benefits of joining IDA. "I've learned so much about how to turn an idea into reality, how to get funding, and how to manage a team." Varquez agrees. "Researchers can spend too much time in the lab. IDA is a way to make your ideas real by directly helping society."

At the Vietnam project

- Update since the interview -
In the Kenya Charcoal Project, a production company will be established this summer in Kenya. IDA also received some funds for this project at a social venture competition in Japan.
(http://idacharcoal.blogspot.jp/

)
In Vietnam, a project to produce "Non La" (a Vietnamese conical hat) with increased value is proceeding to improve local farmers' income.
(http://namdinhproject.blog.fc2.com/

Meister is a club where members build human-powered aircraft and electric racing vehicles called Econo-moves. Experience the thrill, together with other club members, of seeing your vehicle in flight or in motion!

Engage with the World 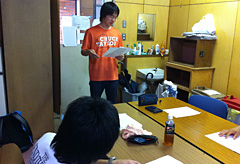 Members break into teams for practice

Always striving to place high in the rankings at international debate competitions, ESS members refine their debating skills on a routine basis. Topics range from everyday affairs to complex international issues, so debaters of any level can join. One of the benefits of participating in international competitions is meeting people from various countries. 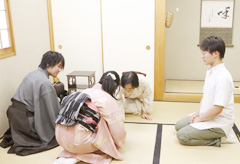 Practicing in a tea-ceremony room

This club practices with a sense of urgency and performs or demonstrates the tea ceremony at various festivals, including one at Tokyo Tech. More than forty universities participate in an intercollegiate tea ceremony, which provides members with the opportunity to interact with other tea practitioners.

Booth at the Design Festa

Do you have a passion for designing and creating things, like furniture, light fixtures, accessories or graphics? Join the Design Society and collaborate with others or work independently. Either way, drop by and see the diverse range of projects and designs! 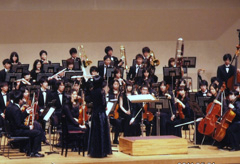 The Tokyo Tech Orchestra performs at regular concerts three times a year and gives mini-concerts at Tokyo Tech festivals. More than 100 members with varied backgrounds rehearse twice weekly. Everyone speaks the same language when it comes to making music! 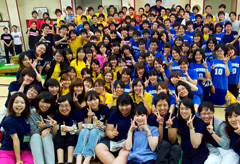 Outstanding Mixed Chorus for Universities in the Kanto Region

Chor Kleines is a large choir consisting of more than 150 students from multiple universities. It has taken the gold in the Japan Choral Association's National Choral Competition for the past 15 years*! Beginners, who make up more than half of the choristers at the start of each academic year, progress rapidly with one-on-one instruction. Make friends from various universities and enjoy! 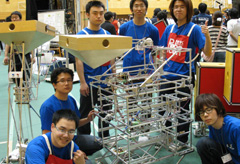 The Place to Innovate and Create

The Society for the Study of Robotics is a place where you can think outside the box! Apply what you know, learn from other members of the club what you don't. Your imagination is the limit. Anything is possible from the practical arranging of circuits on a circuit board to the creation of mathematically-based designs.

The Power of Print

This club issues the Kogyo Daigaku Shimbun, the only newspaper at Tokyo Tech. Planning, collecting materials, interviewing and writing all provide invaluable experiences to members. Contrary to what people may think, many students and researchers at sci-tech universities enjoy reading and writing. For those seeking a less scientific, more social organization, this is the place.