Field Excursion to the Hawaiian Islands

The places visited until now have primarily focused on the United States and have included the Grand Canyon, Yosemite Valley, Death Valley, Barringer Crate in Arizona, and Kīlauea, which are geologically diverse and extremely interesting locations. There have been thirteen excursions to the American mainland, seven to the Hawaiian Islands and one to New Zealand.

In the Department of Earth and Planetary Sciences, student education is carried out with the aim of developing a new generation of earth and planetary scientists and engineers with a global outlook. The department offers Field Excursion classes as one part of that education. On Field Excursions the students visit overseas geological sites that allow direct contact with nature, which is important.

The Japanese archipelago is located on the edge of the Asian continent and is a place where many distinctive earth-science phenomena can be observed, as typified by earthquakes and volcanic activity. However, there are many natural phenomena and important earth-science phenomena that exist in the world that cannot be directly observed in Japan. Accordingly, venturing overseas and observing these phenomena on-site is necessary in order to train human resources with a global outlook. Field Excursions provide an opportunity for students to interact directly with international researchers and students in other countries which will benefit them in their future careers.

In 2014, the Field Excursion took place in Hawaii from February 19-27. Students stayed on the Hawaiian Islands of Oahu and Hawaii, and had extensive learning experiences including specialist lectures at the University of Hawaii at Manoa and the Hawaii Volcano Observatory, a tour of the red-hot lava plateau from the summit of Kīlauea to the coast, and a field trip to the Subaru Telescope facility at the summit of Mauna Kea.

Field Excursions are not simply trips overseas. Before setting out, lectures on the excursion destinations are held and preparation includes cultivating a high level of independence and creativity. Groups of students read and study scientific articles in English on the geographical phenomena at their destination and also give presentations on what they learned.

The student groups also make guidebooks for the trips by hand before going abroad. Some of them are more than a hundred A4-size pages long. They contain summaries in Japanese of the content of the specialist scientific articles they read and their research findings based on a variety of reference materials and what they learned from faculty members. Then on location, at every stage of the excursion, each group adds comments and explanations to their guidebooks after hearing on-site lectures and visiting the sites. At the end of the Field Excursion class students submit individual reports. 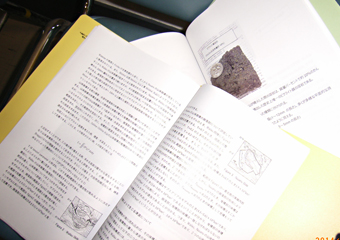 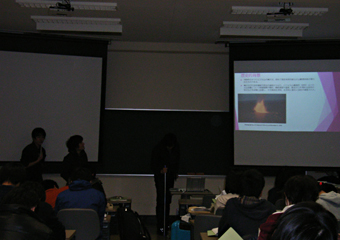 A pre-tour presentation by students

The first destination was the University of Hawaii at Manoa on the island of Oahu for a lecture by Professor Mike Garcia on the overall origins of the Hawaiian Islands. The students were both nervous and bold as they tackled the challenge of asking questions in English. 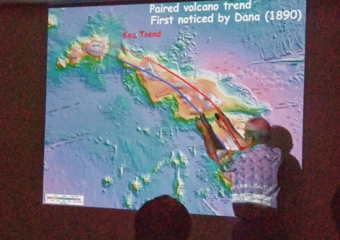 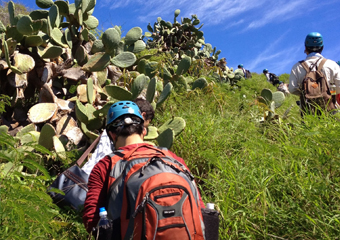 The Oahu part of the Field Excursion took place the day after learning in detail about how the Hawaiian Island chain was formed. Students observed the terrain at places like Nuʻuanu Pali and Makapu'u Head. Nuʻuanu Pali has vertical cliffs 1500 m high, and the students saw how the volcano's mountainous form is a result of accumulated layers of thin lava. At Makapu'u Head, students collected rocks containing small yellow-green minerals called picrites. These and similar minerals are found in abundance here as Oahu is a lava island with magma rising directly from the Earth's interior. 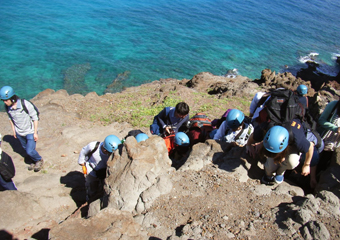 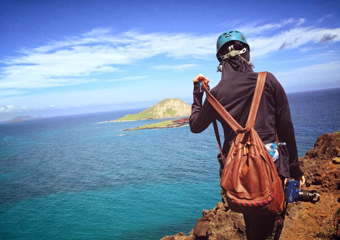 Whales were seen from Makapu'u Head

Heading for Kīlauea, one of the most famous volcanoes above ground, the party left Oahu Island for Hawaii Island. First they visited the Hawaii Volcano Observatory, where they attended a lecture on Kīlauea by the internationally renowned volcanologist, Dr. Don Swanson, before actually traversing the Kīlauea Iki crater by foot.

To the east of Kīlauea Iki there is a lava shield cone that formed the summit of Kīlauea around 500 years ago. Today a lava tube remains. The party observed it from the inside as they walked through it. 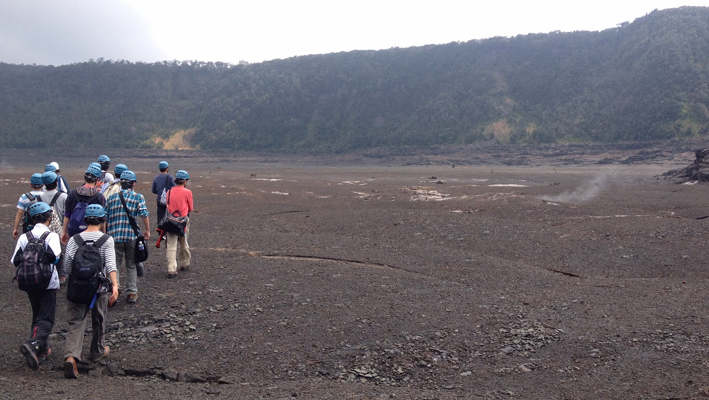 Kīlauea Iki lava lake where steam can be seen rising 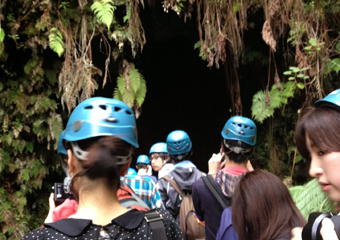 Entrance to the lava tube 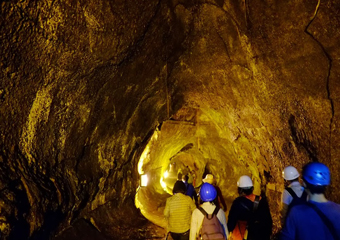 Kīlauea is an active volcano. Lava flows into the ocean. Depending on the year, you can sometimes get close enough to the flowing lava to touch it. However, this year the red-hot lava was flowing quite a distance from the path, and the party was not able to approach it. Instead they took a field trip to see Hilina Fault and the comparatively new lava around the Chain of Craters Road. The dark-colored lava with a ropey surface called “Pahoehoe” made for some dynamic scenery. 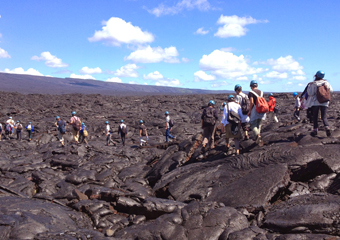 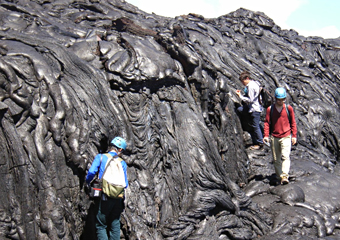 Fifth day of the Field Excursion: observing the lava at the end of the Chain of Craters Road

With the cooperation of the National Astronomical Observatory of Japan, the group visited the Subaru Telescope at the summit of Mauna Kea and the Subaru Base Facility at its foot. After attending a lecture on the Subaru Telescope and space, the group headed for the Subaru Telescope, which is situated at a height of 4200 m. Even in tropical Hawaii, the temperature was close to 0 degrees Celsius, with atmospheric pressure at roughly 60 percent that of sea level, making it a harsh environment. The highlight was seeing the lineup of large telescopes from various countries. 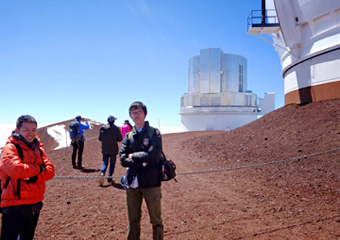 Dome of the Subaru Telescope 4200 m above sea level 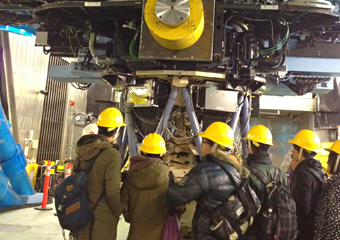 Listening to an explanation at the base of the Subaru Telescope

“Unfortunately we were not able to see flowing lava itself on the Field Excursion this time. Nonetheless, I believe I was able to gain a deeper understanding of volcanoes by hearing explanations from specialist scholars, observing land formations created by actual volcanoes, and discussing with fellow participants. I also think that one of the wonderful points of the Field Excursion was being able to visit the Subaru Telescope, which would not be such an easy thing to do if you went as an individual. In addition, we had to take care of our own meals during the Field Excursion, so we were able to get a feeling for the local lifestyle and culture, which made it a valuable experience.”

“Faculty members explained geological features at the actual locations where they were located, and also told us about things that scientists still do not know. This made it easy for students to actively engage with the material as opposed to just reading about it in books. For example, when asked why these sheer cliffs came into existence, we thought about it right there on the spot. Through these processes, I could really grasp what volcanoes are. This was the most important thing about the Field Excursion. There was also enough free time for us to enjoy Hawaii's atmosphere.” 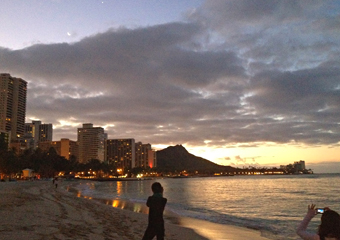 The Field Excursion provided a good opportunity to experience another culture, especially for students who went abroad for the first time. It is hoped that this overseas experience will motivate students to participate in international workshops in the future.

The next Field Excursion in the Department of Earth and Planetary Sciences is slated to visit interesting places in the western U.S., such as the Grand Canyon and the Lowell Observatory.