Throughout its history, Tokyo Tech has maintained the importance of providing a solid liberals arts education alongside the science and engineering expertise it is most well known for. Building on this tradition, the newly founded Institute for Liberal Arts (ILA) kicked off its new liberal arts curriculum in April 2016, which applies to all Tokyo Techies, from new bachelor level students to those in doctoral programs. The first step in this system — a gateway to the liberal arts — is the Tokyo Tech Visionary Project.

A required course for all new students 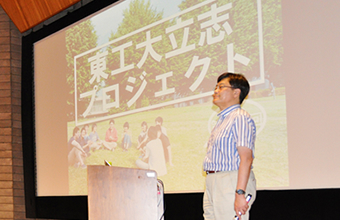 Running from April to early June in the first quarter of each academic year, the Tokyo Tech Visionary Project is a compulsory course taken by all entrants soon after admission. Its rudiments differ distinctly from the landscape of conventional Tokyo Tech lectures, where professors pass down their expertise to students. The Visionary Project is about exploring a world where there are no correct answers. It aims to strengthen humanity, sociability, and creativity, pillars that will help each student maximize his or her potential in society. Through self-discovery, students are encouraged to set individual goals which help them create a vision of their own unique path for the next four years of university life.

What kind of work will I do in the future? How will my career develop? These are issues that most young adults are considering. The Visionary Project, however, urges students to ask a deeper, more fundamental question: What do I really want from life?

Throughout the course, students attend two weekly sessions — a special guest lecture which sets the theme for that week, and a classroom-based group work session which provides the chance to speak out and exchange opinions about that weekly theme. 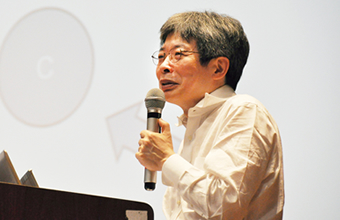 During lecture sessions, prominent figures from different walks of life take the stage to speak to students about a certain theme through their own perspectives and experiences. Speakers in April and May of 2016 included influential philosopher Hitoshi Nagai, Institute Professor and sought-after journalist Akira Ikegami, and playwright and director Oriza Hirata.

Hirata, the fifth of seven speakers in the series, spoke on the theme of "Communication as a path to true understanding." As humans, we must not only function as recipients of fragments of information, but also strive to understand the context that fills the voids. To further spark the interest of the tech-inclined audience, Hirata weaved in examples of androids being developed by Osaka University's Hiroshi Ishiguro, explaining that computers too struggle with communication and context. "The concept of communication will continue to become ever more important in science," Hirata forecasted.

A few days after each guest lecture, the theme of the week is discussed in classrooms of roughly 30 students each, allowing the first-year students to apply what they have heard and learned to themselves. During these sessions, participants are divided further into home groups of four or five, and then remain in these groups throughout the course. In this setting, students can comfortably discuss personal episodes, new discoveries, and reading related to the theme of the week, and start formulating the literature review that is submitted at the end of the course. Everyone is encouraged to voice their opinion actively.

The facilitator of these sessions takes a non-directive leadership role in order to construct an atmosphere where creative, interactive learning can take place. The process is as important as the result. 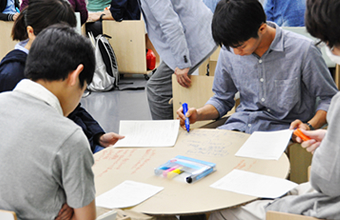 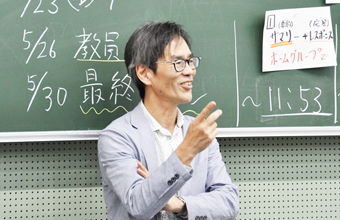 Facilitated by ILA Professor Tamio Nakano, one session following playwright Hirata's lecture began with all students forming a large circle. They introduced themselves and described how they felt on that particular day. Students then gathered in their home groups around entakun, round cardboard tables where individual and group thoughts are jotted down. After a brief discussion, students then rotated around the room to join other groups and share perspectives. Many continued debates on the differences between humans and computers, leading to a variety of definitions of humanity.

After a series of seven lectures and seven group work sessions, an organic sequence of input and output, the course culminates in a final presentation session. Each student announces the vision he or she has developed regarding the next four years of liberal arts studies.

The group sessions were clearly valuable and enjoyable experiences for students. According to Professor Nakano, experience is precisely what Tokyo Tech students need to improve their communication and presentation skills. Through home group activities and individual presentations, it is crucial for students to feel that they have created their own place, according to Nakano.

Nakano and his fellow facilitators had to do some group work of their own in preparation for the course. Realizing the difficulty of the facilitation task at hand, they held weekly meetings to discuss shared concerns and create unique classes based on the individual characteristics of each professor and each class.

Continuous development of each individual vision

After the completion of the Tokyo Tech Visionary Project, students have the freedom to move on to other liberal arts courses according to their own interests and visions. In the third year of the bachelor's program, however, home groups formed in the first year are reunited in the Liberal Arts Final Report course. Students share and compare how their perspectives have developed, and write a paper describing their original liberal arts story. Those who move on to master's level studies provide peer review support to third-year students writing Final Reports, while doctoral students facilitate new Tokyo Tech Visionary Project groups.

With this continuous cycle of learning and teaching, expectations regarding the Tokyo Tech Visionary Project and its positive effects on the Institute's students and faculty show no signs of decline.

Institute for Liberal Arts
—Connecting Science and Technology with Society—

Information on Institute for Liberal Arts inaugurated in April 2016