For a current list, see the following:Circle and Club activities

The triathlon — tough but fun

A triathlon may not sound like an agreeable pastime. In fact swimming 1,500 meters in the ocean, racing a bicycle 40 km, and then running 10 km — all in quick succession — may sound more like physical punishment. Nonetheless completing these distances is the goal for members of Tokyo Institute of Technology's Triathlon Club when they participate in annual intercollegiate competitions.

The club was established in 1993 and has about 20 members. "It depends on the individual member's interest what sports he practices regularly," says Shota Ito, the club's leader, a third-year student studying chemistry. "But the core members generally practice once or twice a week, and before a major event, as many as six days a week." 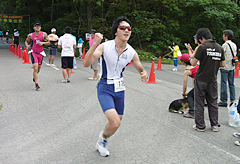 Members make use of the nearby Komazawa Olympic Park track for running practice, and swimming sessions take place in the university's pool. Groups also get together during the summer to practice ocean swimming in Sagami Bay near Kamakura. It's much tougher swimming in the ocean not only because of the waves, but also because during contests competitors swim close together and so often bump into each other in their efforts to take the lead.

"Practicing in a group makes it fun, even though it's hard work," says club member Kentaro Nakamura, a second year student and chemistry major. "And because you can choose from three different sports, it never gets boring."

Pleasure is not the only reward for the hard training. Ito notes that while his weight remains unchanged, he has grown leaner than before. Nakamura had run marathons since his high-school days, so he was already fit. However, he says that with the added swimming and cycling, his upper-body strength has really improved.

Ito adds that he has grown stronger mentally. "I've definitely become more positive, and taking part in serious competitions has helped me use my time more efficiently," says Ito. Nakamura also believes he now has more mental endurance. "When I'm faced with tough problems, I'm now more likely to continue working to overcome them; whereas before, I might have quit earlier."

These positive outcomes from the training are all good reasons why the club continues to attract dedicated members, despite the triathlon's grueling image. 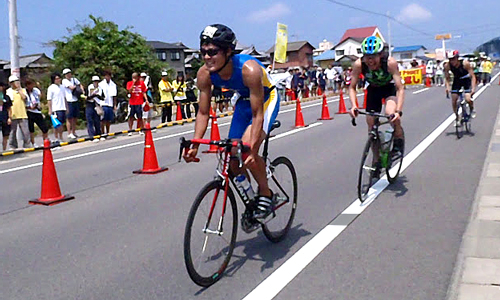 Harnessing the wind — running down to go up

Hang gliding is an open air sport that exploits the energy of thermals in hilly and mountainous regions. The pilot sits horizontally in a harness suspended from a winged airframe, which is guided by shifting of the pilot's body weight from side to side, and by pushing and pulling on a base bar to control altitude. The roots of the sport can be traced back to the 1880s, while Tokyo Tech's Hang Glider Club took to the air a century later in the 1980s.

"You take off by running and launching yourself from a hill or mountain," says Eiki Yasuda, a third-year student of civil and environmental engineering and the club's leader. "To land, you slow the glider down as much as possible and hit the ground running. I's great fun." 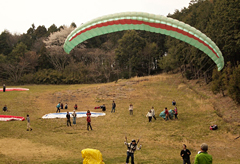 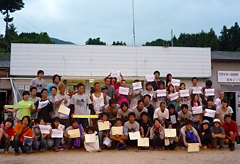 At Ashio, many students gather from universities in Japan to enjoy flying. 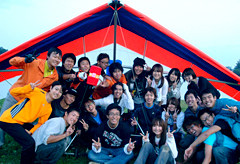 The club has fifteen members. On most weekends about half of the members head off by car to Ashio Mountain in Ibaragi Prefecture, about 100 km northeast of Tokyo to practice hang gliding and also paragliding, where the pilot is suspended from a parachute-shaped wing in a seat-harness, which is controlled using a series of cords. Each member owns their own hang glider or paraglider, which is stored in the practice area.

Although the sport has a reputation for being expensive, "we know how to keep costs down," says Yasuda. They usually camp out in tents over the weekend, while their hang gliders and paragliders are acquired used, sometimes from older members who pass their equipment on to newcomers when they graduate.

The sport also carries a reputation for being dangerous. But club member Akito Tateyama, a sophomore studying applied chemistry, says the danger is exaggerated. "We wear full-face safety helmets and protective gloves. And each member carries out his own maintenance of the equipment, which is the best way to make sure it's completely safe."

In addition, new members are taught by a professional hang glider expert until they have mastered full control of the equipment. "They start off jumping from a small hill, which makes it easy to learn," says Yasuda. After eight or nine days of such practice for paragliding, twice that for hang gliding, a member is ready to launch from Ashio Mountain at a height of around 400 meters. 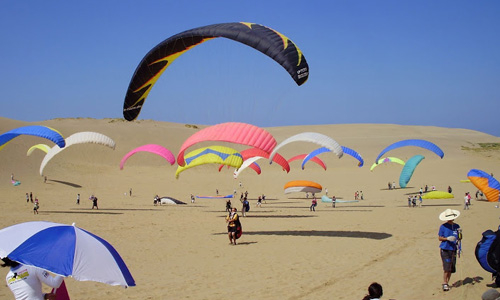 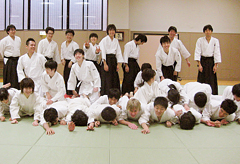 After a joint training session with other universities

Under the mentorship of a grand master, beginners can earn black belts within two years. Through Aikido training, you can improve your concentration and experience calmness.

Compete All Over Japan

Fencing is both an individual and a team sport where you can develop or hone your skills. Both novices and experienced fencers compete with teams from all over Japan. Give it a try!

Have Fun While Exercising

The Gymnastics Club is not only for people with experience. After one year of training, most beginners can turn a backward somersault and the training sessions are fun too! Tokyo Tech won the gymnastics championship for sci-tech universities three times in a row.

The swim team has an equal number of female and male members. They enjoy swimming and water polo all year long in Tokyo Tech's heated pool.

Powering through water towards Victory!

Rowing is an intense sport that takes place in sleek, narrow boats on the water. Rowing demands high degrees of endurance, strength, teamwork, mental toughness, and an ability to continue on when your body is telling you that you can't.

Rowing races are a test of endurance, strength and maintenance of good technique in changing water and wind conditions. Races are held over a distance of 2000 meters, with up to six boats competing at a time. It is similar to a track and field race, with a fixed starting line and a fixed finish line. Boats race side-by-side in their own lanes and the first to cross the finish line wins. There are preliminary heats, semi-finals and finals.

Three members of the riding team

The Cycling Club has three teams: riding, racing and cycle soccer. The riding team tours around various regions of Japan. One of the benefits of traveling by bicycle is the chance it provides to communicate with locals. 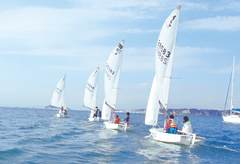 Yachting is a great sport for those who want to try something new and enjoy being in the open. Develop teamwork and self-confidence while challenging yourself in intercollegiate races! 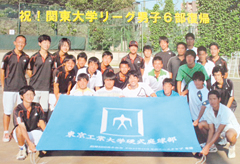 Promoted to the University Tennis League of the Kanto Region

Half the club members joined as beginners and developed their skills through friendly training with experienced players. The club has its own tennis courts and members can play whenever they want. 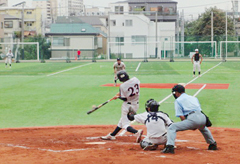 At Tokyo Tech members with various levels of experience play together and help each other improve. The club uses campus ballparks.