Fostering engineers with an eye for design 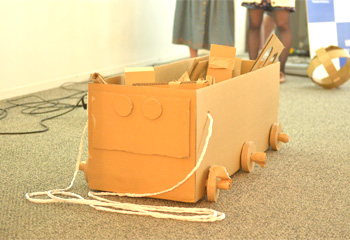 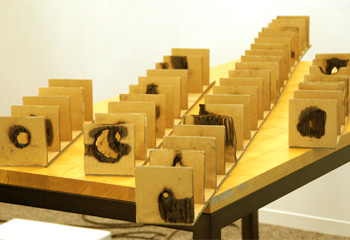 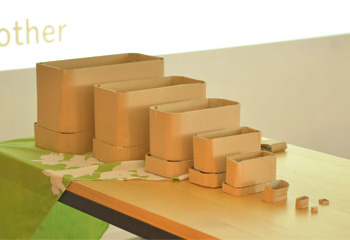 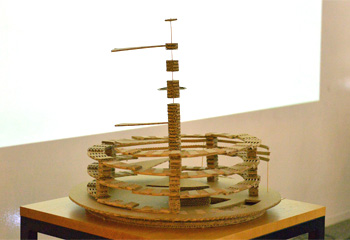 You might be surprised to know that the works pictured above were created for a course at Tokyo Tech. The Institute has traditionally provided specialized education in the field of science and technology. However, today's society demands people with communication skills who can make the most of their expertise. Concept Designing is a course that responds to this demand.

Concept Designing is one of the Interdepartmental Courses offered to graduate students at Tokyo Tech. It is a five-day workshop-style summer course.

In this intensive course, students create objects based on a given theme. The students work in groups, and they discuss among their group members to come up with a concept and a design. Each group creates an object based on their design and give a presentation.

The greatest feature of the course is that Tokyo Tech students form groups and work together with students from Musashino Art University (MAU).

Concept Designing aims to foster engineers who can incorporate various ideas and find a balance between functionality and design when developing products and services. Designers and engineers work together as teams for creative tasks such as product development. They must be able to objectively identify and utilize each other's skill sets, and resolve any issues arising from miscommunication in order to optimally facilitate their tasks.

In addition, Tokyo Tech students often communicate with one another in the language of science and technology. Likewise, students of art universities may communicate using the language of art. In order to unite the scientific knowledge of Tokyo Tech students and the designing skills of art students, cross-discipline communication is imperative. Concept Designing is, in a way, a course to cultivate global leaders who recognize the differences and similarities between science and art. 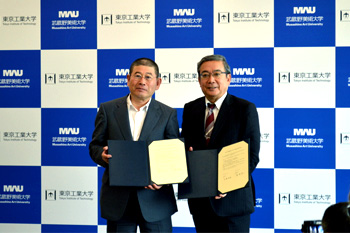 Tokyo Tech and MAU have been cooperating in conducting practical projects with the aim of connecting art and design with science and technology. The two universities have jointly offered Concept Designing every year since 2011 in cooperation with Mr. Hiroshi Tsuda, Chief Editor of Film Art, Inc.
In order to further develop this partnership, Tokyo Tech and MAU signed a cooperative agreement on June 28, 2013 for educational and research activities. 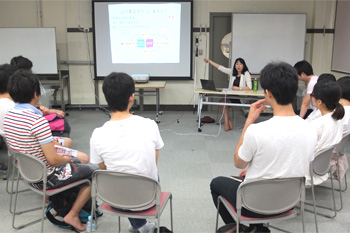 Course orientation for Tokyo Tech students took place at the Collaboration Center for Design and Manufacturing (CODAMA). Professor Kayoko Nohara of the International Student Center gave an overview of Concept Designing and participating students introduced themselves. Professor Nohara offered advice on how to express yourself effectively through self-introduction, which is a form of communication and self-expression in and of itself.

She also announced that the theme for 2014 would be "repetition" and that students would be using cardboard for their projects. 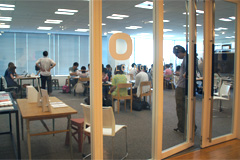 Mr. Ichiro Chiba, Head of MAU's Research Promotion Center, kicked off the first day of the course by introducing the purpose of the lectures and some important brainstorming techniques. Then, Mr. Takeo Nakano, lecturer of the Department of Visual Communication Design in MAU's College of Art and Design, talked about what students should be mindful of in designing their works. To illustrate his point, he shared one of his works and explained its concept. As an accomplished graphic designer, Mr. Nakano was able to inspire the students using real-life examples.

Professor Nohara followed up with a lecture on interesting and difficult aspects of communication, and it was finally time for a brainstorming session. Some groups started out by reading the handouts silently, and other groups cranked out relevant keywords one after another. Differences could also be seen in how they used sticky notes: some groups used only one color, and other groups used multiple colors. When there was not enough space on their desks, some groups moved to the whiteboard or to the floor. They had a lively brainstorming session trying to get to the core of the theme. 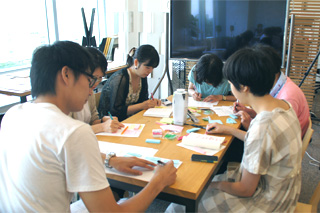 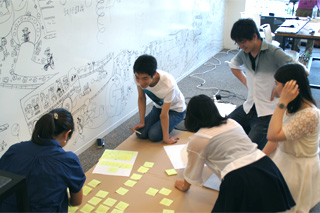 Using the space on the floor to brainstorm 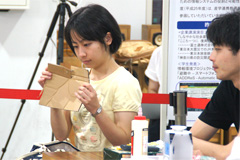 The groups moved to Tokyo Tech's CODAMA to begin producing their works. Before the session, MAU Lecturer Takahiro Kamimura from the Department of Sculpture talked about the characteristics of cardboard and how to use cardboard cutters and other tools. He sparked the students' imagination by showing them various ways to use cardboard, such as tearing off the surface layer and dissolving it in water. Before long, students could be seen experimenting with their cardboard pieces.

After the lecture, the groups began working on their projects. Some groups resumed brainstorming, going back to their ideas on sticky notes, and others jumped into cutting and pasting cardboard. 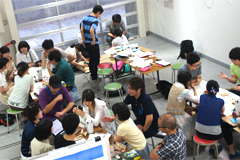 Professor Kyotaro Hakamata of the Department of Painting and other instructors went around the room to check on each group's progress. They made some constructive comments such as "This is too cliché," "Try making it more playful," and "Being fixated on one idea will make your work dull." One group was given advice to distance themselves from the theme and to come up with out-of-the-box ideas. Despite the hectic environment, students worked hard till late grappling with the theme. 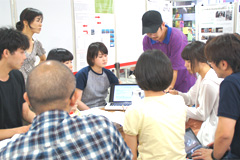 Instructor checking up on a group

There was no class on the third day, and the groups gave their interim presentations on the fourth day.

This was a way for instructors to keep track of the progress of each group and also for students to step back from their works and see how the other groups were doing. Some groups had dug deeper into the same ideas they had from day two, and other groups had moved on to different ideas. Whatever the case, the work of each group was taking shape.

From this day, Professor Masahiko Furukata of the Department of Visual Communication Design joined the workshop as an instructor. 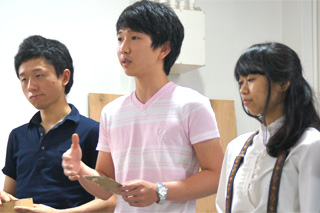 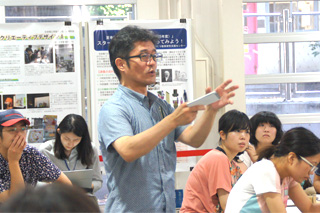 Students gathered again at the D-LOUNGE for the final presentation session, which was open to the public. The entire room was captivated by the original work and presentation of each group.

A train shaped like a toy chest ran through the audience. The group members picked toys out of the chest, played with them, and then put them back in the chest. People tend to think that they repeat meaningful activities every day.

However, some human activities are done subconsciously, such as putting things away. Repeated actions require ma, or time and space, between each action. The group aimed to express this ma. 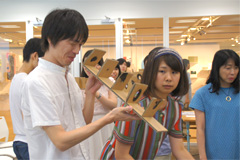 Audience members were invited
to touch the work

"Repeating something that cannot be repeated." With this concept in mind, the group thought of ways to express unrepeatable activities and came up with the idea of using fire.

They asked more than 40 Tokyo Tech students to burn pieces of cardboard until they felt the cardboard was burnt.

The group then collected the burnt cardboard pieces and arranged them in rows. The completed work even had a burnt smell to it. 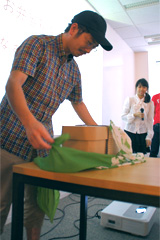 This group expressed their mothers' love in particular, as their influence on children is often special, through cardboard lunch boxes.

They began by presenting a big lunch box. Opening the big lunch box revealed a smaller lunch box and the process was repeated. Mothers are a big part of children's lives when they are born, but as they grow up, the mothers' roles become less absolute. 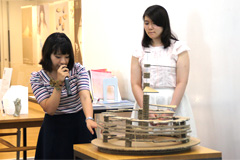 Group members elaborating on their work

While brainstorming, the group noticed that the core element of most repeated activities is time.

Therefore, they decided to visually express hours, minutes and seconds in their work.

The title of the work is "time domain," and it is meant to be a piece that will continue to evolve with time.

Summary and next steps

How was Concept Designing 2014?
When the course first started in 2011, Professor Hiromi Inokuchi and other MAU faculty members from the Department of Design Informatics played a central role in Concept Designing. This year, several MAU faculty members in the fields of sculpture, oil painting, new media art and graphic design joined the course. From Tokyo Tech, academic staff in the fields of communication and environmental psychology also joined the course. Students may have felt confused by instructors offering different perspectives and advice. However, I feel that's the nature of design. People may have different ways of appreciating art, but excellent designs offer something that appeals to our sensibility and are excellent no matter who looks at them.Conversely, what's bad is bad. Through this course, I hope students learned what it means to have a discerning eye for design.

What are the next steps for Concept Designing?
We plan on offering the course again in 2015. However, a five-day intensive course doesn't allow enough time or teach enough techniques in order for students to create anything with a high degree of perfection. We are planning to introduce an additional course called Product Designing in the future. The process from developing new ideas to creating prototypes takes time, so intensive workshops might not be ideal. I would like to develop a six-month course. Conducting a joint course with MAU would be interesting.