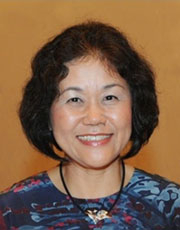 Shione Kinoshita has been vice president for human rights at Tokyo Tech since 2013.

After graduating from Waseda University's School of Law, Kinoshita was admitted to the bar in 1985. She jointly established Daiichi Fuyo Law Office in Tokyo in November 1986. Kinoshita obtained her Master of Laws degree from the College of Law at the University of Illinois in 1992.

Kinoshita served as vice president of the Daiichi Tokyo Bar Association in 2004. She was guest professor at the University of Tokyo's School of Law from 2010 to 2013, and external auditor at Suruga Bank, Ltd. from 2011 to 2014. She has been serving on the Japan Labor Law Association's Board of Directors since October 2014.