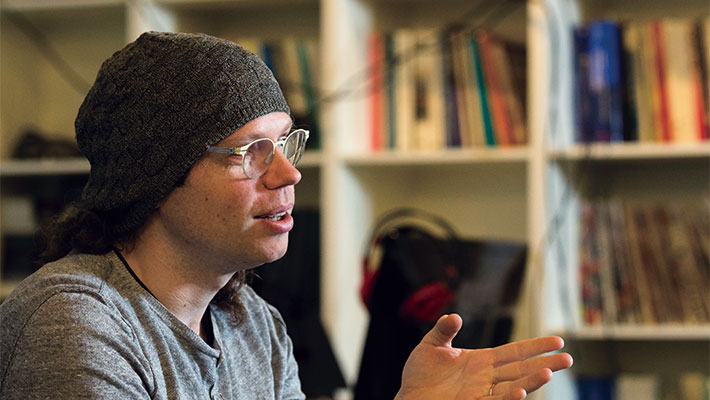 Fifteen years ago, a young man from France left his hometown and came to the Tokyo Institute of Technology (hereinafter, "Tokyo Tech"). At our school, he overcame difficulties and obtained his doctoral degree through the Tokyo Tech graduate program. Today, he has started to provide the world with a series of results from unique research that is a blend of art and computer science.

Learning of a stimulating research field through part-time work

About thirty researchers belong to the Sony Computer Science Laboratories (hereinafter, "Sony CSL"). Each of these researchers focuses on a unique research theme. I first set foot in Sony CSL when I was in graduate school (doctoral program) at Tokyo Tech. For my part-time job, I went to Sony CSL about twice per week in order to do programming as an assistant to researchers. My supervisor was a researcher in advanced mathematics—to be honest, I had absolutely no idea what he was doing in his research! In the adjacent office was none other than the neuroscientist Kenichiro Mogi. It was an extremely stimulating environment which opened my eye to a wide range of research methods. At that time, I had hit a wall when writing my doctoral thesis. However, the stimulation that I received from my part-time work enabled me to finish the thesis. I decided to apply as a researcher at Sony CSL and was hired after completing my studies at graduate school. 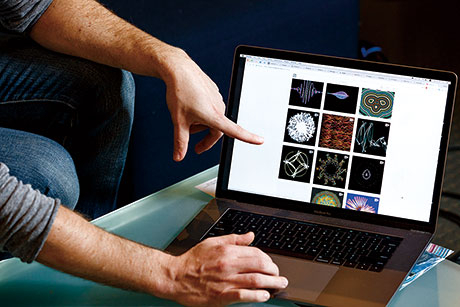 While in graduate school at Tokyo Tech, I conducted research on machine learning, computer graphics interfaces, and computer vision which utilizes the characteristics of human vision. Nevertheless, upon starting work at Sony CSL, I was told to conduct different research than what I did at university. I had been waiting for such a challenge and I started by researching video games. While in graduate school, I had opened a seminar together with younger students who sought employment at video game companies. After entering Sony CSL, I decided to try making video games myself. Furthermore, I had set my sights on intentionally creating kusoge (poor-quality games that were quirky and possessed unintentional humor)—a rare genre, to be sure! Why do people find some kusoge to be so interesting to the point that they can't stop playing? The positive aspects of Sony CSL are that the work itself is very interesting and originality is all that is required. Gradually, my research progressed from mere gameplay to the pursuit of beauty—art and aesthetics—which incorporated the visual research that I had conducted at graduate school.

Using computers to draw pictures had always been a hobby of mine. My goal for 2017 is to post a new original animation on Instagram every day, no matter how tired or intoxicated I might be! By committing myself to producing daily animation, I hope to discover a wealth of new ideas and enhance my programming skills—similar to how professional athletes improve through daily practice. As my goal for the coming year, I am considering switching to music production.

Eventually, I was placed in charge of art at Sony CSL. I proposed a program for automatic generation of designs which perfectly match the individual characteristics of users. The program was used to create logos for all researchers. A difficult aspect of creating pictures and designs is selecting colors. In order to reduce the work involved in color matching, I created a program which automatically extracts color schemes from input photographs and then generates a color palette. The result was the color palette extraction system "Omoiiro."

I had originally created Omoiiro as a background program for increasing work efficiency. However, through my work, I became acquainted with designers at ISSEY MIYAKE. The designers were interested in my program and we collaborated in an interesting project using Omoiiro to extract colors/tones from snapshots taken in cities throughout the world. The extracted colors/tones were then used in handbag designs.

The computer automatically decides upon colors based on distinct image data and photographs filled with memories. The results of this automatic processing fit wonderfully with human feeling. This is an interesting and meaningful phenomenon. Today, AI technology is spreading throughout society. In addition to pictures and designs, music has already been automatically generated. In the future, it will become possible to create films in which the story changes depending on the mood of the viewer on that day.

The imagination and ingenuity of children creates original "playtime" 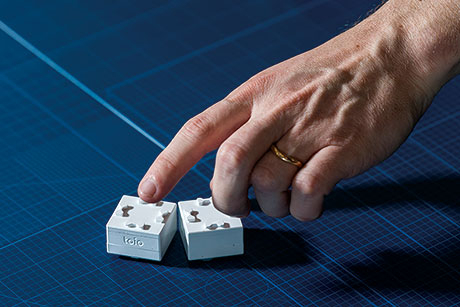 toio is a cube that breathes life into toys when used together with children's handicrafts, Lego creations, action figures, etc.

The "toio" project began from around 2012 and toio was commercialized by Sony in 2018. toio is a toy platform which elicits the imagination and ingenuity of children, automatically inducing "playtime."

Uninhibited imagination expands throughout the minds of young children and they conceive fantastic stories. However, during the process of growing up, children gradually stop devising their own playtime scenarios. Instead, they start using playtime scenarios (commercially-sold video games, etc.) which are provided by other people. There is the possibility that this change is a meaningful part of maturation.

However, I want children to play with ingenuity and creativity instead of playing passively. toio is not a simple toy; rather, it is a platform which expands the joy of playing with toys through the imagination and ideas of children. With toio, children combine a small cube-shaped robot with their favorite toys and use a ring-shaped controller. Through trial-and-error, children use toio to create their own play. Although this cube-shaped robot possesses unparalleled high performance for a robot of this size, it is merely a supporting device—the main actors are the child and their favorite toys used when playing with toio.

toio had to overcome various obstacles before it was released commercially. However, I was never discouraged. Since I had the experience of overcoming hardship when writing my doctoral thesis, I was sure that everything would be fine. Reflecting both, I now realize that experiencing setbacks at an early stage of my life was actually a blessing. Furthermore, I believe that I made a great decision in coming to Japan. I met my wife, who had been studying abroad in Japan at that time and I became acquainted with many outstanding people through my work. Japan is a very livable country which presents a variety of opportunities. Moving forward, I look forward to many more encounters with wonderful people. I will live creatively while seeking my own original excitement and beauty. 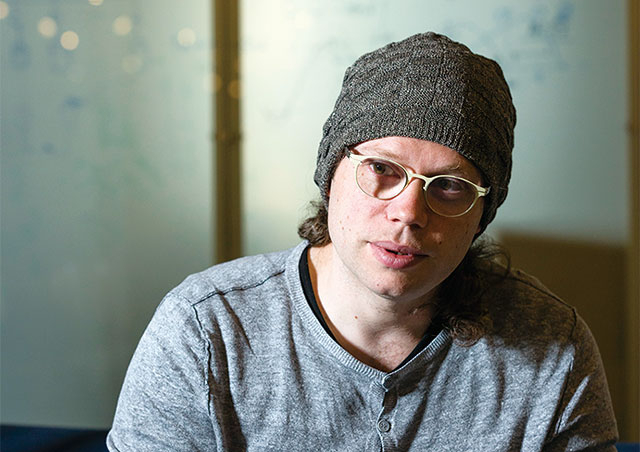 At the age of 18, Alexis skipped two grades1 and entered the Supélec, École supérieure d'électricité, which is one of the Grandes Écoles (specialized institutions of higher education) in France. He graduated the Supélec in 2004 with a major in energy and information science. In 2002, he entered the Department of Computer Science at the Graduate School of Information Science and Engineering, Tokyo Institute of Technology. At Tokyo Tech, he completed the master's program2 in 2004 and the doctoral program in 2009. In 2009, he entered Sony Computer Science Laboratories, his current employer.

1
In the French educational system
2
From 2002 to 2004, he studied concurrently at Supélec and Tokyo Tech.