For a greener, safer synthetic chemistry

Into the world of organic synthesis where new discoveries await 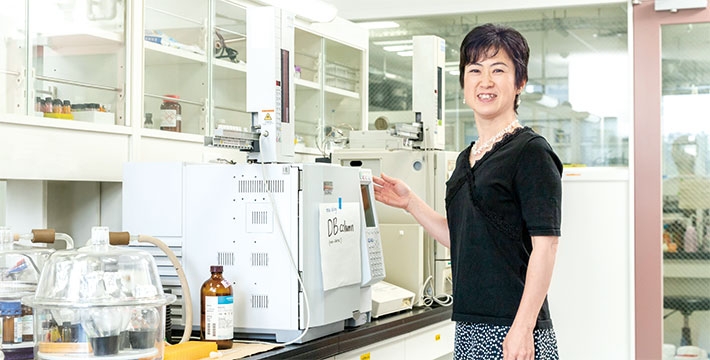 Into the world of organic synthesis where new discoveries await

Green chemistry is based on the concept of being safe for humans and the environment. It refers to chemistry that uses or emits little to no harmful substances. How can we efficiently synthesize essential materials like pharmaceuticals and agricultural chemicals while also protecting the future of the environment? Associate Professor Tomoko Matsuda is working to use enzymes as catalysts with carbon dioxide and oxygen in the air as reactants.

While pursuing the development of synthetic reactions to meet the needs of the future, her research is leading to never-before-seen discoveries.

Why use enzymes as catalysts for organic synthesis? 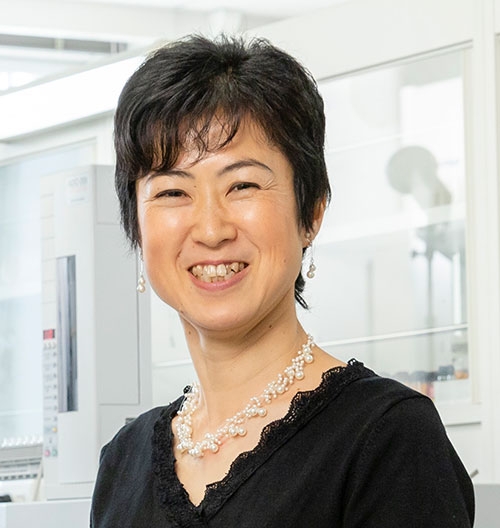 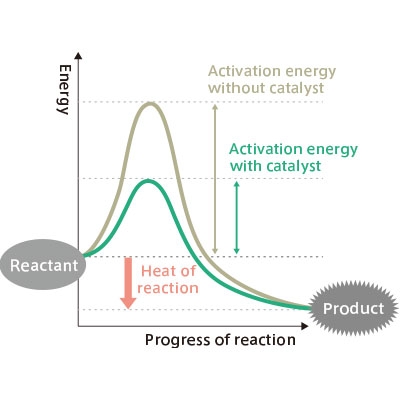 Enzymes are proteins linked by amino acids that act as catalysts with in vivo chemical reactions. A catalyst is a substance that lowers the activation energy needed for a reaction. For example, if the progress of a reaction is represented on a graph as the x-axis and energy as the y-axis, a high peak will be drawn when there is no catalyst, and low peak when a catalyst is present.

Matsuda lists four advantages of using enzymes as catalysts for organic synthesis. "(1) First, since enzymes have evolved in nature over a long period of time, they are complex and have high selectivity for specific reactants. There are no side reactions in an enzyme reaction, so only what is desired is made. Therefore, a chemical reaction that, for example, required four steps can be reduced to one step. It requires less energy, making it better for the environment. (2) Next, if the microorganisms that produce the target enzyme can be acquired and cultured, many can be produced, so there is no risk of depletion. (3) The reagent and reaction conditions necessary for the reaction to proceed are safe. Some chemical reactions use explosive reagents, but if it is an oxidation reaction using enzymes, safe air itself can be used. Since there is little risk of side reactions, it prevents unexpected dangers. (4) Lastly, enzymes work under the same conditions as inside the human body at 37℃, so the reaction progresses at normal temperature, resulting in good energy efficiency." (Matsuda)

A good catalyst is highly selective and rarely causes side reactions. Using catalysts for reactions is one of the necessities in green chemistry.

Using carbon dioxide and oxygen in the air

With enzymes as catalysts, Matsuda is working to develop reactions that effectively use carbon dioxide and oxygen. It was found that when carbon dioxide was used in a solvent while in the supercritical state (both gas and liquid), a lipase (enzyme) that had not reacted until then suddenly became active. It was the first time ever that a reaction could proceed by dissolving carbon dioxide in a solvent and using it as a catalyst for the enzyme reaction.

Matsuda explains, "While researching solvents using renewable raw materials, we wanted to use carbon dioxide as a valuable resource, since it is a highly diffusible solvent. We can reduce the amount of solvent needed by increasing the pressure of the carbon dioxide and expanding the volume." Much consideration is given to the environment.

Matsuda's research is based on using carbon dioxide, which is safe and abundant, rather than organic solvents derived from fossil resources, which can be depleted. It has been found that even in enzyme reactions where carbon dioxide is used as a reactant, the reaction proceeds better at high pressure. She is also studying oxidation reactions where oxygen in the air is used as the reactant. Since oxidation reactions use explosive substances, there is always the possibility of an accident, even if it is designed safely. "If oxygen in the air is used as the reactant, it will not explode, and if you use an enzyme, less energy is required. For example, even if people who live near a chemical factory are told there will never be an explosion, people will still feel uncomfortable. To eliminate this concern, we are developing oxidation reactions that do not use explosive substances." (Matsuda)

Enzymes still have potential. At Matsuda Lab, it was found that enzymes produced by a type of mold called Geotrichum candidum have very high stereoselectivity.

For example, if the enzyme is likened to a glove, the product is made by placing the material inside (bonding). Depending on the orientation of the material (right hand or left hand), it can only be placed inside one of them. But by changing the amino acid sequence of the enzyme through genetic manipulation, "similar to how a right hand looks like a left hand in a mirror, the material bonds in the opposite direction and creates a product with an opposite three-dimensional structure. And the fact that it was made by a mutation of only one amino acid gave us a major clue for future research." (Matsuda)

According to Matsuda, "There are clues to the next step, such as how to improve it based on comparison with other enzymes." 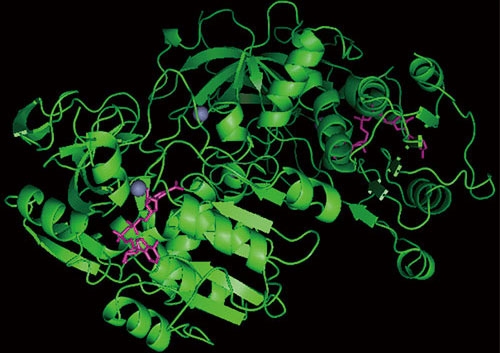 X-ray crystal structure analysis and simulation(Joint research with the High Energy Accelerator Research Organization and Osaka University)
By examining the structure of the enzyme, it is possible to determine how the reaction is made easier according to where the reactant enters, why it enters, and how far it enters. Then comparison with other enzymes is carried out. 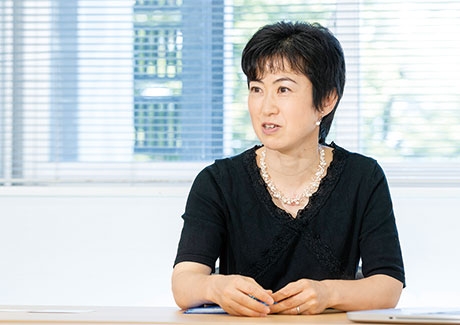 When in graduate school, Matsuda says that her mentor Kaoru Nakamura, an associate professor at the time at Kyoto University, was doing organic synthesis with enzymes, which was the start of her research. When she was an assistant in the laboratory at Ryukoku University, Professor Tadao Harada, with whom she still often consults, began using carbon dioxide for enzymatic reactions instead of supercritical alcohol, which was the origin.

"The professors allowed us to pursue whatever we wanted. Because of this, I also want to give students freedom." (Matsuda)

She cultivated the idea of valuing freedom while in the United States during high school and university. Matsuda explains, "Education in America helps you develop what you are good at. I got into the habit of doing what I wanted to do without worrying about who was watching. That's why I still research what I want at university. Both race and individuality are recognized in that society, so in the laboratory, I was able to conduct research with other students without discrimination." 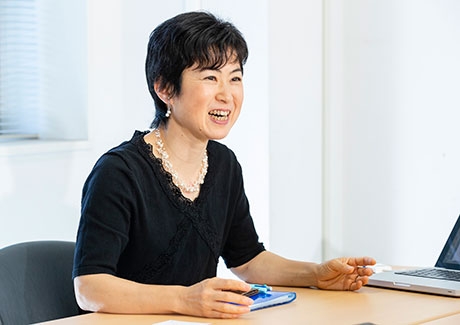 Her personality is also reflected in the atmosphere of the laboratory. At the School of Life Science and Technology, there is an extremely high ratio of students from overseas, and in the student rooms, there are always opportunities for students to exchange opinions and learn the importance of cooperating with others. Matsuda herself values the opinions of students and teamwork.

"Research cannot be done alone, and finding new ways of thinking is stimulating. I have learned many things through collaborating with students. Everyone seems to be unique and enjoy what they are doing. Even when an experiment fails, they quickly recover. I want them to engage in many different things and grow as people." (Matsuda)

Because she hated competition, she would try things that no one else was doing. She has always valued being herself, nature, and her hobbies. Matsuda bashfully added, "I think each of these attitudes leads to great discoveries."

"Enjoying science in the lab, discovering new things, even if they are small, and continuing to engage in research day after day to help solve some environmental problem is something very attractive. I want to further develop my research on using carbon dioxide and oxygen and demonstrate its potential. I want people to see that enzymes are useful catalysts." (Matsuda)

Looking first at her own research and then at her students, she continues, "What an individual can do may be small. However, if it is new, I am happy. And if it helps with an environmental problem, it gives a sense of fulfillment. I want to continue enjoying discovery." 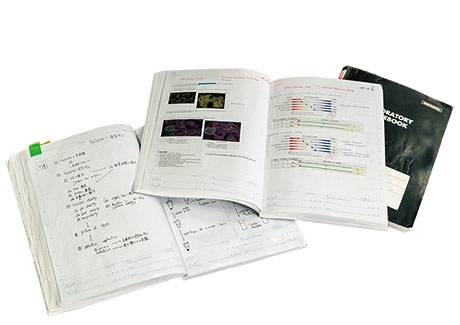 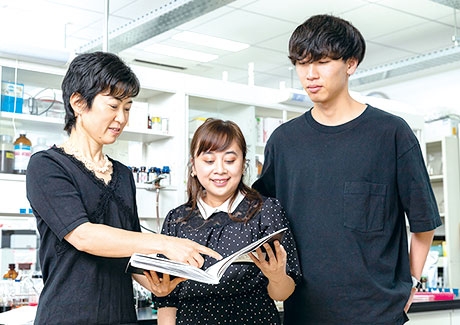 Each student has a research notebook.
They do research every day while communicating with Matsuda based on detailed theories and findings. 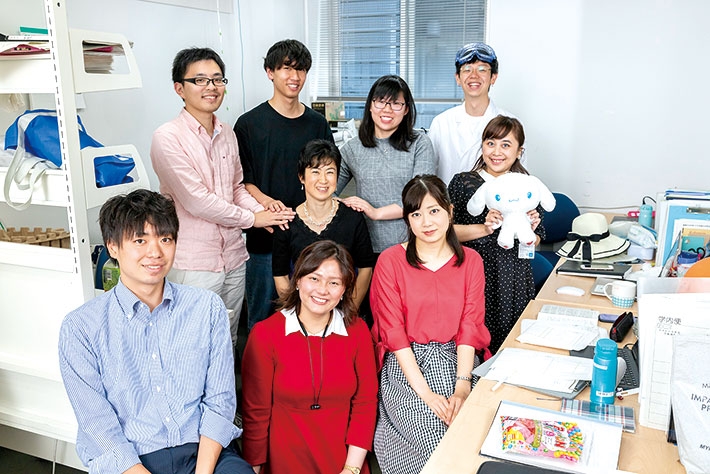 Asked about the strength of Matsuda Lab, Matsuda and students immediately answered "we have good members." 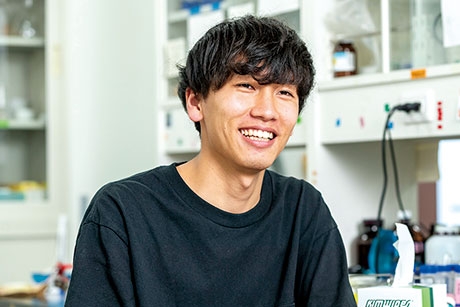 My research theme is carboxylation reactions using carbon dioxide as a reactant, and I am working on coenzyme regeneration, which plays a role in advancing the main enzyme reaction. It's fun when I am able to see that a reaction occurs according to what I expected or can see how my skills have improved. I wanted to join Matsuda Lab because I was interested in organic chemistry and enzyme engineering, where practical things are produced by theorizing and assembling things you can't normally see. I plan to continue to the master's program, and my goal before graduation is to give an interesting and successful conference presentation. Matsuda-sensei is kind and caring, and respects our independence. I feel that this laboratory is a place where people can work together regardless of seniority. 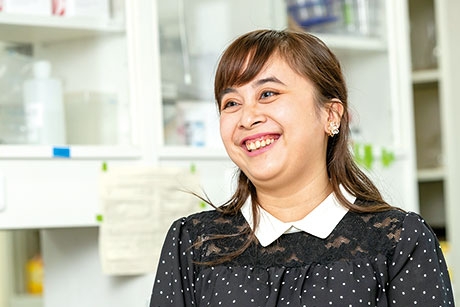 I came to the Matsuda Lab as an exchange student from Indonesia when I was a 4th year undergraduate. I really enjoy being able to actually carry out enzyme engineering experiments that I had only read about in textbooks. In the lab, we study the structure of enzymes and consider whether it can be used for beneficial reactions, and develop fixation methods for applying enzymes to industrial use. I often participate in conferences where I am able to listen to diverse ideas and presentations, and I also enjoy collaborating, where I can discuss things with people from different fields. Matsuda-sensei has a flexible way of thinking, and it is easy even for overseas students to talk to her. She is also interested in our life, not just our research, so she is like my mother in Japan. In the future, I want to work in academia and continue my research, in not only my home country and Japan, but in other countries as well.