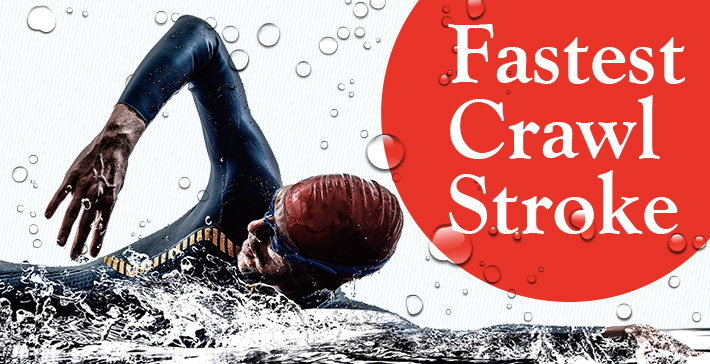 In two years, the Summer Olympics will be hosted by Tokyo, where the Ookayama Campus is located. Among the Olympic events, swimming is one of the most popular sports. The crawl is especially popular because it is the fastest of the swimming events. Identifying the most efficient crawl stroke has long been the dream of researchers. Research results* have attracted attention as a potential path to the realization of this dream, and Tokyo Tech's Motomu Nakashima Laboratory has played an important role in this research.

Professor Motomu Nakashima developed a swimming humanoid robot with graduate students back when he was an associate professor. Studies on swimming are traditionally carried out by performing measurements on actual swimmers. During these studies, however, reproduction of human movements was difficult because they vary according to the physical characteristics of individual swimmers. This swimming humanoid robot made it possible to perceive changes in propulsive force caused by slight differences in movement, which advanced the clarification of swimming mechanisms significantly.

An actual swimmer’s physical constitution was captured by three-dimensional scanner and reproduced in half scale. 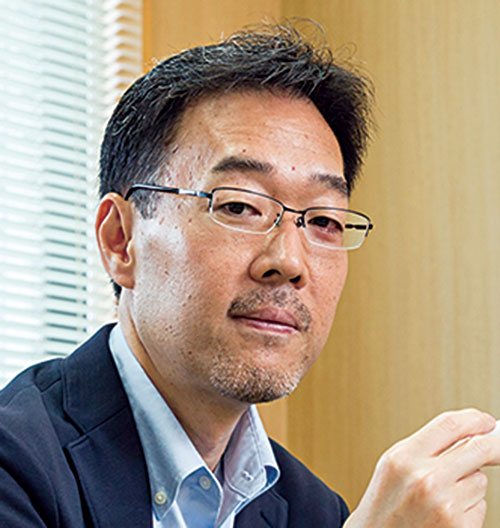 1990: Graduated from the Tokyo Tech School of Engineering, Department of Mechanical Engineering

1995: Obtained his doctorate from the Tokyo Tech Graduate School of Science and Engineering.

In freestyle swimming competition, the crawl is the preferred stroke because it is the fastest. The crawl is also taught at swimming schools and in P.E. classes. It is, however, one of the more difficult strokes. Comparing advanced swimmers with beginners the difference in the smoothness of stroke, that is the continuous movement of each arm to propel the body forward, is significant.

Basically, the crawl is a combination of the strokes and kicks. Strokes determine the speed, and are classified into S- and I-shape pulls.

The I-stroke pulls linearly under the water. This style was the trend before the 1972 Munich Olympics. American swimmer Mark Spitz broke one world record after another to win seven gold medals in the freestyle and butterfly events (He broke the Olympic record for the most medals won by a single athlete). He used S-strokes, which pull water in an S-shape below the body. After this, everyone started using the S-stroke. 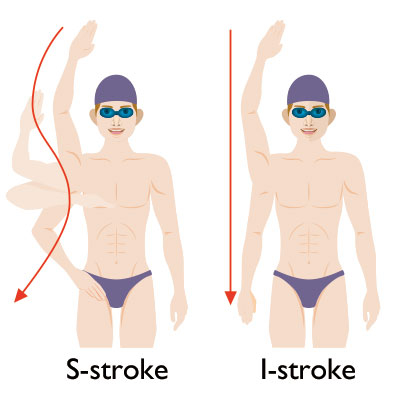 It was Ian Thorpe who changed the trend after winning several gold medals during the 2000 Sydney Olympics and 2004 Athens Olympics. He used the straight I-stroke to great advantage and reignited the debate about which was the best stroke.

"Being away from the debate, I have carried out research to clarify the mechanisms of swimming using dynamic approaches," said Professor Nakashima. "The crawl evolved into its current style only about 100 years ago. Since the style has been never completely standardized, the debate about efficiency has been ongoing. I simply thought that carrying out research to clarify the mechanisms of the arm movements that propel the body forward, and the mechanisms of water flow around the swimmer would lead to the most efficient and fastest swimming style."

The difference between S- and I- Strokes is the vortex generated around hands.

SWUMANOID reproduces the physical forms and motions of the actual swimmer and realizes realistic swimming motions utilizing all joints of its body!

Professor Nakashima participated in joint research with five researchers both in Japan and overseas, including Professor Hideki Takagi at Tsukuba University. They attempted multilateral approaches to identify the fastest crawl stroke applying the most advanced flow measurement and analysis technology, and simulations using swimming humanoid robots.

In January 2016, the long-awaited results of this study were released. The results show that the S-stroke achieves propulsive force with less power, which is effective in mid- and long-distance swimming events requiring efficiency (400 m and longer) while the I-stroke is effective in short-distance swimming events requiring absolute speed rather than efficiency (50 - 100 m).

The results of this study did not simply suggest whether the I- or S-stroke should be chosen for the fastest speed, but also suggested that these two strokes should be applied depending on the distance as well as the physical constitution and muscle strength of the individual swimmer.

"Human swimming motions vary and exhibit complex flow phenomena, which have not yet been clarified completely. We need to conduct further research to clarify the mechanisms. We will continue our research on swimming styles with a focus on individual differences in physical constitution, muscle strength and swimming skill." 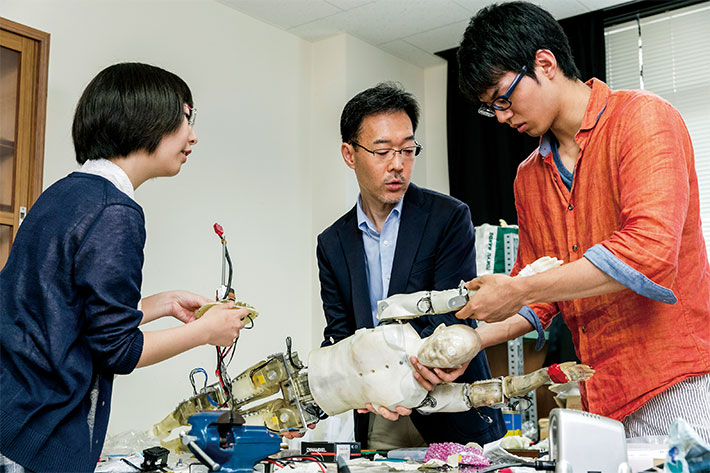 Professor Nakashima wanted to quantify the sense that expert swimmers have as a principle and mechanism with data acquired from experiments and simulations. This motivated him to conduct research on swimming styles.

"There were some studies focusing on specific parts of the body, such as the hand; however, no one had examined the entire body. Because it was a largely unexplored field, it was more of a challenge; but this made it all the more interesting for me. I am not a good swimmer, however, so from the start I wanted to work with researchers familiar with the sport," said Professor Nakashima.

He joined the Japanese Society of Sciences in Swimming and Water Exercise as well as the Japan Society of Mechanical Engineering to become familiar with others doing research on competitive swimming.

Tsukuba University's Professor Takagi, a member of the joint research team for this study, was a water polo player in his school days; and he now coaches the university's water polo club. He has also served as the coach for the men’s national water polo team, so he is an expert. Using his well-developed sense of swimming and water polo, he has worked on practical research in biomechanics related to competitive swimming, and research in flow dynamics. He brought both knowledge and practical experience to this project.

The simulation model and swimming humanoid robot developed by Nakashima laboratory reinforced this knowledge and experience to enable them to achieve their goal.

The simulation model that Professor Nakashima developed is called SWUM, and the software is called Swumsuit. These made it possible to analyze the dynamics of swimming. This included the changes in fluid forces and body motions generated by differences in form that influence each body part.

"This software can simulate four swimming styles, the crawl, breast stroke, back stroke, and butterfly. In addition to its standard ability to simulate body motion, the most recent version of SWUM is capable of musculo-skeletal simulation that clarifies the power that each muscle exerts."

Another important tool this research group has in its corner is SWUMANOID, a swimming humanoid robot. An actual swimmer’s physical constitution was captured by three-dimensional scanner and reproduced in half scale. Utilizing computer control, a total of 20 waterproof motors are used to move all of the joints on the body, which enables the complex motions used in actual swimming. The mechanisms of the vortexes that S- and I-strokes generated were clarified using underwater robots such as SWUMNOID in a large water flow tank at Tsukuba University. 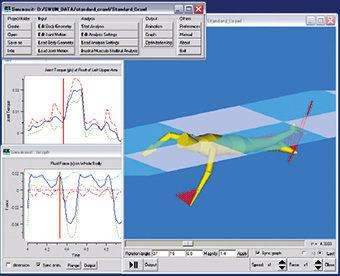 This is an analysis diagram of the crawl utilizing SWUM. The red lines shown from the body indicate the fluid forces influencing each part of the body. 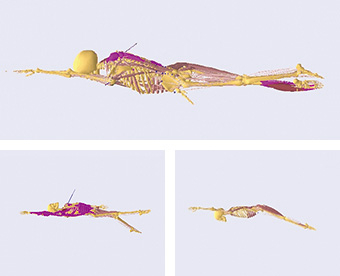 SWUM can simulate all of the skeletal muscles used while swimming. It is capable of simulating four swimming styles, the crawl, breast stroke, back stroke, and butterfly.

It is hard to describe the Nakashima laboratory in a word. It is divided into three sections; sports engineering, which looks at sports from the perspective of engineering, biomechanics, which applies mechanical dynamics methodology to the human body, and biorobotics, which produced SWUMANOID.

“Our principle is to apply conventional mechanical engineering, add the perspective of information, and clarify a wide range of as yet unknown issues regarding human bodies.”

Professor Nakashima was once a Tokyo Tech student. While enrolled here, he started studying swimming mechanisms in fish and dolphins. About 15 years ago, he started focusing on human swimming.

“When I was a high school student, I liked physics and mathematics; but, at the university, I wanted to do something that would be useful to people and society rather than simply study physics and mathematics for their own sake. For this reason, I chose mechanical dynamics. For my graduation thesis, my advisor suggested that I do research on fish and dolphin swimming mechanics. I took his suggestion because it sounded very interesting to me.”

The graduation thesis for his undergraduate program became the foundation for his current research on swimming, and resulted in a great achievement. Nakashima’s laboratory has been working on a wide range of research themes related to swimming, themes such as throwing motion in water polo, swimming by individuals with prosthesis, and swimwear for those who are not good at swimming. He also carries out joint research with a bathtub manufacturer on how people in the bath strain their muscles. It is very interesting. We are not completely relaxed in the bath. We usually strain our body muscles unconsciously to prevent ourselves from drowning.

“We examine how we strain our muscles through simulations using SWUM. The results may lead to the development of a completely safe and comfortable bathtub.”

Professor Nakashima is driven by curiosity about the principles and theories of human motion. His enthusiasm attracts students who are interested in the relationship among nature, technology and humans. 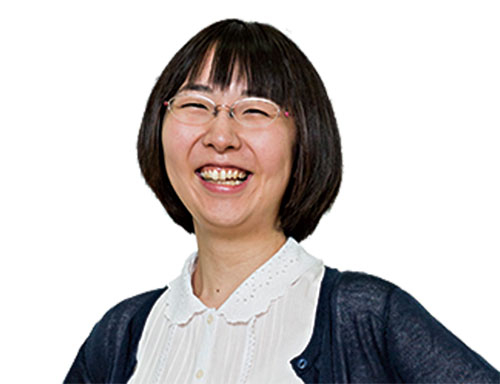 While I was an undergraduate, I worked on satellites. After I entered the graduate school, though, I wanted to work on issues that were more closely related to humans. This is why I chose Professor Nakashima as my advisor. My research theme is swimming stokes in persons with disabilities. I had almost no knowledge about swimming; but with the help of Professor Nakashima, I have had the chance to meet with many Paralympic swimmers and coaches. They have all helped me to advance my research, and I truly feel that I am engaged in something that will help people.

He's always available and we can consult with him about anything. He likes research so much! 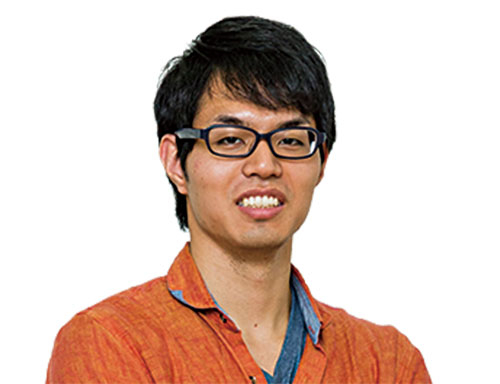 I was swimming in high school and I wanted to study sports at university. I found “Sports Engineering” in the Tokyo Tech pamphlet, and now I am studying here with Professor Nakashima. I am not participating in any sports now, but I continue working out. My research theme is a simulation of Canadian canoe paddling. After completing the master’s program, I really want to be involved in the 2020 Tokyo Olympics.

He helps each student through weekly individual meetings.

Affiliation of students registered before AY2016