Traveling through the history and future of architecture 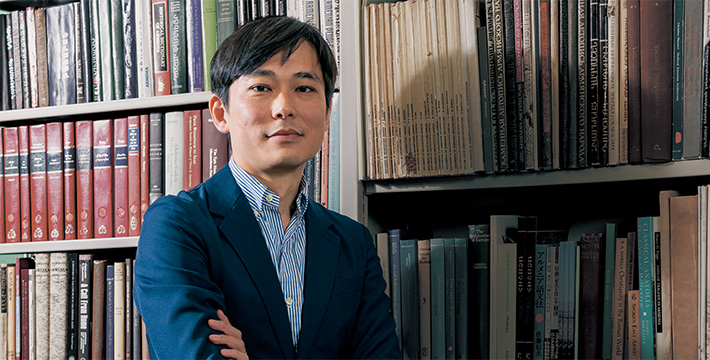 Unraveling the architectural history of the Caucasus

Associate Professor Yasuhito Fujita studies the architecture of churches in the Caucasus, especially Armenia and Georgia.

Encountering the hidden histories of architecture and cities, and considering their historical meanings and formation, he works to help preserve cultural heritages and townscapes.

What was it about this land, so remote from Japan, that lured him out there? What has he seen?

We took a look at his overseas survey research.

Using detailed surveys to learn the history of a building 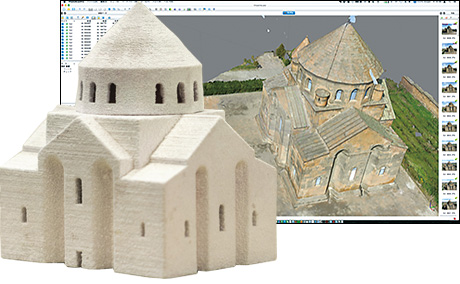 Photograph, gather, record. The basics of surveying historical buildings are to record everything possible. When Fujita arrives at a site, he takes photos of the whole building, its decoration, and even details like the inscriptions. He also takes video. "The rich amount of information in video, such as sequence to the church, landscape of its surroundings and site atmosphere." (Fujita)

Recording the shape of the building is mainly done using laser measurements. This is painstaking work that can measure the depths and widths of each individual wall and pillar so that they can be recreated down to the building’s distortions. In recent years, 3D scanners with depth sensors are being used to directly obtain a building’s digital 3D data. This is helpful if buildings have complex forms or are partially collapsed, as they can record the state of the building as it is. "We’ve started using drones in the last few years. They let us learn about the top parts of buildings which we couldn’t easily see before, as well as view damaged areas safely, without having to go onto the roof."

Drones have been used to photograph Sanahin Monastery in Armenia, a World Heritage site, as well as its surrounding area. Previously, when collecting photogrammetry data, we had to check each masonry joint in a building by eye, an almost monastic method. But today, with drone photos taken from over a hundred points, we can use special software to calculate the 3D data of the building. The research is based on the accumulation of this sort of detailed survey data. However, there are limitations to what devices can be taken into a site, and only limited periods in which surveys can be made. "Simply because survey sites are often remote, it is a battle between funds, manpower, and time," Fujita notes.

Drone photography of Sanahin Monastery. They show the top parts of the building, which cannot be seen from the ground, as well as the building in its surroundings.

Why is this building shaped as it is? 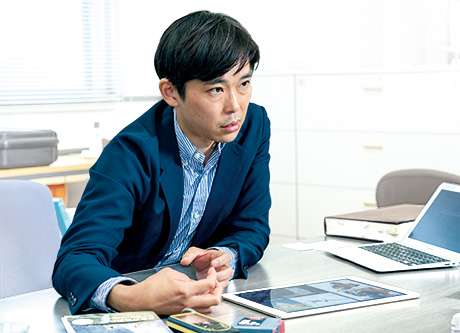 Influenced by his father, who worked in building design, Fujita entered the Department of Architecture and Building Engineering at Tokyo Tech. While learning architecture, he realized that, rather than designing and constructing his own buildings, he wanted to learn about the process of design itself, and how building forms develop. "After a few years at Tokyo Tech, I realized there was a discipline of architecture that wasn’t about constructing buildings, and I found myself really drawn to it."

In the master’s course, he studied under Professor Shiro Sasano. Sasano invited him to accompany him to Armenia for a survey of church architecture. "Initially, I had this vague idea of studying Islamic architecture. But as I was learning about Armenia, I realized that my interest was in the exchange of architectural culture, and so Armenia, on the fringes of the ancient Roman Empire and at the crossroads between East and West, was much more suited to that than Islamic architecture. And twenty years after that realization, here I am," Fujita says, laughing.

Surveys of historical architecture involve, in addition to surveys for purely architectural history purposes, surveys designed with an eye towards preservation and restoration of buildings. In these latter surveys, Fujita enlists the help of researchers in seismic engineering and building structure, and they carry out structural analyses and strength tests using stone samples. "In the West, research into the history of church architecture is mainly part of art history. But in Japan, architectural history is an engineering category, and we look at architecture from a technological perspective as well. This is a strength in doing research in the regions, and, with the help of researchers from Tokyo Tech and other places, I hope to be able to put back some of our research results into the area as a way to contribute."

Spare moments in the midst of surveys are rare, but meals are a fun break.

There are a number of issues in terms of preserving historical buildings. In addition to the obvious issue of that country’s economic situation hampering preservation, there are also the problems of getting locals to understand the historical significance of these buildings, and avoiding damaging the value of these buildings when renovating them for increased convenience. "While the buildings there are part of the cultural heritage of humanity, they are, more than anything, where the local people live their lives. We can’t push our values on them; we need to come up with ways to protect the buildings appropriately while ensuring the locals’ spaces; we need to share them. Unfortunately, at present there’s a lack of connections between researchers and restorers in the countries we’re surveying."

Getting back to pure architectural history research, Fujita says, "The historical value of the buildings in this area hasn’t actually been properly established. As a researcher of architectural history, I want to be able to explain what meaning this group of buildings has within the larger flow of the history of architecture. I’ll always be considering ‘ why is this building shaped as it is ’ wherever I go."

Bringing in a technological perspective to a planar view 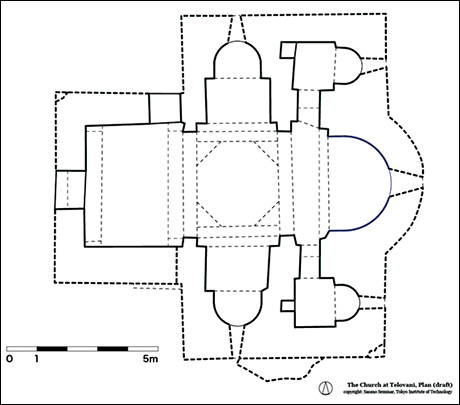 Surveyed plan of Telovani Church of the Holy Cross in Georgia. The cruciform shape is one of the classic layouts of church architecture.

Research on the architectural history of churches has mainly been done by western academics, with a focus on the art history perspective. Their view of churches has generally been planar, seeing them as expressions of the crucifix symbol of Christianity. "Planar views are certainly one way of showing the characteristics of architecture, and there’s probably some symbolic meaning inherent in them. However, it’s a one-sided way to consider architecture, which is three-dimensional. The perspective of seeing how stone is assembled to create a 3D building has been lacking in previous research. This question was the starting point of our research."

Fujita’s doctoral thesis focused on how assemblies of stone could form shapes, from the base of a building to the dome on top. Experiencing actual buildings on site, he carefully observed what sorts of stone were used where. "Putting myself inside the buildings, touching them, and getting a hint of the meaning to their forms is the real pleasure of my surveys." he states.

Why travel so far from Japan? Essentially, it was just a simple interest in knowing more about the history of the architecture that developed in that region. "However, as an outsider, I also have an interest in engaging with the history of architecture in that region. By bringing in the idea of considering church architecture forms in terms of technology, a perspective that hadn’t existed locally, we can unveil previously unseen aspects of the history of its architecture, and discover and share new values for the buildings. And, if the new measures for preservation and restoration that arise from this can be given back to the region, then there is meaning in our research that goes beyond the barriers of language or location." 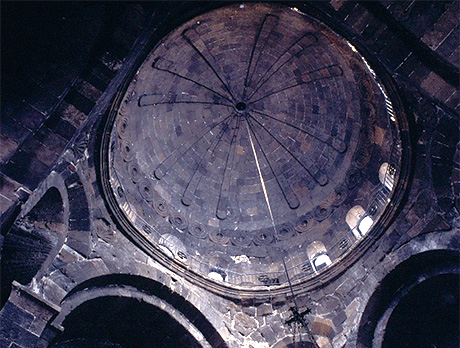 Saint Hripsime Church is an excellent example of the characteristics of Armenian churches. The stones are interlocked smoothly from bottom to top, forming the dome. 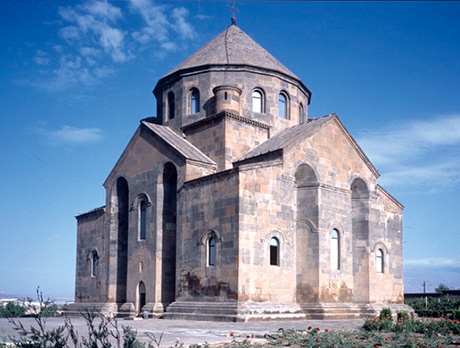 External view of Saint Hripsime Church. It is considered one of the eariler examples of church architecture in Armenia.

To guide the history of architecture into the future

Fujita encourages his students to not worry about wasting time or making mistakes. "One of the benefits of being a student is that you can afford to fail gloriously. I want to see you break out of the limits of your assumptions." he says. "The same applied to me, but there are a lot of students out there who don’t actually know what aspect of architecture they’re interested in. And this is why you should be greedy to watch, listen, and touch all sorts of things. If you’re going to study architecture, a combination of all sorts of things, then being omnivorous is just right."

His research scope has broadened from Armenia to eastern Turkey, Georgia, and Syria. But in the future, Fujita has developed, as he puts it, "an interest in examining the coast of the Black Sea and Iran, deepening our understanding of the historical exchanges of architectural culture." Another prospect he has is finding ways to train people to follow in his footsteps. This is because there is an issue with a lack of younger researchers being trained in the countries he is conducting surveys in.

"I wouldn’t be able to come close to what Ernest Fenollosa did as a foreigner for Japanese art in the late 19th century, but I would like to continue collaborating in research so that people can see the meaning and value of their cultures, and want to continue to learn about them." 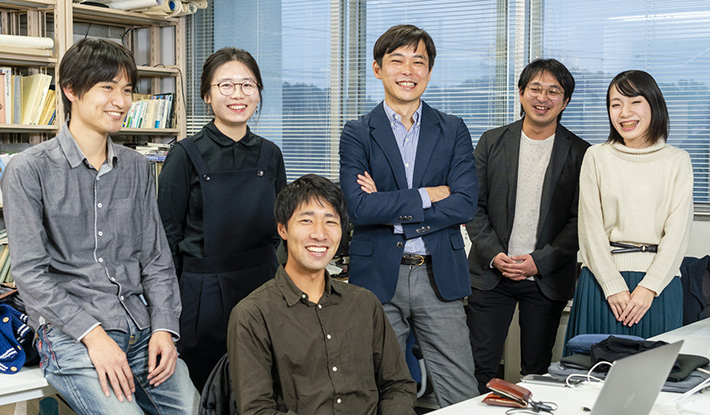 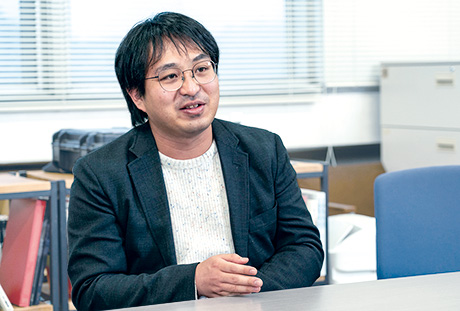 My research is on urban development in historical streetscapes. In fact, when I was a first-year master’s student, I took a year’s leave to take part in town revitalization in Tsuwano, Shimane Prefecture. That led me to launch my own sole proprietor business three years ago, and I am working on measures to deal with vacant housing as a special official while drawing on my research. Fujita-sensei is someone I can discuss things with without hiding anything. He was very accommodating when it came to my leave and starting my business. Naturally, people in the field have a range of opinions and it’s hard to develop towns well if you’re a researcher who doesn’t know the site. In the future, I want to play a role in creating better relationships as a third party who understands both the research and on-site perspectives. 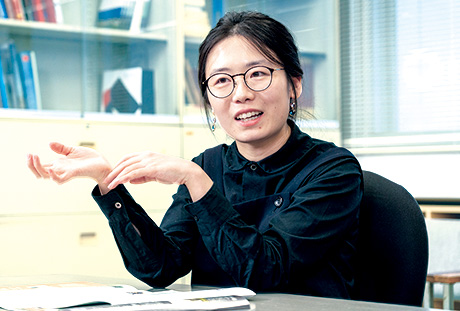 I came here from China because of my interest in architecture and history. My research theme is the urban housing complexes of my home, Qingdao. These were designed by a German and later built by Japanese for the Chinese. So the future of architectural culture connected to three countries intrigued me. I was able to persuade Fujita-sensei to let me do fieldwork there, and had great fun determining the design and structure characteristics and analyzing 3D data. Fujita-sensei’s stance is that he doesn’t assign you a research theme; you find it yourself. So it’s great that everyone in his lab has their own different theme. In the future, I want to expand my scope from Qingdao to do site surveys in other countries.