Controlling the interface between bio and nano 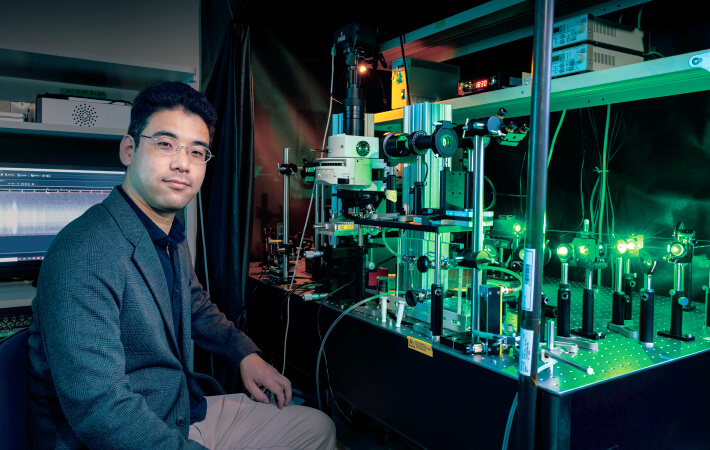 A peptide that can be synthesized by freely designing an amino acid sequence.

We followed the possibilities of future devices that can be achieved through his interface research, as well as his thoughts on interdisciplinary collaboration. 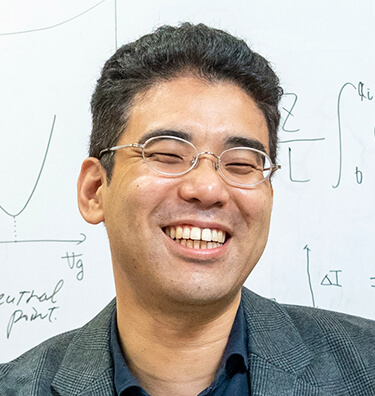 Discourse on the Method (written by Rene Descartes)

This book was recommended to me by a friend when I was in high school and was worried about studying for entrance exams. The section in Part III that discusses the need to walk confidently in one direction without wavering when lost in a forest was a real eye-opener. The book taught me a guiding principle to follow when forced to make difficult choices in life.

The structure and function of proteins that work in the body of organisms are composed of self-assembly that spontaneously forms tissues and patterns. Proteins with approximately 50 or fewer amino acids are called peptides. For many years, research has been conducted on the self-assembly of peptides.

Hayamizu uses an atomic force microscope to conduct nanoscale observation of the structure of peptides on the surface of inorganic solids. In addition, he has developed a method using Raman spectroscopy that identifies molecules by irradiating a laser and measuring scattered light. This has deepened current understanding of self-assembly.

Through collaborative research with the University of Washington, he discovered that peptides can be made to form regular self-assembled structures simply by dropping their aqueous solution onto graphene (one layer of graphite). He observed self-assembly into a nanowire structure even on the surface of single-layer graphene on a silicon substrate. Similar results were obtained on the surface of a single layer of molybdenum disulfide by changing a part of the amino acid sequence. It was observed that the structure of the nanomaterial was modulated by electrical interaction.

Hayamizu says that the idea of combining peptides, which are biomolecules, with two-dimensional nanomaterials such as graphene was born from his background and experience. As an undergraduate, he studied at the Department of Electrical, Electronics and Computer Engineering. But in graduate school, he majored in physics. After obtaining his doctorate, Hayamizu engaged in the synthesis of carbon nanotubes and device development at the National Institute of Advanced Industrial Science and Technology."I learned about peptides while gradually changing my field from electricity to physics and chemistry. I wanted to use the action of biomolecules as one mechanism of materials." (Hayamizu). 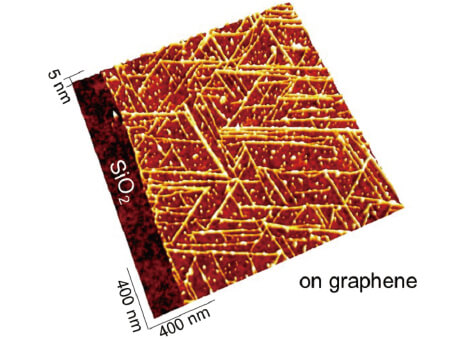 Image of peptides self-assembled on the graphene surface taken by an atomic force microscope. Peptides are aligned regularly along the arrangement of the underlying carbon atoms. It was also suggested that the peptide contains an aromatic amino acid called tyrosine and interacts specifically with the π electron of graphene.

Established peptides that can maintain a self-assembled structure under a biosensing condition by forming regular structures on two-dimensional nanomaterials. The peptides have high structural stability when voltage is applied, and even when under water or in an electrolyte solution.

Hayamizu describes himself as an "outsider" in interface research, a field in which Japan leads. His starting point in the field can be traced back to his time in graduate school.

In this research, you need the skills of both a producer and director

"At graduate school at the University of Tokyo, under the guidance of my supervisor Professor Hidefumi Akiyama, I worked on using semiconductor nanostructures to create new lasers. The essential point of a sophisticated laser is the extent to which it can reduce the unevenness of nanostructures. Greater uniformity in structures results in better performance of devices. I applied this idea to the [bio-nano] interface. The first issue I worked on was how to create a stable peptide structure."
Hayamizu pursued the stability and ordered structure of the bio-nano interface, themes that had not been emphasized in previous research. He also focused on observing what kinds of physical phenomena occur on the structure. By doing so, it is possible to observe still-unknown reactions on the surface of solids, such as the relationship between peptides and water or ions in solution, and the action when a voltage is applied. This is expected to advance understanding on the molecular level. Beyond precise interface design, it is possible to envision biosensors that operate completely differently from conventional mechanisms.
"In our lab, we often use the phrase 'imagine that you are a peptide.' In order to observe how peptides behave on the stage of a clean interface, it is necessary to properly set the characters and the stage."
On the interface, the molecules undergo self-assembly and are stable as a whole, reconciling with each other. The research group takes a bird's-eye view of the stage, repeating design and experiments while imagining what kind of scene will unfold. "Conducting this research is like fulfilling the roles of both a producer and director of a drama," explains Hayamizu with a laugh.

Research style learned from his time in graduate school

"When I was in the second grade of elementary school, my father took me stargazing," recalls Hayamizu. He says that the experience was the beginning of his interest in science and engineering, as well as his perspective and knowledge for overseeing research projects. During his time at the University of Washington, Hayamizu describes that he felt a difference in thinking when working with researchers from other fields. "At that time, I trained myself to apply the concepts of physics in terms of considering matters from a simple perspective. That led me to my current work as a researcher. However, it is said that, in the 21st century, new science will be born by interweaving complex knowledge on matters such as biology into physics. Currently, I am conducting research through my own methods of trial and error."
Living organisms are a treasure trove of knowledge and mechanisms. The fusion of biology and electronics is appealing because skillful utilization will make it possible to create new devices. As a researcher working in this dynamic field, Hayamizu has the motto: "While always being suspicious about whether you hold stereotypes, create a system for accepting new ideas."
"The relationships between people are important and are the true thrill of interdisciplinary collaboration. For example, I was given the opportunity to conduct research at the University of Washington thanks to mediation by Professor Sumio Iijima (Honorary Fellow of the National Institute of Advanced Industrial Science and Technology) during my time at AIST. Thanks to that relationship, we are still collaborating even now."
Furthermore, collaborative research with institutions such as the University of Manchester, RWTH Aachen University, and the Max Planck Institute has expanded because of what Hayamizu learned from Professor Akiyama while at graduate school and through his encounters at AIST. He is also engaging in collaborations with industry. One example is an ultrahigh-sensitivity odor biosensor currently being developed through the Cross-ministerial Strategic Innovation Promotion Program (SIP) operated by the Cabinet Office.
"When considering the increase in inbound tourists during the Olympic Games, companies have proposed the development of social infrastructure to replace quarantine dogs at airports. So we started the project and are working hard to meet their expectations."

Getting tenure at Tokyo Tech and repaying his gratitude to Japan

Hayamizu applied for the tenure track system at Tokyo Tech when he was at the University of Washington, and became a faculty member. "Around one year after starting research at the University of Washington, I was granted research funding as a Sakigake (PRESTO) researcher, which gave me the opportunity to return to Japan twice a year in order to present results. At that time, I had already learned about the tenure track system. Unfortunately, the Great East Japan Earthquake occurred when I returned to Japan."
Hayamizu returned to America the day after the earthquake. "I felt as if I was fleeing from Japan," he recalls. "In America, I lived a normal life—although heart-wrenching news flowed from Japan on a daily basis. I felt guilty about being in America, and I wanted to do what I could to help Japan. So, I applied for the tenure track system."
Committed to giving back to Japan, Hayamizu is endeavoring to develop unprecedented devices. "In the coming era, infectious diseases like COVID-19 will have a huge impact. The breadth and depth of research fields such as biosensors and the accompanying sense of responsibility will be immeasurable. I feel intense motivation to delve even deeper into the science of solids and liquids, and to further advance my efforts in pursuing new research styles for understanding at the molecular level." 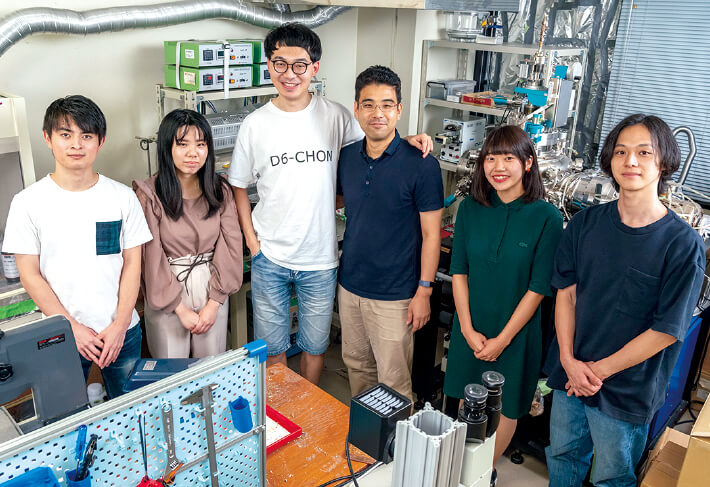 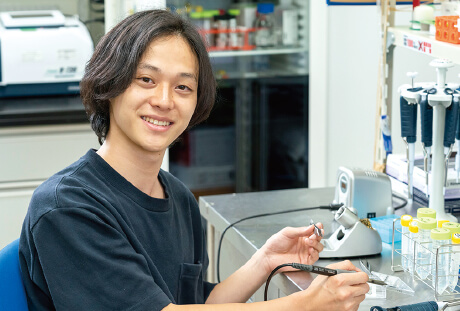 Continuing to deepen my knowledge and experience, I hope to challenge myself through research abroad

Based on research results by Hayamizu-sensei showing that peptides act as scaffolds which connect the surface of nanomaterials and biomolecules, I am working to develop odor sensors that mimic the mechanism by which humans perceive odors. The process of trial and error—for example, changing measurement conditions to check reproducibility—is difficult. But when you get results, it is very exciting. Also, this project involves collaboration with industry. The opportunity to give presentations at progress meetings is a valuable experience for me. I chose this lab because I was attracted to how Hayamizu-sensei truly enjoys his research. I hope to continue on to the doctoral program and deepen my research on more fundamental interfaces. In the future, I hope to challenge myself through research at a company or university abroad.

Guns, Germs, and Steel:
The Fates of Human Societies (Volumes One and Two)
Jared Diamond

Adsorption of molecules other than the target molecule also occurs on the surface of a biosensor. I am researching the utilization of self-assembling peptides to design interfaces which do not mistakenly adsorb other molecules. Since my background is in chemistry, I joined the lab from outside. Nevertheless, I feel that I am understood by Hayamizu-sensei, who enjoys physics research and having chats with students. The laboratory has a positive environment which fosters discussions among students. My dream is to develop convenient products which bring joy to people. I have already received a tentative job offer from a car manufacturer, where I will continue my work and research in manufacturing. I was fascinated by a car paint that achieves a beautiful blue hue through the use of structural colors.* I look forward to pursuing technology for creating products that evoke such emotions.
*A phenomenon that creates color depending on the wavelength of light and fine structure. Some examples are CDs and soap bubbles.