Professor Taro Hitosugi's work in all-solid-state batteries has gained attention as a path to the next generation of higher-safety, faster-recharge batteries. Using cutting-edge technology capable of "touching" individual atoms, Hitosugi's group is focusing on research that only his group can accomplish. We interviewed Hitosugi and two of his students.

Focusing on research that only we can accomplish! 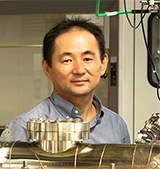 1994: Bachelor of Engineering, Department of Applied Chemistry, The University of Tokyo

1999: Doctor of Engineering, Department of Superconductivity, The University of Tokyo

2003: Assistant Professor, Department of Chemistry, The University of Tokyo

When we open the door to Hitosugi's office, we see open space leading to a window at the end of the room. Although most offices at universities are filled with bookshelves, large desks, and partitions, this room is separated into three areas: a counter table by the window, low chairs and cushions, a large, thin monitor and a round meeting table. It is a simple, but relaxing atmosphere.

"I want students to be relaxed and enjoy their time here," says Hitosugi with a smile. His favorite spot is the counter by the window from which he has a lovely view looking down a hill.

"Good ideas don't usually occur sitting at a desk. Good ideas usually occur while watching beautiful scenery, relaxing and chatting," explains Hitosugi. In this comfortable environment he often asks students, "In all the world, what is it that only you can accomplish?"

The work by his group in all-solid-state batteries has garnered much attention, with expectation to bring forth the next generation in batteries. Applying approaches that, in all the world, only they can accomplish, Hitosugi's group is advancing the cutting edge of their field.

Adoption on the horizon for all-solid-state batteries

Among commercially available secondary (i.e., rechargeable) batteries, lithium-ion batteries have the highest energy density, fast charging time, and long operating life. This has led to their wide adoption, from smartphones to automobiles, as well-balanced rechargeable batteries.

However, the wider commercialization of electric vehicles (EVs) requires lithium-ion batteries with a larger capacity (longer travel distance) and fast charging time (on the order of minutes). Such batteries will also allow us to use tablets and smartphones, which consume large amounts of energy, without having to carry mobile batteries.

Demand for lithium-ion batteries continues to expand. However, automobile, electronics, and chemical manufacturers are already moving forward in the development of new-generation secondary batteries. Because of this, all-solid-state batteries are being seen as the successor to the huge market currently dominated by lithium-ion batteries. At Tokyo Tech, Hitosugi and Professor Ryoji Kanno are collaborating with automobile manufacturers, advancing in their respective research towards commercialization. For Hitosugi's research, in particular, the keyword is "interface."

The structure of existing lithium-ion batteries involves a liquid electrolyte between positive and negative electrodes. Movement of lithium between the two electrodes leads to repeated charge and discharge. However, this structure increases the risk of leakage of the liquid electrolyte, which in turn can lead to ignition of the battery. In fact, fires have been caused by lithium-ion batteries in personal computers and smarphones.

"The all-solid-state battery was developed to replace the liquid electrolyte with a solid material that has a low risk of ignition. Its key features include safety, reduced charging time (a few seconds to a few minutes), and capability of long use. However, one of the challenges with this battery was that the interface resistance increased even when using materials with low electric resistance. Basic understanding of interface resistances has not yet been fully realized. We didn't know, for example, that interface resistances of solid-state batteries could be lower than that of lithium-ion batteries using liquid electrolytes. In this sense, we took a step forward into the unknown," describes Hitosugi.

Hitosugi succeeded in proving that very low resistances could be achieved at electrode and electrolyte interfaces. Shutting out impurities completely and using thin film technology opened up the understanding of all-solid-state batteries. Furthermore, he developed equipment that could quantitatively evaluate the battery properties. Many of the experiment devices used for this study were not commercial, general-purpose equipment, but were developed by his team. This is one of the unique characteristics of research conducted by Hitosugi's group.

"Making our own experimental apparatuses is not to cut costs," Hitosugi says with a laugh. "Commercial equipment only allows us to conduct research similar to what other researchers do. We are trying to do something special that we alone can accomplish. Therefore, it is natural for us to develop our own equipment."

This system made it possible to manufacture and evaluate thin-film all-solid-state batteries in an ultra-high vacuum; samples are never exposed to air. 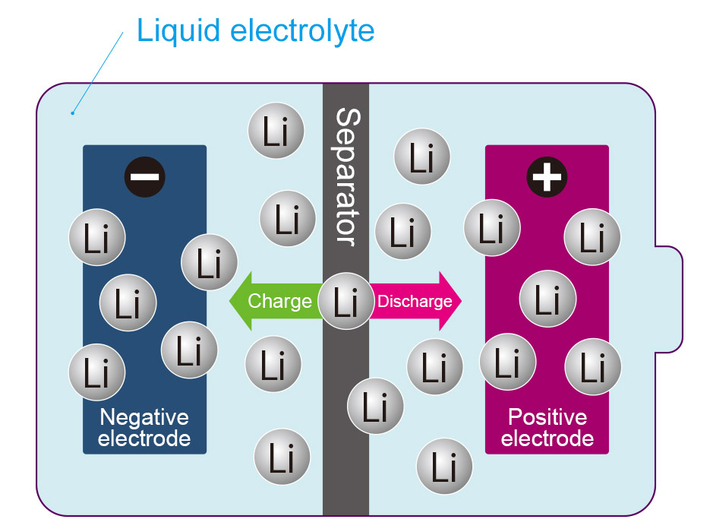 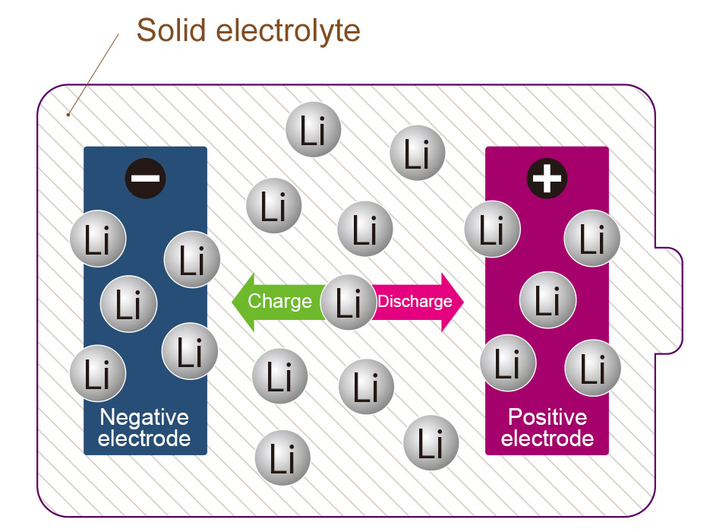 The developed thin-film solid-state batteries exhibited one-fifth to one-tenth the interface resistance of conventional batteries using liquid electrolytes. In collaboration with semiconductor and automobile manufacturers, they are now working toward the near-future commercialization of ultra-high-performance all-solid-state batteries. 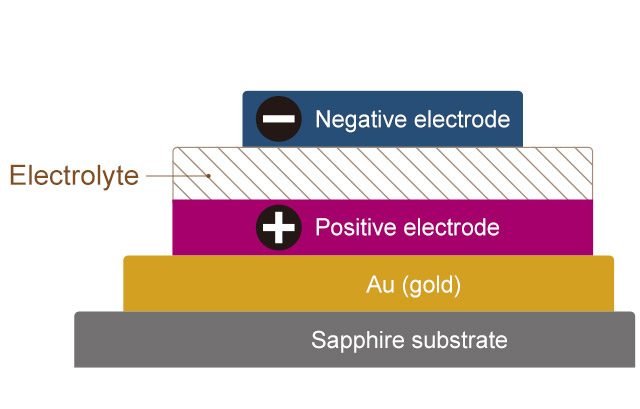 Besides all-solid-state batteries, the group also works on research and development of ultra-low power consumption memory. However, they do not focus solely on applied research. The foundation of atom engineering is basic research on atomic behaviors, interactions and properties of aggregations created by atomic binding. When Hitosugi was a university student, he observed atoms through a scanning tunneling microscope, noting, "They were lined up so beautifully on the surface of silicon; they looked like a picture. I was so moved by the power of nature."

"That experience stayed with me. Our research is to listen to the voice of nature, discover unknown properties of substances, and create novel functions and materials. Cutting-edge measurement technology makes it possible to fabricate products by confirming the individual characteristics of atoms. The development of the thin-film all-solid-state batteries mentioned earlier is also an extension of this. Using solid-state electrochemistry and our knowledge of solid physics, we evaluate physical properties. This is the strength and the originality of our group."

What Hitosugi is looking ahead to following the development of all-solid-state batteries and ultra-low power consumption memory is superconductors, which he worked on during his graduate school days. Superconductivity has the potential to change the future. Researchers around the world have sought room temperature superconductivity, and the Hitosugi group is now attempting to advance development through their unique approaches.

Photo 1 and 2 show the sputtering system to deposit thin films. Sputtering is a type of metal plating in which inactive gases are discharged at high voltage to deposit a film of the target substance onto the substrate. What is seen through the observation window is the discharge of inactive gas (argon gas).

Research by Hitosugi's group is a combination of basic and applied research, founded on solid-state electrochemistry and solid-state physics.

"I never thought about becoming a researcher when I was a graduate student. At Sony, I was first in charge of development of ultrahigh-density optical disks; and later I chose marketing and sales. We developed new technologies, which brought us new products to deliver to our customers. I was able to experience the processes of world-class companies. Looking back at that time, I was grateful to have had such a meaningful experience, which cultivated the ability to foresee the future beyond the technologies," states Hitosugi.

By rediscovering the value of research through his work at Sony, Hitosugi decided to return to academia and become a researcher when he was 31 years old. He explains, "I will do what I want to do most! This is my motto. At times I was at a loss because it was difficult after jumping into a new field. However, I know it is much better to try what I want to do than to regret not having tried. Moving to different fields allows you to create a firm base, built by accumulating experiences that are different for each person. This gives birth to a researcher's individuality."

He further states, "One of the many things I want to do now is to start an industrial revolution at the lab." For example, to find the best materials for electrodes and electrolytes in all-solid-state batteries, he made a "robot scientist" system with artificial intelligence that automatically produces and evaluates thin films. Setting raw ingredients, this system automatically fabricates thin films and measures the physical properties utilizing robot arms in a vacuum. What researchers then need to do is to check and analyze the results (Photos 3 and 4).

The 1st step to the industrial revolution at a laboratory! A robot scientist system that combines thin film production and evaluation devices Robot arm installed in the system operates automatically in the ultra-high vacuum. 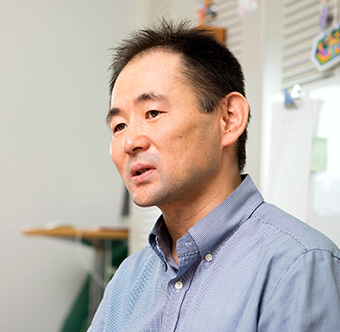 "Since Japan is experiencing a rapid change in its population structure with a low birthrate, the number of researchers specializing in science and engineering is also declining. In the midst of the fierce competition in science and technology fields, depending on manpower for research does not help a country like Japan when competing against countries with larger populations, like China," says Hitosugi.

Of course, he also places much emphasis on educating the next generation of researchers who will be the future torchbearers for science and technology in Japan.

Hitosugi explains, "I always encourage students to do what they want to do. It's natural to feel fear in doing something new. It requires courage. But I want students to develop the independence to overcome such difficulties. I want young people to be open-minded and not set limits on themselves. It is a waste for young people to decide what they can't do, because they have unlimited potential. Being free from such limitations, you will find what only you can accomplish."

As a researcher and educator, Hitosugi is always looking to the future of each student and the future of innovation in Japan that young people will bring. 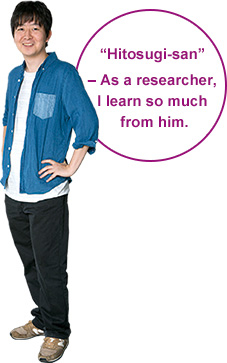 Mr. Hitosugi – I learn a lot from him as a researcher.

I am researching all-solid-state batteries. I hope to identify the origin of interface resistance utilizing promising positive materials other than lithium cobaltite.

The reason I joined Hitosugi-san's group was my interest in atoms, which combine to generate physical properties, and my hope to make discoveries that can change the world. I also like making things, so I was very happy to know that I would be developing my own experiment equipment too. Hitosugi-san is a very enthusiastic researcher; and by his policy, we address one another using informal titles. He insists on everyone being treated equally, which really appeals to me.

Hitosugi-san's lectures are always fun and interesting. His lectures motivate me to work on research that interests me without being put off by potential difficulties.

I really enjoy being here because I'm learning so much from him. 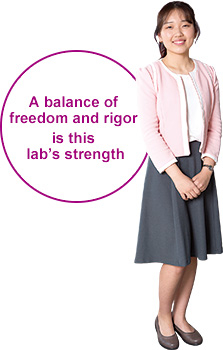 When I was in my third year as an undergraduate at Tokyo Tech, I attended a presentation given by Hitosugi-san about his life as a researcher. The presentation intrigued me greatly, so I decided to join his group. When I visited his office, I felt an open-mindedness and individuality that was different from other labs. After joining, in addition to the free and open atmosphere that I had seen when I first visited, I found that everyone in the group was very serious about research. I was sure that it would be a good place for me to grow.

I am looking forward to getting involved in the applied research that our group has been working on, research such as all-solid-state batteries and memory. This year, while I am still an undergraduate, I want to learn as much as I can about atom engineering through basic research on hydrides.

What Hitosugi-san teaches us students is easy to understand and shows empathy. He gives great advice that is very useful to our future.

My only disappointment is that I am the only female student here (laughs). I want more girls to be interested in this field.