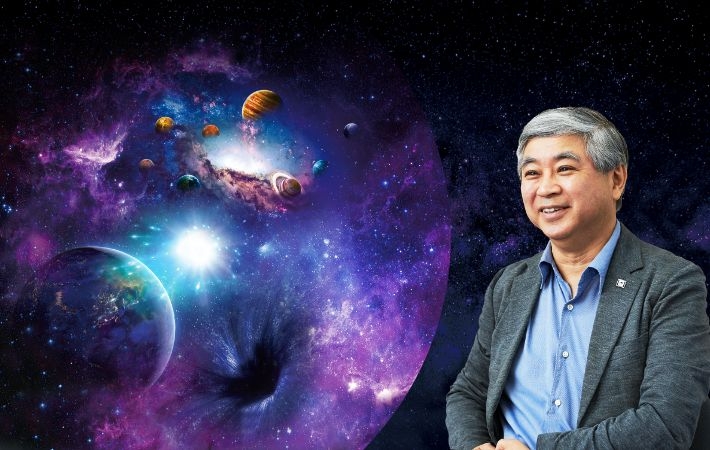 How was this universe of ours born? The key to unraveling this profound mystery is neutrinos, one of the elementary particles that make up matter. Professor Masahiro Kuze is working on international joint research with a state-of-the-art high-energy accelerator to prove CP violation[1] in neutrinos, which is a clue. Welcome to the dynamic world of GEEK, which is closing in on one second after the birth of the universe.

Research on the infinitesimal neutrino reveals the origin of the universe

Mankind has been pursuing the smallest unit of matter since ancient Greek times. It was once revealed that an atom, which is decomposed into electrons, protons, and neutrons, can be further decomposed, with protons and neutrons being composed of three smaller particles called quarks. Particle physics began by pursuing and elucidating such a minimum unit.

My research activities also began with my involvement in research with accelerators at a German research institute to elucidate the internal structure of protons. Since 2009, I have participated in the ATLAS experiment using the LHC (Large Hadron Collider, highest energy level in the world) at CERN (European Organization for Nuclear Research) in Switzerland, and contributed to the discovery of the Higgs boson, which is the origin of the mass of elementary particles. At the same time, I expanded my research to neutrino experiments, and am working on research to capture a phenomenon called "neutrino oscillation" in which neutrinos change their appearance as they fly, using the Super-Kamiokande detector in Gifu prefecture.

What is interesting about neutrino research is the dynamic approach to the birth mystery, the origin of the universe. The process of gradually revealing what happened in the first second after birth is, in a sense, like going back to the Big Bang in a time machine and repeating miniature experiments.

A child's mind drives towards the discovery of the century

"The events immediately after the Big Bang 13.8 billion years ago are gradually becoming clear. It's very dynamic research that closes in on the roots of our creation." 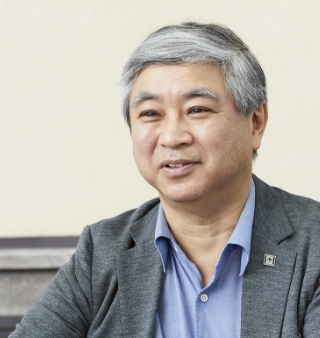 In 1990, completed a doctoral degree program in the Department of Physics at the School of Science, the University of Tokyo. 2016: Became a professor at the School of Science, Tokyo Tech. Doctor of Science (University of Tokyo). He is involved in the ATLAS experiment of CERN (European Organization for Nuclear Research), the T2K experiment by Japan Proton Accelerator Research Complex (J-PARC) and Super-Kamiokande, and the Hyper-Kamiokande project.

Since elementary particle research is very expensive, many countries pool funding to conduct international joint research. People of different ages and nationalities gather together with the one goal of unraveling the mysteries of the universe. This makes the joy of seeing totally original data priceless.

In retrospect, my roots are in the space-themed television show I saw in high school. Learning about the possibility of extraterrestrial life and about Voyager 1, which has records containing information on humankind, I became very interested in the universe. Seeing researchers forgetting to eat and sleep and immersing themselves in experiments, they all seem to retain the pure curiosity they had as a child. With that curiosity, we see eye to eye even if our circumstances are different, and we can overcome failed experiments. Cherishing pure curiosity, I would like to continue to close in on the mysteries of the universe.

What happened in the first second after the birth of the universe? 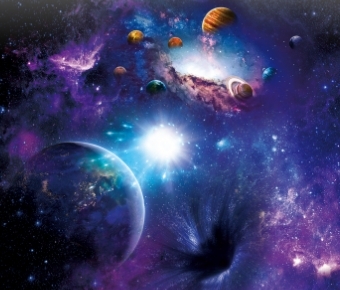 13.8 billion years ago, shortly after the birth of the universe through the Big Bang, matter and antimatter were born. Theoretically, the two were supposed to cause annihilation and disappear, but the matter apparently remained due to a slight asymmetry caused by the interaction (CP violation), and formed the present universe.

How do you measure the mass of neutrinos?

The Standard Model of particle physics has postulated that the mass of a neutrino is "0", but research at Super-Kamiokande has found that it has a mass. We observed atmospheric neutrinos pouring down from space, and obtained evidence by comparing the numbers from the other side of the Earth with the numbers from above.

Space observations such as the rotation speed of galaxies and the gravitational lens effect make it clear that the amount of mass far exceeds the mass of matter visible as celestial bodies in the universe, and dark matter is presumably responsible for that mass. It is an important substance that occupies about 27% of the universe, but it cannot be explained by the particles currently known in particle physics. Its identity is still unknown.

About 66 billion neutrinos arriving from the sun pass through the tip of your finger in one second. Despite that, only about 20 can currently be detected in a day. 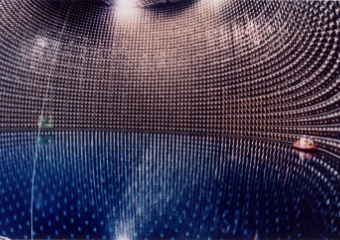 In the world of particle physics, there is a body of theory called the Standard Model. It describes how the electromagnetic force, the strong force, and the weak force (the three forces acting between elementary particles) interact with each other, and one mathematical formula can explain most of the physical phenomena related to elementary particles.

However, the Standard Model is not perfect, and there are some phenomena which it cannot explain. One of them is the existence of neutrino mass. In fact, neutrinos in the Standard Model have no mass at all. However, the discovery of "neutrino oscillations" (changing neutrino type over time) has confirmed that it has a small mass.

Kuze explains: "These 'flaws' in the Standard Model are stepping stones to establish a larger body of theory. The mass of neutrinos is currently the only proven 'flaw'. This is the reason why researchers around the world are paying attention to neutrinos and actively conducting international joint research."

One of them is the Japan-led T2K experiment using the Super-Kamiokande detector in the Kamioka mine in Hida City (Gifu Prefecture), and it is a world leader among the many joint research projects.

At J-PARC (High Intensity Proton Accelerator Facility) in Tokai Village, Ibaraki Prefecture, the goal is to shoot an artificially generated neutrino beam into Super-Kamiokande about 300 km away, and measure the neutrino oscillations in detail. The accelerator can generate both neutrinos and the antineutrino beams that are opposite each other. If the two neutrino oscillations are measured and a difference in behavior appears, it is evidence that "CP violation" has occurred.

"The T2K experiment is progressing smoothly, and in 2020, the range of values that the CP phase angle[2] (determines the magnitude of the difference in behavior between neutrinos and antineutrinos) can take was narrowed down to nearly half. This let us show CP violation with 95% confidence." (Kuze)

The world of elementary particles seen from the Standard Model 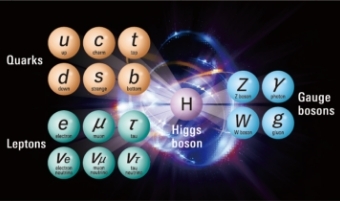 By constructing a facility with an effective volume about 10 times that of Super-Kamiokande and strengthening the beam from Tokai Village, we aim to acquire data about 20 times faster. Approximately 500 researchers from 20 countries are scheduled to participate in experiments using Hyper-Kamiokande, and Japan is truly a mecca for elementary particle research.

The discovery of the century is near. Current status of the T2K experiment

Taking advantage of the nature of neutrinos which penetrate even the Earth, T2K is a profound experiment in which neutrinos generated by the accelerator in Tokai Village are beamed to Super-Kamiokande in Hida City and detected there.

The CP violation of quarks found to date is small and cannot explain the amount of matter in the universe. However, the T2K experiment suggests that the CP symmetry of neutrinos may be severely violated. The measurement of CP phase angle will likely be a clue to unraveling the fundamental mysteries of the universe. 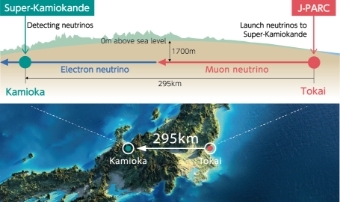 Kuze explains why Japan is leading the way in particle physics. "The existence of Kamiokande, the unique experimental facility in the world, is significant. Kamiokande originated from Physics Nobel Prize winner Dr. Masatoshi Koshiba's 'Unusual Idea'. It has nurtured many researchers and made Japan a major particle research nation."

Neutrinos are so difficult to detect that they are called "ghost particles". There are multiple methods using nuclear reactors and Antarctic ice, but Kamiokande adopted the unique idea of creating a huge space in a deep underground mine site with little cosmic ray noise and installing a huge tank filled with pure water[3], which is the cheapest available. This "unusual idea" actually bolstered Japan's current breakthrough. "Because the difficulty level is very high, an individual's unusual idea can work out. That is the real thrill of neutrino research." (Kuze)

Large-scale research using accelerators and Hyper-Kamiokande is called big science, and many researchers from all over the world participate. Researchers divide up roles such as development of observation equipment and data analysis, accumulate data over decades, and combine it to produce results.

Although students are only involved in one part of the project, Professor Kuze says that the significance of being involved in big science is great. "Under the big idea of closing in on the mysteries of the universe, it is an invaluable experience for everyone to work together toward this one goal. Also, discussing these ideas with other researchers provides you with a broader perspective."

The heritage of Japanese particle physics has been passed down through time. The students who gather in the Kuze Laboratory are also enthusiastic about their daily research. Indeed, time travel to one second after the birth of the universe is coming ever closer.

Construction of the next-generation Hyper-Kamiokande

Hyper-Kamiokande is currently under construction with the aim of starting experiments in 2027. Students in Kuze Laboratory are in charge of developing electronic circuits that process the signals of optical sensors. Their design is proceeding with consideration to failure prevention, stability, energy efficiency, and other aspects, while facing the challenge of being submerged in pure water. 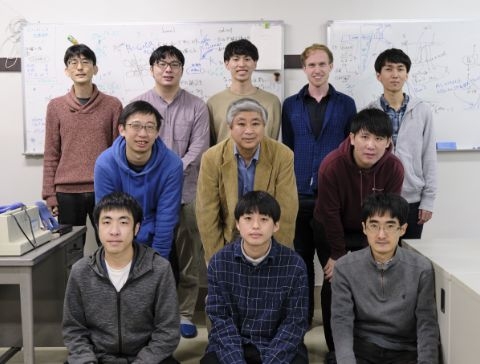 [3] Pure water : Since faint light must be observed to find neutrinos, pure water with as little dirt and impurities as possible is required. Kamioka in Gifu Prefecture is capable of providing abundant water, which is one of the reasons why it was selected as the location for Kamiokande.