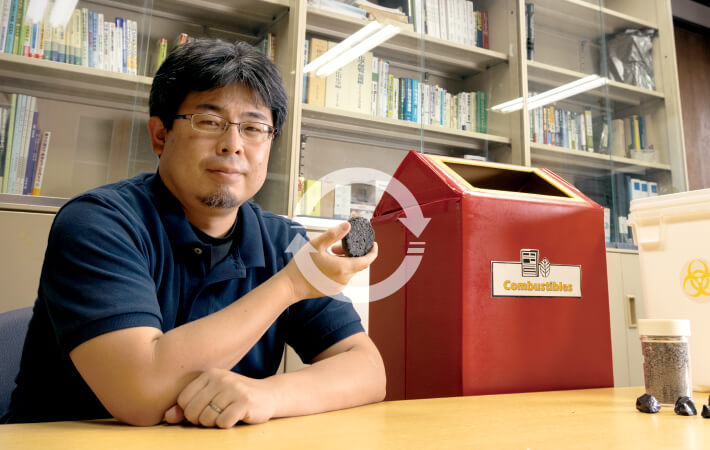 The future of waste recycling, as considered through both the sciences and humanities

The modern world is filled with things, and waste treatment has become a social problem.
Associate Professor Fumitake Takahashi is researching the possibilities and risks in recycling - an indispensable task as we move towards a recycling-based society.
Why is it that recycling has been slow to progress? By focusing on the issue from the viewpoints of both science and society, Takahashi's research is providing unique insight into solving waste recycling. 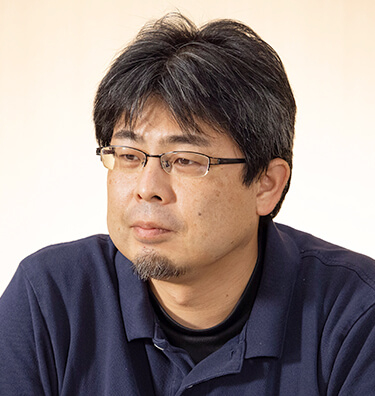 Doctor of Engineering, Associate Professor, Department of Transdisciplinary Science and Engineering, School of Environment and Society

Tokeigaku nyumon (Kiso tokeigaku I) [Introduction to statistics (Basic statistics I)] (edited by Statistics Section, Department of Social Sciences, College of Arts and Sciences, the University of Tokyo)

It is hard to predict how much of what you learn in university will be useful in life. Statistics, however, is a basic element that will be useful in any case of thinking. This book will be advantageous to your career building and bring great returns for your effort.

Wastes contain hazardous materials such as heavy metals, and toxic elements must be immobilized before recycling. However, despite advances in the development of immobilization technology, recycling has not progressed much. Takahashi took a different path and decided to pursue adding value to motivate people to use recycled products.

His first attempt was when he was at Kyushu University. When wastes are melted at temperatures above 1,200 degrees, a glass-like substance is produced called slag; and the slag that is produced when smelting and refining steel contains fluoride. To solidify this fluoride, "What occurred to me was toothpaste containing fluoride. When fluoride is added to hydroxyapatite,*1 it becomes fluorapatite*2 and prevents tooth decay. I applied that principle to slag." (Takahashi)

Takahashi synthesized fluorapatite on the surface of the slag, imitating a tooth surface, and attempted to endow the slag with an environmental remediation function owing to the activity of microorganisms that attach themselves to it. He says that this is when he started his research into adding value.

*1:
A calcium phosphate that is the principal component of teeth and bones.
*2:
A crystal structure that has low solubility in acid. This reinforces the enamel and makes tooth decay less likely.

Later at Tokyo Tech, he began research on recycling coal fly ash, with an international student from China.

Coal-fired power is the main source of electricity in China, and the resulting coal fly ash is causing pollution. Further, much of where coal can be mined is arid, and desertification and land degradation are advancing. If coal fly ash could be turned into a material that retains water in soil, it could be recycled while helping to solve an environmental problem. At the core is the idea to take something and to create a cycle for it there, where it already is. This concept of developing technology to add value has led him to other solutions, such as porous geopolymeric adsorbents that retain water, and materials that adsorb heavy metals and other hazardous materials. 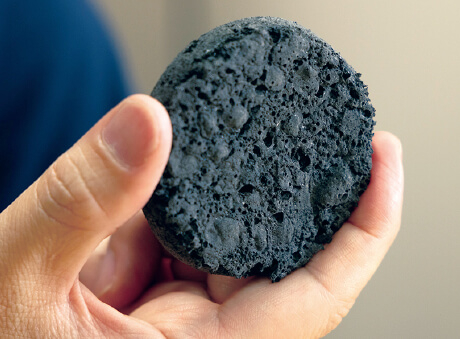 The psychological burden of removing a bottle cap is 1.8 yen

Immobilizing toxic elements from and adding value to recycled material are scientific approaches. Takahashi does not stop there, as he emphasizes the need for a social science perspective of human behavior and on negative psychological impressions about recycling. What is the primary psychological factor holding back recycling? He focuses on the idea of psychological burden. He is quantifying this psychological burden through his research and converting it into monetary value.

"Environmental economics has a method of measuring psychological burden. It's called 'willingness to pay,' and it can be converted into a monetary value by asking 'How much would you pay to have someone else do what you feel is a burden?' But I felt that this price does not adequately portray the reality when derived from the principle of supply and demand, and I searched for a different way to fairly compare psychological burdens."

There are two steps to this method. First, psychological burdens are compared, and the data is converted to numerical values. For example, asking 100 people which is more of a burden, to remove the caps from 100 plastic bottles or to make curry, will produce data on selectivity. Then applying statistical processing will convert this to a value. 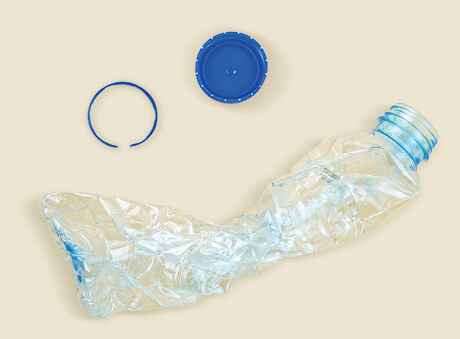 "The psychological burden of removing bottle caps is 1.8 yen, and of rinsing the bottles is 8.9 yen," says Takahashi. Plastic bottle recycling requires four actions of people: removing the cap, removing the label, rinsing, and crushing. This means that collected bottles could be in any of the 16 states arising from cap removed or not, label removed or not, rinsed or not, and crushed or not. After Takahashi's arrival at Tokyo Tech, he and his students examined approximately 56,400 plastic bottles and made an interesting discovery. The rates of label removal and rinsing were low among people who did not remove the caps, but the rates of subsequent actions were high among people who did remove the caps.

"My interpretation is that people can be sifted apart by a psychological burden of 1.8 yen. For example, bottles placed in a collection box located at a major supermarket do not have caps or labels and are rinsed. They are high in quality. The psychological burden of taking the bottles to a supermarket is 5 to 6 yen when appraised using willingness to pay, but according to my method, it is 40 yen. Since burdens are being compared with one another, I think it is also capturing the psychological burden that is being felt subconsciously. I think we can say that recycling is important to people who can rise above this 40 yen."

Takahashi's research as a student was in waste liquid treatment using supercritical water, water at high temperatures and pressures. Though he sought employment at the National Institute for Environmental Studies, he was forced to change his research theme. "When I look back on it now, I think this was a very positive development," laughs Takahashi.

At the National Institute for Environmental Studies, he began research on finding the amount of mercury released into the atmosphere, and concurrently, research on recycling molten slag: this was his first step into recycling research. He worked on a study to mix slag into asphalt for use as roadbed material. After moving to Kyushu University, under Professor Takayuki Shimaoka, he studied landfills and the properties of ash and researched ways to use ash as an ingredient of cement. The research on mercury is ongoing, and following the amount released into the atmosphere, what is being studied now is the environmental risk following safe burial by stratum disposal.

"The common path in research is to master one thing. As for recycling, however, we need multifaceted viewpoints and thinking, including value addition, psychological motivation, risk analysis, and safety of landfills, and I came to consciously take a multifaceted approach. I think it helped that I had changed my research theme after obtaining my doctorate. That experience lowered the psychological hurdle for me. Anyone who's specializing in a field and laboring in it realizes how hard it is for another to get into that field."

Design can empower the world to improve 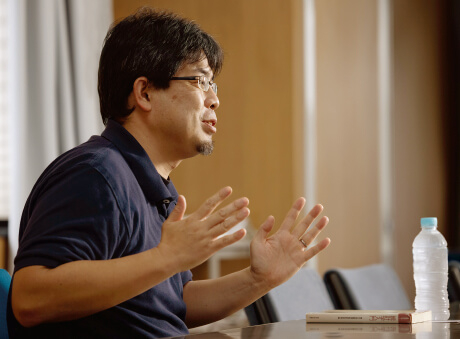 "When I was at Kyushu University, I happened to glance at the laboratory's waste receptacles, and the contents were not sorted well."

His first idea was that this was caused by municipalities having different collection systems. However, studying it led to the conclusion that, in reality, collection systems did not have much effect on wrong matter being mixed in. Takahashi now has a laboratory at Tokyo Tech and is including more and more into his vision, spanning more fields. His research has developed into applying the quantification of psychological burden to measure design quality.

"I believe that changing the design of waste receptacles can improve sorting, and that there must be a better design for sorting charts, as well. But I would like to collaborate with governments or private companies in such proposals that would be implemented in communities, and right now, we are sowing seeds to that end."

Students are also tasked with exercises such as considering waste receptacle designs that promote the removal of bottle caps and prevent the inclusion of other matter.

"Before COVID-19, we had set some up at Ookayama Campus as experiments on collection. One had a lane attached to the waste receptacle, and when a cap was rolled into it, it would provide a bit of fortune-telling. Another had a basketball net for caps to be thrown into. When we added such "play" inviting people be part of the action, the cap removal rate became 100%. The students kept coming up with ideas to get past the 1.8 yen of psychological burden, and I was impressed by the power of youth."

Takahashi smiles warmly. His teaching style values the autonomy of students. He watches over the research of students interested in recycling, as well as those interested in design and IT, while still maintaining focus on the expansion of his own research. 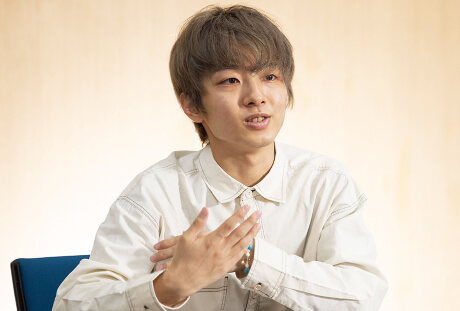 Bunsan bunseki no hanashi [About analysis of variance] (by Sadao Ishimura)

I am researching the design of slides used in presentations. Even if the content stays the same, how does comprehension change with a different layout or when a diagram is moved to a different location? What sort of design do people tend to like? I use surveys to collect and analyze responses and draw conclusions. I chose this laboratory because I was interested in Takahashi-sensei’s work of quantifying how people feel and because I was drawn to him as a person who uses clear English to present interesting ideas. Slides are used in companies and in research, so I feel that studying them will prove useful. I would like to make use of my outcomes and my English skills in my future career. 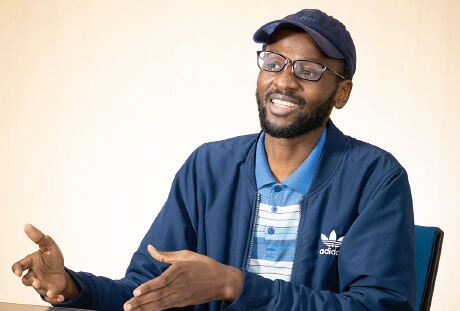 The international quality of Takahashi Lab appealed to me: it had many international students, and it was possible to interact with others in English. My homeland, Zimbabwe, has a serious waste problem, and I chose to study recycling because I want to solve it. My research is on making fuel by heat-treating tires and biomass. I am studying the basics now, but what we must deal with is massive, and I am eager to continue on to applied research. Takahashi-sensei values what each student wants to do and supports us in what we want to research. This policy of his is helping me achieve outcomes, and I’d like to write papers and further my research.