Technology to improve food production has been fundamental in increasing the global population from 1.6 billion in 1900 to 7.4 billion today. Fertilizers made from ammonia-derived nitrogen compounds in particular have been irreplaceable in boosting agriculture. Contributing to and building on the success of Fritz Haber and Carl Bosch1, two German chemists who paved the way for the industrial ammonia synthesis and key studies into catalyst technology, scientists at Tokyo Tech continue to make progress in innovative ammonia synthesis.

Attempts to synthesize ammonia began over a century ago

Chemical fertilizers necessary for agricultural mass production contain nitrogen, an essential nutrient for plant growth. A major source of this lifeline is ammonia, a compound produced naturally by bacteria through the synthesis of atmospheric nitrogen. With significant concern at the end of the 19th century in Europe that the world's increasing population might lead to a food crisis, scientists sought to synthesize ammonia for use in fertilizer.

Perhaps best known among these pioneers were Walther Nernst (1864-1941) and Fritz Haber (1868-1934). While both had the same goal, significant differences in the data reported by the chemists emerged. Nernst argued that industrialization would be impractical if a pressure of 50 atm at 1,000 degrees Celsius would only produce 0.003 percent ammonia. He criticized Haber for claiming that 1 atm at 1,020 degrees would yield 0.01 percent ammonia. This disagreement prompted Haber to redouble his efforts. He was joined in his quest by Setsuro Tamaru (1879-1944), a Japanese scientist who provided the research team with highly accurate measurements. Tamaru would make significant contributions to Tokyo Tech when the Institute was elevated to a degree-conferring university. He also became the first director of the Tokyo Tech Library. 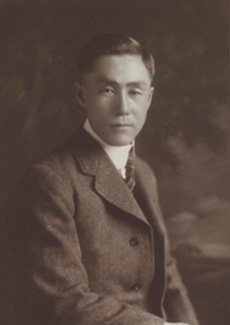 After graduating from the Department of Chemistry, Faculty of Science at Tokyo Imperial University (now University of Tokyo) in 1904, Tamaru traveled to Germany to join Nernst's laboratory, and then moved to the Karlsruhe Institute of Technology to study under Haber. According to Haber, Tamaru "worked like hell." He tirelessly measured the heat produced by ammonia formation and the specific heat of reactant gas with great accuracy, and made great contributions to the calculation of equilibrium constants under a wide range of pressure and temperature conditions. The results revealed that Nernst, who had accused Haber of miscalculations, was in fact mistaken himself. This was strong proof for the feasibility of ammonia synthesis.

Industrialization through the discovery of an iron catalyst 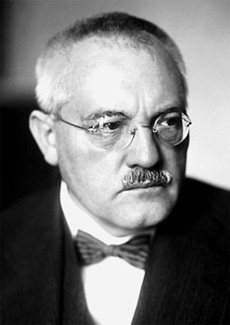 After the advances made by Haber, it was German chemical company BASF and Carl Bosch who accelerated the industrial synthesis of ammonia. Bosch was in charge of the design and development of the required high pressure reaction system equipment, while Alwin Mittasch, another German chemist, headed the development of the catalysts2 that were key to industrial production. The two conducted more than 10,000 experiments before succeeding in the development of an iron catalyst that was both relatively inexpensive and resistant to high pressure and temperature. This made possible the operation of plants in 1913 with annual ammonia production capacities of 6,500 tons.

The search for a superior catalyst continued, with the mechanism of reaction only being clarified around 1940. Between 1952 and 1953, however, Juro Horiuchi (1901-1979) and other researchers applied stoichiometry3 to ammonia synthesis experiments at Hokkaido University's Research Institute for Catalysis. Their work revealed the possibility that nitrogen-hydrogen formation was a rate-determining step4, causing a great deal of excitement throughout the world.

At the same time, Atsumu Ozaki from Tokyo Tech was working with Hugh Taylor, a well-known catalyst expert at Princeton University. Ozaki and Taylor tried to clarify the mechanism of ammonia synthesis from the effect of deuterium isotopes5. They compared reaction speed using nitrogen (N2) and hydrogen (H2), and nitrogen (N2) and deuterium (D2) to clarify the rate-determining step. They found the latter to be two to three times faster than the former, which undermined the ideas put forth by Horiuchi's research group. However, the idea of the time that nitrogen (N2) was adsorbed on the surface of the iron catalyst could not explain the results obtained from the deuterium isotope experiments. Continuing his work, Ozaki speculated that the surface of the iron catalyst was covered with adsorbed NH groups.

Ruthenium catalyst — the great discovery of the century 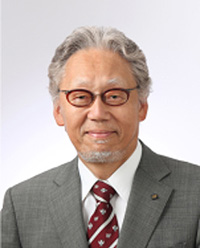 Following Ozaki's return to Japan, Ken-ichi Aika, then a first-year master's student, joined Ozaki's lab. The two men started working on a new catalyst together. After recombining catalyst ingredients, investigating metallic elements that promote activity, and experimenting with nickel and other transition metal elements, they found ruthenium6 to produce the most favorable results. They acquired a patent for the catalyst in June of 1970, and published papers on their research findings in 1971 and 1972. Ruthenium rapidly attracted attention around the world as the new ammonia synthesis catalyst. Some twenty years later in 1992, after improvements were achieved by British Petroleum, the American company Kellogg applied this technology to the commercial synthesis of ammonia. Today, this method is employed and saving energy at seven manufacturing facilities around the world. 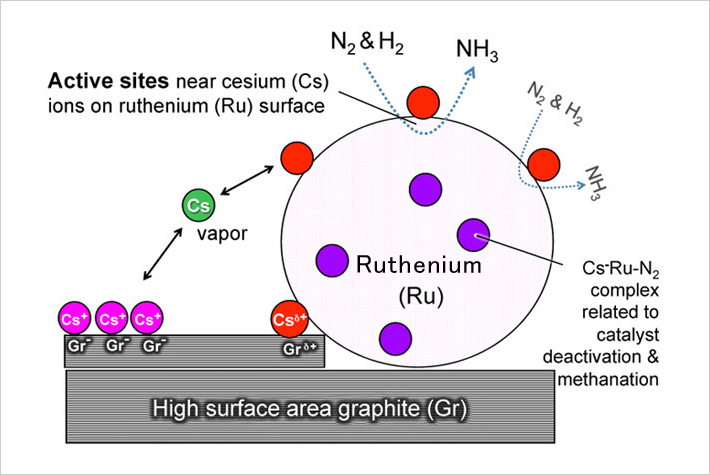 Into the 21st century — The next-generation ruthenium catalyst

"Despite ammonia synthesis being a major theme in catalyst research, rumor has it that research on the topic has been cursed. So many have failed that few are interested in working on it." These were the words of catalysis specialist Professor Michikazu Hara when materials expert Professor Hideo Hosono invited him to search for a new catalyst to replace the iron and ruthenium catalysts. Hosono had been fascinated by ammonia synthesis since he was a student. He told Hara that he was confident they would succeed, and they embarked on joint research. They bonded fine ruthenium particles utilizing C12A77, a type of cement, and succeeded in developing a new catalyst that revealed activity one order higher than that of the existing ruthenium one. Ru/C12A7 was the next-generation ammonia synthesis catalyst that the duo had been looking for.

The discoveries of Hosono and Hara have undoubtedly advanced the potential for ammonia to provide a stable supply of fertilizer for food production. Recently, however, ammonia has also been identified as a possible hydrogen carrier that can be applied to the realization of a hydrogen economy. The high expectations from both the food production and energy sectors serve as a strong impetus for continued Tokyo Tech research into optimized synthesis processes.

The slowest step of a chemical reaction that determines the speed at which the overall reaction proceeds.

Variants of a chemical element that differ in neutron number. The isotope effect is the variation in the physical properties and reactivity of isotopes or isotopic ratios, which is caused by isotopes of a given element making up substances and compounds.

A rare platinum-group metal also classified as a precious metal. Ruthenium-osmium alloys are used for fountain pen nibs. Often used as a catalyst to hydrogenate unsaturated bonds in organic chemistry.

A crystal structure with a cage-like skeleton that is 0.5-nm in diameter. In 2003, Hosono and his team discovered that inserting electrons in the cages forms stable electrides (ionic compounds in which electrons serve as anions). It was clarified that a C12A7 electride conducts electricity as a metal, and is superconductive at low temperatures.