Here are some of the highlights of 2014 at Tokyo Tech. The Tokyo Tech community offers you our best wishes for the New Year. 2015 promises to be another exciting year and your continued support is greatly appreciated.

As a part of Tokyo Tech's education reform efforts, the Tokyo Tech International Symposium on Education Reform was held on March 14 with the participation of approximately 450 people. In the symposium, keynote talks were given by Professor W. Eric L. Grimson, Chancellor for Academic Advancement at the Massachusetts Institute of Technology (MIT), and by Professor Ronald Gronsky, Special Faculty Assistant to the Chancellor for International Relations at the University of California, Berkeley (UCB). A lively panel discussion on the Future of World-Class Science and Engineering Higher Education Systems followed the keynote talks. The symposium shared anew the idea that cultivating next-generation leaders is not a task for individual universities, but one to be shared by the global academic community as a whole.

Undergraduate and graduate schools to be combined

At a press conference held on June 27, President Yoshinao Mishima and Executive Vice President for Education and International Affairs Toshio Maruyama announced the introduction of unified undergraduate and graduate "Schools." They also announced other aspects of Tokyo Tech's education reform such as new curricula for expertise, major courses conducted in English in the master's and doctoral degree programs, and deeper pursuit of liberal arts along with the implementation of an academic quarter system and achievement-based assessment.

Tokyo Tech was selected as a "Type A" university for the Top Global University Project by the Ministry of Education, Culture, Sports, Science and Technology (MEXT). The project aims to enhance Japan's research and competitiveness in higher education by supporting university reforms which promote internationalization and cooperation with top overseas universities.

In line with the Institute's goal of becoming one of the world's top 10 research universities by 2030, Tokyo Tech will revitalize its education system to further promote internationalization. Faculty and staff will work swiftly and collectively to implement administrative reforms in order to achieve this goal.

The "FACES" series tells the stories of Tokyo Tech researchers and their cutting-edge research through interviews in simple terms with photographs and graphics. More than 10 researchers were featured, including candidates for the Nobel Prize, Honorary Professor Yoshinori Ohsumi and Professor Hideo Hosono. We encourage you to enjoy these fascinating stories.

To introduce some of the exciting research taking place at Tokyo Tech, the Institute is holding a series of lectures titled the "Tokyo Tech Inspiring Lecture Series." The first event was held at Kuramae Hall, Tokyo Tech Front, at the Ookayama Campus on July 16. The title of the event was "Origins: Earth and Life" and four world-renowned scientists connected to Tokyo Tech's Earth-Life Science Institute (ELSI) spoke about their research on the origins and evolution of the earth and life. 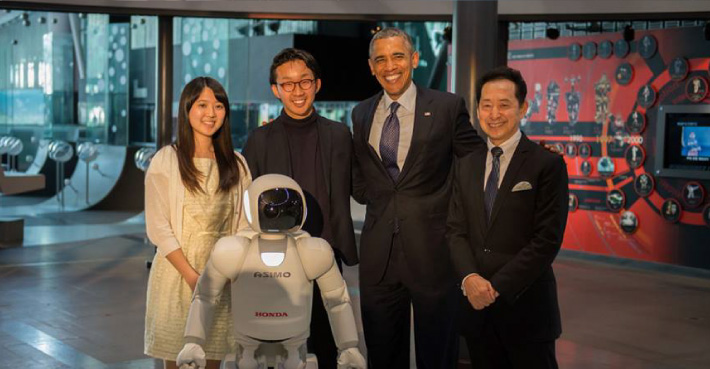 US President Barack Obama took part in a dialogue on science and technology with young people at the National Museum of Emerging Science and Innovation (Miraikan) on April 24. Two Tokyo Tech 4th-year undergraduate students and five students from Tokyo Tech High School of Science and Technology participated in the event.