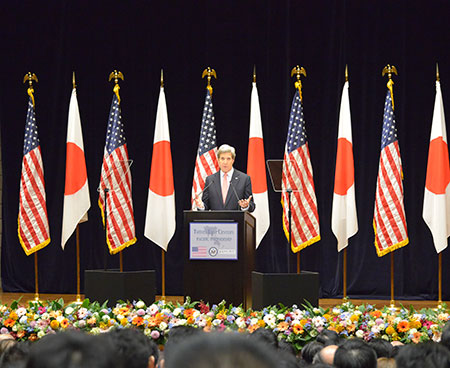 On Monday, April 15, 2013, then-President Mishima welcomed United States Secretary of State John Kerry to Tokyo Institute of Technology. In addition to the three hundred Tokyo Tech students, faculty and administrative staff members, parliamentarians, Japanese government officials, business leaders, Japanese and international media, and representatives from the U.S. Department of State and the U.S. Embassy attended the major policy speech. then-President Mishima hoped this encounter with the US Secretary of State would have a positive influence on the students' futures.

The Secretary of State spoke of the US vision for the Asia Pacific Region and the "Pacific Dream," a dream embodying unprecedented security, economic and social cooperation. Emphasizing the US commitment to Japan and the region, Secretary Kerry stressed the importance of moving forward and organizing around the four principles of Strong Growth, Fair Growth, Smart Growth and Just Growth to make this vision a reality.

Secretary Kerry commented on Tokyo Institute of Technology's strengths several times throughout the speech. He encouraged partners in the region to follow the example of Tokyo Tech students and think creatively and innovatively in order to find peaceful and diplomatic solutions to the region's challenges. He drew attention to the Environmental Energy Innovation Building and its extraordinary achievements in energy creation and use. Finally, he urged Tokyo Tech students to follow in then-President Mishima's steps and to "reverse the troubling trend of fewer Japanese students studying in the US." "Only by immersing ourselves in each other's languages and cultures can we truly understand each other and build partnerships."

In concluding, Secretary Kerry shared a story of a concrete partnership that sprang up between the people of Greensburg, Kansas, which was destroyed by a tornado in 2007, and the people of Tohoku, who were devastated by the Great East Japan Earthquake and tsunami in 2011. Community leaders from each town formed a group called Kizuna and are sharing ways to rebuild better and smarter communities. "Though our journey may sometimes seem a million miles long...it is fully within our power to choose how we take our next step."

Streaming video in English on the United States Embassy in Japan's website:
http://japan.usembassy.gov/streamvideo.html