On October 21 and 22, 2017, high school students from across Japan joined internationally acclaimed scientists at Tokyo Tech for the Molecular Frontiers Symposium (MFS). Aimed to raise public appreciation of molecular science and to engage the youth who will lead the breakthroughs of tomorrow, the event was hosted by Tokyo Tech in collaboration with the Molecular Frontiers Foundation1.

Eighty-five high school students paticipated in the event, which was held in Japan for the second time. Departing from the conventional lecture-based format of the MFS, the symposium at Tokyo Tech featured not only lectures but also laboratory workshops led by Tokyo Tech's Nobel laureates and group work sessions with leading scientists from abroad.

In keeping with Tokyo Tech's student-centered model of education, organizers were keen to involve students in the planning and implementation of the symposium. Twenty-eight Tokyo Tech students — including international students — worked with faculty, staff, and the invited scientists to plan the sessions for the event's second day. In addition, the Tokyo Tech students designed homework assignments for the high school students to complete in advance of the symposium. This preparation facilitated the high school students' comprehension of the participating scientists' research and set the stage for their engagement on questions related to "Science for Tomorrow."

"Do something you love and believe in."

The first day of the MFS featured a series of lectures by five of the scientists. In keeping with MFS tradition, the lectures and Q&A were conducted in English. Explaining their research in ways that were easy for laypersons to understand, the scientists shared the questions that inspired their investigations, told of how they overcame challenges, and pointed out questions still remaining. 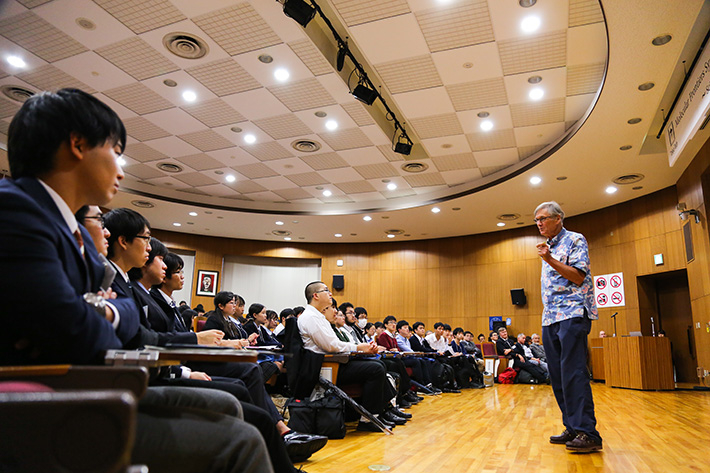 Despite the highly advanced and specialized nature of the lecture content, the high school students unhesitatingly asked questions and shared their own ideas in the Q&A sessions following each lecture.

The Swedish-style coffee break, or fika, included during the lecture program, offered a relaxed atmosphere for attendees to engage in informal conversation with the scientists and with one another.

One word employed by all five scientists was "curiosity." It was their unparalleled curiosity and the enthusiasm with which they spoke of their research that engaged everyone, from the high school students to the numerous Tokyo Tech students and faculty members, who attended. 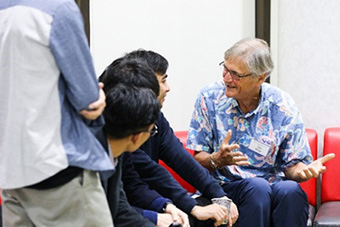 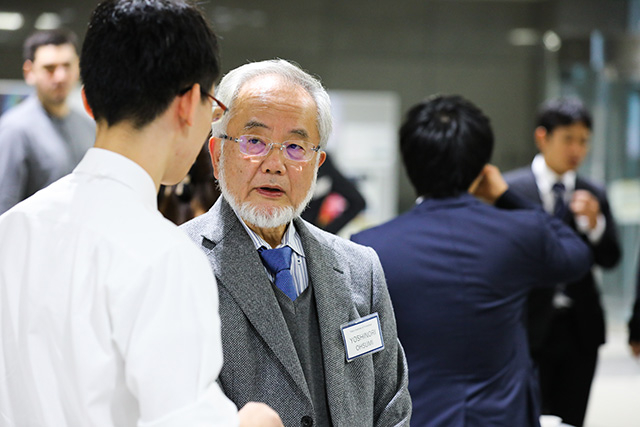 Dr. Tim Hunt: "My Life as a Scientist"

Dr. Bengt Nordén: "Discovery of a stretched conformation of DNA－ could it have a biological role?"

"Always try to work with people cleverer than you are."

On the second day of the symposium, the high school students joined pre-assigned groups to participate in laboratory workshops and group work sessions on themes related to "Science for Tomorrow."

The laboratory workshops offered participants an opportunity to enjoy and absorb world-class research through hands-on experience. Under the guidance, respectively, of Nobel laureates Ohsumi and Shirakawa, the students conducted experiments, conducted and analyzed data, and delivered small group presentations on their findings.

Held in parallel, the group work sessions with international researchers were discussion-based and focused on topics proposed by the Tokyo Tech students as ways of exploring themes related to each scientist's research and its potential applications. 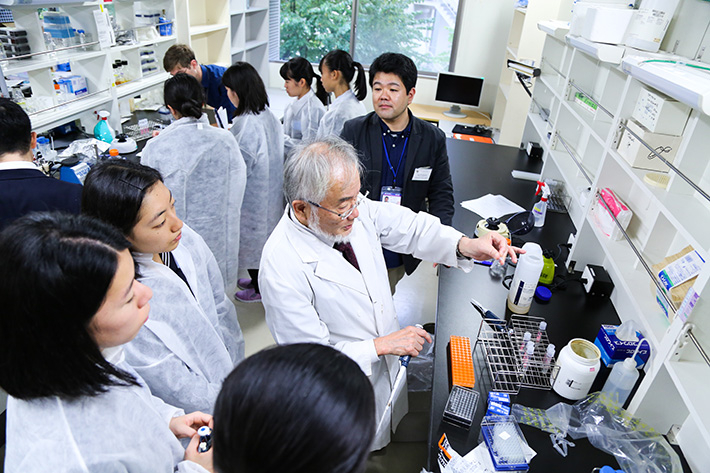 At Ohsumi laboratory on Suzukakedai Campus, students observed autophagy under a microscope and relived the excitement of Nobel Prize discovery.

"If you find something that grabs your mind and takes your interest, don't let it go. Follow it wherever it goes." 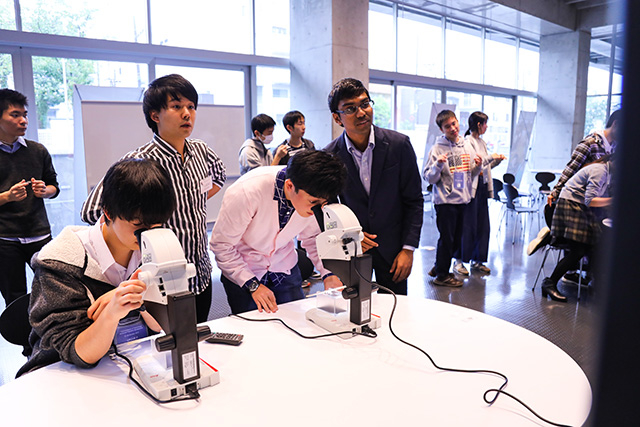 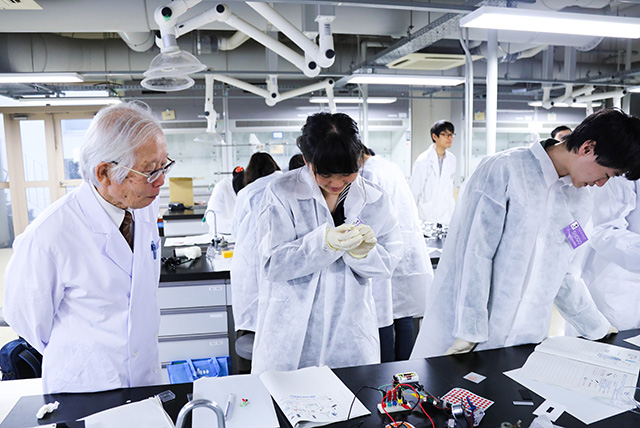 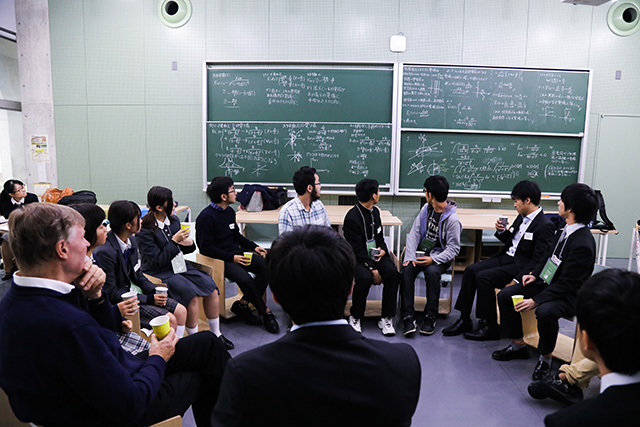 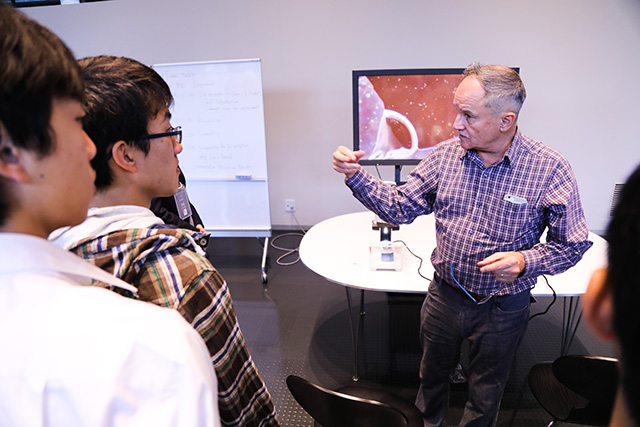 "Science is a social activity."

Following scheduling changes due to an approaching typhoon, group presentations by the high school students were held at the conclusion of the morning sessions. Though participants did not have the opportunity to share their results in a plenary session, the presentations were valuable as a means for students to gain a deeper insight into their assigned themes and to receive feedback directly from the scientists with whom they had worked.

Feedback on the MFS was very positive. The high school students expressed their excitement in working with prominent scientists and talked about the confidence they gained through their participation. Many also commented on the benefits of meeting peers who shared a strong interest in science.

"I found it most thrilling to come into contact with cutting-edge science and to ponder over the unknowns in science."

"These two days have been incredible – almost dreamlike."

"Having this opportunity to talk with prominent scientists allowed me to gain a sense of closer connection."

"The event was a great opportunity to meet students from other schools."

The symposium that brought together some of the world's most prominent scientists, high school students from across Japan, and Tokyo Tech students drew to a close with the awarding of certificates to the high school students. The students' smiles were a testament to how much hard work they had put in and rewarding to all those who helped organize the Tokyo 2017 symposium.

Explained Professor Hidetoshi Sekiguchi, the chair of Tokyo Tech's MFS Organizing Committee, "As Tokyo Tech faculty members, students, and alumni regularly participate in activities to promote interest in science education among elementary and secondary school students, hosting the symposium at Tokyo Tech seemed a natural extension of that work. We envisioned the MFS as an opportunity to bring inspirational researchers from around the world together with the young generation who may follow in their footsteps and, by doing so, encourage insightful communication on the theme of "Science for Tomorrow." We appreciate the efforts of Dr. Ada Yonath, Dr. Tim Hunt, Dr. Yoshinori Ohsumi, Dr. Hideki Shirakawa, Dr. Joseph Kirschvink, and Dr. Bengt Nordén, who shared their time and expertise with the participating students."

Students, faculty members, and staff members involved in the symposium

Students who joined Dr. Shirakawa's group were issued white coats, safety glasses, and gloves to conduct research experiments that had been tested beforehand by Tokyo Tech's twelve assistants and Dr. Shirakawa. The group's task was to fabricate conducting polymer secondary batteries and investigate their characteristics. 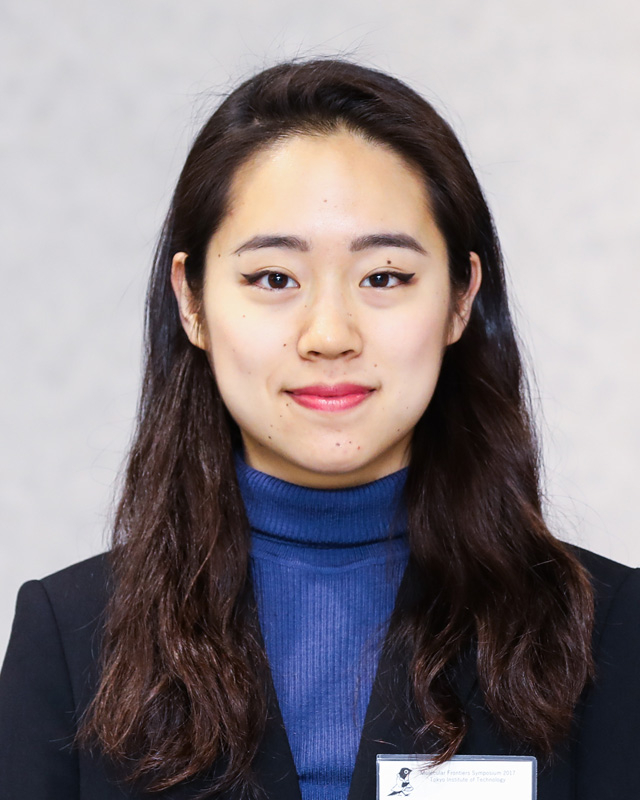 Yumiko Ito,
4th-year undergraduate at the
Department of Polymer Chemistry

It was such a precious experience for me to be able to join the workshop of a Nobel Prize winner, Dr. Shirakawa, who is an alumnus of Tokyo Tech. Our preliminary experiments gave me a chance to realize that practicing is as important as reading and studying to fully understand science or chemistry. I strongly felt that this workshop was a good opportunity for the high school students, too, to practice chemistry and see what the field of polymers is like. In this symposium, I was impressed by many female participants who told me that they like science and would like to continue studying science in university. I hope this symposium inspired them to think of being researchers in the future. 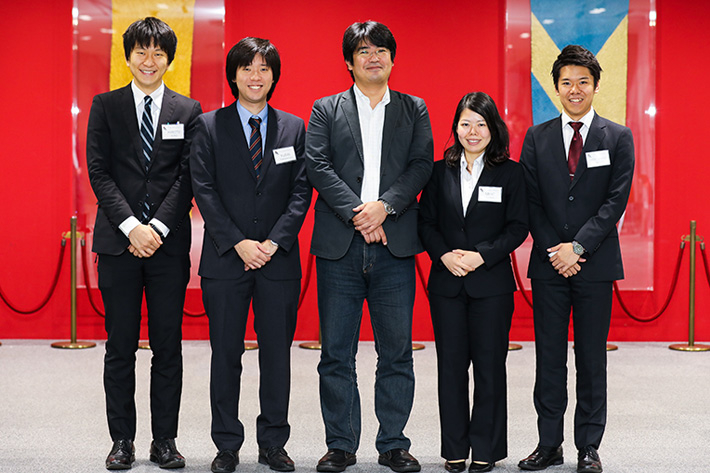 Participants discussed the possible impact that elucidation of the functions of ribosomes and proteins may have in the shaping of future of human life forms. 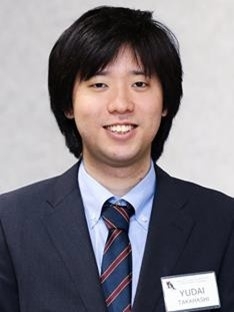 Yudai Takahashi,
1st-year master's student at the
Department of Life Science
and Technology

Once the session got going, students began discussing actively by themselves and came up with ideas that mentors would never have been able to think of. Being involved in this session, I was able to learn the significance of shedding inhibitions to share fresh ideas. 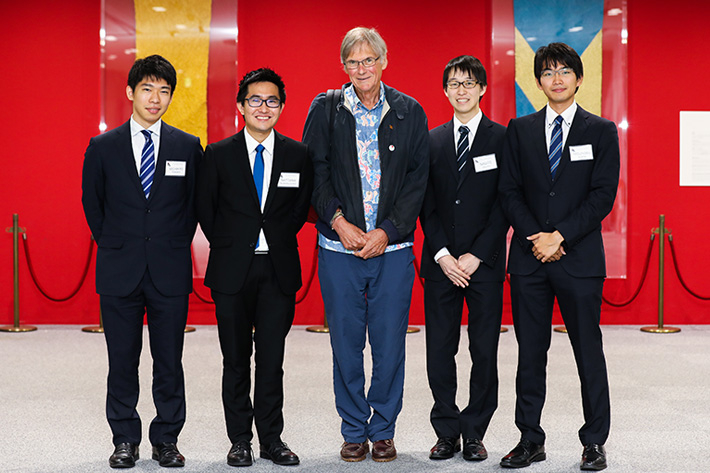 Participants discussed the topic of growth, expanding on ideas of what would become possible if cell cycles could be controlled. They also considered potential risks. 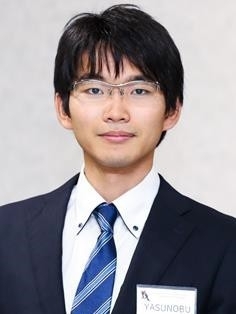 Yasunobu Asawa,
1st-year master's student at the
Department of Life Science
and Technology

At first, the high school students were so nervous they could barely talk to Dr. Hunt. We encouraged them to join in a casual conversation starting from what Dr. Hunt liked about Japan to what he ate for breakfast. Once the students overcame their shyness to talk in English, they became more communicative. They weren't the only ones who gained confidence in talking in a foreign language. As a student mentor, I was able to gain experience facilitating an event in a multicultural environment. 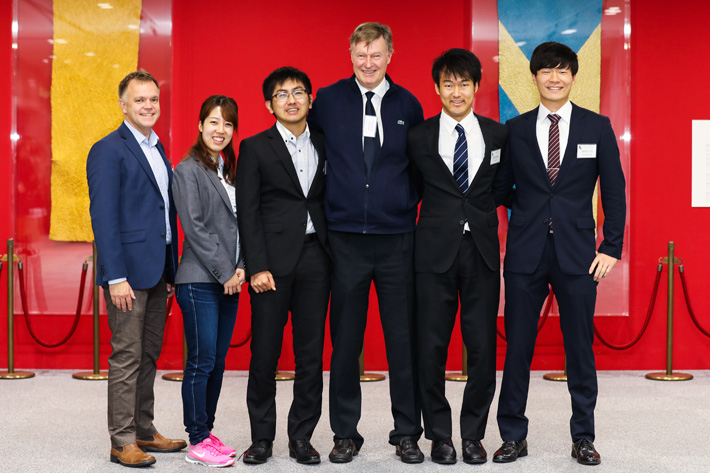 Students kicked off the discussion on the topic of "Is science and technology always beneficial for human beings?" by considering what makes young scientists become successful. 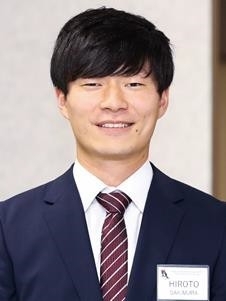 Hiroto Sakimura,
1st-year doctoral student at the
Department of Materials Science
and Engineering

For me, the experience has been so much more than the two days during which the symposium was held. The days leading up to the event were just as memorable. To prepare, we held many discussions, sometimes with input from faculty members, on the group work sessions. We asked ourselves, what do we want the participants to think about through the group work, and what, as a result, do we want them to return home with? To answer these questions, we needed to think in ways that were different from the approach taken in research, and this was beneficial in that it allowed us to broaden our minds. 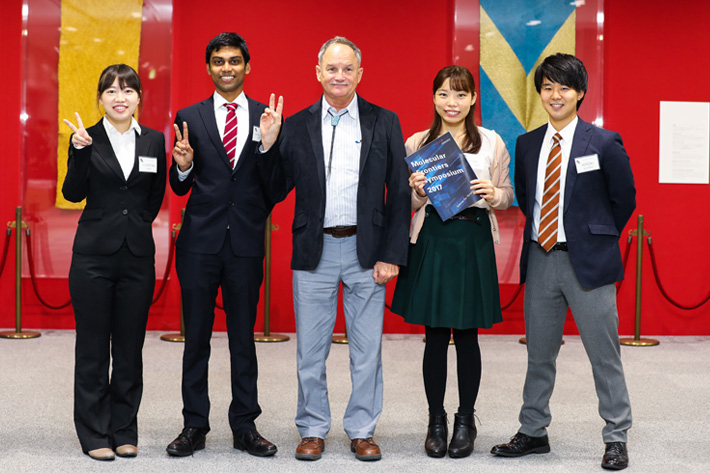 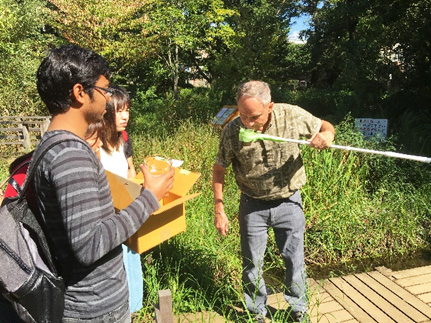 After conducting a short experiment that involved observing magnetotactic bacteria under an electron microscope, students discussed how we could benefit from magnetic sensory system research and what the world may look like in one hundred years. 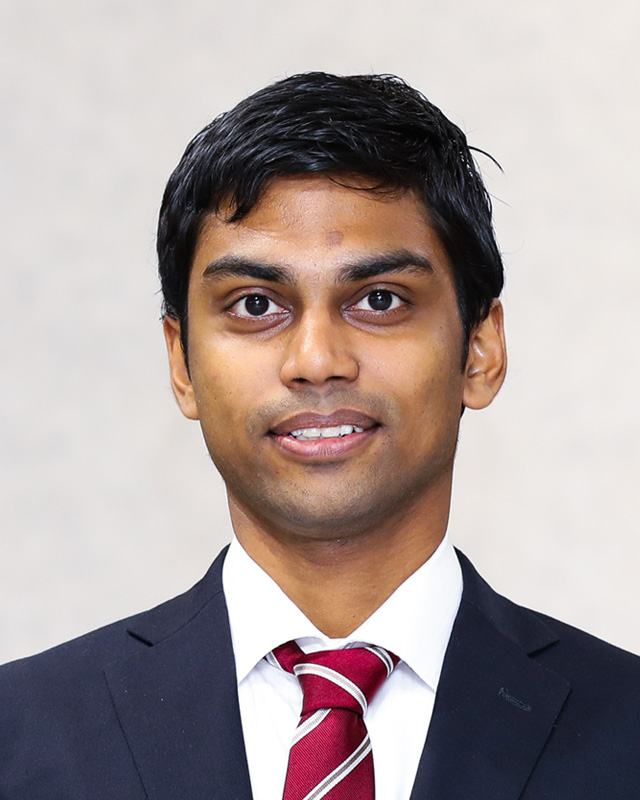 I thought the experiences of the two-day symposium would be a good stimulus for my way of thinking and my research. In preparation for the group work session, first, we had to understand a scientific field beyond the scope of our field of specialty. It was also challenging to prepare pre-learning tasks appropriate for the high school students… However, the high school students who participated were very rich in imagination. They actively discussed ideas with the scientists and student mentors and made great presentations.

A non-profit organization affiliated with the Royal Swedish Academy of Sciences, the Foundation has been running Molecular Frontiers Symposia around the world since 2006. A group of eminent scientists, including many Nobel laureates, serves as the Foundation's Scientific Advisory Board.