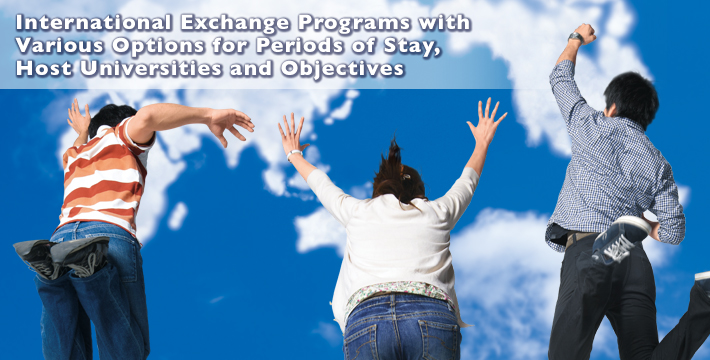 Tokyo Institute of Technology (Tokyo Tech) actively supports various opportunities for students to study abroad. The Institute has exchange programs with more than fifty universities in the U.S., Europe, East Asia and Oceania, and many of these incorporate tuition waivers. In such a program Tokyo Tech students are exempt from paying tuition at partner universities. In addition, the Institute offers more than twenty study abroad programs that flexibly fit students' objectives and abilities: short-term language study for students with lower language proficiency skills, and long-term study abroad for students with a high-level of language proficiency who intend to do research.

Three students who participated in Tokyo Tech study abroad programs report on their experiences below.

First Step for Those Who Want to Study Abroad in the Future, but Feel Unsure of Their Language Abilities

TASTE offers Tokyo Tech students an opportunity to attend a short-term language program outside Japan in order to improve their linguistic proficiency for future mid- to long-term study or research experiences abroad. If you feel unsure of your language ability, this option is recommended as a first step for studying abroad in the future. 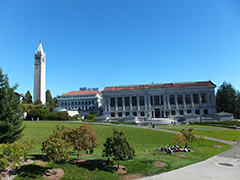 The world-renowned UCB, true to its reputation, had a free and lively atmosphere where you can feel the enthusiasm of the students and faculty members who come from various countries to make their dreams happen. UCB offers approximately 600 courses called the Berkeley Summer Session for regular students and students from other universities during the summer break. I was among about 15,000 students in the 2013 Summer Session, and I experienced various exchanges with people and cultures while at Berkeley. 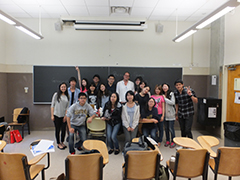 Located in a country of immigrants, UCB offers various courses for students who are non-native speakers of English. The teaching methods for English as a Second Language (ESL) are well studied, and the two courses I attended were productive and fun.

One of them, ESL8, was a small class of students with a similar level of English aimed at studying the basics of English. Monday through Friday I attended the Storytelling class for two and a half hours a day for six weeks. The class content ranged widely from the reading of novels and English compositions to street interviews and discussions. I improved my linguistic ability and communication skills very much. I broadened my global perspectives by sharing children's stories, experiences and dreams with students from around the world.

The other course, ESL 9V, was a small and practical course for students who seek a career in research. The course was held for five-hours each day, Monday through Friday, for six weeks. What is great about this course was that it was designed for students to acquire the necessary skills to think and communicate in English. I was taught to summarize literature in order to discipline my scientific thinking, and to improve my accent, pronunciation and vocabulary for the sake of communicating in English in my future research life. Students were given a series of assignments such as summarizing papers in their specialized fields, making fifteen-minute presentations and writing a paper on them. To prepare for these classes I put in long hours, and I frequently did not have enough time to sleep. However, I always became more motivated for the future when I succeeded in my presentations and received warm feedback from the others in the class. 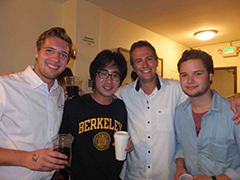 With my friends at the dormitory

Study abroad requires a lot of hard work. However, it is definitely worth the effort. Students tend to focus on clear-cut goals, such as raising scores in English proficiency tests. By studying abroad I learned that experiences such as making friends, increasing one's motivation and changing one's views on life are invisible but much more valuable. I appreciate the wonderful opportunities I had, and recommend that Tokyo Tech students take on the challenges of study abroad. 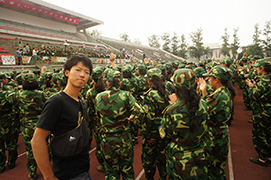 I studied in the School of Materials Science and Engineering at Tsinghua University. I did not join a laboratory because I enrolled as a 3rd-year undergraduate student. I took about ten courses each semester which included five or six courses in the School of Materials Science and Engineering, language classes for international students, and a shooting class to obtain credits for physical education. There were fewer international students than I expected, and in many cases I was the only one. As classes were taught in Chinese, I couldn't always follow them while looking up the meaning of words I didn't know. Since I couldn't understand what I was taught in the classes, I needed to go over everything later by looking for relevant literature written in Japanese or English on the Internet. I felt stressed before exams the first semester, because I took too many courses. The second semester I took fewer courses so that I could prepare for each one more intensively. There were many things I didn't understand during my period of study in China, but I overcame them thanks to the help of classmates. 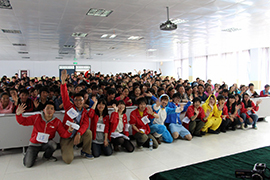 In the morning and afternoon I took classes, and at night I studied, went to hang out with friends or had meetings for the Japan-China exchange project I was helping to organize. I did not mind classes starting at 8 a.m., because I stayed in a dormitory located on campus. Most Tsinghua students lived in campus dormitories and went to classes by bicycle. Basically, I ate at university cafeterias on campus during the week, and dined outside the university on weekends. During our month and a half long break I traveled around China by train which was ideal. This exciting trip became a defining point in my study abroad. 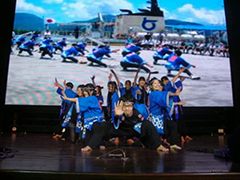 I went through a difficult time as the Japan-China relationship deteriorated during my stay in China. However, it is also true that I had valuable experiences for this same reason. I realized that I had various stereotypes and prejudices when I spoke with Chinese friends. One of the benefits of study abroad is that you become more conscious of more things than you are in Japan. 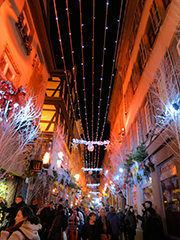 The program was comprised of three stages: classes, a laboratory internship at the universities and an internship at a company. On this year and a half long program, students study and conduct research with a focus primarily on electrical vehicles with the aim of obtaining a master's degree. My program started in September and I attended classes in Paris through December. From January I attended classes in the northern town of Lille through April. Then I came back to Paris to study in a university laboratory till the end of June, and did an internship at Renault from July to the end of the program. 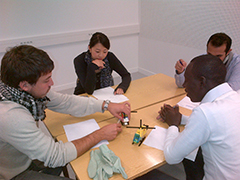 Due to my lack of linguistic ability I could not keep up at first. I recorded every class and listened to the recording after getting back to my dormitory room, and read relevant materials in Japanese to make up for the knowledge I missed. The classes were mainly lecture-style and their content ranged widely from project management and the basics of mechanical engineering to automobiles and the French transport system.

The classes I attended in Lille from January through April focused on electrical engineering, and lectures and exercises alternated. Students were given assignments after every exercise, which gave me a lot of trouble. There was a lot of group work and I did these assignments in cooperation with my classmates. 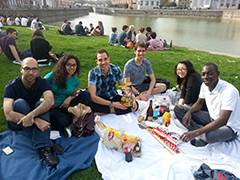 After completing my courses I conducted research for two months at a university laboratory, and did an internship at Renault for six months. My research topic was "Strategic Options of Materials for Electrical Vehicles." I conducted research on choosing automobile materials for the future from the dual viewpoints of the depletion of resources and cost. Working at a French company was a valuable experience. I experienced the differences in work between the French and the Japanese. I also learned what it is like to work in a company, and discovered many new things.

Earning a master's degree at a university abroad is not an easy thing. I felt a lot of stress while trying to avoid flunking my classes. However, after obtaining my degree I was able to appreciate it all the more due to the effort I had to put into it and enjoyed a feeling of accomplishment. I overcame many difficulties, because I was always aware of my goal of earning my master's degree. In addition, study abroad made me recognize not only what is good about other countries, but also what is wonderful about Japan. It gives you the opportunity to see Japan through an objective perspective and get to know other nations and cultures. Tokyo Tech offers many good programs to study abroad, and various organizations offer scholarships to promote study abroad. You should never give up in terms of funds or language ability, because there is support and study abroad is well worth the challenge. 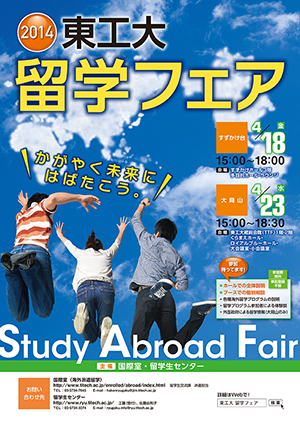 Tokyo Tech offers a wide array of international exchange programs, support, and systems to allow you to fulfill your dream of studying abroad. All of these will be introduced at this event. Please join us!

There will be student presentations on their study abroad experiences, programs, and linguistic advice in the halls. Individual consulting with Tokyo Tech students who studied abroad, Tokyo Tech administrative staff, and participating organizations will take place at the various booths. Admission is free and prior registration is not necessary.