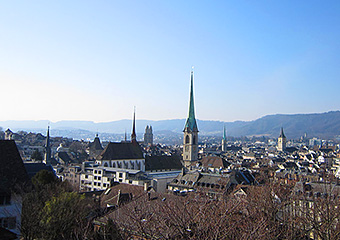 For decades, Tokyo Tech has been signing academic cooperation agreements with universities and research institutes around the world to promote the exchange of students and researchers. As of May 1, 2014, the Institute had university-wide academic cooperation agreements with 103 institutions in 27 countries and regions, and school-to-school agreements with 146 institutions in 35 countries and regions. Among them is Swiss Federal Institute of Technology in Zurich (ETH Zurich), a long-time and close partner of Tokyo Tech. 2014 marks the 150th anniversary of the establishment of diplomatic relations between Japan and Switzerland. 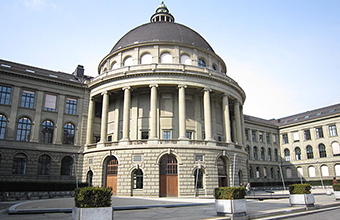 ETH Zurich was founded in 1855 in Zurich, a German-speaking city in Switzerland. The university has 16 departments in the fields of engineering, natural science and social science. The numbers of faculty and students are about 500 and over 18,000 respectively.1 ETH Zurich regularly appears at the top of university rankings and has 21 Nobel laureates among its graduates, including Wilhelm Conrad Röntgen and Albert Einstein.
ETH Zurich has an international student ratio of 37 percent and international faculty ratio of 67 percent.1 It is evident that the university's research activities and achievements attract students and researchers from around the world.

Tokyo Tech signed an academic cooperation agreement with ETH Zurich in 1978, and the universities have been jointly promoting the exchange of undergraduate and graduate students as well as researchers and faculty members ever since. Both universities provide scholarships for doctoral students and outstanding master's students who participate in an exchange program under their tuition waiver agreement.2 As a result of this cooperative effort, the number of incoming students from and outgoing students to ETH Zurich in the past ten years reached 60 and 50 respectively.

In February 2014, ETH Big Band Zurich, which consists of students from ETH Zurich, University of Zurich and other universities, held a concert at Tokyo Tech.3 The Institute's Latin music band, Los Guaracheros, also performed at the concert.

Further academic and cultural exchanges between Tokyo Tech and ETH Zurich are expected in the future.

Two students who participated in the exchange program shared their experiences.

Why did you choose to study at Tokyo Tech?

I decided to come here for many reasons. First of all, I was always interested in Japanese architecture as there are contemporary discussions in Switzerland and Europe that highlight their similarities with Japan. But the interesting part is of course the dissimilarities, which are numerous. As Tokyo represents modern Japan like no other city, it was always my preferred destination for exchange study. Above all, Tokyo Tech has a great reputation, and there are also architects I admire teaching here. In addition, Tokyo Tech is a partner university of my school, which makes the whole application process way more convenient. 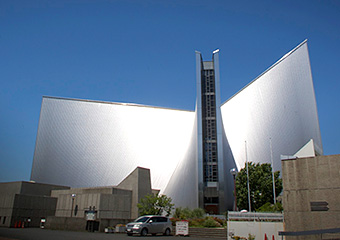 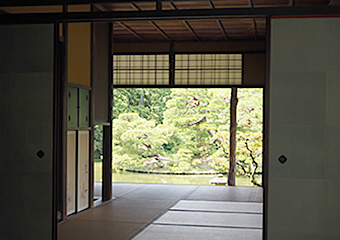 What are the similarities and differences you found between ETH Zurich and Tokyo Tech?

As at ETH, my major at Tokyo Tech is architecture. But even if the major is the same, the focus of the study is different. At ETH, the main focus lies on the design studio, which means your own work and design. Contrary to that, at Tokyo Tech, the main focus is the work in the Laboratory, which basically is research, design and written work one does with the Sensei. The Lab is structured like an office, while at ETH it is more like an atelier. But beneath the daily routine, there are many similarities between the two universities. Being located on campus makes it easy to access leisure facilities like sports halls, music practice rooms, and so on. Comparing the liveliness of the two campuses, Tokyo Tech has clearly more action going on in the outdoor space, which makes the whole surrounding very welcoming.

How will you apply your experience at Tokyo Tech to your future activities? 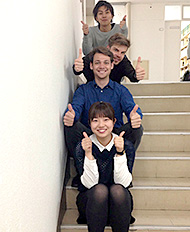 Maier (second from bottom) with members of his designing work group

Studying for five months at Tokyo Tech gave me a deeper insight into the way one can build in a shrinking city with a population way bigger than the Swiss one that is at the same time stressed by different natural forces. So basically Tokyo could be, in many ways, a futuristic scenario of the European cities. What I learned here on numerous field trips, lessons and studios will be really helpful in my future work as a planner, whether it is in Switzerland, Europe or elsewhere.

Why did you choose to study at ETH Zurich? 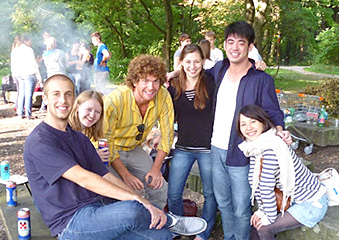 Yabu (far right) at a BBQ with her international student peers

ETH Zurich is one of the top sci-tech universities in the world that attracts students from around the globe. I felt that I would be able to acquire not only new knowledge but also a global perspective. As a step toward my future activities on the international stage, I decided to study at ETH Zurich with the aim of identifying and improving my abilities as well as building my confidence.

I also wanted to learn another language while I studied abroad for a year. Switzerland has four official languages and is a melting pot of various cultures. Being able to improve my English proficiency while studying in a German-speaking city was a big appeal to me.

What did you study and research at ETH Zurich? 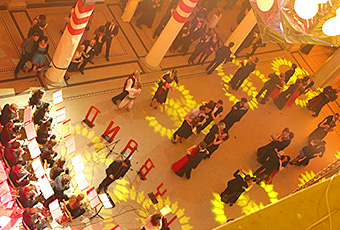 I mainly took materials classes and learned about organic, inorganic and metallic materials comprehensively. The classes included interesting activities such as group projects, looking at latest research and case-studies, and practical assignments. I was able to spend meaningful time studying with other students.

Additionally, I conducted research on dip-pen nanolithography4 for four months in two labs. I had a hard time conducting the research as this was outside my area of expertise, but I eventually put together a paper and made a presentation. I felt a great sense of accomplishment.

What are the similarities and differences you found between Tokyo Tech and ETH Zurich? 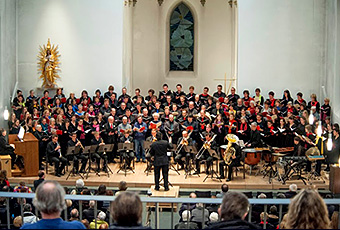 Concert of the choral society Yabu was a member of

The students are similar in that they are very serious about their tasks. I thought that the way in which ETH Zurich students carried out their tasks in group works was similar to that of Tokyo Tech students and Japanese people in general.

On the other hand, ETH Zurich has higher ratios of female students and faculty as well as international students. Most of the classes and research were conducted in English and my academic supervisor was a Turkish woman.
There was a lot of communication between students and faculty in the classes, and students were encouraged to express their ideas proactively. In exams, there were many "how" and "why" questions, so explanatory answers were required. I felt that the students' understanding of the subjects and their explanatory skills were tested.

How will you apply your experience at ETH Zurich to your future activities? 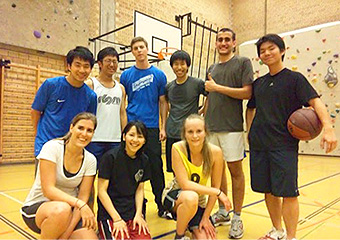 Yabu (front row, second from left) with friends at a basketball game

It's been almost one year since I returned to Tokyo Tech. After studying at ETH Zurich, my motivation for conducting research has changed. I know that not every knowledge I acquire will directly benefit my research, but I learned that making progress in research takes a certain mentality and I gained the motivation to seek knowledge about what I find interesting.

I will start working as an engineer next spring. As I will be working internationally, I will embrace the multicultural perspective I developed at ETH Zurich.