Alumni on the World Stage - H.E. Shingo Tsuda, Ambassador of Japan to Qatar

Tokyo Tech graduate Shingo Tsuda worked at a trading company before being appointed Japanese Ambassador to Qatar in October 2013. He talked about his experience as ambassador and the current state and potential for growth of the emerging country Qatar.

Over 40 years of fruitful diplomatic relations

A year has passed since you were appointed ambassador. How do you feel about the experience?

Time has really flown by since I arrived in Qatar in October 2013. Qatar gained its independence from England in 1971; and despite having a population of just 2.2 million and an area about the size of Japan's Akita Prefecture, it has become one of the major players in the Middle East as a result of the rapid growth of its petroleum and liquefied natural gas (LNG) industry.

Qatar and Japan celebrated 40 years of diplomatic relations in 2012. Both countries have developed close ties, not only through business and economic cooperation, but also through extensive partnerships in such diverse areas as culture, education, healthcare, science, and infrastructure. In addition, when the Great East Japan Earthquake struck, Qatar was quick to provide both monetary and energy assistance. The government offered USD 100 million to help with recovery efforts and increased its LNG supply to us. I recognize my role as an intermediary in deepening such relations.

I understand that you majored in architecture. 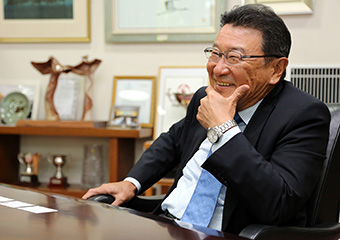 I studied under Masao Inui, who is now a Professor Emeritus at Tokyo Tech. His area of specialization is the use of light in architecture and urban design, and the use of color in exteriors and interiors, landscaping, and the environment. His research looked at, for example, how the color of buildings affects people, how lighting can make buildings look beautiful, or how to use lighting inside buildings. There were fewer specialists in architectural color planning than there were in general color planning at that time, which made Professor Inui a pioneer, someone who taught us the complexity and importance of color planning.

I focused on the psychological influence exerted by the exterior colors of skyscrapers in the Inui Lab and studied it as the topic of my graduation thesis. I graduated from Tokyo Tech in 1975.

Seeking out opportunities to work overseas

You joined a trading company after graduation. What was the connection between your major and the work you were doing at the company? 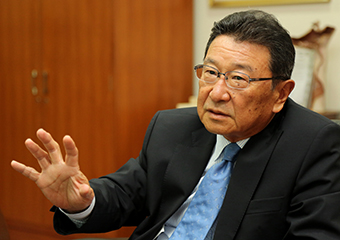 To tell the truth, I wanted to continue on for a master's degree; but my father really wanted me to finish up and find a job. So, I put my plans aside, and started filling out applications. I didn't intend to stick to what I studied at college, so I didn't limit my job search to architecture. Of course, because I had hoped to continue studying, I got a late start sending out applications. Fortunately, though, I received an offer from Marubeni Corporation.

How did you get a spot overseas? What was the first country you were sent to?

I thought working at a trading company would be a great chance to go overseas, but I ended up in the Steel Structural Materials Department. I tried to keep in mind the famous proverb, "Three years on a cold stone will make the stone warm," and hoped that my chance would come if I bided my time. After four years, though, I realized that I had to make a move on my own. I applied for the in-house overseas trainee program, which, at the time, meant being sent overseas for training. Looking back, I remember how hard it was just to get an interview because I had been in charge of the domestic market the entire time. My chance finally came, though, and I asked to be sent to Brazil. Unfortunately, someone was already assigned to that spot, so I chose Damascus, Syria. That was in 1979.

In on the first joint LNG development project in Qatar

How did you end up in Qatar? 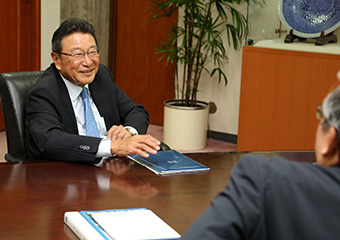 In 1983, I was transferred to the Plant Division which was in charge of development of energy and industry-related projects overseas. I went to Qatar for the first time in 1987. My role was to complete a feasibility study* and work on the development of Qatargas, the first LNG production company in Qatar. Qatargas is backed by an international consortium that includes Japan. The first plant was completed at the end of 1996 and production in the first year was 6 million tons. This was the start of Qatar's current growth. Since then, LNG production has steadily expanded to make Qatar the world's leader in 2010 with an annual production of 77 million tons.

An evaluation and analysis of a proposed project's potential

What was your impression of Qatar at that time?

Qatar was exporting a certain amount of petroleum, but other industry had not yet developed. I can say it was just a little country. Qatar is located on a small peninsula in the Persian Gulf. In the capital city Doha, there are many modern buildings now. When I first arrived there, though, the Sheraton Hotel was the only notable building, even in the West Bay area where the Japanese Embassy is located.

What made you decide to accept the appointment as Ambassador to Qatar?

At the time I was offered the appointment, I was president of a company related to Marubeni Corporation. The company has about 1,000 employees and I was happy with the job, so it was a very difficult decision for me. I did, however, feel that it was an honor for me, as an individual at a private company, to be considered; and I did feel the desire to be of service. In the end, I decided to accept the offer.

Human resources development as the key to producing global leaders

What are Qatar's goals, and what are the problems it is facing? 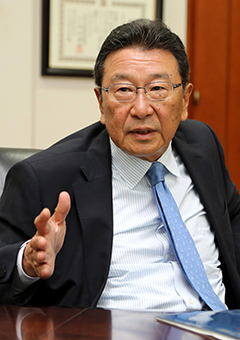 Qatar is currently utilizing its geographical location between Asia and Europe to full advantage, and this advantage is supported by a wealth of natural resources. Qatar is also striving to shift from its reliance on petroleum and LNG as sources of income. Under Qatar National Vision 2030, the country has been promoting economic and social diversification. The Middle East is also set to host the FIFA World Cup for the first time in 2022.

However, it is also extremely important for Qatar to promote education and the development of human resources to enhance its presence in both the region and the world. The Qatar Foundation, a government-sponsored organization, plays a central role in the development of educational facilities, including the establishment of Qatar Academy, the enticement of foreign universities, and implementation of the e-learning portal project. In Doha's Education City, a number of foreign universities such as Georgetown University and Carnegie Mellon University have opened extension campuses, which attract students from all around the world. I also hope to introduce the world renowned technology of Tokyo Tech to Qatar and other Middle Eastern countries through the promotion of personnel exchange.

Ambassador Tsuda giving a speech at the reception 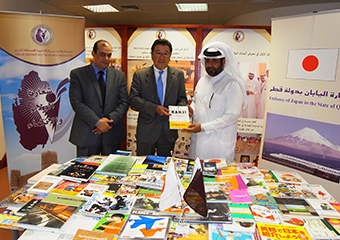 Last of all, how would you encourage Tokyo Tech students to become global leaders?

I would say that it is essential to remain positive at all times and in all situations. Look squarely at the position and environment you have, consider ways to achieve your goals, and take action. Believe in yourself, and move forward. 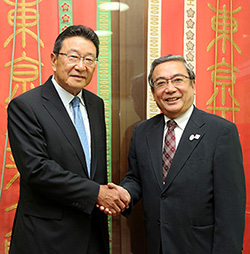 Born in 1951. Graduated from Shuyukan Prefectural High School, Fukuoka. A 1975 graduate of the Department of Architecture and Building Engineering, Tokyo Institute of Technology, Shingo Tsuda joined Marubeni Corporation, where he served as Regional CEO for Europe, for the Middle East and North Africa, and Managing Executive Officer. He left Marubeni Corporation in April 2013 to serve as President of Marubeni Information Systems Co., Ltd., a position he held until assuming his post as Ambassador of Japan to Qatar in October 2013.