The 24th-edition of Tech Tech has been released. Tech Tech is the Institute's magazine intended for high school students, written in “intelligible” Japanese and containing lots of images. It introduces them to the various aspects of the Institute from the latest research, to student life, to laboratories and alumni activities. The most recent edition features studying abroad: “We Go Where We Want To! The Tokyo Tech Way of Studying Abroad.”

Tech Tech No. 24 Table of Contents

Highlights of Tech Tech No. 24

We Go Where We Want To! The Tokyo Tech Way of Studying Abroad

For students who can imagine a future of conducting research and making the next groundbreaking discoveries, Tokyo Tech can be the door to the world. For Tokyo Tech students the rest of the world is not far away.

There are no borders in research. With increased globalization, researchers are playing active roles around the world. Therefore, Tokyo Tech proactively encourages students to study abroad. The Institute has concluded academic cooperation agreements with more than fifty universities in the USA, Europe, East Asia and Oceania. Many of these agreements include tuition waiver programs. Tokyo Tech has over twenty programs for studying abroad, which are characterized by a wide range of variation for meeting students' objectives and language abilities. The programs span the gamut from short-term intensive language programs for students who are not confident in English, to long-term study abroad programs for conducting extensive research aimed at students with a high level of English proficiency. In order for students to become leaders in the fields of science and technology, irrespective of national borders, Tokyo Tech provides these opportunities for studying abroad. 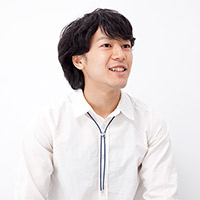 1. Improve Your English at the University of Washington

TASTE provides financial support to Tokyo Tech students who will participate in a short-term language program at a partner university before beginning a mid- to long-term study or research program abroad. The period of language study ranges from 19 days to 3 months. TASTE aims to raise the language proficiency of students who have already made plans to go abroad for study or research.

After a 19-day language program I felt more familiar with the rest of the world.

Tatsuhiro Tsukamoto participated in a language program at the University of Washington for 19 days in 2012. He was interested in the United States among other nations, because there are many pharmaceutical companies in America. He has his sights set on developing materials involved in the creation of new medicines in the future. At the University of Washington, Tsukamoto studied English and American culture with students from all over the world. He focused on conversational skills and attended a conversation class where they discussed films in a group of about fifty international students from France, Saudi Arabia, China and Korea. Tsukamoto was impressed by a class where students do research on assigned themes and make presentations. As students were placed into classes according to their level of English proficiency, he had no concerns about keeping up with his class.

Tuskamoto is a baseball fan and went to a ballpark in Seattle three times with friends. Nineteen days quickly passed and he now feels that the rest of the world is closer. His image of studying at a graduate school abroad has become more concrete as a result of this experience. 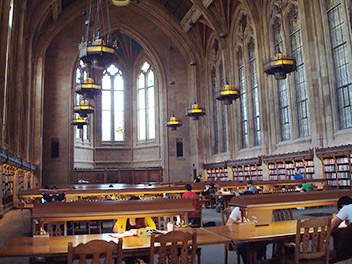 Library at the University of Washington

2. Study Econophysics at the Swiss Federal Institute of Technology (ETH)

Studying in a world-renowned laboratory, I experienced global trends firsthand.

Yoshihiro Yura made a presentation at an international conference when he was a 1st-year master's student at Tokyo Tech, which came to the attention of an ETH professor of econophysics. Yura decided to study at ETH for six months from October 2012 and took advantage of the Re-Inventing Japan Project. The project provides travel expenses and scholarships for study at leading science and technology universities, including ETH. Yura was affiliated with that same professor's world-renowned laboratory for econophysics. The professor is French, and there were international post-doctoral researchers from Russia, China and other countries along with students in the laboratory. Yura attended regular lab sessions to exchange opinions and conducted joint research with a Swiss researcher. He was attracted to the wealth of opportunities for international exchange at ETH. In Europe it is easier to keep up with the latest research, because there are more interactions among researchers. Yura now applies the methodology he studied in Switzerland to his research on the stability of social systems, including financial markets, from a scientific standpoint. Based on his experiences at ETH, Yura has now set his goals even higher. 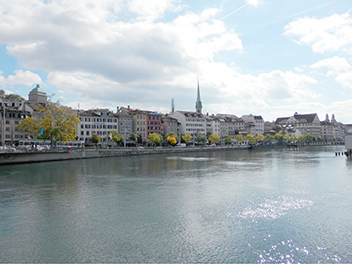 Tokyo Tech offers various programs for students who want to study abroad or become globally competitive. What is most needed is passion on the part of the student. Study abroad through one of Tokyo Tech's wide array of programs!

Leading the World in the Field of "Energy Conversion"

Recently, fuel cells have begun to be used as devices for the home. Perhaps you know that hydrogen is used as the fuel. They generate electricity by producing a reaction between hydrogen and oxygen in the air. This is the reverse reaction of that involved in the electrolysis of water. However, in the fuel cell that we've been researching, we use carbon and methane as fuels. Why is that? Actually, free hydrogen barely exists in the natural world. Therefore, energy is needed to produce it, and to that extent, the overall efficiency of converting it into electricity decreases. In addition, hydrogen has to be stored in high-pressure tanks at extremely low temperatures. Therefore, it is not exactly an ideal source of energy.

As a result, what has been gaining attention over the past few years are efforts to use hydrocarbons for fuel in direct fuel cells, as they are abundant in nature. We were one of the first laboratories in the world to begin research in this field. In fact, we obtained a patent for a "rechargeable direct carbon fuel cell," and have achieved a power output (per unit) that is among the highest in the world. The biggest problem is the phenomenon known as "carbon deposition," which causes a reduction in power generating efficiency. However, we have proposed several solutions that are based on, among other things, knowledge from the field of chemistry, especially electrochemistry and materials chemistry.

At the same time, we have been conducting research aimed at increasing the power generating efficiency of solar cells. By inserting nanoparticles of gold and silver into solar cells that use pigments, we succeeded, for the first time ever, in increasing the rate of the absorption of sunlight and photoelectric conversion efficiency of dye-sensitized solar cells. We also succeeded in synthesizing nanoparticle membranes of gold and silver that, when applied between silicon membranes, increase the conversion efficiency. Both types of nanoparticle membranes employ the strong vibrations of electrons in metal, which are celled as localized surface plasmon.

However, if basic research in the field of "energy conversion" is not put to practical use in the everyday world, then it really has no meaning. The situation can be compared to soccer: even if the abilities of individual players improve, it has no value if it is not linked to the team's improving and winning. Based on that thinking, we have also put effort into developing an overall energy system. In particular, for distributed electric power generation, it is important to think about the various methods for energy conversion, the combination of these methods, and the utilization of these methods in conjunction with other devices in a system or building. One example of this is the effective use of the exhaust heat from fuel cells. There is a "zoom-out perspective," which broadly views such a system as a whole, and a "zoom-in perspective," which pursues basic, constituent technologies. By achieving both of these, we want to continue in the future to create things that are useful to mankind.

With one of the four power-generating devices in the laboratory, we convert gas and liquid fuels into electrical energy. Their two control screens are the touch-panel type. This device was created through joint research, and in the Ihara Laboratory we affectionately call it "Machine No. 3."

This device provides AC signals of different frequencies to the fuel cell, and then, based on the latter's response, separates the resistances inside the fuel cell according to their differences in speed. It is an important device for electrochemically investigating the causes of variations in performance among the fuel cells we've made.

Tech Tech No. 25 is scheduled for publication in March 2014.