The coastal areas of Japan's Tohoku region, the northeastern part of the main island, sustained enormous damage during the tsunami that was triggered by the Great East Japan Earthquake on March 11, 2011. Many Tokyo Tech students immediately volunteered to help in the aftermath of the quake, but others did not know how to aid reconstruction efforts right away.

On the initiative of a project called Student Support Good Practice, the Tokyo Tech Photo Rescue Project was launched in September 2011 as a campus-based, post-earthquake-and-tsunami reconstruction effort. Tokyo Tech students, faculty and staff members cleaned water- and mold-damaged photos from the areas hit by the tsunami. The materials and know-how necessary for this project were provided by FUJIFILM Corporation and heart-project volunteers.

Between September 2011 and December 2012, 56 cleaning sessions were held at Tokyo Tech. 943 volunteers cleaned 1152 photo albums and about a thousand loose photos. The photos they restored came from the Yuriage area of Natori City in Miyagi Prefecture and the town of Yamada in Iwate Prefecture. Participants also included students from the University of Tokyo, Tokyo Medical and Dental University, Tokyo Metropolitan University, Komazawa University, Shibaura Institute of Technology, Chuo University, Hosei University and Waseda University as well as working individuals. 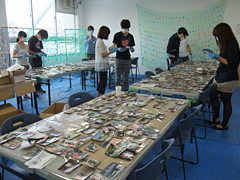 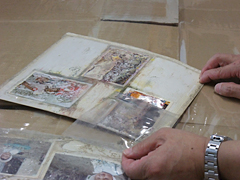 Photos are Carefully Removed from a Soiled Album

Photo restoration involves a series of activities encompassing much more than merely cleaning the photos. First, volunteers must carefully remove each photo from its soiled album. Next, volunteers wash off surface stains from salt water and mud to avoid further degradation due to mold and bacteria. The photos are dried and put into new albums.

Volunteers also painstakingly record in a spreadsheet any notes found on the backs of the photos or written on the soiled album pages. Then they prepare reference charts for the photos which include information about event names and locations. When possible, volunteers try to clean and restore the original photo album. All these measures are taken to ensure that the owners of the photos will be able to find and recover them.

To date, all photos cleaned at Tokyo Tech have been returned to Yuriage and Yamada. There they were put on public display for residents to come, find and claim their albums. Volunteers felt the significance of their work after receiving emails from these residents delighted by not only recovering their photos, but finding them in such good condition after having been washed away by the tsunami. 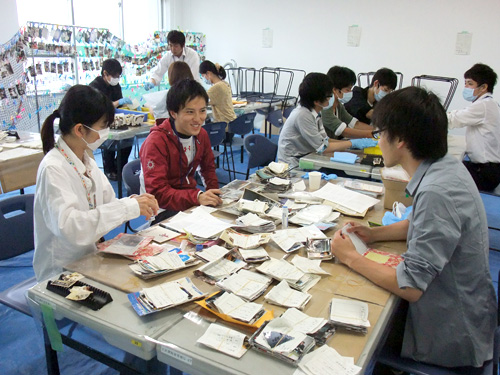 Thank You Emails and Letters of Appreciation 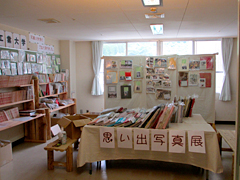 Restored Photos/Albums are Displayed in the Town of Yamada

Letter from Tatsuya Abe
Town of Yamada, Iwate Prefecture
Hello. Pardon me for sending this email out of the blue. My name is Tatsuya Abe and I live in Yamada, Iwate Prefecture. My house was completely destroyed by the Great East Japan Earthquake, tsunami and resulting fire. My family was safe and we are now living in temporary housing. We were disappointed at having lost all of our mementos, especially family photos including ones of my son and daughter when they were very young. When these beloved family photos were returned to us, tears welled up in my eyes.

I work at the Roadside Station in the town of Yamada. If you get a chance to visit Yamada, please drop by, because I would like to thank you in person. I am extremely grateful for what you have done for us.

Letter from Takayuki Nakazawa
Town of Yamada, Iwate Prefecture
Hello, my name is Takayuki Nakazawa. I live in Yamada, Iwate Prefecture. I am too grateful for words, since learning that you cleaned and restored photos washed away by the tsunami at the time of the Great East Japan Earthquake. I felt happy and my mother was even happier. I am 32 years old and we recovered a photo of me when I was a baby. There are still lots of people choked by tears at having lost both memories and mementos in the tsunami. I hope that the Tokyo Tech Photo Rescue Project continues its activities for their sakes. I will support you with my whole heart. Thank you.

The Tokyo Tech Photo Rescue Project received a letter of appreciation from the city of Natori for the project's Yuriage photo cleaning activities. 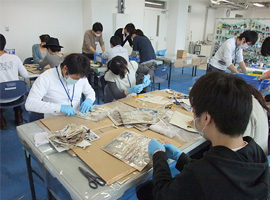 Some people, such as Mr. Abe and Mr. Nakazawa, were lucky. They found their photos. Others have not. Many cleaned and restored photos have not yet been found by their owners. There are so many photos and albums, that it is difficult for residents to find their albums. Moreover, some people are not ready to look for their photos yet. However, to make it easier to find photos in the future, the Tokyo Tech Photo Recue Project has decided to simultaneously digitize the photos while cleaning them and create a searchable photo database that people can access on their home computers.

Reconstruction efforts in Tohoku still have a long way to go. Despite being physically far from the disaster-stricken area, the Tokyo Tech Photo Rescue Project will continue its activities to support those struggling with the aftermath of 3/11. 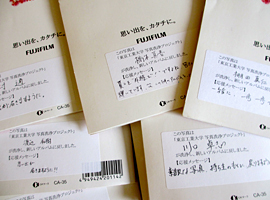 Kei Kondo, 3rd year
Department of Social Engineering, School of Engineering
I was interested in participating in volunteer activities to support the reconstruction of the Tohoku region after the Great East Japan Earthquake, but did not know what to do. Then I heard about the Tokyo Tech Photo Rescue Project. The good thing was that I could participate in the project easily as it conducts its activities on campus. It was a wonderful experience to work together with people from different schools, departments and years.

Toru Kawamura, 3rd year
Department of Industrial and Systems Engineering, School of Engineering
Even though I was unsure about whether or not my work would have a positive impact, I thought that if even only one restored photo is returned to someone who finds it meaningful, then my work will have been worth it. Because to that person, that one photo is not merely a photo, but something much more valuable. Since becoming a university student, I have been caught up in the triple lures of time, money and material things, but the Tokyo Tech Photo Rescue Project gave me a good chance to view society from a different perspective. 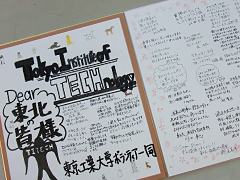 Lila Kitayama, 1st year
Department of Environmental Science and Technology, Interdisciplinary Graduate School of Science and Engineering
We returned restored photos to the town of Yamada, a place with beautiful mountains, sky and ocean. One day I received a thank you email from a person in Yamada who had recovered his photos. I was able to meet him when I visited Yamada as a volunteer. His family was safe during the Great East Japan Earthquake and tsunami, but his house and all of his mementos were washed away. He expressed his gratitude for the photos we cleaned. So many memories of entrance ceremonies, sports meets, travels, wedding ceremonies and everyday life were in those photos we restored. I sincerely hope that others will have their photos gradually returned.

Shingo Hashimoto, 2nd year
Department of Value and Decision Science, Graduate School of Decision Science and Technology
I had three powerful experiences while participating in the Tokyo Tech Photo Rescue Project. One, I was able to step back for a moment from my fast-paced life of research deadlines and other tasks and take time to think about the disaster-stricken areas. Two, I felt connected to these distant areas even though I am in Tokyo. Three, I met people with similar interests. Most of all, I was impressed by the email from a person in the town of Yamada, Iwate Prefecture, who had photos returned. The email still goes straight to my heart. 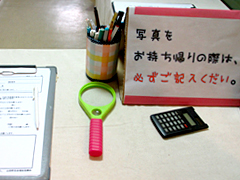 Takayuki Kawaguchi, 3rd year
Department of Energy Sciences, Interdisciplinary Graduate School of Science and Engineering
I spend my days in academia, so participating in the Tokyo Tech Photo Rescue Project was a unique experience for me. Spending my time doing something other than research is unique enough. What is even more unique, was to work with Tokyo Tech students, faculty and staff as well as with students from other universities and working people. We were all there for different reasons, yet worked together to support the reconstruction efforts for Tohoku. This was an invaluable experience. The project room always had a warm, positive feel to it. I enjoyed the time I spent working there.

When we received thank you emails from photo owners in the disaster-hit areas, I was really moved. I also get a lump in my throat whenever I think about those who cleaned photos with me. The Tokyo Tech Photo Rescue Project gave volunteers a chance to meet many people. The project meant a lot to me and I would like to thank everyone who supported and continues to support this project.