Sharing the joy of making things with children

What is Shamo Robocon? 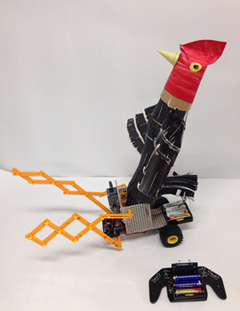 Shamo Robocon 2014 took place on August 30 and 31 as part of an annual local festival called Kawamata Shamo Matsuri in the town of Kawamata, Japan.

Shamo Robocon is a robot contest for children. In this event, children build robots that resemble shamo, a special breed of rooster and a local specialty of Kawamata. The first Shamo Robocon was held in the spring of 2013. The event is planned and operated by the Shamo Robocon Committee in cooperation with the Kawamata Municipal Office. The Committee consists of Associate Professor Naoya Abe's lab (Abe Research Group, Department of International Development Engineering, Graduate School of Science and Engineering); International Development Academy (IDA), Tokyo Tech's social club; and students from Tohoku University and Fukushima National College of Technology. The Committee hopes that participating children will discover the joy of making things and have fun with the audience.

The birth of Shamo Robocon

Shamo Robocon's roots go back over 20 years to a group called the Social Engineering Meeting. The group was organized by Tokyo Tech Professor Emeritus Osamu Abe (then professor of the Department of Social Engineering) and Takashi Kuramata, former representative director of International Development Associates Ltd., who was an assistant professor of the Department of Social Engineering at Tokyo Tech at that time. They regularly gathered to discuss issues related to underpopulation. Michio Furukawa, the current Mayor of Kawamata, happened to be a member of the group. Thus, a bond was formed between Tokyo Tech and Kawamata, and 20 years later, Shamo Robocon was born.

After the Great East Japan Earthquake of 2011, Kuramata, who also serves as the Local Ambassador for Kawamata, talked to Associate Professor Naoya Abe, a graduate of the Department of Social Engineering, about his desire to support the earthquake-stricken town. As a result, Junichirou Ishio, a doctoral student in the Abe Research Group, and other IDA members visited Kawamata for fieldwork with the students of Tohoku University and local students of Fukushima National College of Technology, and planned an event that focused on two objectives: offer a place for communication and recreation for children, and promote local specialties. After a series of discussions, an idea that incorporated shamo and robot contest--Shamo Robocon--was born.

With the support of the Tokyo Institute of Technology Foundation, Tokyo Tech members, especially Kota Kawai, Kengo Koutera, and Yuki Takahashi, dedicated themselves to developing prototypes of rooster robots and preparing robot kits. Their efforts paid off on March 24, 2013 with the launch of the first Shamo Robocon. A member of the Shamo Robocon Committee from Tokyo Tech commented that despite being a product of trial and error, the event received a favorable reception from parents and municipal office staff, and participating children had a lot of fun. 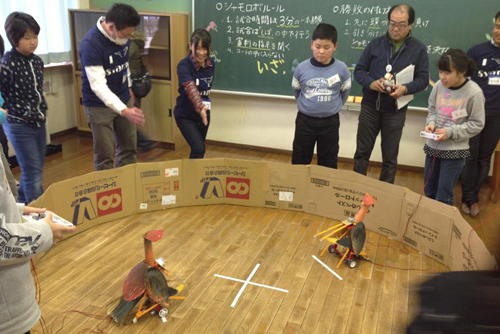 Following the success of the event, Ishio spent three months in Kawamata for an internship, further strengthening the bond between Kawamata and Tokyo Tech. As a result, the second Shamo Robocon took place as part of Kawamata Shamo Matsuri, the town's biggest festival, in the summer of 2013. The event had a storyline wherein the robots created by children defeated an evil giant rooster robot with the power of friendship. This was extremely well received by not only participating children but also visitors of the festival. 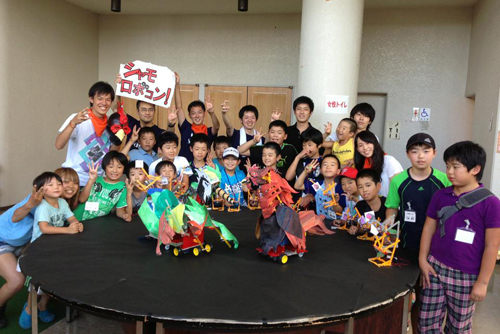 Participants of the second Shamo Robocon

The Committee prepared for the third Shamo Robocon with the aim of revitalizing the town of Kawamata, especially because the third event had been recognized by the government as a relief project for municipalities affected by the Fukushima nuclear disaster.

In planning the event, Committee members from Tokyo Tech placed great emphasis on having children create their original robots and making the event enjoyable for local residents as well.

Under a new team leader, Yuji Hirai, the Committee prepared kits and manuals so that children could make the robots by themselves. In addition to putting together the robots, children could freely design the exterior of their robots. Furthermore, in order to make the outcome of the contest clear to everyone, the Committee introduced a game whose objective was to pop the balloons attached to one another's robots. 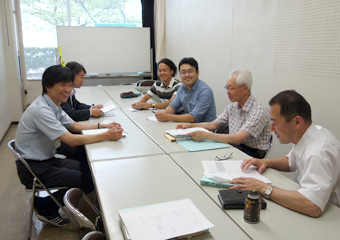 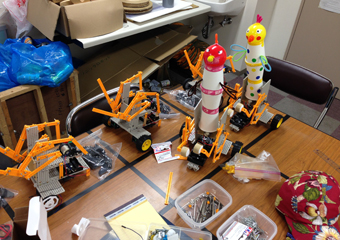 On the first day of Shamo Robocon 2014, hand-made, egg-shaped packages containing robot kits were distributed to twenty children. Under the guidance of student staff members, they put together their robots. Children were so engaged in robot-making that one parent said, "If only they would focus on their studies this much." 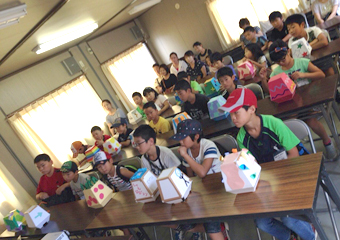 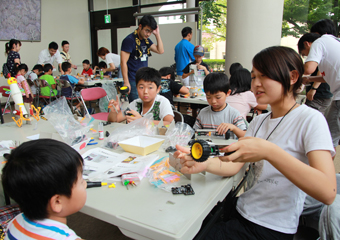 Rooster robots made by children

The robot contest took place on the second day. For one minute, contestants engaged in heated competition, controlling their robots with remote controls and doing their best in popping the opponents' balloons. The robot with the most balloons left at the end of the minute was declared the winner. The event drew a large attendance and the venue was filled with excitement as the audience roared with cheers.

The audience also voted for their favorite robot based on design, and the winner was honored with the best design award. 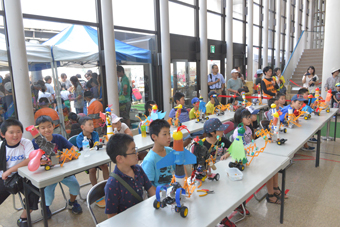 Children and their rooster robots 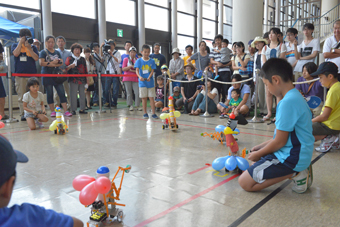 An awards ceremony took place on the main stage of the festival after the event, and the winners of the contest and best design award accepted their prizes--roasted shamo chicken and shamo curry.

Contest winner Yudai Kanno commented, "I am very happy that I won the contest because this is my last year in elementary school and my last opportunity to participate in Shamo Robocon. 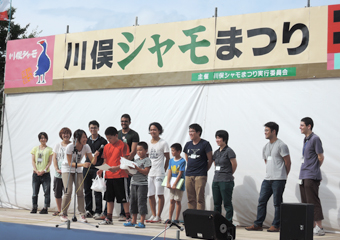 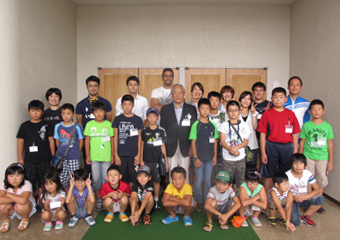 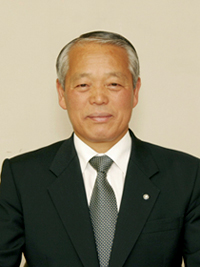 "I am glad we successfully completed the third Kawamata Shamo Robocon this year. Kawamata and Tokyo Tech fostered close ties over the years, but I am especially grateful to the student who came to Kawamata for an internship in the wake of the Great East Japan Earthquake and others who took the initiative to plan Shamo Robocon and continue to be involved.

In 2014, Tokyo Tech students invited students of Tohoku University and Fukushima National College of Technology to join the event, and they formed the Shamo Robocon Committe. The event has been recognized by the government as a relief project for municipalities impacted by the nuclear power plant accident, and Shamo Robocon became an official town project. I am very pleased that the relationship between Kawamata and Tokyo Tech continues to develop.

The students came up with a truly unique idea of combining shamo--our local specialty--with robot contest. They devise the rules, come up with storylines, and work together with children. I believe children see this process and get inspired to become engineers. The bright, promising children of Kawamata and our ties with Tokyo Tech students are an asset to the town, and we will continue to treasure them.

I appreciate Tokyo Tech's continued support for the revitalization of Kawamata and the students' passion for Shamo Robocon."

I was amazed that I could control my rooster robot with a remote control. I also enjoyed playing the balloon popping game against robots made by other people. After the contest, I made modifications to my robot at home and played with it. I will definitely join the contest next year, too.

I participated in Shamo Robocon two years in a row. The contest was even more fun this year. My sister, Miu, also participated this year, so we've been playing with our robots together at home. I will participate again next year for sure.

I was able to make my robot thanks to the friendly university student staff.

Planning and operating the event wasn't easy, but I felt that our efforts paid off when I saw the children have fun creating and playing with robots. It was also a refreshing experience as I could meet many new people through the event.

Seeing children have fun making robots and play the balloon popping game with so much excitement made me feel glad that I participated in the event. It was fun sharing with them the joy of playing with things you make with your own hands.

Shamo Robocon will continue to be held as an event of the Kawamata Shamo Matsuri in the future. Student Committee members intend to make further improvements to the event to help bring more vibrancy to Kawamata. The Committee is seeking new student members to plan the next contest.