The Royal Institution (Ri) Christmas Lectures have a remarkable history. First held in 1825 by Michael Faraday, a brilliant experimental scientist and pioneer in the field of electromagnetism, the lectures were intended by Faraday as gifts to children over the Christmas holidays. These experiment-based performances have continued for 190 years and are still held by Ri for reasons not unlike Faraday's — to stir interest in science discovery in both the old and young. Summer versions of the lectures first came to Japan in 1990, and Tokyo Tech had the honor of hosting them in September 2015. 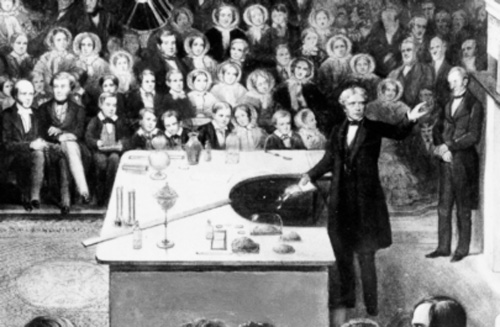 The experiment-based style of the Christmas Lectures allows the mind to wander and encourages creativity through active participation, concepts which have always been considered important at Tokyo Tech. A central goal of the Institute's new education system, which comes into effect in April 2016, is the continued development of individuals who contribute to society through their achievements in science and engineering. In this sense, the present-day Christmas Lectures, and their predecessors, act as models for Tokyo Tech. They show young men and women that science can be both intricate and delightfully satisfying, giving them the power to change the world as they envision themselves as students, researchers, and inventors. 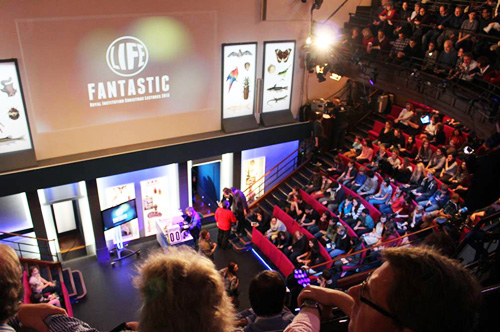 As the new education system gains momentum, Tokyo Tech plans to invite Nobel laureates and leading researchers from around the world to lecture at the Institute. To properly facilitate and maximize the impact of these lectures, the new Tokyo Tech Lecture Theatre (TLT) was opened in spring of 2015 on the Ookayama Campus. This was also the venue for the 2015 Christmas Lectures. 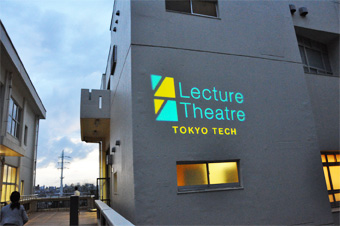 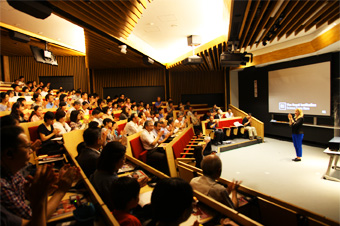 The Christmas Lectures at Tokyo Tech were a customized remake of Ri's 2014 lecture, Sparks will fly: how to hack your home. In an increasingly globalized world, people spend extended periods of time away from friends and loved ones. With the intention of bringing people closer during these periods, University of Manchester Professor and Ri Lecturer Danielle George set out to create the ultimate communication experience using all the five senses.

To demonstrate the transmission of sound, George reproduced Alexander Graham Bell's invention, the telephone, immediately drawing in the audience. Next, using simple tangibles like buckets, beanbags, and a flashlight, she showed how CMOS sensors in digital cameras function, and illustrated the principles of fiber optics and video transmission with a simple experiment. To transmit touch, George's assistant and Tokyo Tech student Michael Behrens, whose live image was projected onto a fog screen on stage, remotely controlled a robotic hand which the children in the audience could shake. An "electric lollipop" with two electrodes that stimulate taste buds on the tongue gave the ability to share taste, while a device attached to a smartphone produced a scent to further enhance flavor.

The tweaked historical inventions, cutting-edge technology, and constant experiments throughout the 75-minute lecture ensured that audience members, both young and old, were equally involved and intrigued. 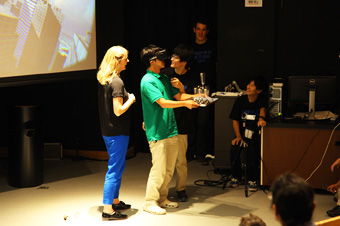 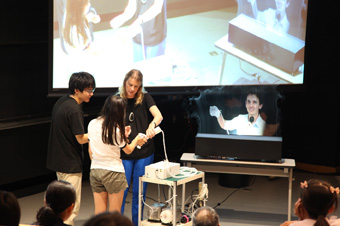 Transmitting touch with a robotic hand

When the performance was over, many of the children surrounded George and her assistants to ask questions, get a closer look at the experiments, and try out some of the devices. Feedback from the audience was excellent, with many commenting that their interest in science and experiments had increased. "The lecturer always felt so close, and we could all enjoy and experience the technology together," one audience member said. Some 20 Tokyo Tech students were also given a unique opportunity to assist in the organization of the event. They provided help from the very first rehearsal to the end of the actual performance. As the show ended, there was a sense of unity among the performers, the organizers, and the audience. 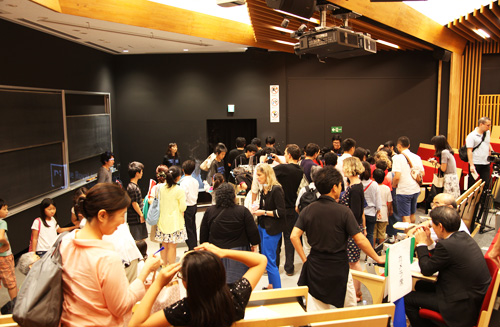 Excitement continued after the show

A gift that keeps on giving

At the very end of her lecture, George presented the audience with a challenge of their own. She pointed out that although the five senses had been transmitted during her show, many flaws still remained. It is the job of the next generation of engineers to improve the technology and thereby bring people even closer together, George pointed out. As Faraday did nearly two centuries ago, George and the Royal Institution left the youngsters in the audience with a gift that will keep on giving. 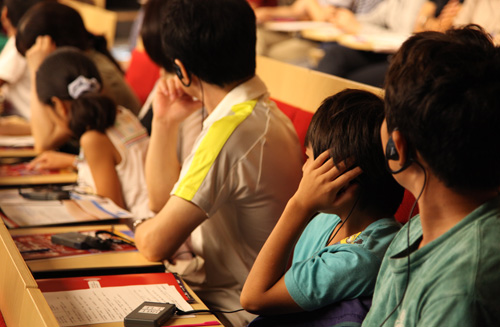