As part of its efforts to organize lectures by outstanding researchers in a wide range of fields from within and outside of Japan, and to introduce the cutting-edge research carried out at the Institute, Tokyo Tech has hosted the Inspiring Lecture Series since 2014. These events not only reinforce Tokyo Tech's research capabilities, but also offer young researchers and students valuable and exciting opportunities to gain knowledge that will help them further their own research.

The 2016 event — the third of its kind — was held at Tokyo Tech Front on October 13. Entitled "Materials open the door to future society," this year's lectures were given by Professor Hiroshi Amano of Nagoya University, the 2014 Nobel Prize winner in Physics, and Institute of Innovative Research (IIR) Professor Hideo Hosono, the winner of the 2016 Japan Prize, who both talked about the future of science and technology from their specialized viewpoints. 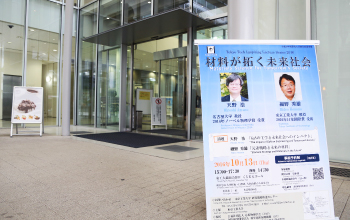 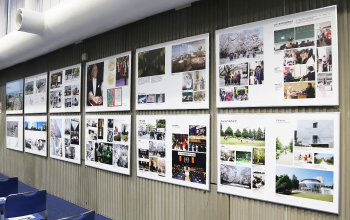 GaN engineering and its impact on the future
Hiroshi Amano
Professor, Nagoya University

Amano talked about his research on the blue light emitting diode (LED) and gallium nitride (GaN), which led to his receiving the 2014 Nobel Prize in Physics. After noting the countless failures that preceded his success, he went on to identify the benefits his research offers to society, as well as future issues and prospects. 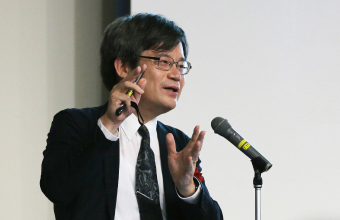 LED lighting has been highly regarded globally because it provides bright light for approximately 1.5 billion people around the world who have no access to electricity in daily life. Young Mongolians, for example, are abandoning the traditional nomadic lifestyle for the cities, and a great strain has been placed on infrastructure. LED lights and solar panels have helped to lighten this burden on municipal infrastructure. The popularity of LED lights as a key to energy saving continues to grow, and it is predicted that approximately 70 percent of lights in Japan will be replaced with LEDs by 2020. LED lighting is also expected to reduce energy consumption in the country by approximately seven percent. 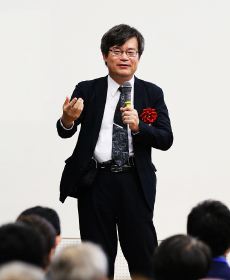 Amano has been engaged in research on the blue LED with his mentor, Isamu Akasaki, professor at Meijo University and distinguished professor at Nagoya University. The two dreamed about creating a display with the blue LED taking the place of the Braun tube, and as a result changing the world in anticipation of times when computers would be in more homes. To produce compound semiconductor crystals, Akasaki applied metal-organic vapor phase epitaxy (MOVPE) to GaN, a method which allowed a high growth rate and the ability to easily enlarge devices. These were significant steps towards commercialization.

In 1993, Shuji Nakamura — now professor at the University of California Santa Barbara — and his research group at the time succeeded in commercializing the world's first p-n junction blue LED, and applying this to smart phones had a drastic impact on systems and people's lifestyles. Currently, a number of companies are developing complete full-color LED displays. It is predicted that these new LED displays will increase the energy efficiency of smart phones some twentyfold. Amano believes that the accomplishment of full-color LED displays is one of the main goals in LED research and development. 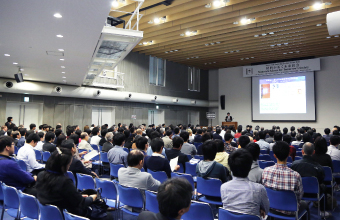 Today, Amano is working on solving Japan's low rate of energy self-sufficiency. Japan imports roughly 94 percent of its energy. Hoping to contribute to the creation of the super smart society1 included in the Basic Science and Technology Plan set forth by the Cabinet Office of Japan in 2016, Amano is focusing on material development. For example, applying GaN to power devices and transistors instead of the currently applied silicon can reduce energy consumption by 9.8 percent. In combination with the LED, it is estimated that energy consumption can be reduced by 16 to 17 percent. Amano expects GaN-based materials to play an important role in establishing Society 5.0.

What did you think of Professor Amano's lecture?

"Professor Amano spoke about receiving the Nobel Prize and his latest research findings. He highlighted the importance of having "an internal compass" to advance research and the need to keep up with changes in society on the road to commercialization. I recalled the high level of creativity possessed by researchers in the United States, and realized that I should be more conscious of the various experiences I have accumulated as a researcher. In addition to social contributions, I became acutely aware of how important it is for young researchers immersed in their work to broaden their knowledge by connecting with researchers through collaborations involving academia, industry, and government."

Hosono spoke about his approaches to element strategy. He explained his wide range experiences in materials development, guiding the students and young researchers in the audience towards broader horizons in their research.

Element strategy was born at the JST Hakone Workshop held in April 2004. Researchers use the term "elements" or "materials," but the real focus is actually on "functions." Hosono believes that element strategy is all about breaking out of the mold of conventional ideas, something he has done in the development of a number of materials, including IGZO2.

When Hosono talks about element strategy, ammonia synthesis utilizing an electride,12CaO・7Al2O3(C12A7), as a catalyst for ruthenium particles is an essential topic. A century after the Haber-Bosch process was developed in 1910, it is essential to have a process available that meets on-site production needs rather than the large equipment required by the Haber-Bosch process. To make this possible, simple degradation of molecular nitrogen was the key. Working in cooperation with Michikazu Hara, professor at Tokyo Tech's IIR, Hosono focused on the concept of injecting electrons into molecular nitrogen adsorbed onto ruthenium from the electride C12A7. In 2012, they succeeded in obtaining catalytic activity for ammonia synthesis at 350 degrees Celsius which was one order higher than that of the existing ruthenium one. Hosono believes that it is possible to synthesize ammonia under milder conditions in the future.

After his research on IGZO, an oxide semiconductor, Hosono worked on magnetic semiconductors. In 2006, he discovered a superconductor whose main component was iron. With a low transition temperature of 6 K, the discovery was something that conventional wisdom at the time did not understand. However, in 2008, the addition of fluorine increased the transition temperature to 26 K, prompting other researchers around the world to start research on iron-based superconductors. It was suddenly understood that these superconductors were characterized by their strength against magnetic fields, and research and development progressed.

Hosono also utilized materials informatics3 to search for substances that could exhibit a red luminescence without using rare elements, and it was Professor Fumiyasu Oba and Associate Professor Hidenori Hiramatsu at Tokyo Tech's Materials Research Center for Element Strategy that succeeded in achieving this in a new nitride semiconductor. This achievement verified that materials informatics based on cutting-edge computational sciences accelerates material research. Hosono is confident that this new method is extremely useful for materials development.

The professor ended his lecture with some advice for participants: "To develop new materials that can take the world by storm, young researchers in particular need to broaden their perspectives, and avoid focusing on materials only. If you keep trying without giving up, you will see light at the end of the tunnel."

What did you think of Professor Hosono's lecture?

"Hosono is an expert in materials science who has achieved brilliant success through interdisciplinary research. He has developed a new field of oxide electronics, has synthesized electrides stable at room temperature utilizing cement and applied them to ammonia catalysts, and has discovered an iron-based high-temperature superconductor. During this lecture, I learned that Hosono's success in the sublimation of materials is due to the fact that he does not limit himself to engineering approaches such as interface control, a common method in the field of materials, but instead explores issues from a variety of angles by utilizing crystallography, solid state chemistry, and condensed matter physics. I think this lecture provided students and researchers with great stimulation and encouragement to explore a variety of fields and methods in their search for new materials."

GaN power devices and semiconductor materials are artificial materials developed by human beings, and we can all see these materials changing the world in the near future. From the viewpoint of sustainability, it is important for us to use commonly available materials rather than rare resources for such development. Although the materials used by Amano and Hosono are very different, it is not difficult to see that the two men both possess a broad vision that points in the same direction — a future where researcher networks are utilized across disciplines to apply research findings to the realization of an effective and comfortable super smart society. The excitement instilled in participants during the lectures, especially the students, will surely play an important role in realizing such a society.

Also known as Society 5.0, this concept was included in Japan's 5th Science and Technology Basic Plan approved in a Cabinet meeting in 2016. The plan defines a super smart society as "a society where the various needs of society are finely differentiated and met by providing the necessary products and services in the required amounts to the people who need them when they need them, which enables all people to receive high-quality services and live a comfortable, vigorous life while making allowances for various differences such as age, sex, region, or language."

Materials informatics applies the information processing capability of computers to materials science in order to perform effective high-throughput screenings of materials utilizing computational and data science methods and combinatorial synthesis and evaluation, and to establish material design and search guidelines.